“If only the event was run on Saturday morning” mused the OldVelos team manager as he fielded yet another call from an excusing cyclist.  That morning he had the makings of two teams for the prestigious, if quirky, 37 mile Earthquake Team Time Trial.  That is until Met Eireann stepped in.  Burying good sense beneath his temporal lobe the manager furrowed his brow. “Why don’t they understand that 70mph gusts could be the making of our triumph?”

The remaining riders were now the team, but with a twist.  John Shanahan’s ace tandem pilot had selfishly broken his leg playing a foreign sport and as both his subs were riding on the team there was only one thing to do, bring him and his modern tandem into the fold for Peter Meaney to pilot.  We could use its flat and downhill speed to the advantage on the team.  The remaining places were all OldVelos including Brendan Hennessy’s shining 1970’s Alan; Tom Mulqueen and Sean Walsh’s colourful 80’s MBK and Viking and Aidan Reade’s very special former Sean Kelly Vitus low profile.

Aidan, from Black Rose Racing, came down from Galway to join the team.  Tom and Sean came from de Ronde van Cork.  Brendan Hennessy, John Shanahan and Peter Meaney were all Midleton CTC locals, but that didn’t stop Peter coming down with a cold.  On the morning of the race the teams huddled in the warmth of the event HQ as Met Eireann ushered in the storm.  Our competitors looked on in hushed tones as the OldVelos team undertook their specially tailored warm-up routine – squeezing their over 40’s bulk into under-14 team woollen jerseys.  More super corsettes than super corsa.

Once on the road, the peleton of would-be rivals bantered lightly to the start line in Killeagh – a useful warm-up thanks to ongoing roadworks.  It was then Peter sneezed and revealed he was TUE’d up to his eyeballs on paracetamol.  It is unclear whether it was the size of the sneeze or our elegant sky blue jerseys but the suspicions of the starter was raised when he saw our Black Rose Racing team van.  “Is that your van?” Yes.  “Make sure you keep it behind you”. Sure. “OldVelos three minutes to start”.

Team Time Trials are about communication, cohesion and control.  Up to this point we had none of the above, but once the team was introduced to each other at least we had the first ‘C’.   Once started in earnest we were going to have prove the other two.  We all knew the westerly gale was going to do wonders as far as Youghal and the tandem was specifically told not to go to the front of the formation until we found our rhythm.  Aidan took the lead, his low profile position the epitome of control.  He swung to the side leaving Tom and Sean take their 30 second turns, each easing back to the rear-guard in gentle cohesion – we had already achieved ‘C’ 2&3, were speeding up and looking good.  It was then, as Hennessy swung to the side, that a crack appeared in the cohesion, the tandem was, most unusually for Peter and John, struggling.

As the Youghal bypass climb came into view the tandem duo knew their first test was in front of them.  A regular pairing, they can usually seamlessly stand, sit, push and spin the limousine in gravity defying deftness.  Today gravity got the upper hand and what would often be considered the telepathy of tandem riding became shouting, grunting and cursing.  Once over the top the tandem played to its strengths and took to the front and the team regained control and cohesion as the pair heeded the command and kept the speed to 40mph.  But downhills are brief and it was clear as the upcoming Tallow climb glowered down at us that the team needed a Haugheyesque ‘Tallow Strategy’.

There was still 1500 feet of climbing ahead and we had just been passed by another team.  Tough to take in the first quarter of the race, but this event was in aid of a charity ‘Time for Tilara’ and let’s face it six grown men toiling in a team time trial is just two hours of Tilara’s young life.  All the competitors and sportive riders at EQ17 were there to support essential surgery and, bragging rights aside, we knew what we were doing.  But, put two cyclists beside each other and they’ll brag anyway, we just had to be inventive.  The ‘Tallow Startegy’ was an understanding that the imposing hills would not oppose any pushing or pulling undertaken by the team in OldVelos interest.  The resulting arrangement did not win the race for the team, in fact it is unclear if the team will stand for office again, but the team worked.  Which is why when OldVelos received the prize for Classic team we had to admit our competition was illness, weather and ourselves.  And we won. 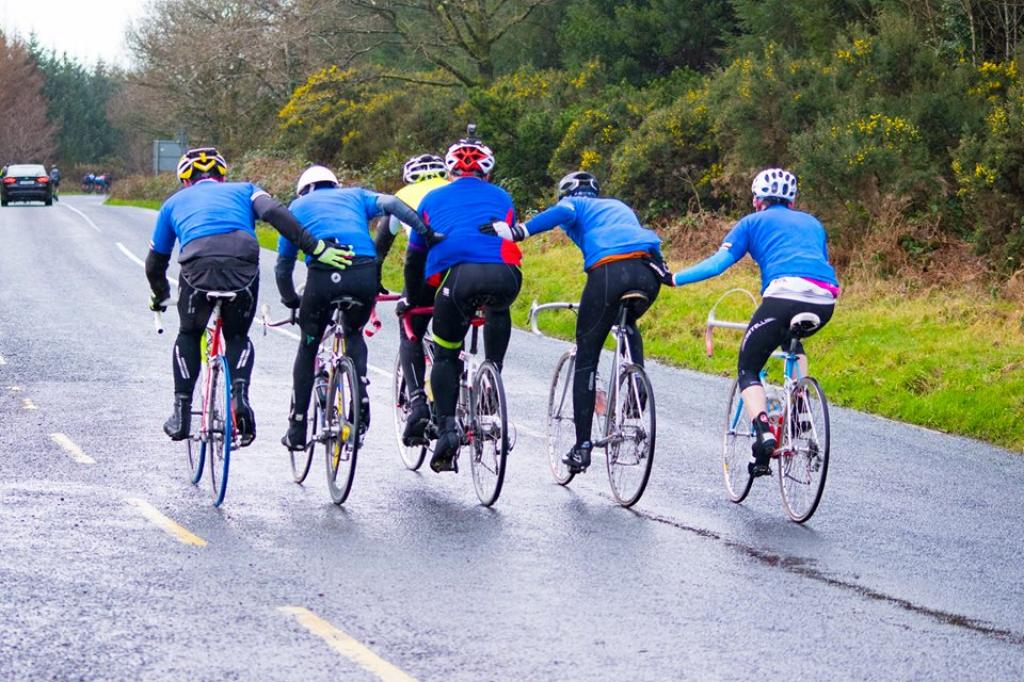 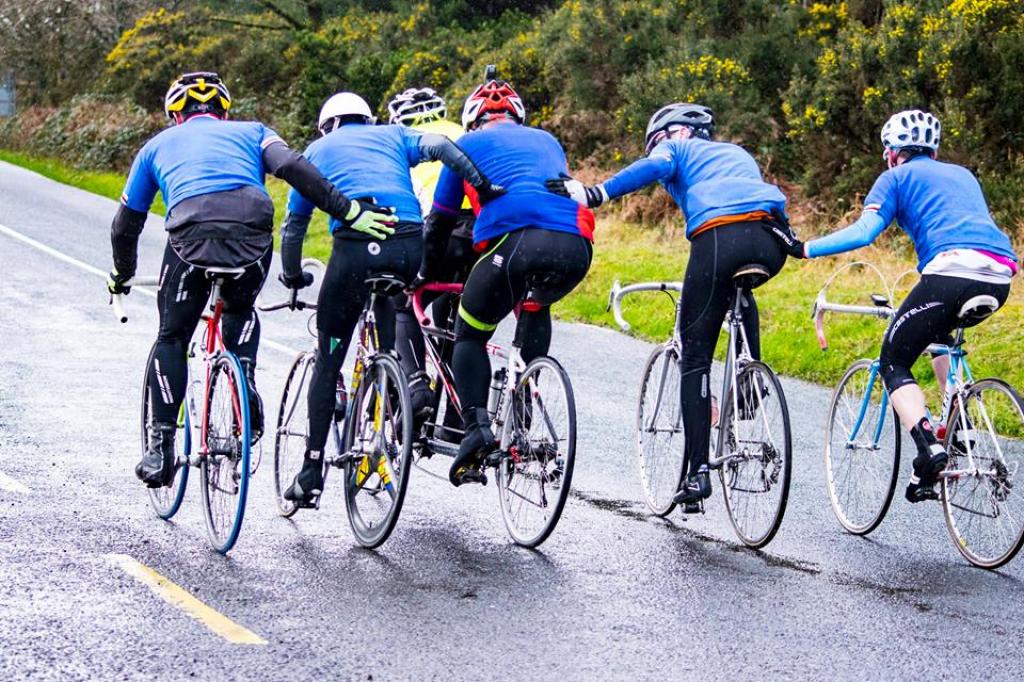 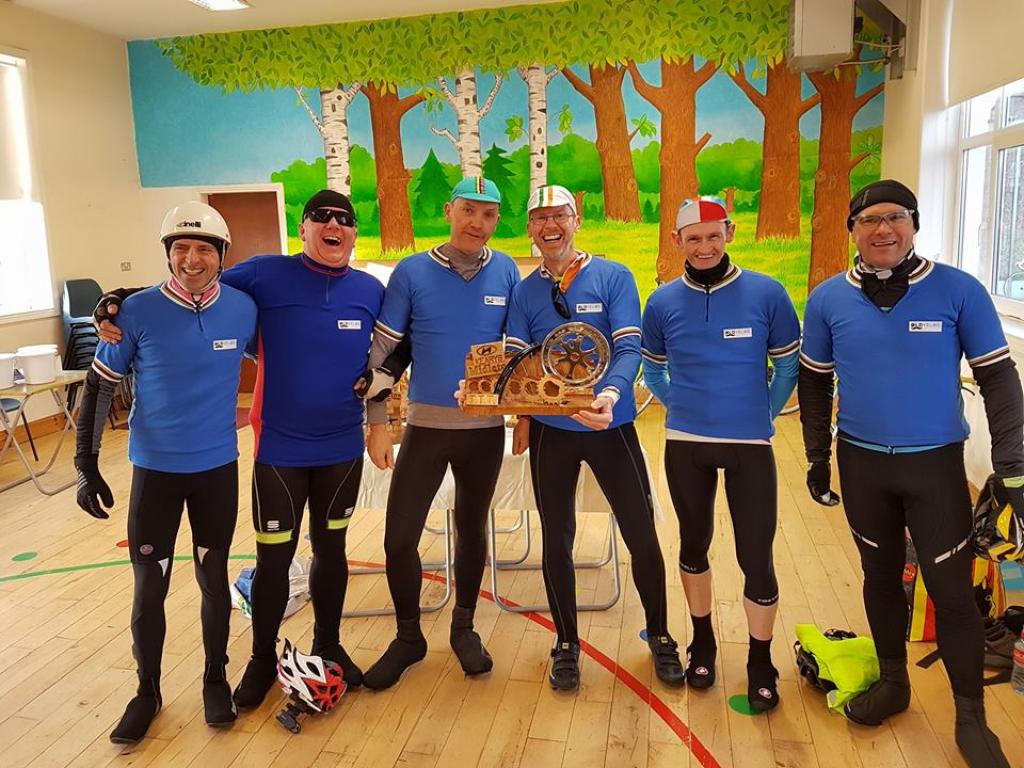 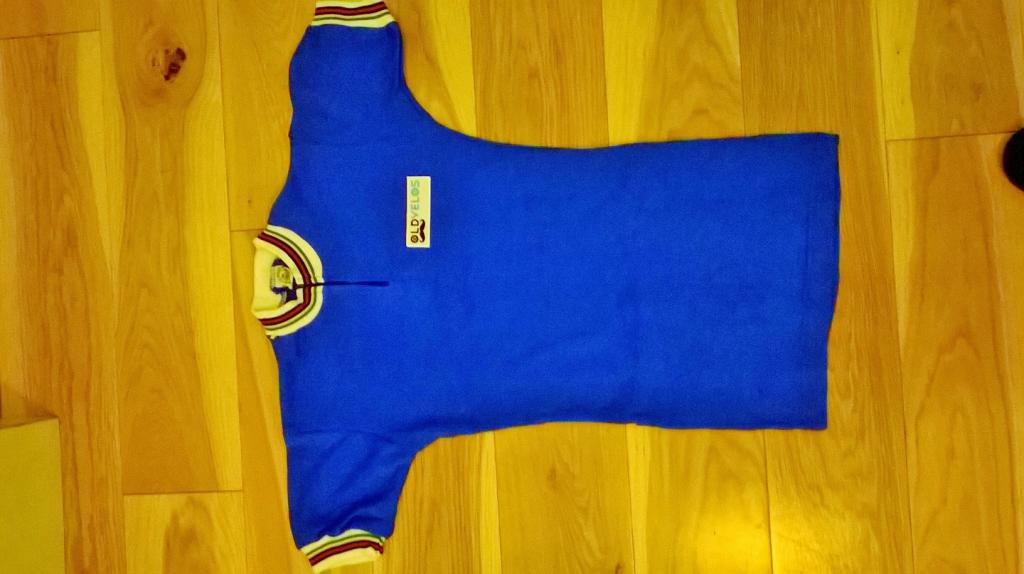 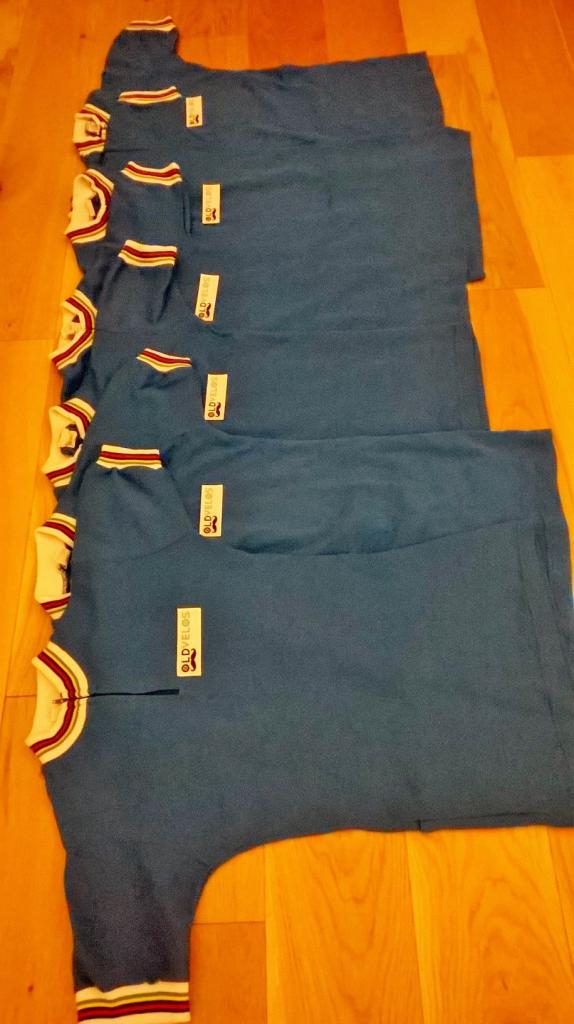