(Noun a long, narrow opening or line of breakage made by cracking or splitting, especially in rock or earth.)

To the people of Upperchurch and Drombane ‘The Fissure’ was always there. How it came to be was often a matter of debate on dark winter nights in nearby hostelries. Some said it was created by the collapse of an old riverside holt, but the more imaginative insisted it was an act of God and even the muse of a poet. However it came to be, it deserved respect, demanded it from all, all but one, that said.

How to find it? Clip in and follow my tracks. “This way please. Under 14 and 16’s riders to the back of the B’s. Likewise the A-race ladies. B Group riders pedal forward, follow me”.

Inside the barriers we go, earlier this was a veritable circus ring where the enthusiastic under-agers pedalled their hearts out. Swing left and then over the foot tall step onto the forgiving mire, now a muddying battle ground. Goggles preferable than spectacles. No matter, it is impossible look good in these conditions. Sharp right under the view of metal roofed sheds through a muddy gap only a farmer would call an entrance. Weave around the tape on a falling field and through a makeshift gate formed by pallet and pier.  There by necessity but undoubtedly built with pride. Pits to the left, with children and buckets and brushes. Not far now.

A rush. There’s something about the way the straight line track entices speed. Double click go the right hand SRAM levers of single chainring top of the range carbon CX bikes. The left hand pulls the bar end lever on the vintage bike. Muffled by mud the chain on the vintage bike eventually climbs onto the big ring and the speeding machine accelerates and acquires double digit MPH. For what, to overtake, a pretence of racing maybe,a personal myth? Let legs be legs for now as shortly the straight will slip into a right hand slide, feet now ready to unclip and quickly clip back in and urgently prepare mind, body, bike, gears for the left hand dive. 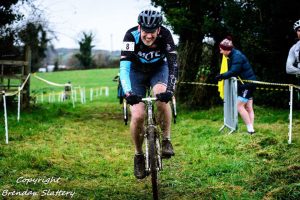 A friend spoke recently about ascending the Arc de Triomphe to marvel at Paris and view its boulevards and bustling crowds. Looking down on the roundabout far beneath to his horror he saw a cyclist, long flowing skirt, no helmet, with a wicker basket. He saw her cycle into the six lanes of congestion with all the vulnerability of a tethered lamb amongst a leash of foxes. He averted his eyes. Much the same way the two first-aid volunteers looked away from what the left hand dive was about to reveal. This way please. One at a time preferable, but not always possible.

In the fissure a single bubble of air formed, a timeless sphere trapped underneath the detritus that gave birth to its creation. It sought out its likenesses, attracting the final breaths of dying leaves, catkins and tiny carcasses. It grew. Deep underneath forces worked, subtle movements of mud, rock and slime. The feet of onlookers protected by Wellingtons, made indents as butterflies’ wings make hurricanes. The bubble heaved its molecular moorings and ascended, all the time seeking and receiving its resemblances. Not even the noise of bells ringing, bicycles thrashing and cyclists cursing could drown out its eventual dirty gurgle. The onlookers could see the fissure was deep.

The racers wheels sought out the indents of their previous incumbent’s tracks, their riders eyes sought out the traps. Yellow tape means warning, yellow paint says hazard. Hay bale spelt potential disaster, possibly a swim.  A few well-wishers had formed around ‘The Fissure’. Some knew it intimately after navigating it in the B race or from watching it show no mercy or simply knowing what it could do. Like fracture an ankle. The atmosphere rises to a frenzy as single riders or pairs prepare for the descent. Brake hoods held in a vice like grip, more modern shifters like bullhorns. Split-second decisions of speed, traction and direction hurl riders pin-ball like through the trees and over a gulley and ever nearer to the rim of the overflowing, magnetic and deep fissure.

The fearful, the fretful, the careful, the sheer slow all avoid the quagmire. Just how deep it is they do not want to know. The walkers, the heavers, the pushers and pullers, even the shoulder hoisters, leap over. Fear a compass for better ground. The daring-do, first gear firm pedlars shoot around nourishing the fissure with more mud and open its sides further. We’ve accounted for most by now my friends. But of five left here’s the three who succumbed: Birchall, Fuller and Meaney. Paul Birchall fearing being caught simply went straight in, Revolution by club, revolution into nature, wet from teeth to feet. Shane Fuller, doomed from the start in an unforgiving pact served mainly on Strava, fulfilled a fortune already told, and finally, Peter ‘pretty boy’ Meaney, claimed it was all in aid of healthy skin. All finished the race, all heroes. 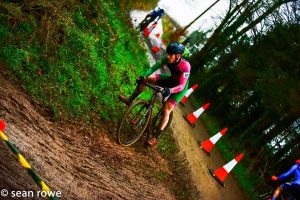 Step in please, there’s someone coming through. The bells ring shrill. The first-aiders cringe. Tyres gorged with mud spew a fountain of debris. Leaves scatter, tree stumps shudder. Flashes of colour, pink and green, between branches, brambles and forestry. The low mound dispatched not with finesse but force, tyres not gripping for traction but forced into continuous forward momentum. The fissure revels in its fortune for another victim.  Yet the fissure is not feared here, barely acknowledged, disgorged with the determined dip of the head and shoulder of Richard Maes, race leader. The onlookers gape amazed and move further back from the tape.

Slowly, the muddy contents drain back in, the dangers restored from sight, the fissure resumes its significance.  Another rider comes into sight.

To end, poetry play, and a word of salute to worthy Brendan Coakley who has left our emB-race for the A- race… where Richard Maes et al await!! Big thanks to Upperchurch Drombane CC for a great event and of course, the Fissure. 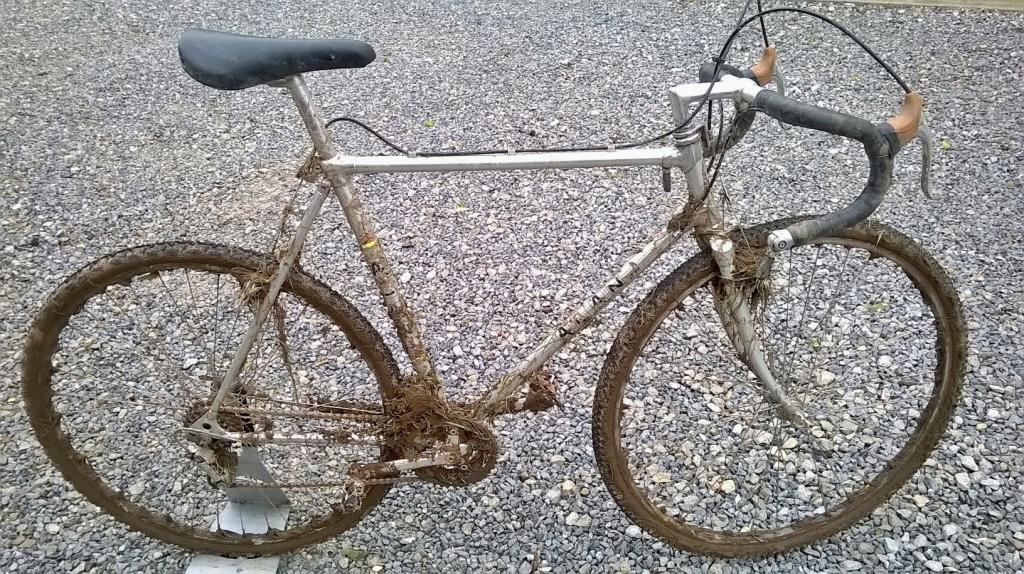 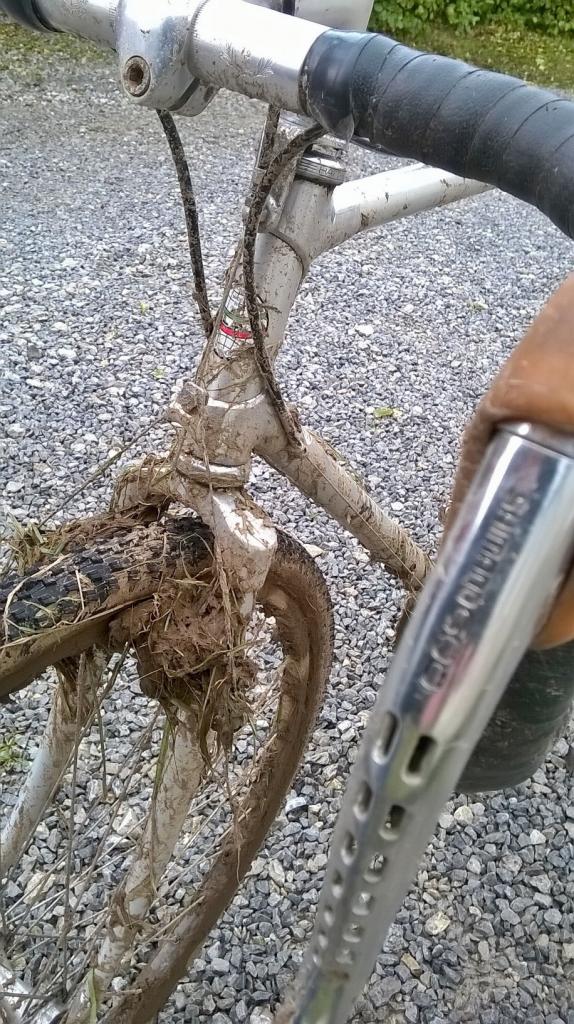 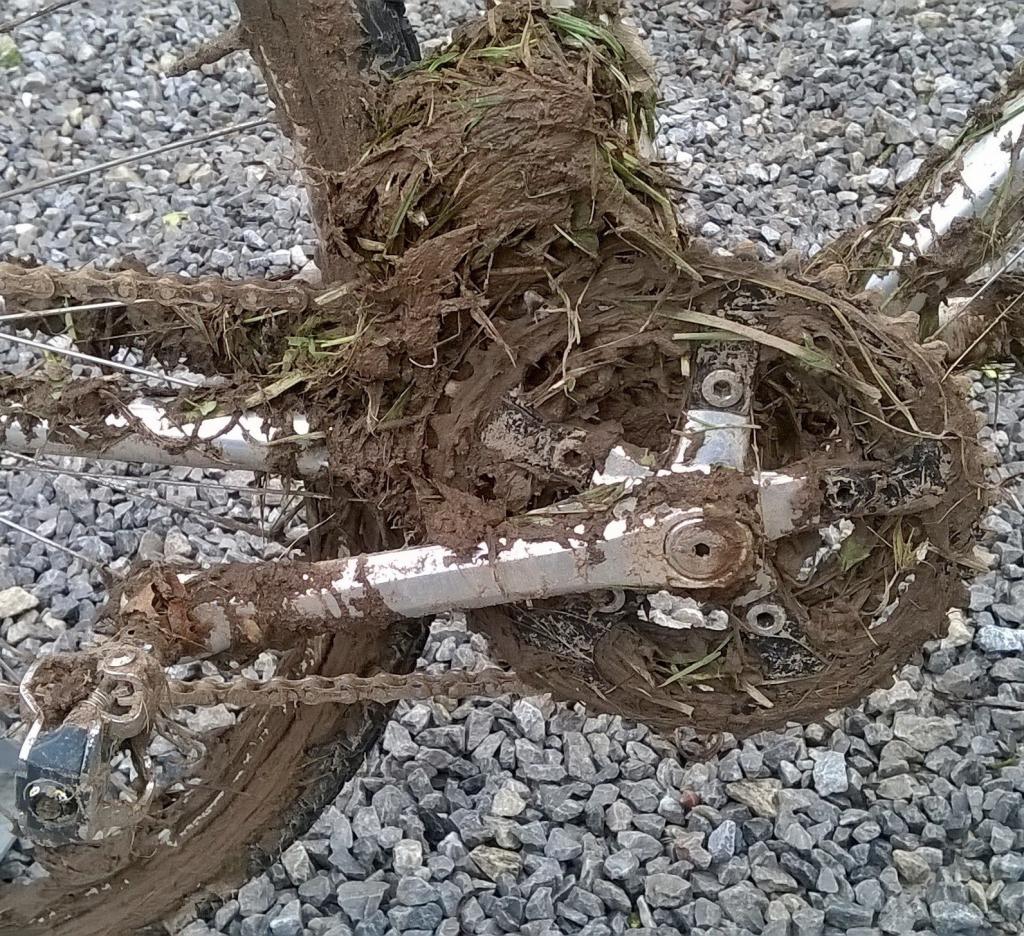 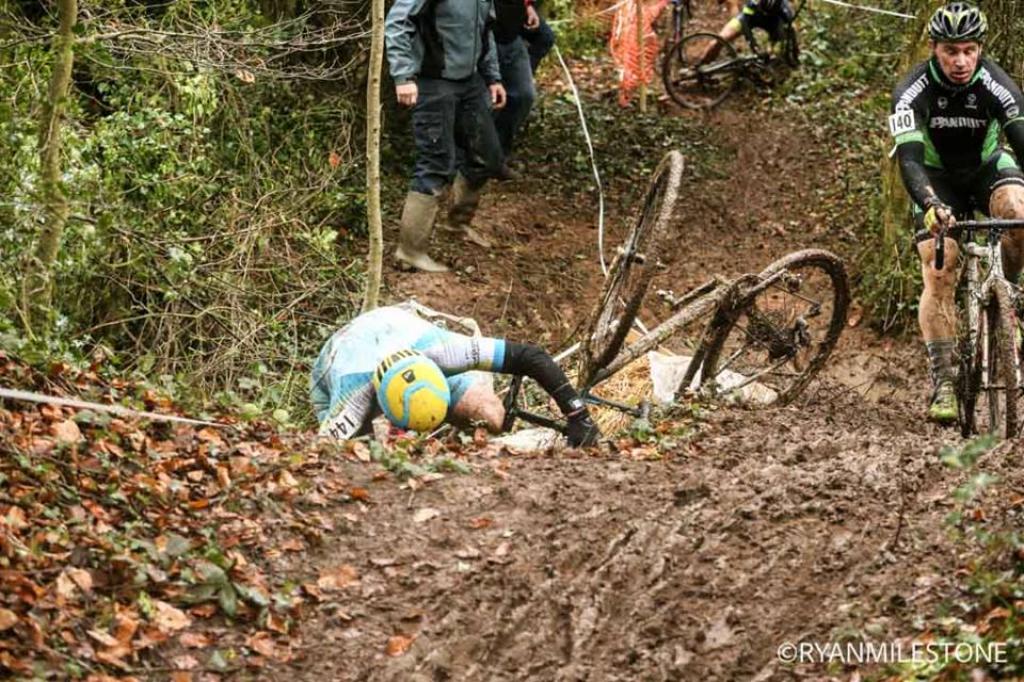 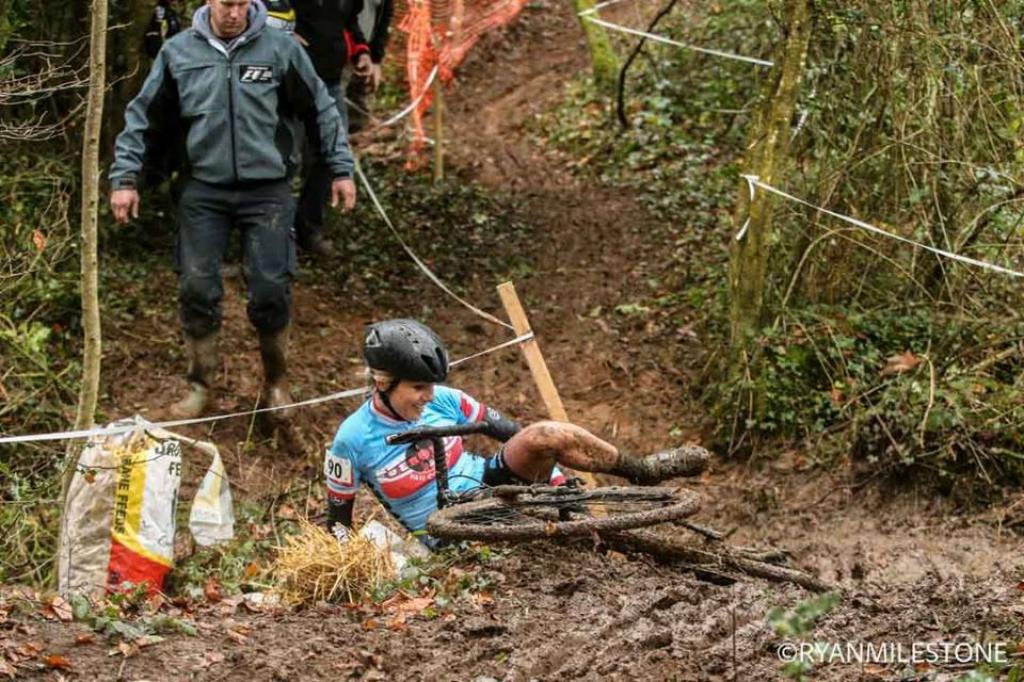 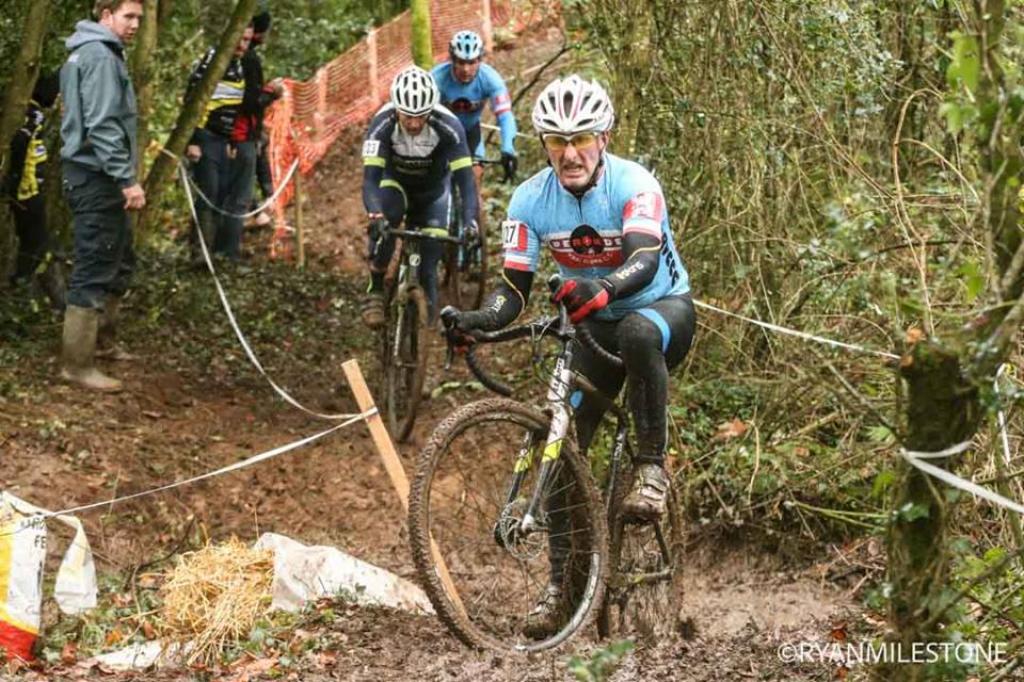 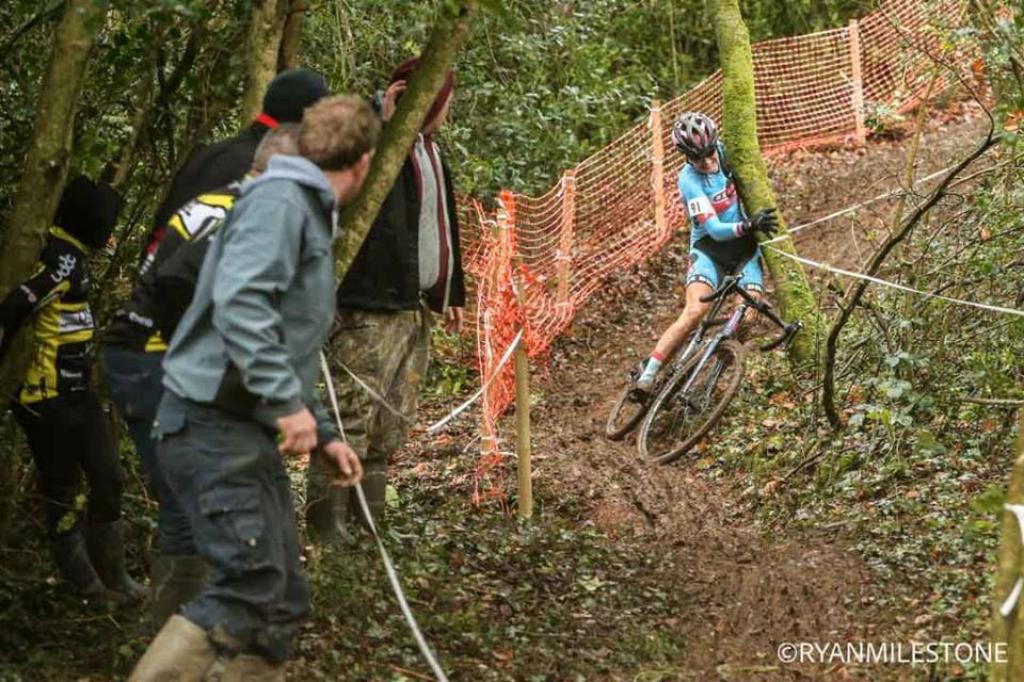 The water rushed, the water rose 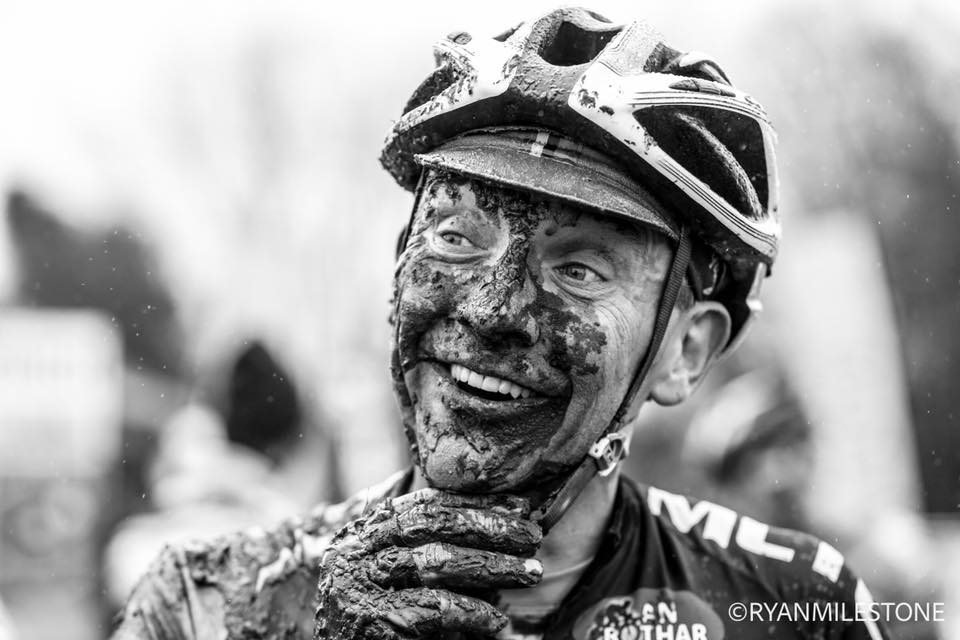 And wet his naked feet;

His heart with yearning swells and grows,

As when two lovers meet.

She spoke to him, she sang to him,

His fate became quite plain:

Half drawn by her he glided in

And was not seen again.