The Funnel at UpperChurch Orchard Cross 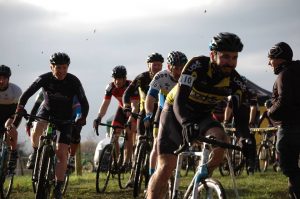 Michael Cahill had been hoarding reasonable results these last few league races, but when the Munster race came to his home place he really coveted a good one.  His ambition lay in part due to his recent good form, only a slip here and a slip there had cost him places, but most of all it was because UpperChurch clubmate Jerry Ryan had offered him some course tips.  “IN-CIDER tips” Jerry had laughed.

Jerry Ryan had promised the Munster League a new course after a local cider maker had misread a trade magazine extolling the virtues of “kegging product in five cycles before funneling” and asked Jerry could he oblige by getting some cycles. 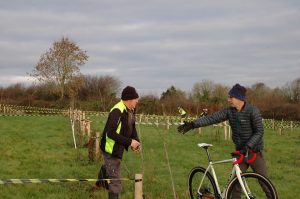 By the time he realised his mistake Jerry had already made up the Orchard Cross cyclocross course in Upperchurch-Drombane with cyclists barrelling around the apple trees at least 5 times, with a funnel to boot.

The Funnel was more than just a narrowing in the pipeline.  True, it was just a meter-wide gap between what felt like a prairie behind and a field in front.  There was space everywhere except here.  In fact, there seemed to be more space under the funnel than across it.  This was filled with muck.  No wheel could turn in that muck, whichever way you approached it you left on the same trajectory, even if it wasn’t where you wanted to go.  Oh, cyclocross for this stuff I hate you, but I love you really. 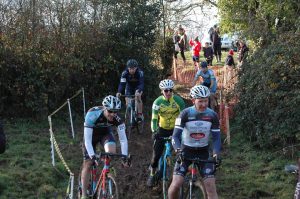 The Funnel occurred at a decisive time and place in the course so that the race may just have stopped there.  Whoever got through first, on bike, on foot or on their knees was always going to do well.  But then we would never have got to meet each other coming past up and down the farm track.   Nor would we have imagined the life of the family that used inhabit the old farm house.  Neither would we have continually and persistently thwacked that one awkward branch in the orchard.

There were so many new faces at this race, and wide bars a plenty.  Who ever knew there were so many ATB’s in Tipperary?  That wasn’t going to help easy passage through the Funnell.  I had seen Pat Breen snake through it earlier in practice.  I began to wonder about the extent of the in-cider jokes amongst the Tipperary men.  Pat and Mike approached Jerry. 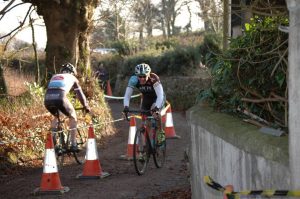 “Heh Jerry, what’s the story with the Funnell, go on tell us?”

“Hi, that’s easy, as you approach keep your handlebars turned to that gap in the Galtees, there’s a stream underneath that’s keep you straight.  It feeds the fissure from last year.”

Pat shivered at the memory of the Fissure, he had nearly lost his dashing good looks to that ravine in 2017.

“What’s more though Michael, don’t take the inside line.  There’s a dyke at the bottom of the ivy.  Just wait till one of the Cork boys tries a fast one on you”.

The whistle went and so did we.  Our group hurtled out of the traps and through the prairie.  We were all making our choices.   The daring hurtled headlong toward the gap, others purposefully hung back expecting to have to dismount and by doing so dislodging some opponents, others waited the inevitable, running with their bikes even before their opponent’s brakes screeched.  Me, I stuck to Cahill’s wheel. 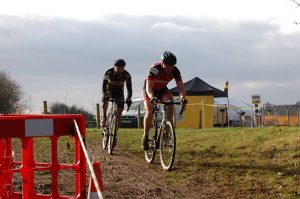 And what was on his wheel sure as hell stuck to me.  Little bits of Tipperary shot through the air and on to my face, my eyes, up my nose.   But when on the last lap a ball of dirt made its way into my mouth, I gulped it down, licked my lips, and said ‘race on’.  Cahill may always best me, but it ain’t the end of me.  One lap left, here we go so.

I had learned at the start line that while the ground was hard the best line was through some of the softer scrub.  Cahill, stronger on the straight, kept to the path and while he thought he may have been getting to the turn before me, didn’t count on me getting the right line and popping up beside him on the lane.  It was too narrow here to overtake leave alone ride side by side, but I wasn’t chickening out now.  Michael was probably expecting I’d brake first, but when there was no discernible deceleration in my pace he had no choice but to cede some space.  It was too late now to worry about losing grip on the rough surface, it was time to commit.  Michael wasn’t letting up though.  He was so close to me I couldn’t afford to brake as we’d both go down, so I gave a little extra special push on some dislodged grass with the hope I’d exact some crud revenge.  “Pffhuh” I could hear from behind. I drove on toward the funnel, less pressure from Michael made a better chance of a considered entry and a quick exit.

Micahel had other plans though, clearly riled he had chased me right down to millimetres between our tyres.  Was that a tyre rub or had I pulled my wheel. Michael’s brake screeched, I heard him curse, no wheel had pulled. He really wants this I thought.

Now as we approached the Funnel I did consider it differently.  In my mind I conjured up a Formula One chicane, yes there’s a turn but really, it’s a straight.   The mistake would be to approach it as a narrowing, worse again to pull the front brakes.  If I slowed down Michael would rear end me again anyway. 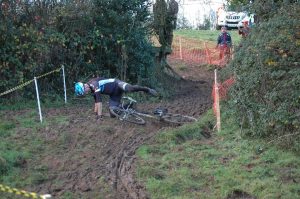 I could hear the crowds’ shouts around the funnel, our race within a race was propelling us towards the front runners, but I had to concentrate on our battle.  If either of us lose momentum here we could really rue the day.  “Here they come” someone shouted from the crowd.  I was not dislodging Michael, but I was pretending to myself that I wasn’t worried about my speed.  I was first to the turn, pointing my wheels toward my imagined new racing line.  In slow motion the grips on my tyres were losing traction, a front wheel, then handlebars then Michael came past me as I bottomed out under the ivy. I looked up into the crowd. I couldn’t really make out their faces, all I could hear was Jerry shouting “look at the The Galtees Michael and get Pat Breen”. 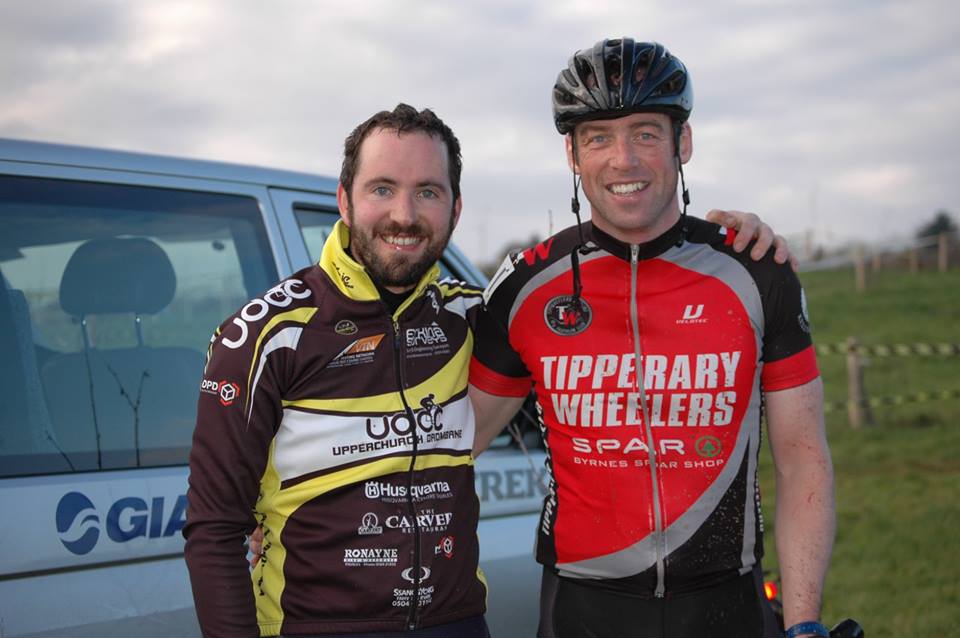 Delighted to be part of it. Dmitry, my 12 year old son, END_OF_DOCUMENT_TOKEN_TO_BE_REPLACED

Great weekend folks. First one for me, wont be the last and END_OF_DOCUMENT_TOKEN_TO_BE_REPLACED

Just wanted to say thanks for last Saturday, really enjoyed the day, END_OF_DOCUMENT_TOKEN_TO_BE_REPLACED

Of all the cycling events I have participated in, this one definitely END_OF_DOCUMENT_TOKEN_TO_BE_REPLACED

I started a vintage bike project during lock down, It's  a1986 vitus END_OF_DOCUMENT_TOKEN_TO_BE_REPLACED

Seeing a mutual love of self propelled two wheels, I jumped in END_OF_DOCUMENT_TOKEN_TO_BE_REPLACED