I know little of the art of ‘transition’ to Ironman cycle from swim.  I even had to phone a friend to find out how one came out of the water.   Despite sustained inquiry, “wet” was all I got.  However, I do know a lot about running on the sand of Claycastle Beach, albeit mostly with cyclocross bike in hand. 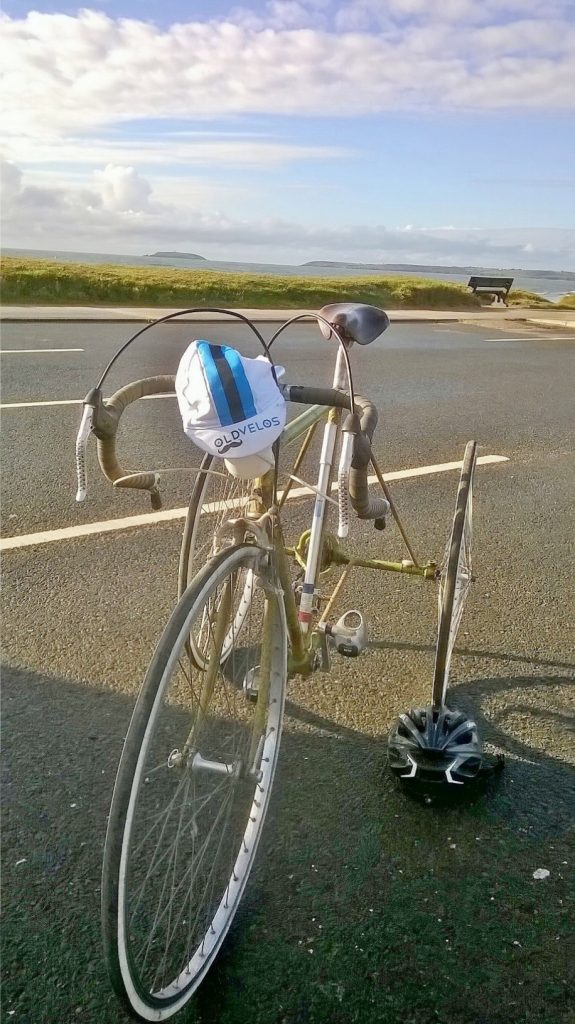 The first thing you need to know is its very sandy.  Second, it’s a surprisingly long run from tide to tarmac.  Third the jump from the sand to the ramp has an equal relationship with fatigue.  Very tired? Big leap.  Finally, descending onto the beach from the dunes leads to an inverse relationship with your bicycle.  Believe me I tried. Nearly died (of embarrassment) as bike and I parted company at Youghal Cycling Club’s first cyclocross race.  Maybe it’s because of that memory I took my trike to the beach today. 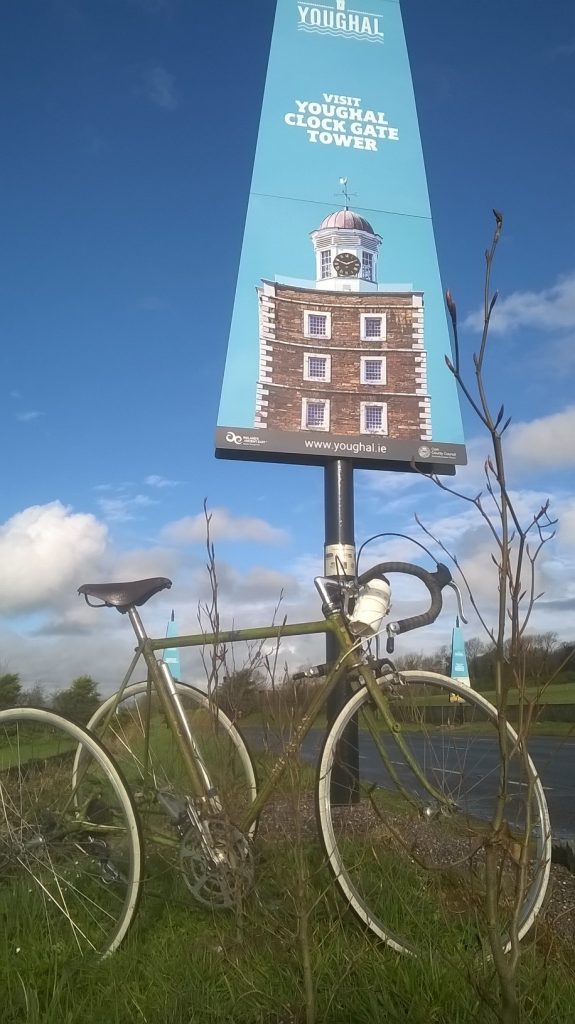 Your friends at Youghal’s Ironman HQ iTriCoaching.com have chosen a more gratifying exit from Claycastle Beach for you.  Leaving the main gates you reach down and tighten the clasp on your shoe, composing yourself, you feel the last salt droplets tickle the sides of your neck.  Standing on the pedals you stretch your sea-legs over the humpback bridge that spans the defunct railway.  Turn left, it’s time to start this 112mile thing. 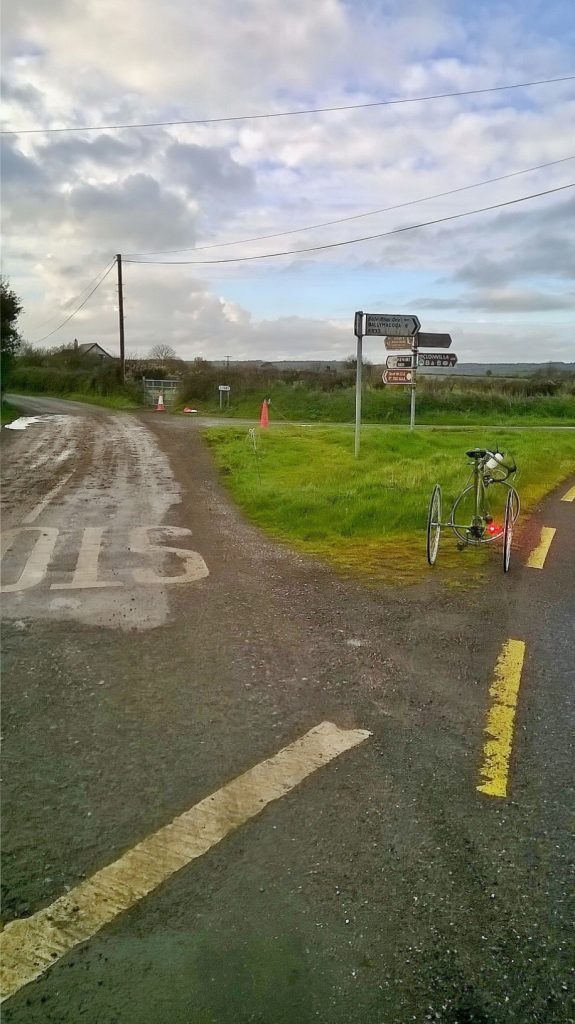 The first exact mile is on clean well smoothed asphalt.  Just what you need as you get into that cycling position you’ve been trying out.  What did the coach say, or was it internet advice, or just common sense. Yes, that’s it. Breath. In and out.  Metal standard bearers mark your way.  I can’t say now what will be fluttering on the 23rd of June, but last week it was a picture of ‘Youghal Clock Gate’. You’ll be passing that 4 times later in the day. Aha, here’s another left.  Time to find out ‘is it true’ about Irish roads. 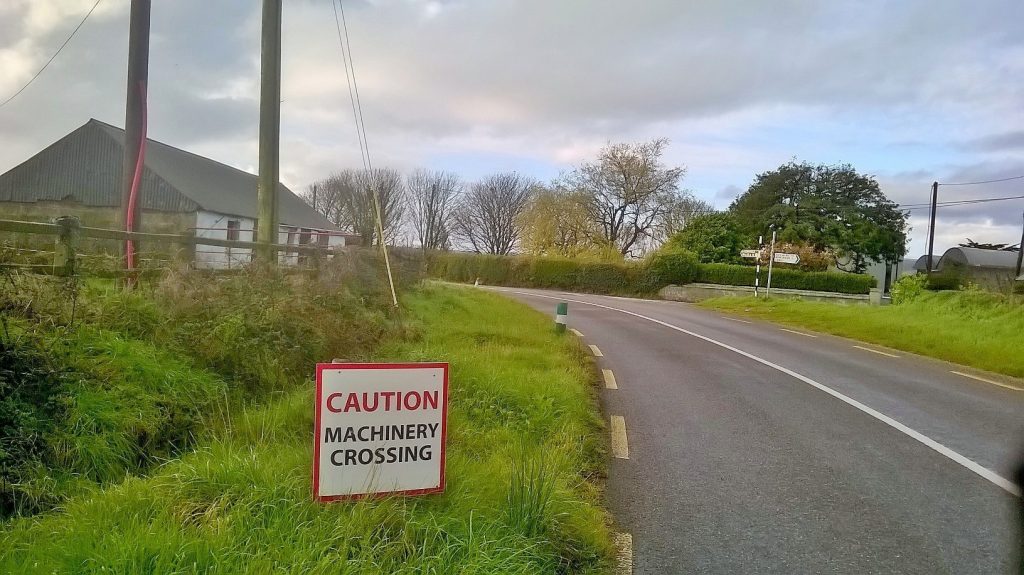 A long straight, a little more than a mile, introduces the road surface that serves you for most of the day.  The sun, in my mind shining, will leave dappled shadows on the road as the warm summer smells waft in from the shore.  You clear your mind of the seaside din, already a memory from two and a half miles ago.  The road swings right when suddenly there’s an assault on your senses.  Your brain doesn’t recognise the signals your nose is sending it.  “Man that is bad!”.  That’s not man, that’s manure.   You can nearly smell it off the photo.  Time to keep on movin’ on. 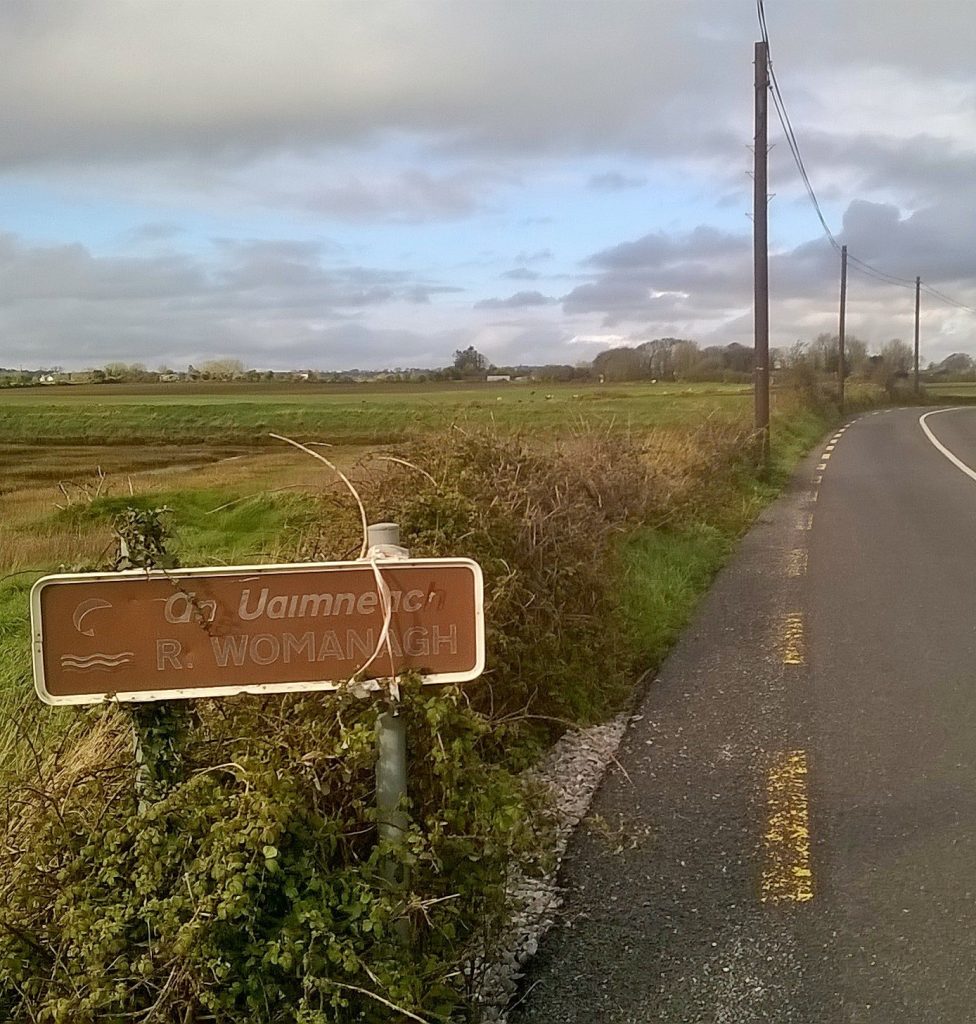 Past the farm and its ‘machinery crossing’ sign – don’t worry I’m sure they know you’re coming – you’re beginning to eat the miles.  It’s all very flat as you pass the marshlands and the intriguingly titled Womanagh River.  The sign, in Irish, also reads ‘An Uaimneach’, a distant derivative from the Gaelic word Fuaim, or noisy.  I have my doubts, as out here you’re in peace and quiet.  Another mile or so and you’ll be heading for Ballymacoda, by then you’ll be six miles in. 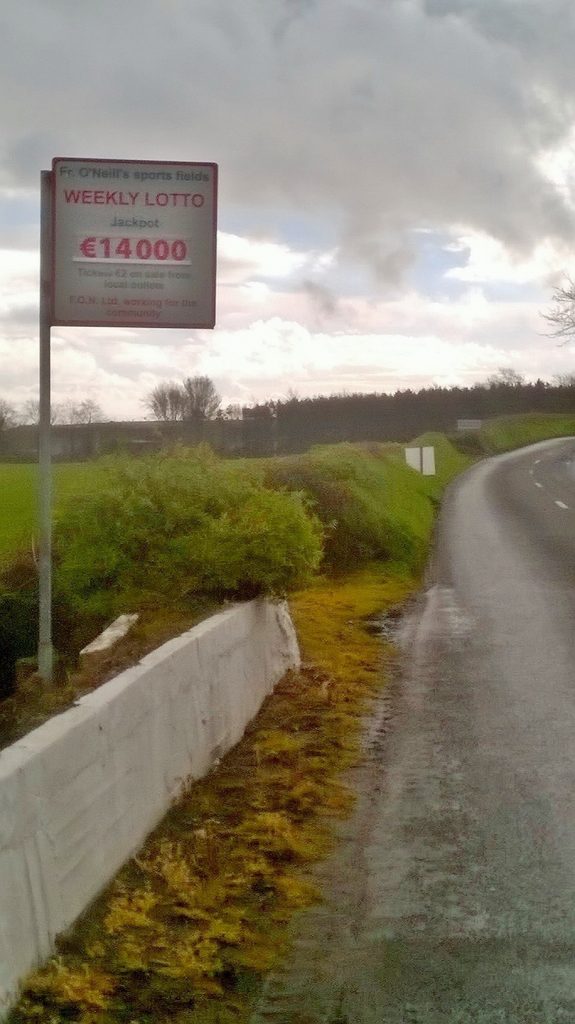 There’ll be a few drags through the marshalled junctions but nothing really to offend you.  Once the straight’s in sight your luck is in.  For just €2 you may be the winner of €14,000 or more.  Signs like these are testament to how local communities keep our amateur national sports amateur.  What does the sign mean to you?  That you’ve a fast mile of flat through the village of Ballymacoda and then a fascinating distraction. 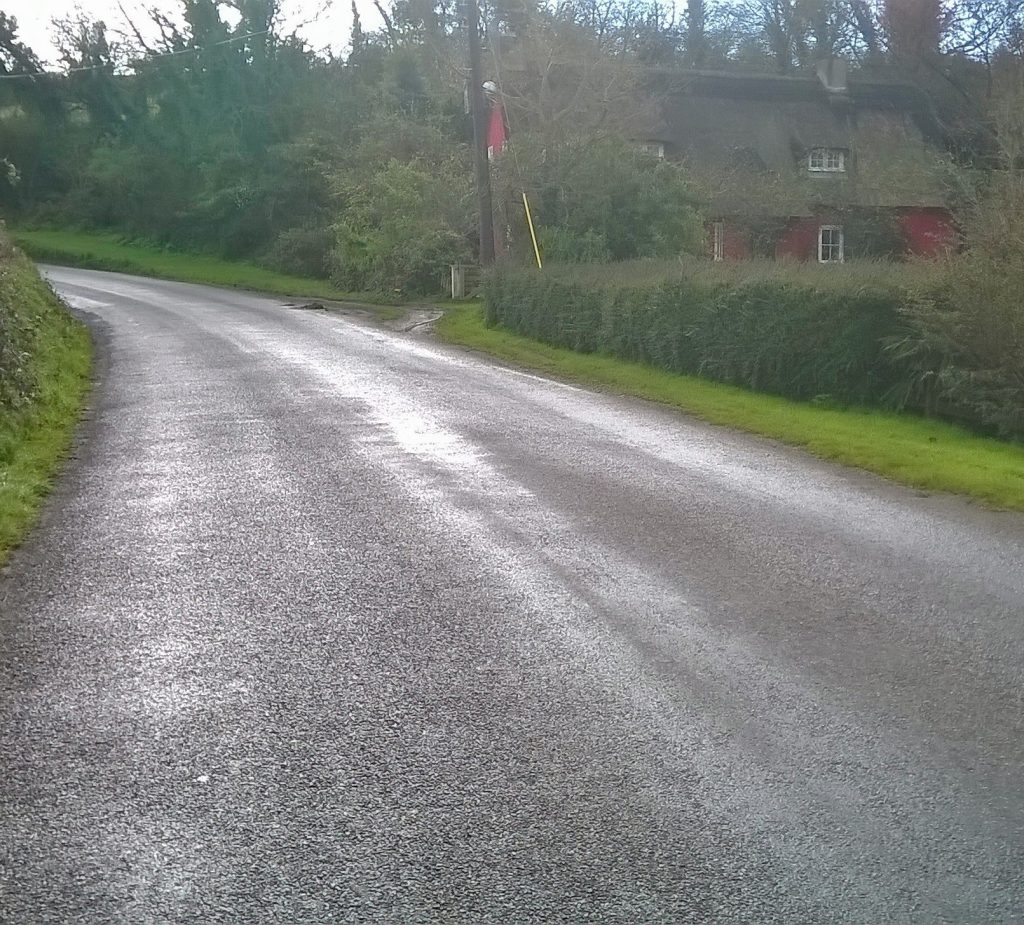 Let’s get to the distraction, the mile of flat is within comprehension.  At mile 7 you’re going to notice a red thatched cottage on your right. Why, because it’s at the base of a series of hills which over the final mile of this section will bring you from 30 to 90 feet.  Once you’ve committed that cottage to memory look right again.  There, you’ve glimpsed it, gate pillars and an inscribed plaque.  How many times have I passed that gate to the undergrowth and said to myself I can’t stop and look.  On my trike however, I had to.  On the pillar on the right: 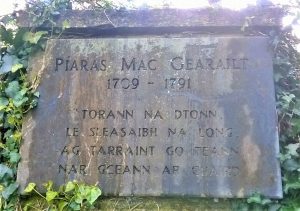 The dash of the wave ‘gainst the ships of the brave,

And gallant hearts that are drawing near.

Thanks to you, athletes, and Ironman Ireland, I uncovered for myself the last resting place of one of the great Munster poets, whose Rosc Catha na Mumhan or “Battle Cry of Munster” (translated by R.D. Joyce) is said to be one of the finest Aisling poems, where hopes of Ireland’s liberation are given in verse.  You could do worse than having The Chieftans Battle Cry of Munster’s fiery melody playing as the soundtrack to your cycle.

As well as the poem a fabulous and detailed history of Mas Gearailt whose birth and death place you are now passing is given here http://kinsalebeg.com/chapters/piarasmac/piarasmac.html.  Any family history that dates back to 1588 is worth a read, especially when it contains the memorable lines: …a family tradition stretching back over the centuries which seemed to incorporate a combination of legitimate trade, smuggling and a sprinkling of piracy.

The pillar on the left I then discovered was also inscribed.  Its sombre sign gave me the shivers. 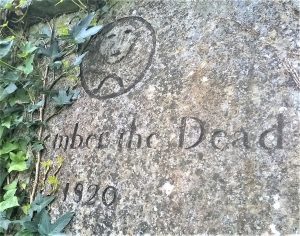 In the last few miles you have already passed 3 cemeteries, a castle, two ancient enclosures, a host of vernacular houses, a lost village and 2 ruined churches.  One of these churches was recorded back 500 years.  Some 500 yards later you’re taking your first right hand turn at the homemade Ironman Route sign.  Time to stand on the pedals again, you’ve reached Ballyferode.