What do Maurice Garin, George Stone and John Fitzgerald all have in common?

On 1st July 2020, 117th anniversary of the first stage of the inaugural 1903 Tour de France John Fitzgerald did same distance that Garin did (in 1903) on a restored 80 year old Stone Special bicycle. The original stage was 467km from Paris to Lyon, John’s stage was in County Loais (Ireland).

John contacted the OldVelos earlier this year looking for a suitable vintage bike to attempt a ‘Fixed Gear’ non-stop ‘Mizen to Malin’. He had completed a 24 hour TT last year covering a distance of 453 Kms. During our conversation, for some reason, I mentioned Tim Moore’s book Gironimo. John subsequently bought the book and the seed of idea for his epic ride was planted. His plan was to start at 3.16pm on the 1st July 2002.

The bike that he built was not an exact replica of a bike from the era but was, in our opinion, a very tasteful and practical restoration. Have a look at the photos below and decide for yourself. You have to admire his bravery (or foolhardiness!) in taking on such an epic challenge on a fixed gear bike

Here is what John has to say about the restoration: ‘I was happy with my modified Lucas front lamp which I ran off the front dynamo. It gave sufficient light to allow other road users to see me and there is a certain satisfaction to be derived from generating your own electricity! The frame was resprayed. The original paint looked like what I have heard referred to as a ‘Hand Enamel’ job which is a euphemism for a badly executed application of paint using a brush. Since I planned on using hub brakes I filled the brake caliper holes as I thought it would fit in with the overall look I was going for.

Handlebar tape is cotton with cord shellac finish. The same effect was used on the front fork. fork. A Sturmey Archer front ‘Dynohub’ with writing sanded off was built into the front wheel so as to give a vintage look. Cork handlebar plugs and champagne cork hanging off the back of the saddle as a reminder of what riders used to do in the six-day racers of old.’

When describing his adventure he says:  ‘At 10.37pm, after 467km, I finished my anniversary of the inaugural stage of the Tour de France. I would have been placed 33rd out of the 60 starters but remember I did it on modern roads not the dirt tracks these early pioneers did it on. The winner of this stage and overall winner was Maurice Garin who did the stage in 17 hours 45 minutes 13 seconds, averaging 27km/h.’

When OldVelos originally acquired the George Stone it was with the intention of restoring it but I think you will agree that it is much better to see this piece of Belfast’s cycling heritage rejuvenated and being put to such good use. We are looking forward to hearing what John is planning next…. 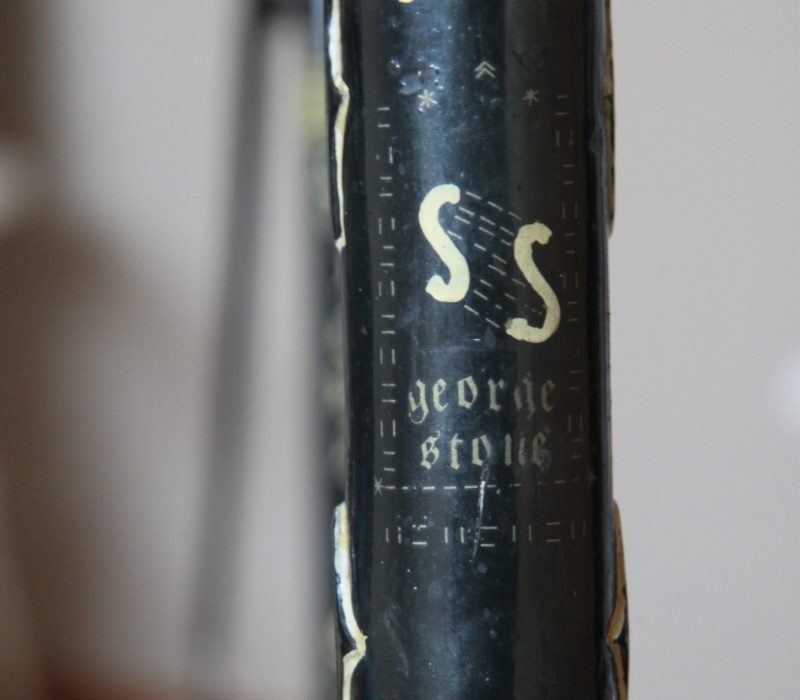 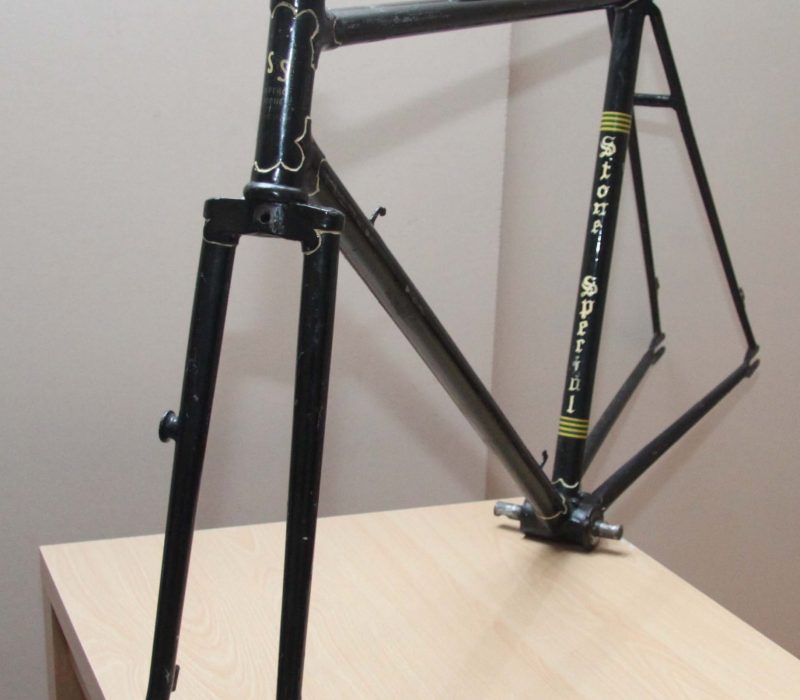 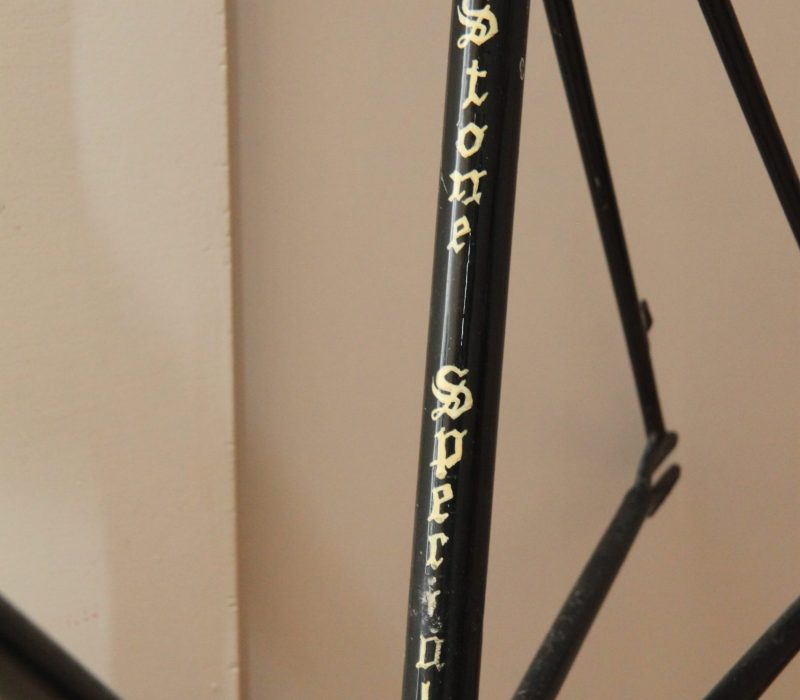 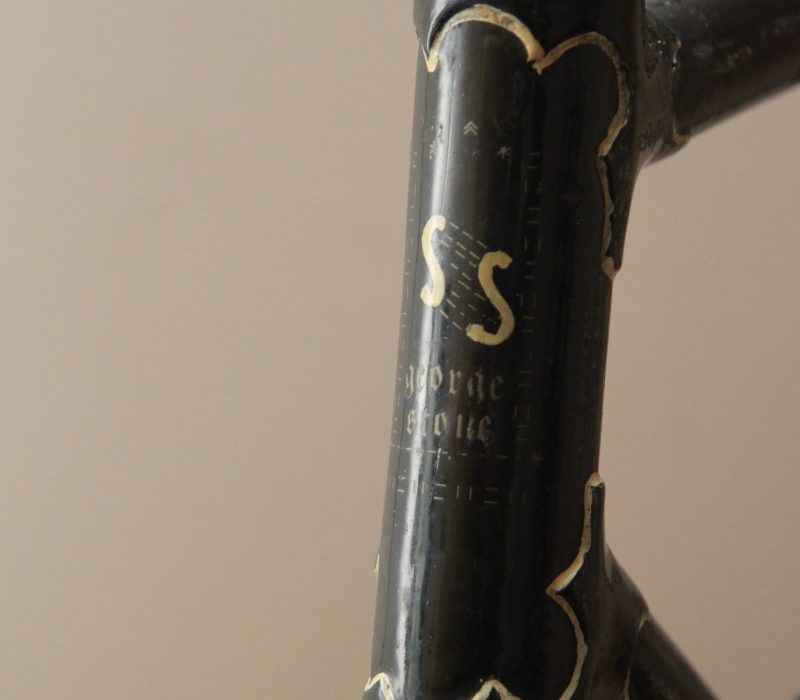 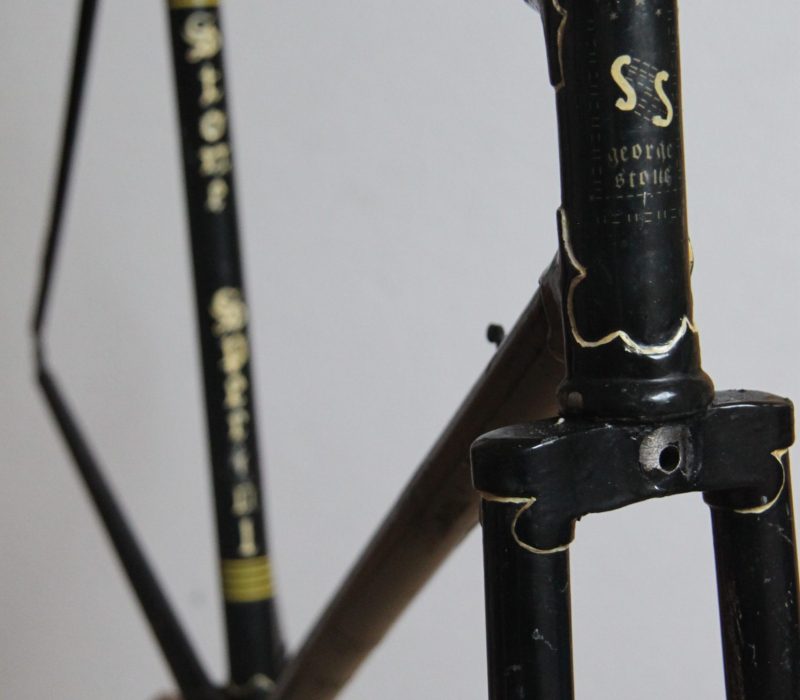 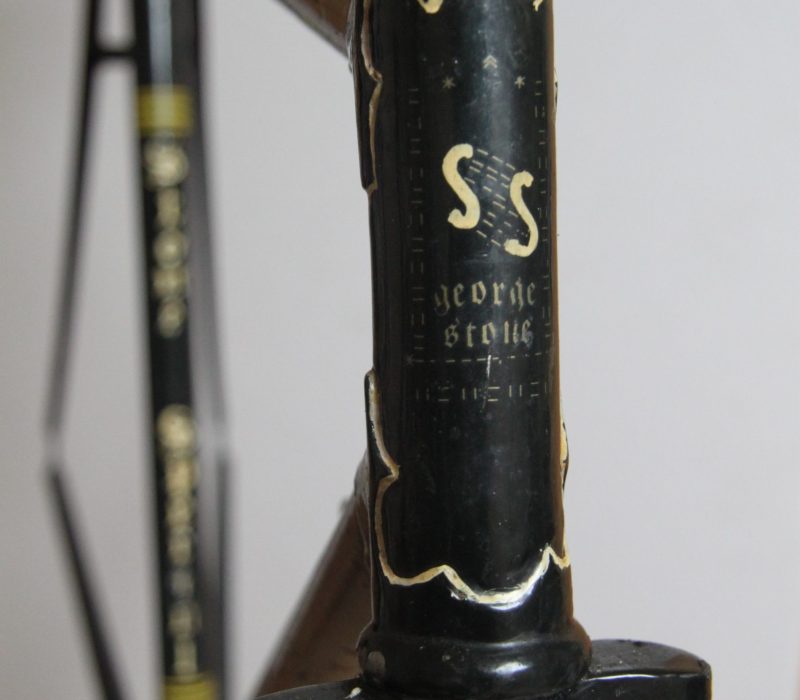 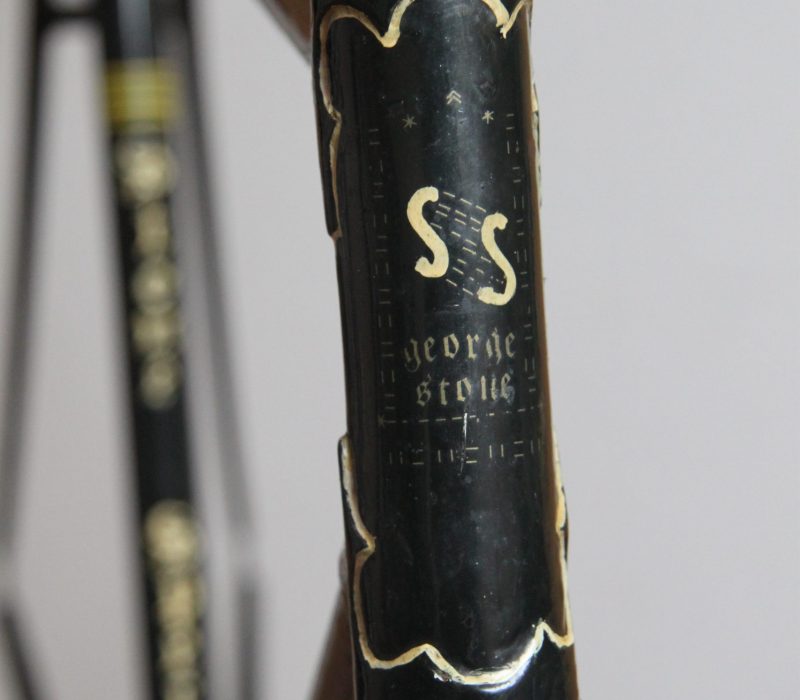 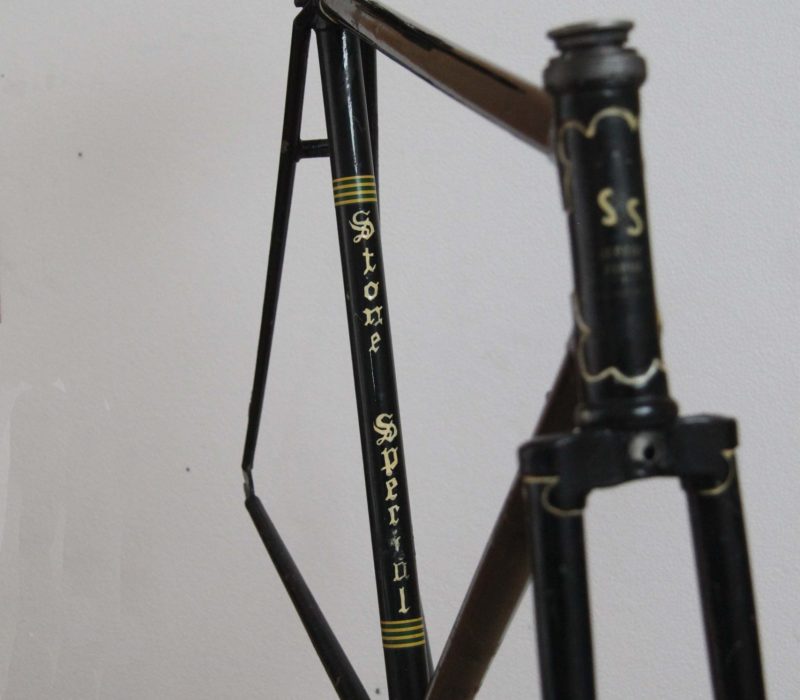 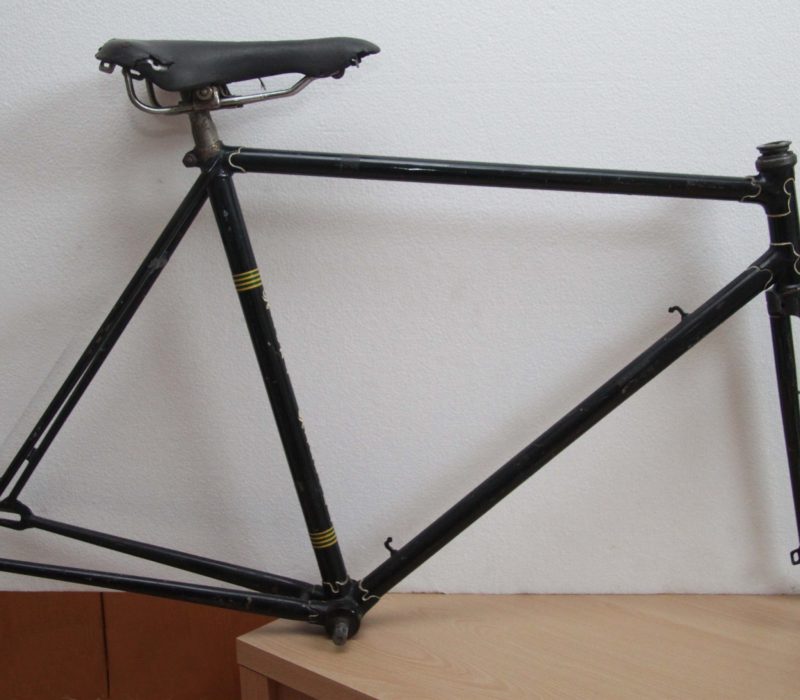 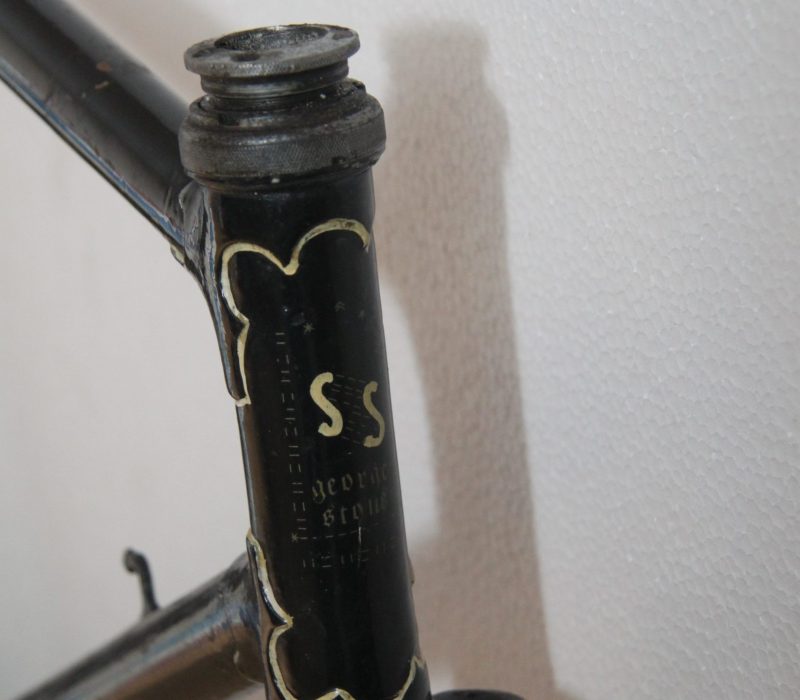 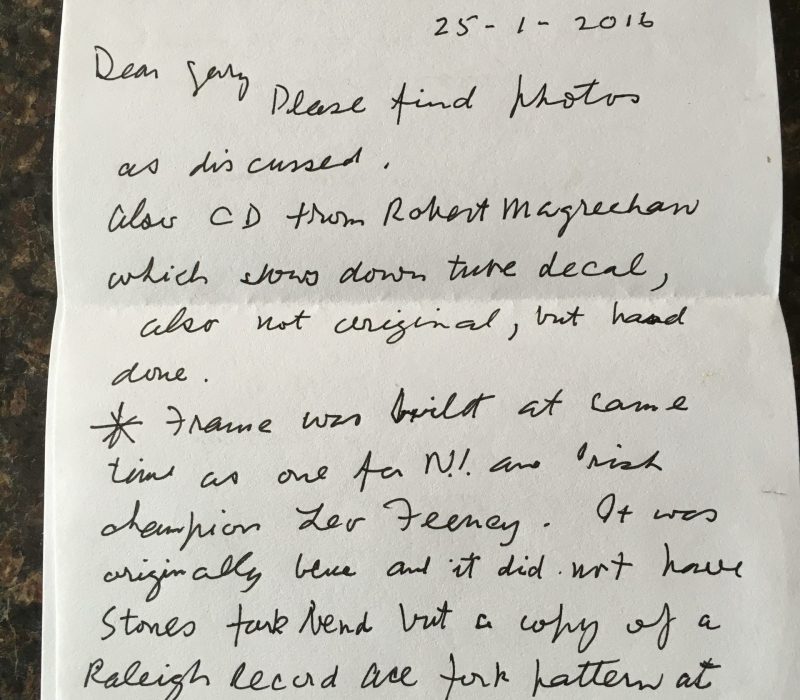 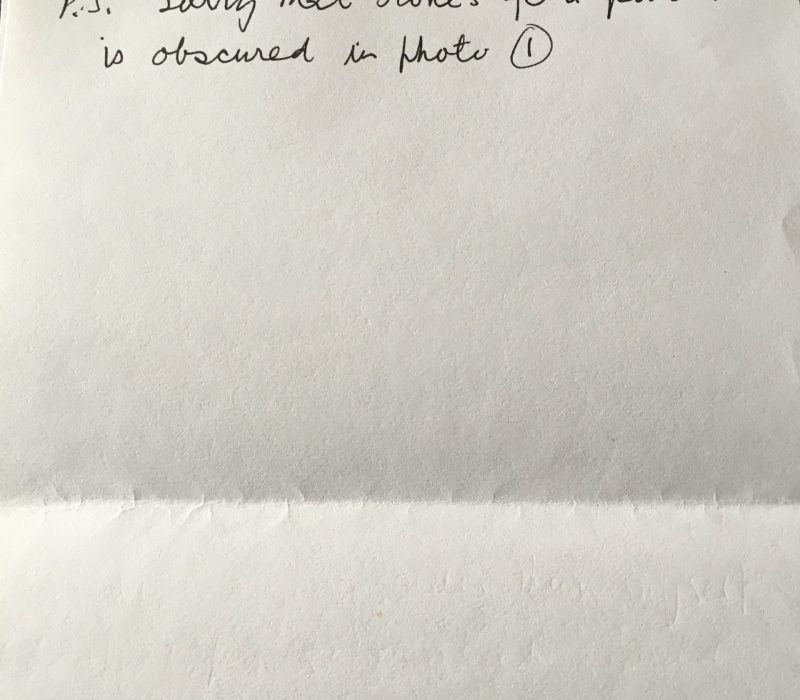 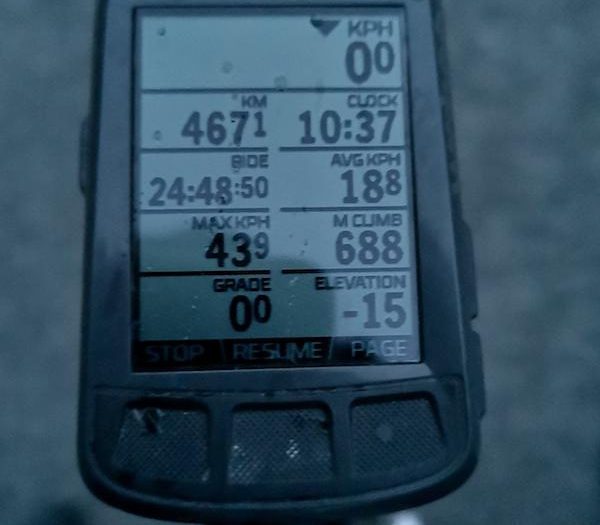 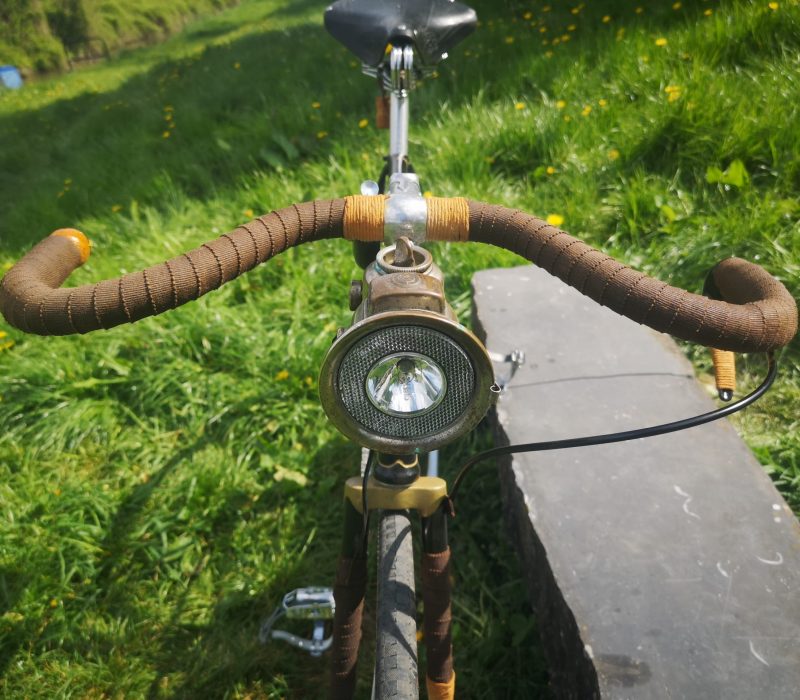 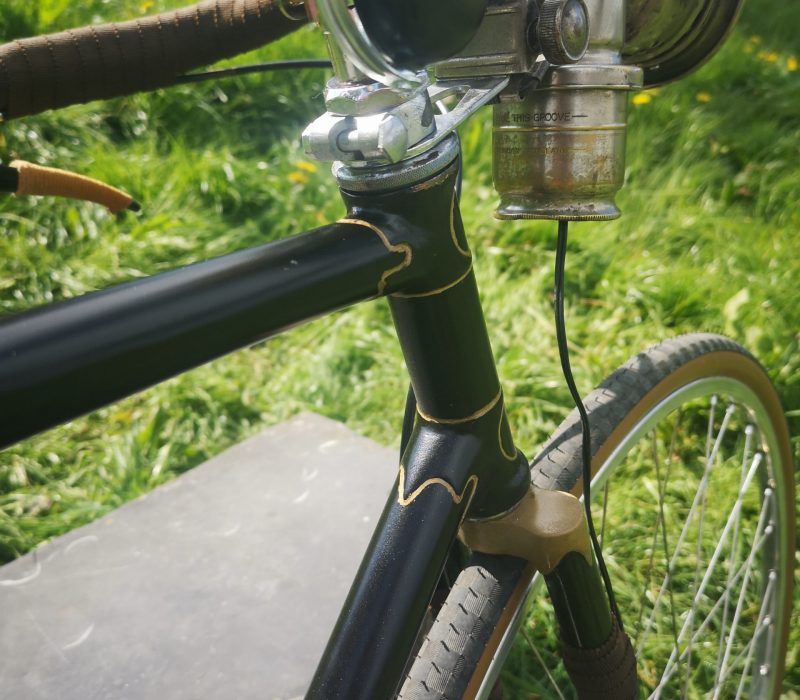 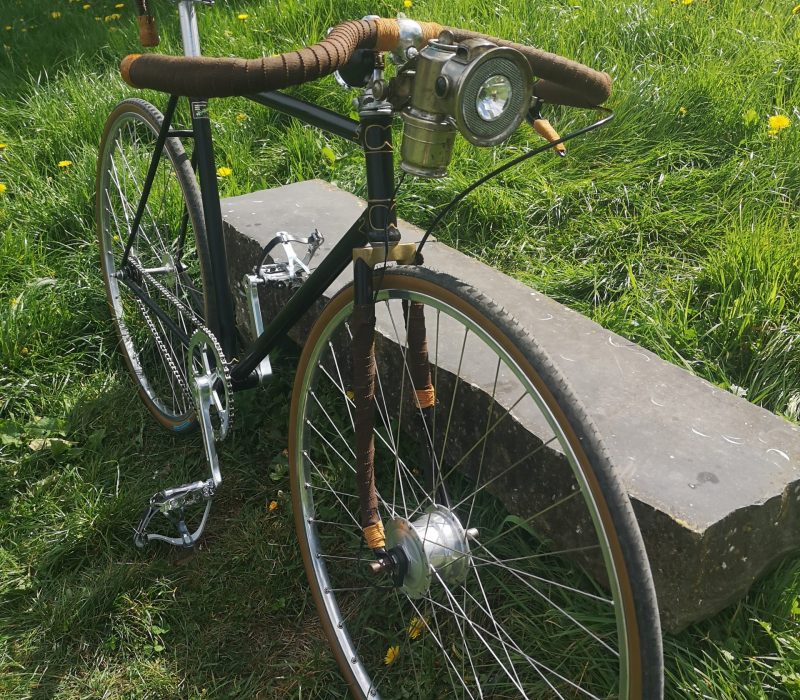 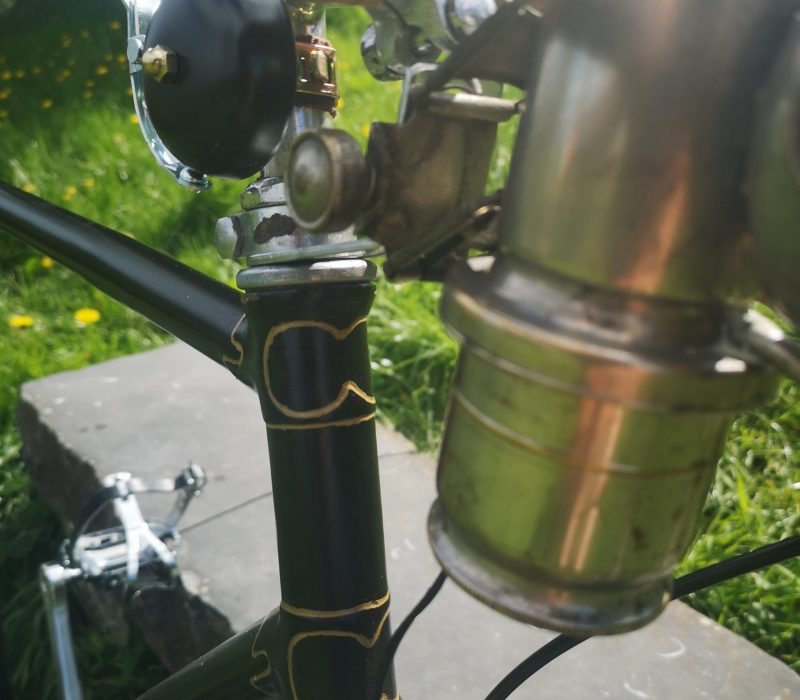 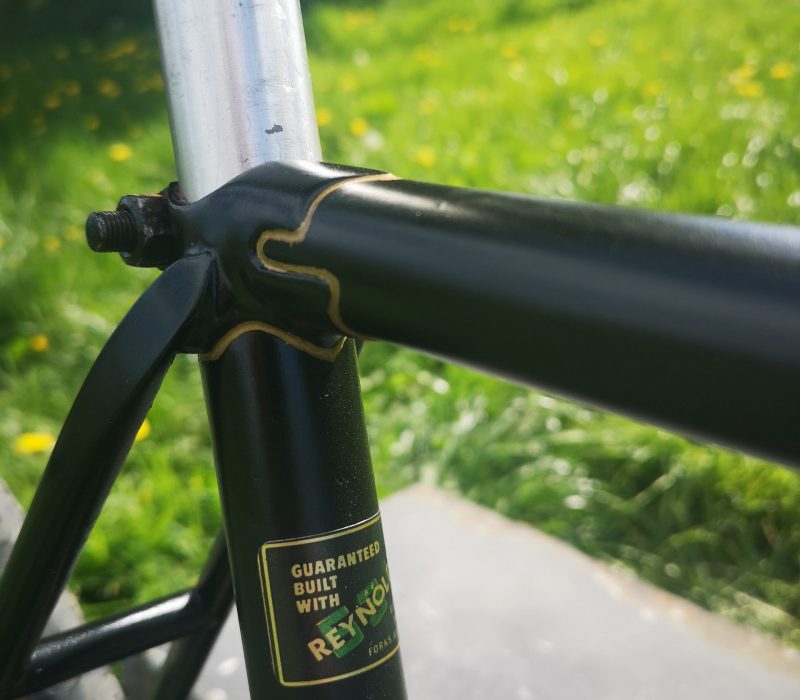 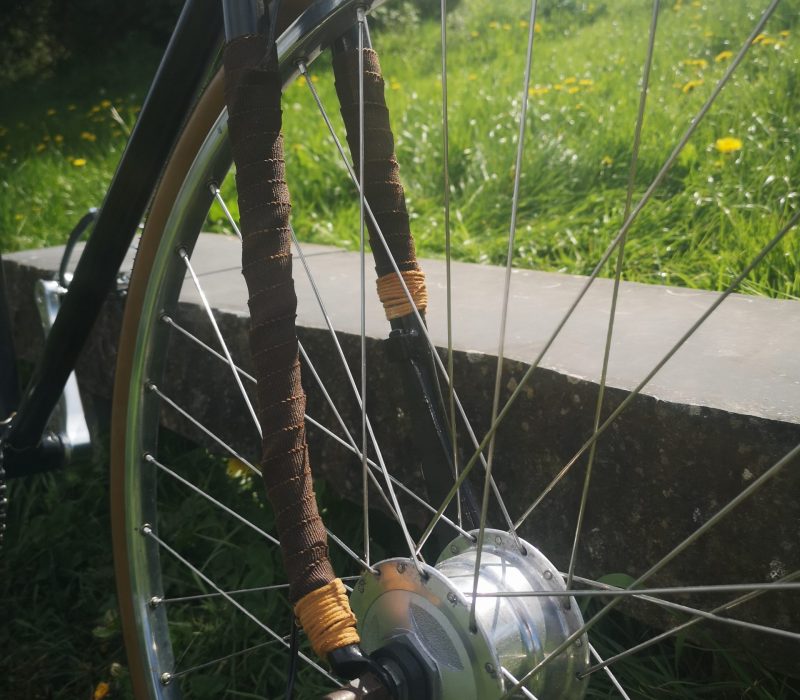 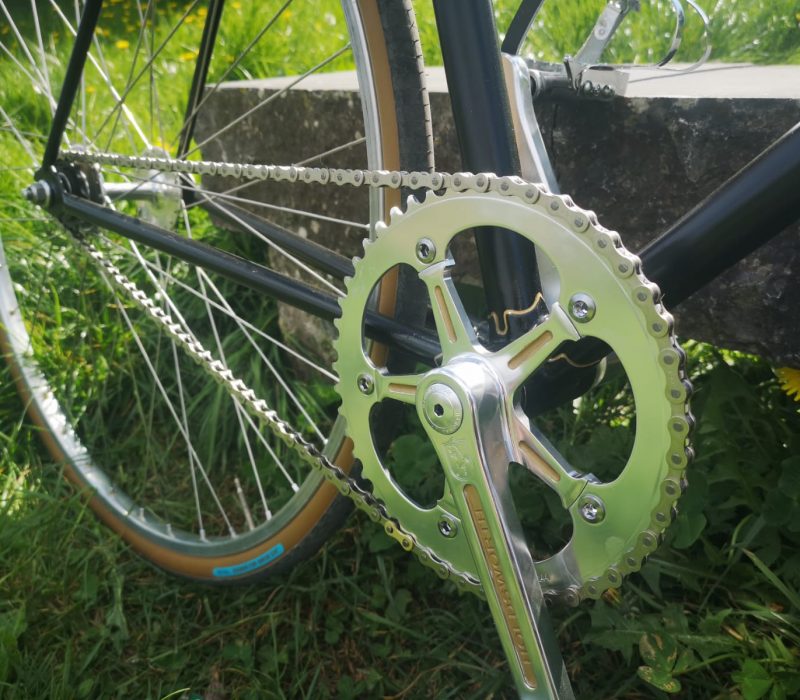 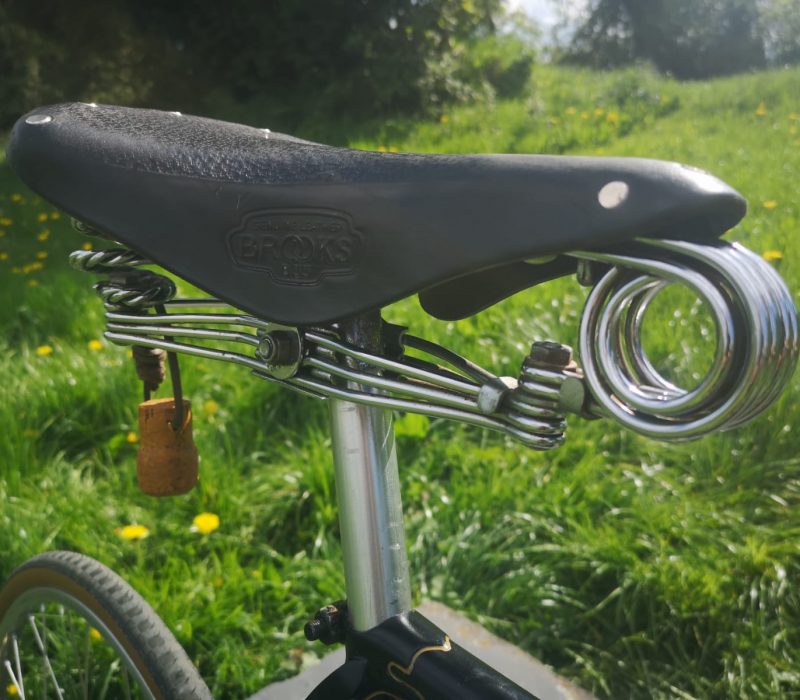 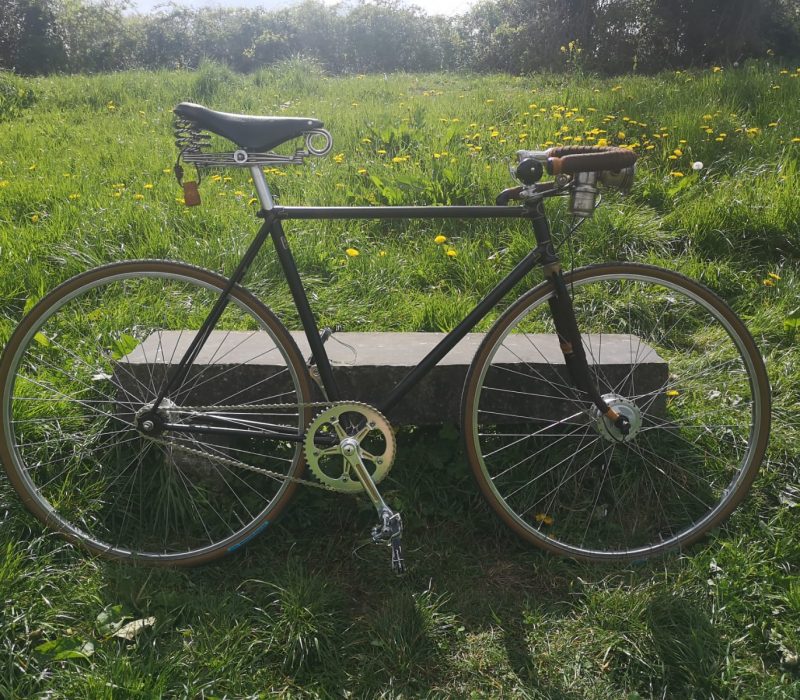 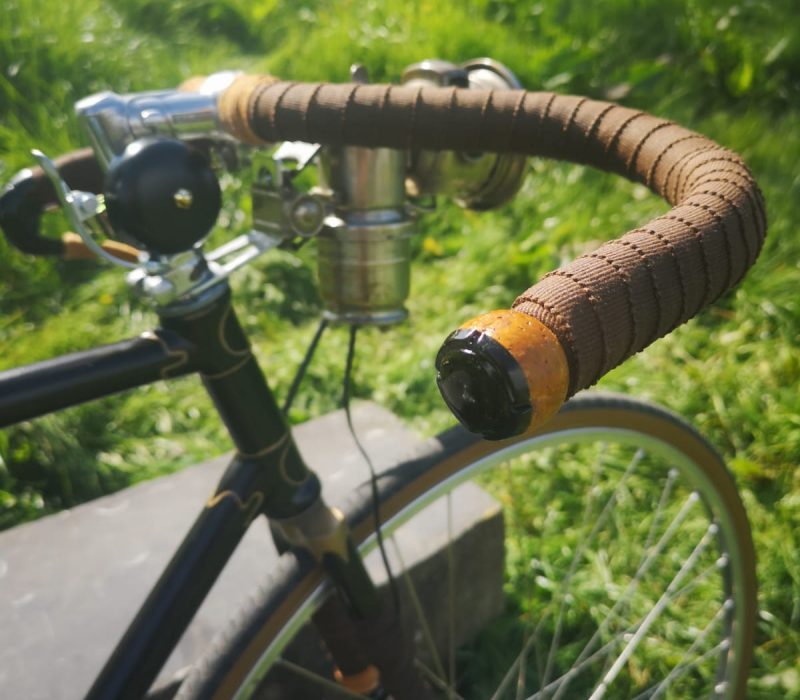 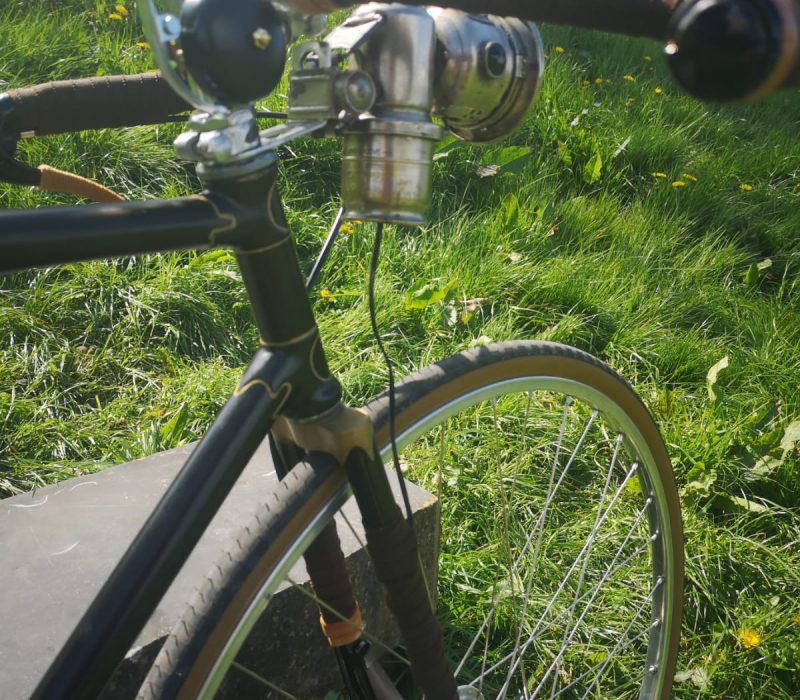 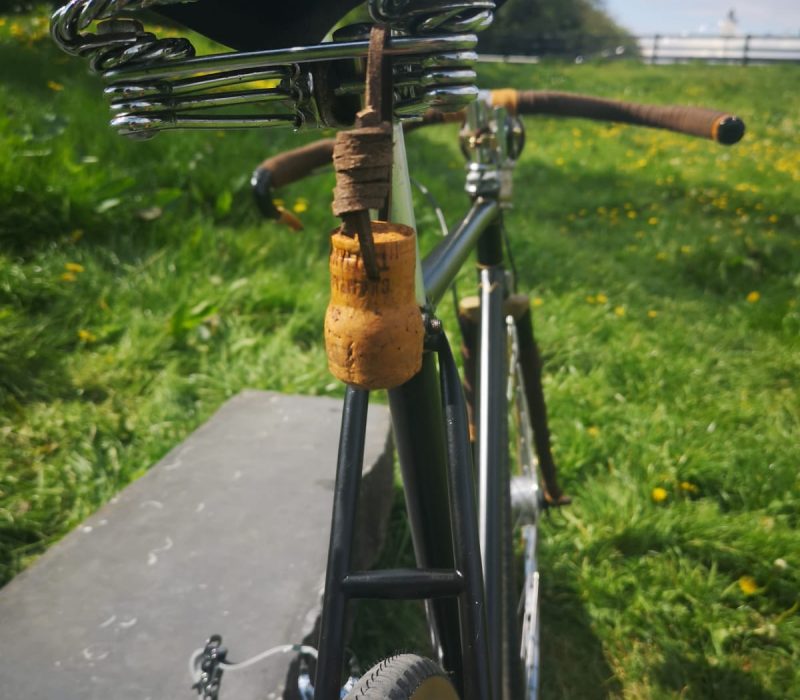 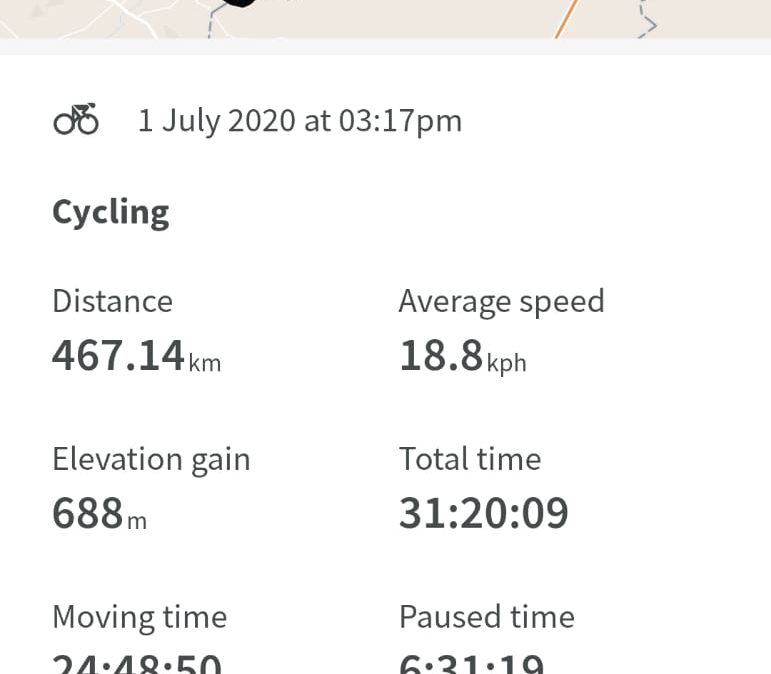