Who is the Laserman and why did Cinelli ask him to build a prototype dual suspension track bike?

At L’Eroica you get to meet some interesting people connected to the bike industry. We had the good fortune to meet with Andrea Pesenti (aka Laserman). Andrea was the number one frame builder for Cinelli and built the prototypes for the most famous of all their frames the innovative ‘Laser’. 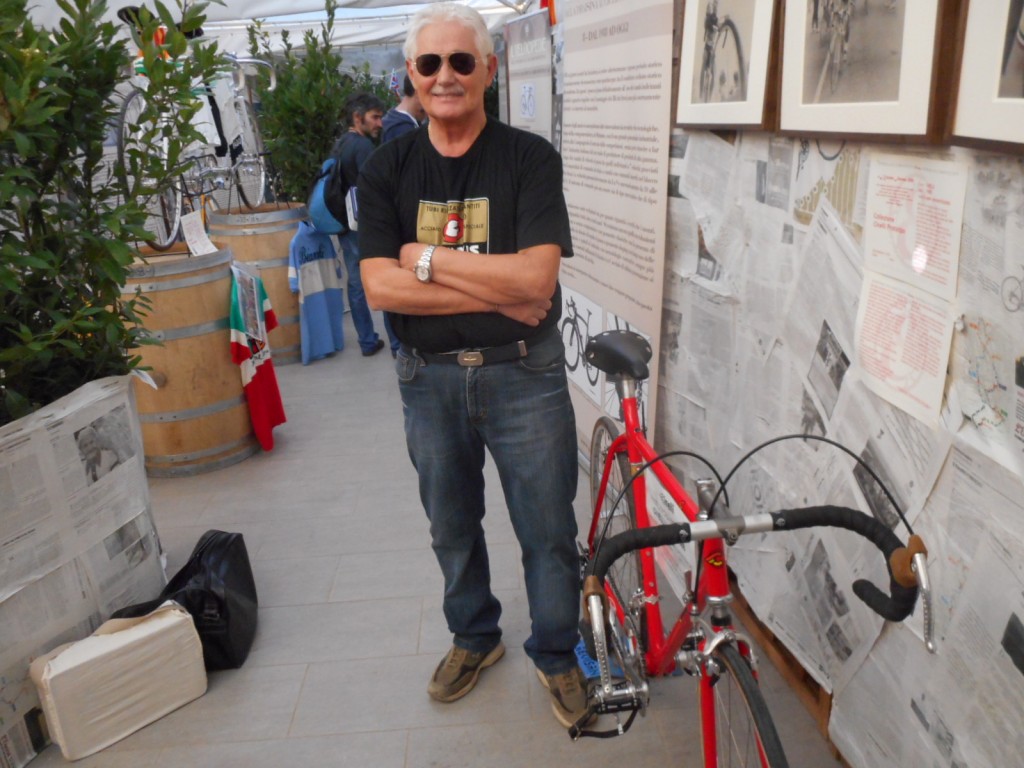 The ‘Laserman’ had with him the beautiful bike you see in the photographs on this page. Our first thoughts were that is must be some sort of a prototype for use in the Classics.  When I said this to him he smiled and wagged his finger. The next half hour we spent talking about the bike with the help of ‘Google Translate’ and much pointing and gesturing. Below is the story of how it came to be, for those of you that can understand Italian we have included a photograph of an  information sheet that was beside the bike.

‘After Francesco Moser’s (who retired in 1994) successful attempt at the hour record in 1984 interest in ‘The Hour’ was rekindled..

The manufacturer Cinelli, in particular, expressed interest in winning the coveted title. During 1985 Cinelli sponsored an amateur rider with the intention of attempting the record at La Paz (4,100 meters above sea level) in Bolivia.  Cinelli were renowned for having a very skilled technical team including the brilliant expert on matters physical and the human physiology, Professor Di Prampero.  This renowned doctor and teacher was based in University Udine in Italy and was also associated a well-known Swiss university.

The focus of the discussion was about the bicycle and how its performance could be optimised.

The main issue they saw was how reduce the tubular diameter. The reason behind for this, they believed, was that if they could reduce the diameter below the then current limit of 15mm, it would lead to a massive reduction in  the attrition/friction on the track during the event.

In 1986 another professor called ‘Dal Monte’, who was an expert on biomechanics, along with the Cinelli tech team, proposed using a solid tire with a profile shaped like an Ω  with a diameter of 9-10m.

The solution confirmed itself efficient, lowering considerably the attrition/friction with the track surface. Unfortunately this lead to a different problem. The solid tire had very little ‘give’ so it put a serious strain on the rider. There were doubts that any rider could physically maintain optimum performance in these conditions. The solution was to build suspension into the bike.

‘Laserman’ the premier frame builder with the Cinelli team was given the task of designing and building this bike. The prototype he built is the one we photographed at L’Eroica which you see here. The design was refined updated and was tested on the road with the intention of using it on the track.

The prototype we saw was the result of the anthropometric data collected for the person who  was the subject of the testing so this frame would be unique to him.

Unfortunately the lack interest in ‘The Hour’ meant that this project never reached a conclusion and what we saw is the last remaining tribute to the  project’s technicians, testers and possibly champions who were involved in this little known phase of the technical development of the racing bicycle.’ 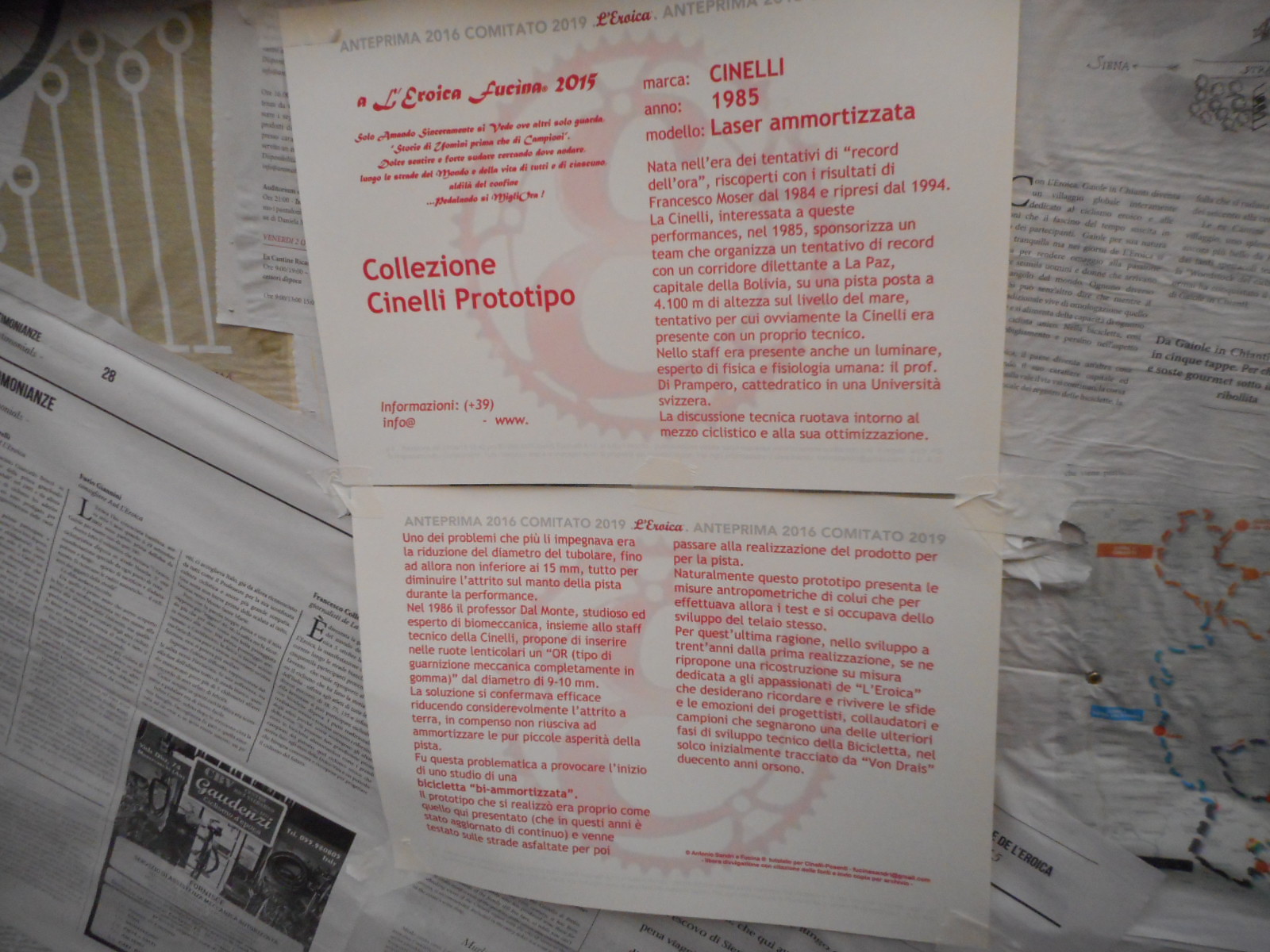 The gallery below shows the bike that ‘Laserman ‘ had with him in Gaiole and we have also included some other examples of his superb work. 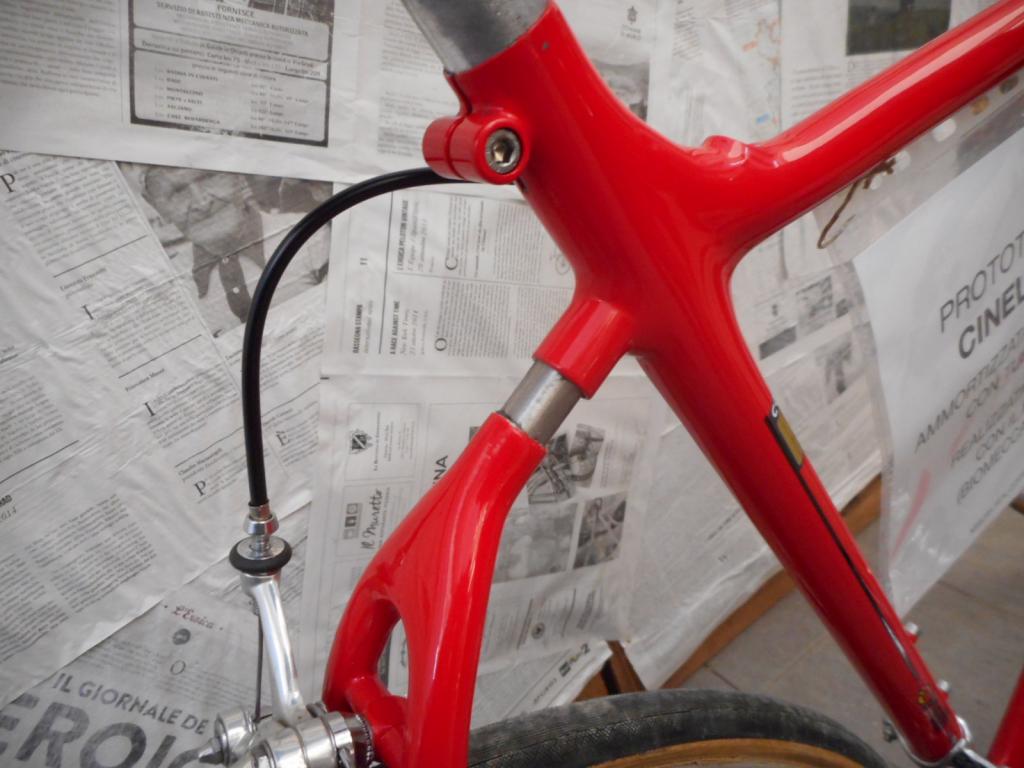 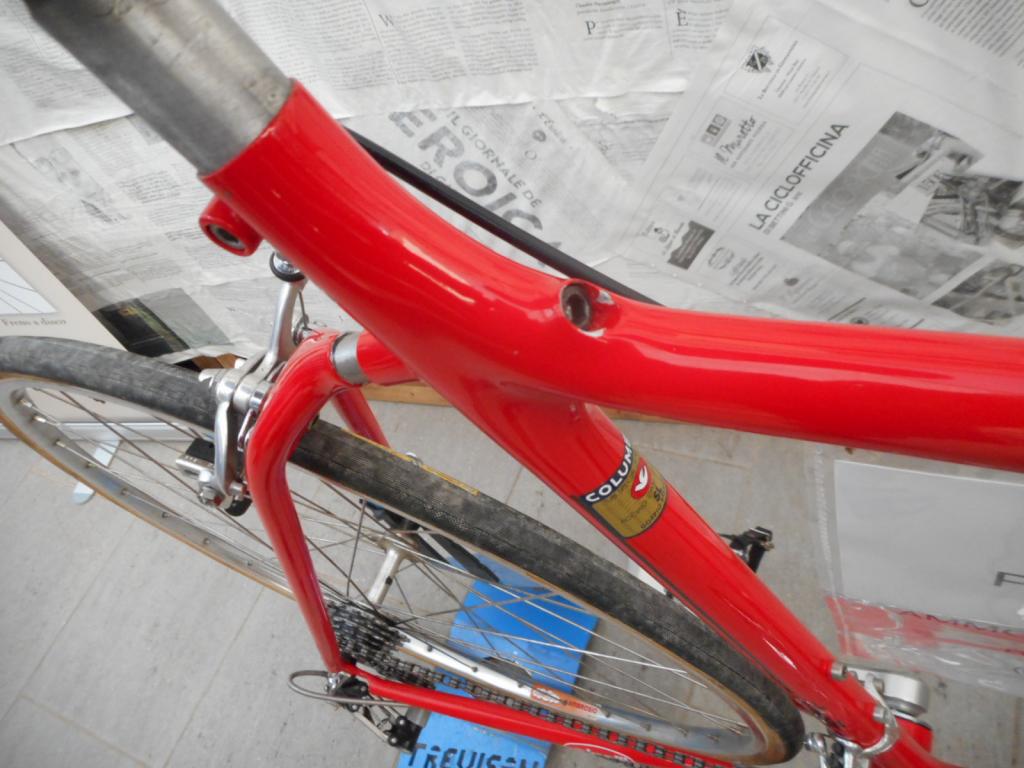 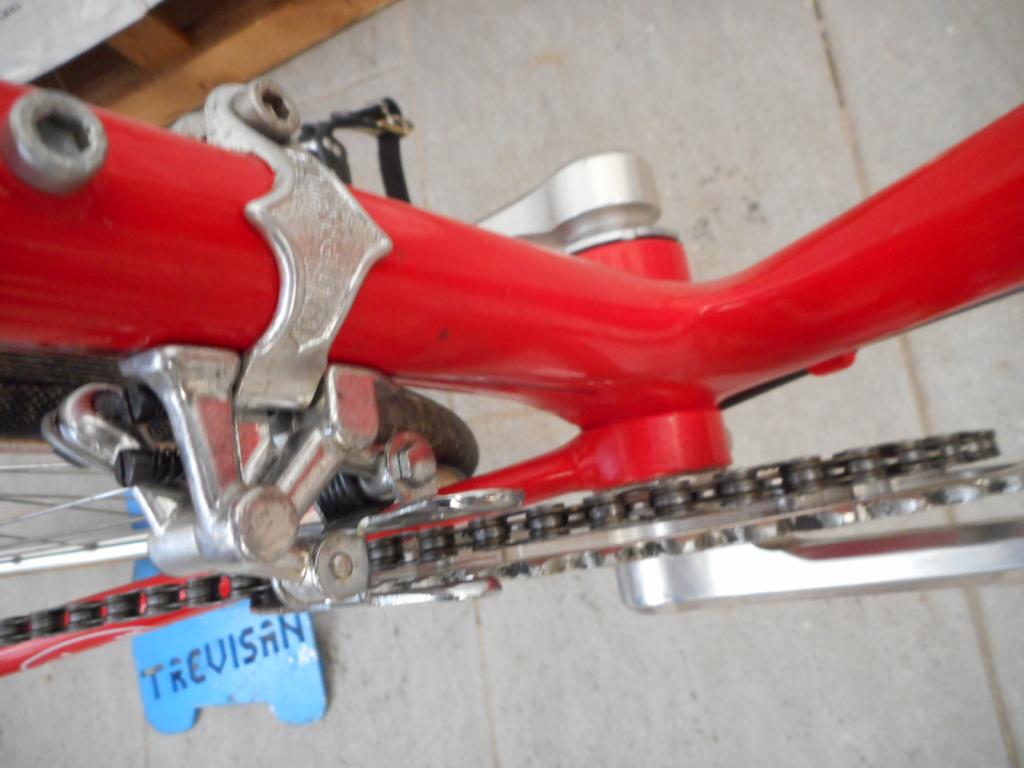 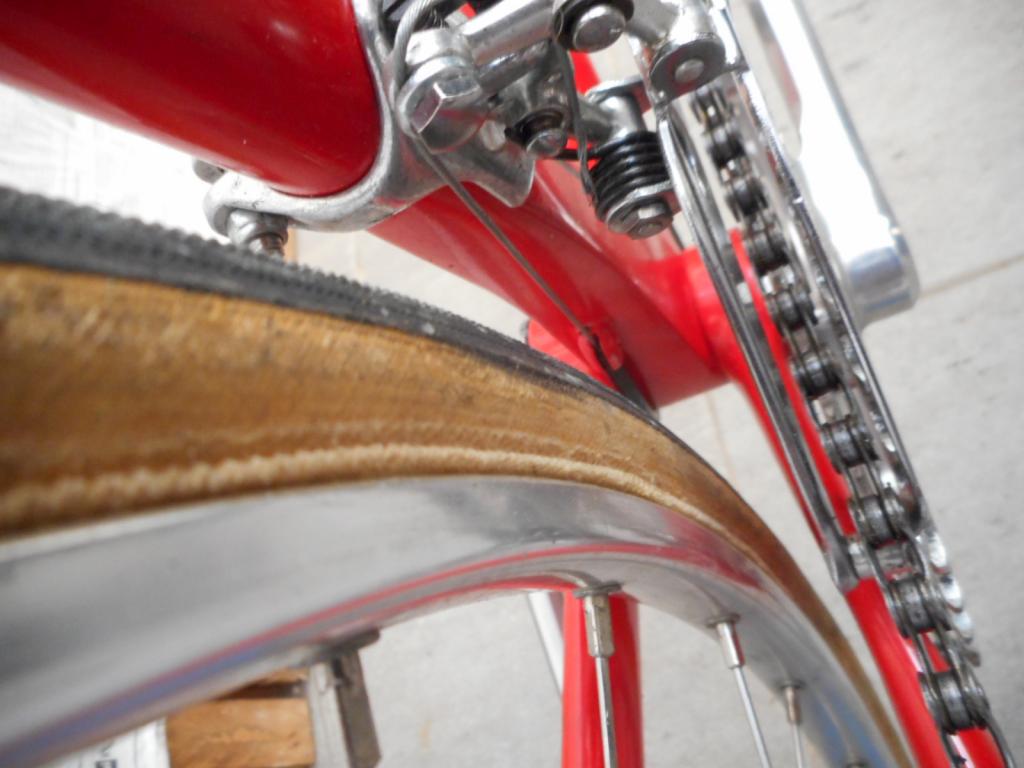 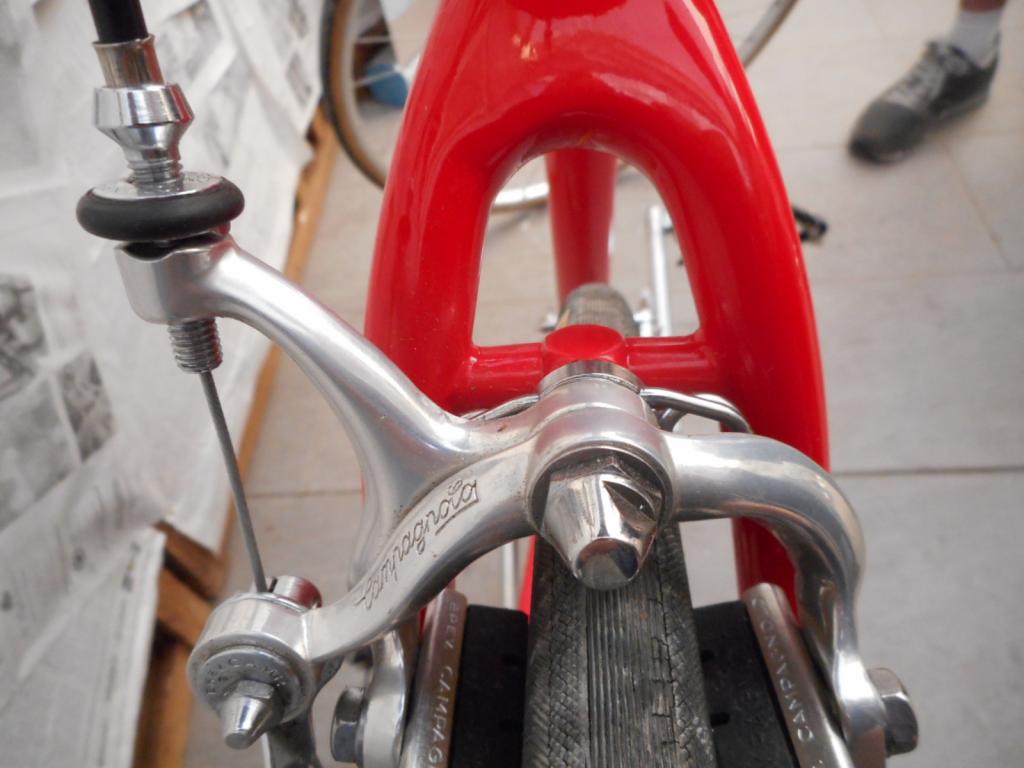 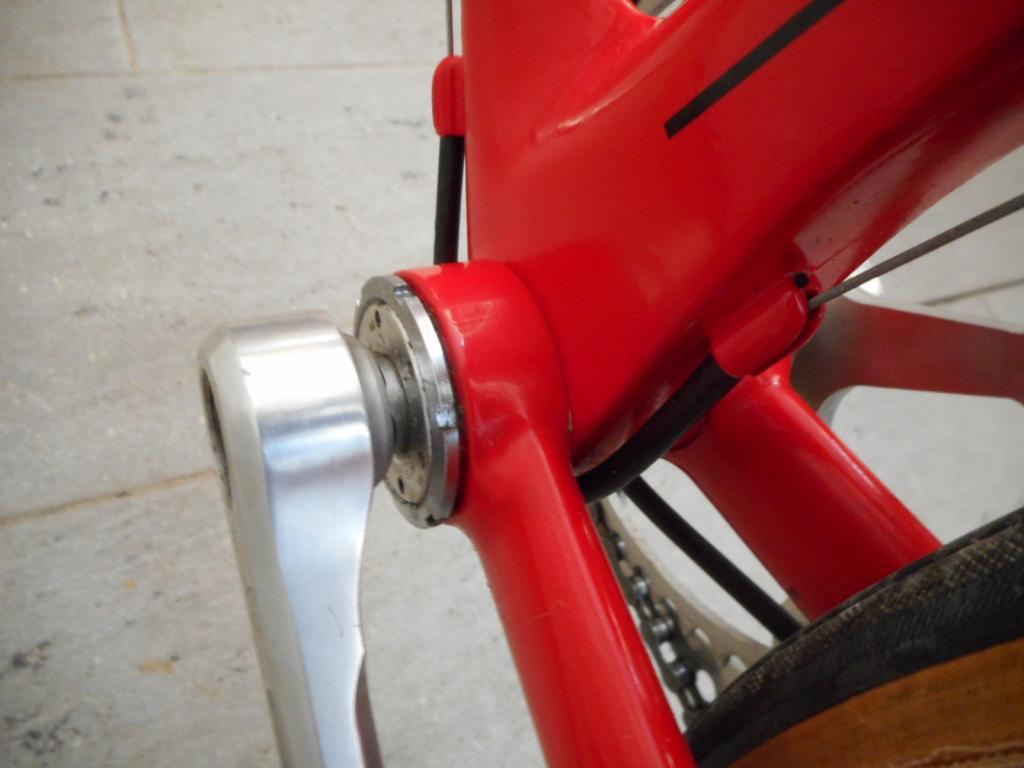 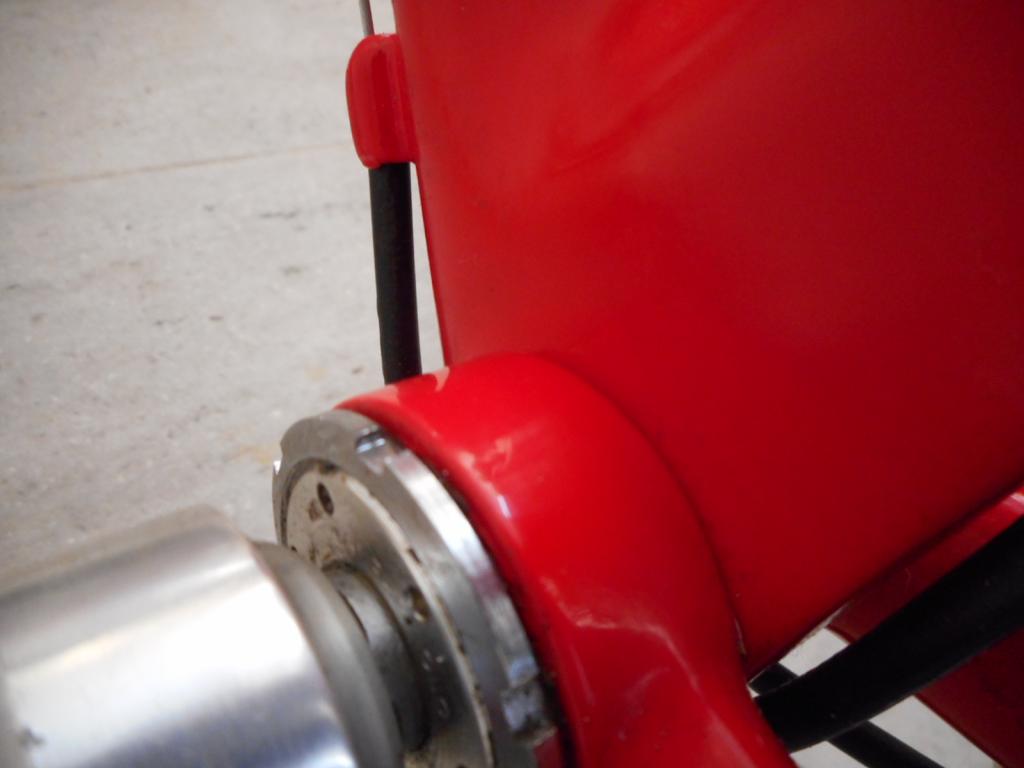 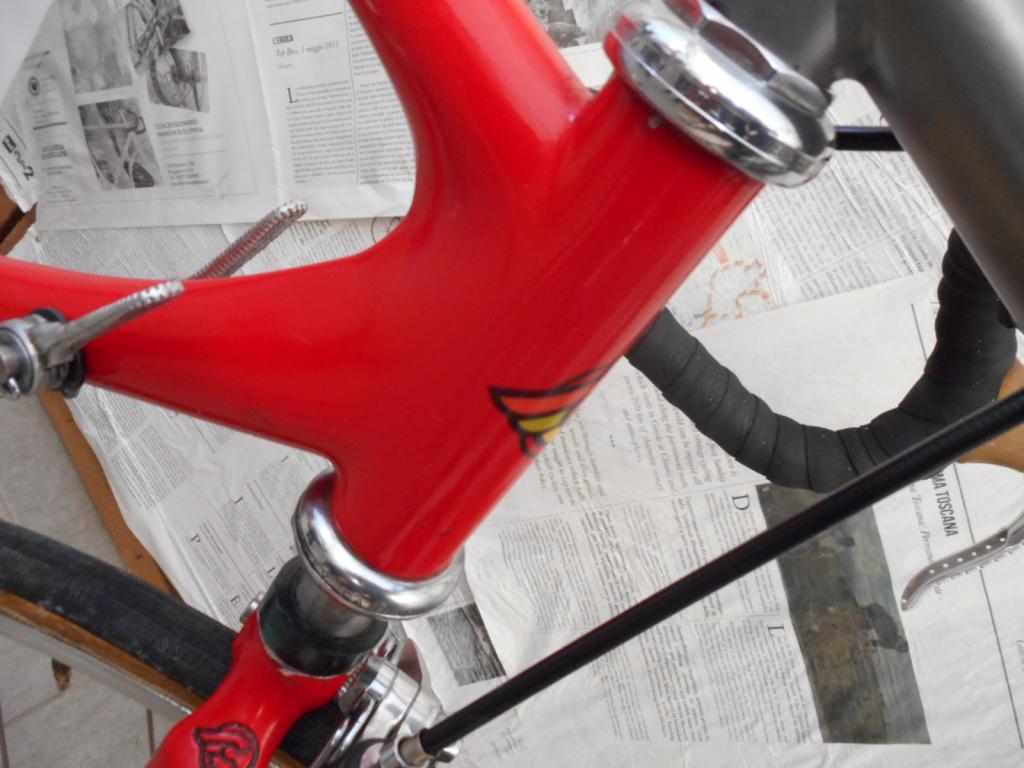 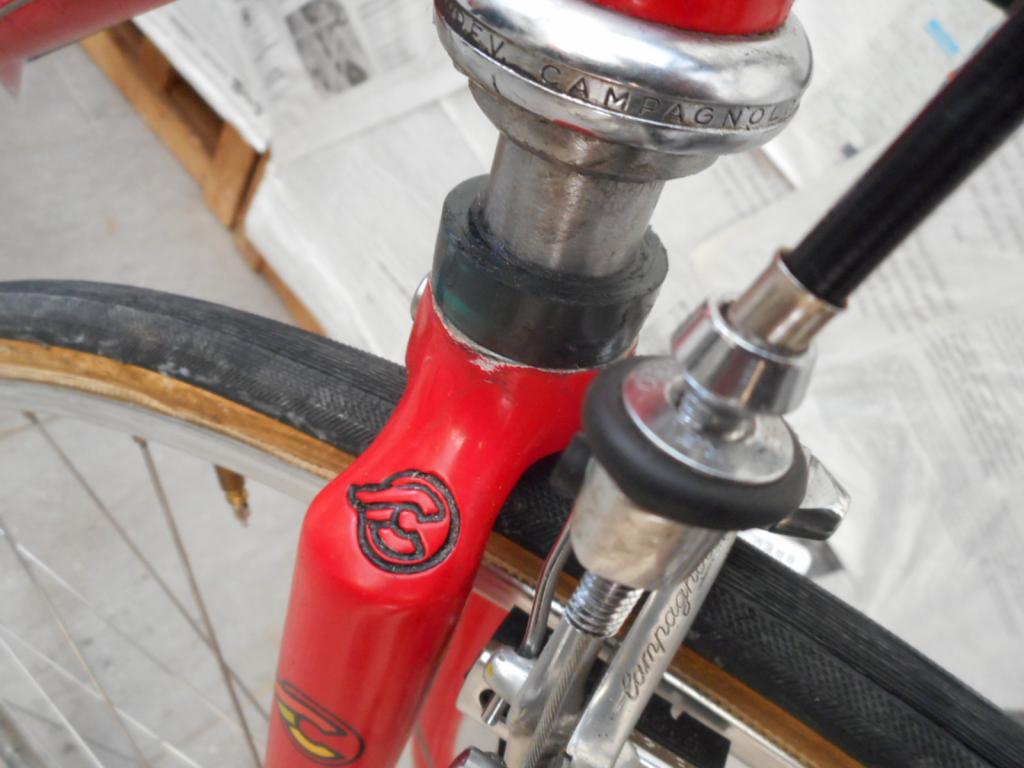 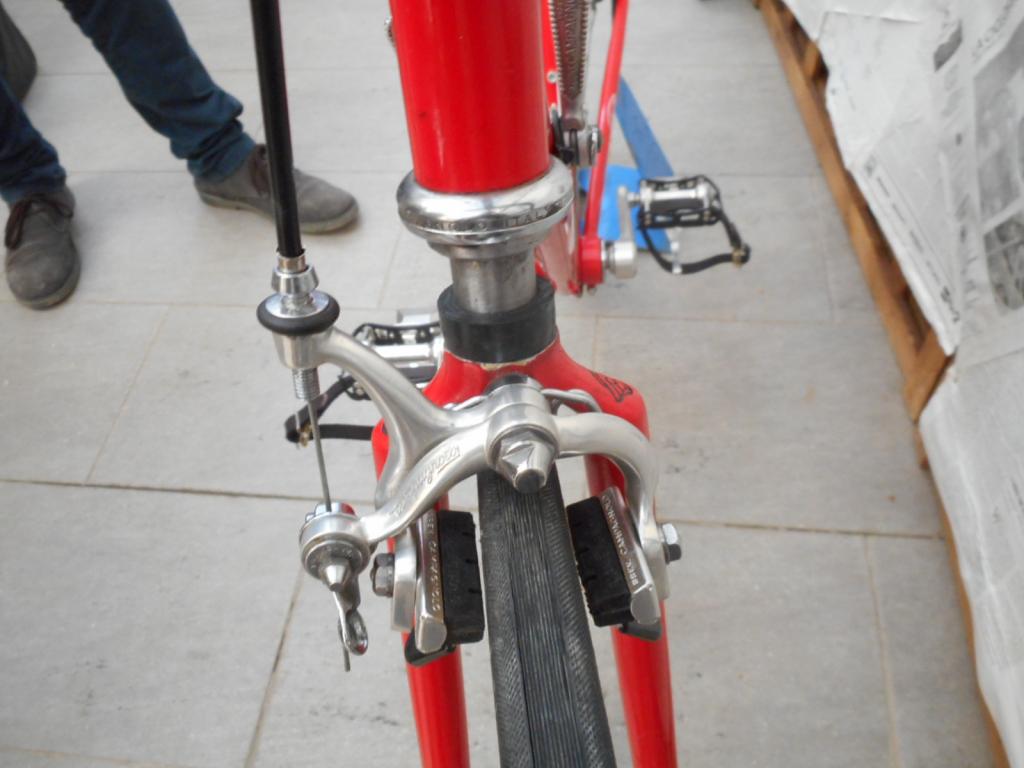 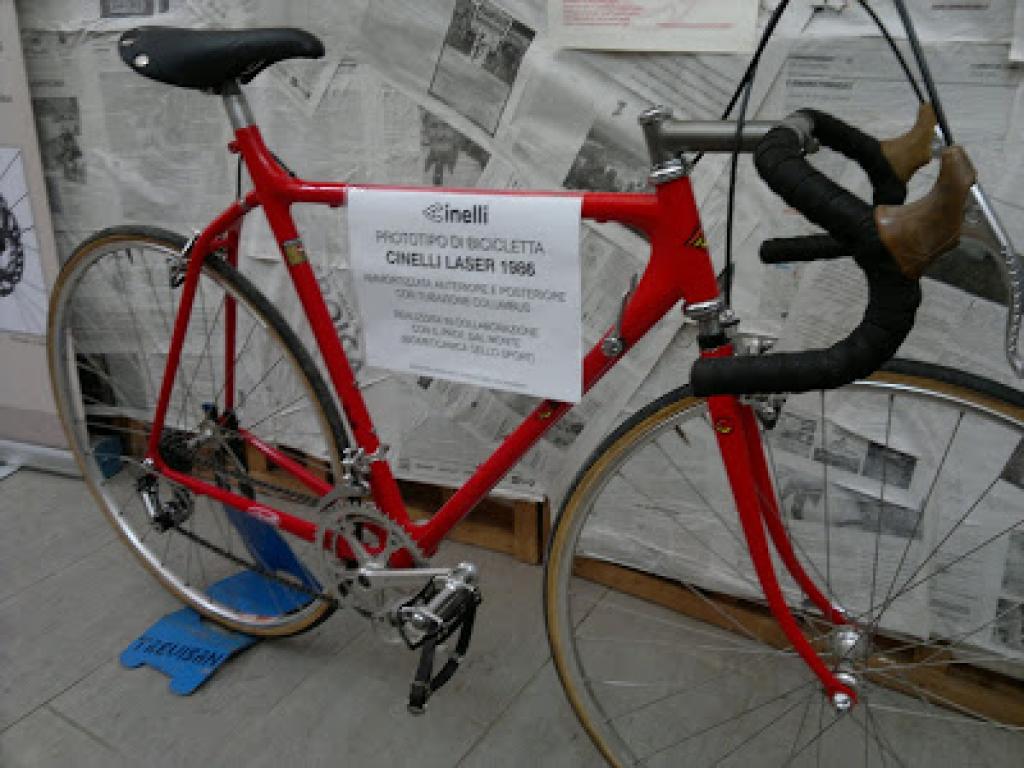 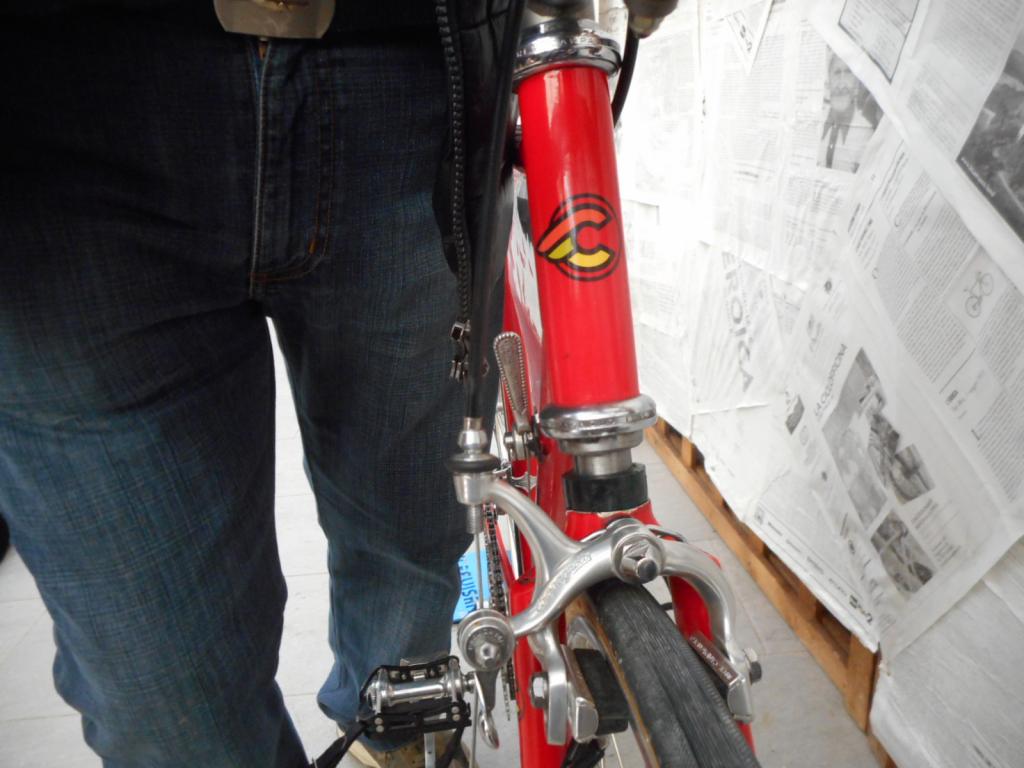 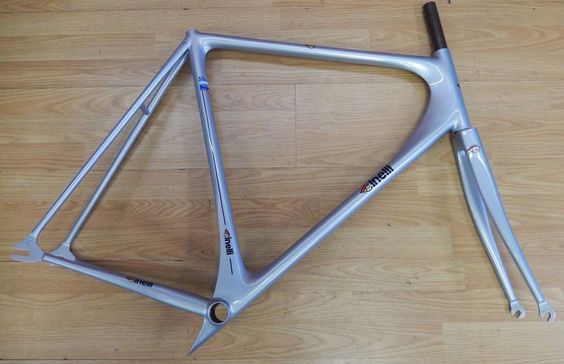 This Cinelli Laser designed by Antonio Colombo and built by Andrea Pesenti was recently sold on eBay for close to $10,000. The frame has “A. Pesenti” on the left side chainstay signifying that the ‘Laserman’ built the frame  . 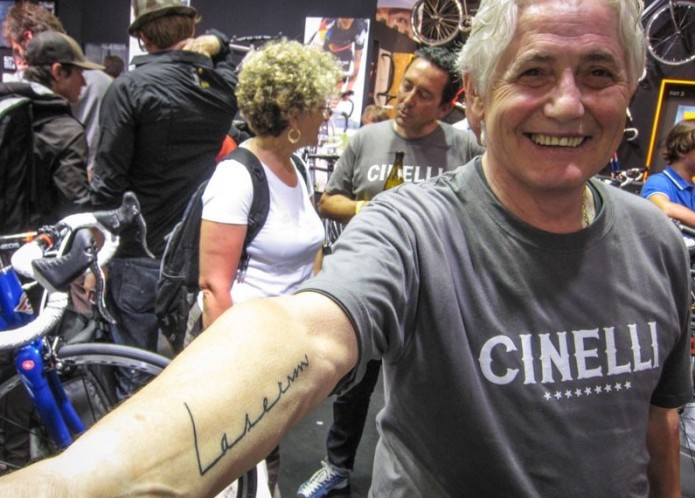 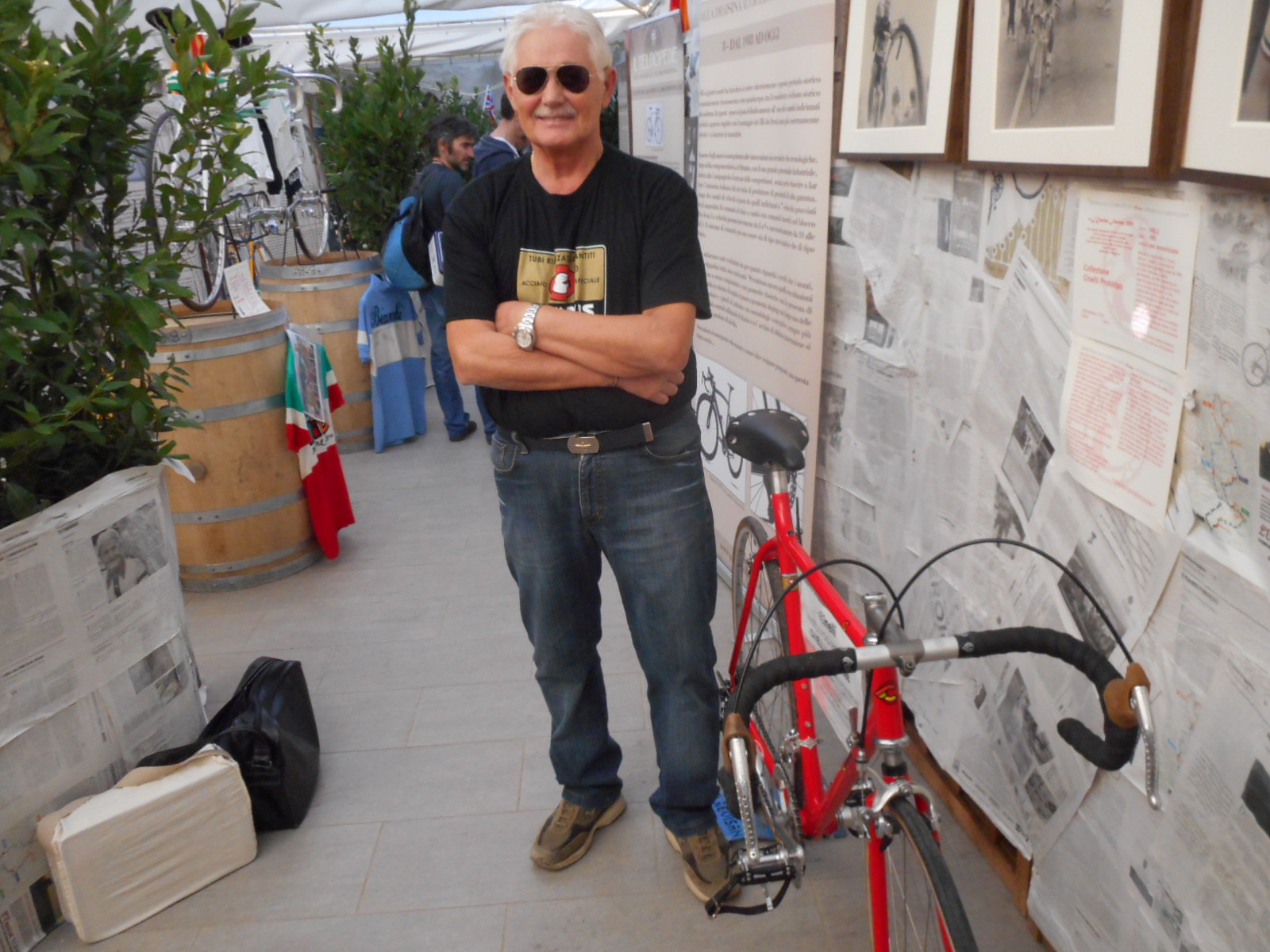 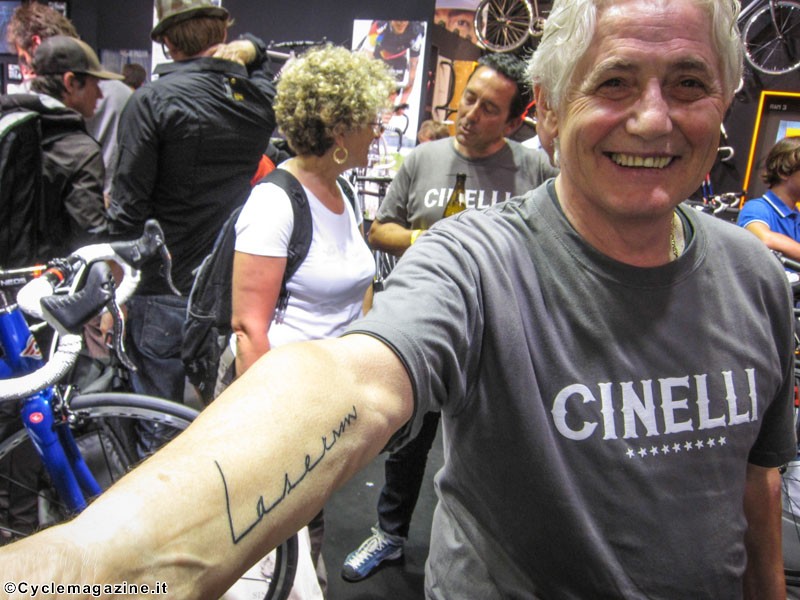