Arms lowered on the drops, our backs hunched down and eyes focussed from beneath peaked caps we aimed the tandem at the fast approaching chicane, sought the racing line, and pedalled furiously. From my short time on this 1980’s time-trial tandem I knew it handled well and although the brakes were more inclined for speeding than stopping I was looking forward to the expectant whoosh and inward whoop of executing the perfect corner. With the front wheel perfectly positioned on the solid white line and shifting our weight for the fast left the tandem did something very funny – it tried to overtake itself. The back wheel strained, buckled, flopped, flipped, did figures of eight and God knows what. The line we took, or at least the one the tandem took, was no longer a racing line but the equivalent of a luas line, with the tram taking a 90 degree bend, up O’Connell street.Luckily there wasn’t a tram coming the other way.

We made it. We stopped though. We shuddered. We said “won’t do that again so”. And we remembered why our riding buddies on their equally vintage steeds were going in a completely different direction and we were on the ride of shame back home. We had started well when the group left PortLaoise. Stoker and tandem owner, let’s call him Bram, laughed devilishly and said “by the time the sun goes down you’ll be mine forever”. Oops, wrong Stoker. In fact he said “I’ll clip in and we’ll push off”. We managed the perfect tandem start. It was one of many on our eventful vintage bike ride on Laochra na Laoise.

Laochra na Laoise is the brainchild of DBC and today was our third run. No one would guess that Co. Laois is a secret climbing cyclists haven with very good roads [mention appropriate Minister’s name here] and nearly no traffic. With his vast knowledge of the roads and ways of the Queens county (there was a referendum you know) DBC each year has produced a new route each with scenic views and charming villages with spectacular names. Did we really go through a village called Spink or was it a dream?

As ever this is a vintage racing bicycle run with each person bringing their latest oldest bling and much discussion about patina. But for Bram and I this was not about patina, it was about punctures. Punctures quick and punctures slow. Punctures due to an ancient narrow racing tire (on a tandem, really?) and punctures due to protruding spokes through the rim. That should have caused alarm bells but I was so focussed on my magnificent solution – no act of charity is foreign to the Society of St. Vincent de Paul – I didn’t trouble myself too much to discuss the wherefores and whatnots. 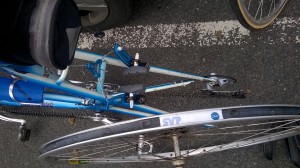 That was left to those cycling behind us who notified us of our back wheel resembling the straight walk endeavours of a drunk in the early hours of the morning. Our day was doomed and our hangover was fast approaching. We cautioned those around us to stay nowhere near us (“she’s about to blow captain” Bram the stoker might have said) and we pulled in again. We borrowed some spare tubes (thanks DBC) and set off for the short-cut to food stop of Abbyleix. The others took the long-cut there…. and were still there before us.

Our ride back was pleasant apart from the annoying fact that by checking our GPS position on my smartphone I lost the data to my strava app. Oh and apart from having to stop innumerable times to inflate the ever deflating tyre. Oh and the annoying pump that did marvels for my biceps and feck all for pumping. Oh yeah, and apart from the near death experience on that corner somewhere near Spink. My God that place really does exist. All that said though I’m a fair hand at tandem starts now!

As ever thanks to DBC for the fantastic route and his wife, child and in-laws for putting up with his absence (avid readers will note that for every vintage cyclist there’s a near village of family members and friends who put up with our passion). Thanks to all the lads who turned up from at least 7 counties especially Bram and his blessed tandem. As has been mentioned elsewhere great thanks and recommendation for the Gallic Kitchen in Abbeyleix for their fine fare, great prices and lovely welcome. Merci merci – there’s something about tandem riders and doing everything in twos (but I won’t be repeating that ride again!).