“Make sure you’re standing on the pedals on the start line” said my buddy Thor.  He would start 5 minutes ahead of me and so I watched him go.  He promptly tore up the rule book, and the road, and hammered home.  Time ticked on as I waited for those minutes to elapse.  “Number 52 please”.  “Wheel to the line”. “5,4,3,2,1, Go!”

‘You can do this’ I intoned.  Don’t go out too big.  Change gear at the 2nd pole, try to get to the house entrance, onto the second ramp, pull back the big gear lever.  Am I going well?  Am I hell.  I was getting to hear full sentences from spectators, oh dear, but their encouragment helped.  The third ramp, a grab for 28. Silence. Then beep beep beep beep.  My heart rate monitor woke up to tell me I was working hard.  This is good.  I can’t really feel my arms.  This is also considered good.  I register a shutter click. I hear sounds that tell me that I’m someone else’s minute man. 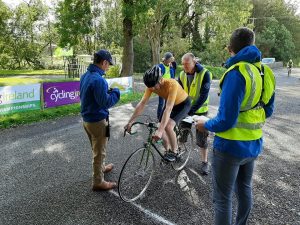 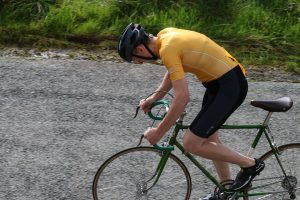 My machine has stopped beeping, I’m at the point I should gear down, I do.   I feel god awful slow.  I can’t believe it I need 28 with 400 meters to go.  A man shouts “200 metres”, but I know it’s not so.   I sense I’m being reeled in, but not yet.   Can I just get to the crowd before him? I can’t. Like me he turned up as the event was ‘just down the road’.  Now he has something to show.  A friend shouts my name, in sympatico, others do too, they all helped you know. I’m across the line, sweat soaked, gasping, spluttering and wondering, what am I doing here?

It was the day before the National Hillclimb Championship, and I had just placed 2 Mafac brake blocks into the kitchen weighing scales.  The children, eyeing me suspiciously, asked if I was baking.  To them I may have been.  No, the period correct Mafac brake blocks, scavenged from another bike, were the final touch to my weight saving scheme.  At least so I thought, as a rather different weight saving scheme was fermenting in my lower intestine, but I wasn’t to know that yet.  I was concentrating on the bike.

Mine were not the only domestic appliances to be called into service these past few weeks.  My friend, Thor Mentor, who had talked me into this escapade, was being investigated by his wife for the removal of the digital scales to the back shed.  He must have taken the home calculator too because come race day he was on a completely different bike.  “Does anyone have lightweight wheels?” he asked and ended up with a kilo saving bike. 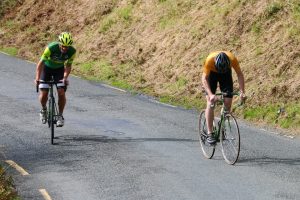 This madness had only started a few weeks ago.  Thor had gone on a medal grab on the East Coast and had come home bronzed and eager for more.  I got caught up in his ambition.  “It’s only down the road you know”; “they need the entries”, “it’s only 5 minutes of pain”,  “I don’t think you’ll be last”.  Well who couldn’t refuse such encouragement, he had had me at ‘just down the road’ anyway.

Thor and I assessed the gradient of the Championship climb and wondered where we could find something to replicate it.  It needed to be close enough to our work commute that we could not be accused of ‘even more cycling’.  I recalled a road that brought me no happy memories.  It had been  20 years since I’d driven this road for a failed house purchase, a road that was once full of promise but ended up in torment.  Road, hill, promise, torment.  That would fit the bill, but how about the percentages? 11% – 15% – 13% – 17% – 12% -8 %.  Bingo.

We took to riding that climb multiple times.  A twisty old beast, we surprised more than one motorist nudging down it. Thor would take off, me in his shadow.  He would continue, I would blow-up.  Twice some mornings, three in the evening.  Of course it didn’t get easier, but yes slightly faster. 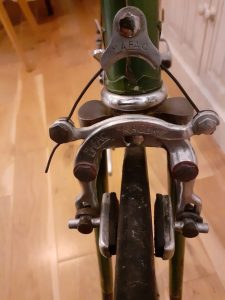 Witches Boreen, the week before

The weekend offered new training routes away from the commute.  Some hills were too short, others too long and too easy, another just way too hard.  I felt like Red Riding Hood on a bike when I found a Strava segment “Witches Boreen to Red Head Cross”.   Hours snatched here and there found me puffing and panting to blow a friend’s KOM down.   Finally, on the day before brake block gate I bagged it.  While it only replicated the start, at this stage I believed in the fairytale… 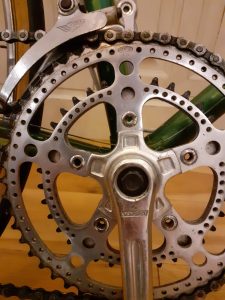 France, A hundred years ago

Once upon a time, one hundred years ago, in a town called Sully-sur-Loire,  two brothers began manufacturing bicycles.  What to call their fabulous machine?  Helyett, why not, after the French opera Miss Helyett, about a young woman whose derrière is bared by chance and commits to marry the soul who saw it.  I kid you not.  One hundred years later another derrière was very close to display on a ditch on the Cork Kerry border. It too would soon be committed to a Helyett.  Uncanny.  I kid you not. 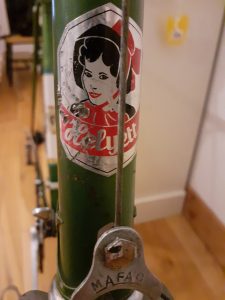 My 1962 Helyett, now my lightest of bikes, however was not dedicated to the lucky young woman whom providence conspired to marry her lover, but to the man the French called the malchanceux, the unlucky one.  Shay Elliott rode such a bicycle to losses, mistimed punctures, crashes, accidents and, on this day of the World Championships, to an unlucky 2nd on a thwarted podium in Salo.

As Thor and I pounded the pedals and crunched the gears on our training rides the need for more and more gears became obvious.  The original gearing on the Helyett was 52/48 x 14-24.  This was not going to work!  A recon ride in Co. Kerry determined the necessity of a 36tooth front ring, but it was beyond the gear mech.   Thanks to a donor, I had access to a 60’s Simplex Juy derailleur body, and more importantly, my climbing gear.  Little did I realise I would have to count on it so dearly. 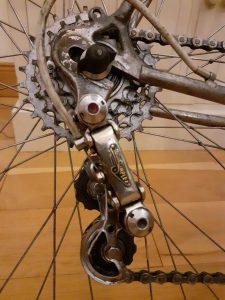 Thor and I agreed that we would travel together to the event, accompanied by YoungVelos.  We were greeted with a hearty welcome and ‘thanks for coming’ by Tralee Manor West BC, their blue shirts matching nicely with the Cycling Ireland commissares.  This is a national title.  If you’re serious, this is serious.  Thor was serious.  Tyres were pumped, legs were pumped, headphone music pumped.  Up and down the road  competitors studiously avoided one another. Gels and jelly babies were chugged. Thor put the hammer down.

Later, after Thor collected another national medal, I scrutinised my ride.  “Errah” says he, “look at it this way.  You got the most value out of your entry fee, you were out there the longest.  Chapeau!!”. 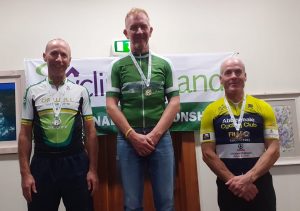 Thanks to our hosts Tralee Manor West BC and volunteers, Cycling Ireland commissares, photographers Maura Lynch Moriarty and Jim McSweeney, fellow competitors, and, for the likes of me, especially the spectators.  Congratulations winners and podium finishers, including you Thor!!  You’ll find them all here https://belgianproject.cc/2019/09/29/the-irish-hill-championship-2019-at-the-crag-cave-in-glounsharoon-kerry/

“It wasn’t paved back then, you know? I live near the top. Just wide enough for a pony and trap. But I saw a lad on a bike, one of those old big black bikes you know.  He climbed it on a big black bike!  We were all talking about it.  He turned up again the next week, on the big black bike, but he had tied a weight to the back of it. He climbed it straight, on that big black bike. Iron Mike, that’s who. Won the Rás in 1958” 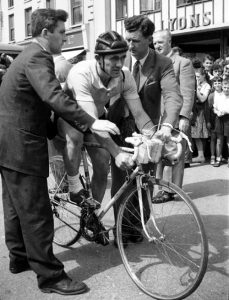