Riders will tough it out on a 170.5Km stage set to test the riders on what is Bastille Day.  Beginning with a tough steep hors category climb and including a 3rd cat climb, riders are expected to……hold on a second that’s the TOUR DE FRANCE!!

Meanwhile in Kilmacthomas, OldVelos Cyclists will take on some challenges of their own.  All riders will depart from Coach House Coffee and progress northwards towards Fews.  There then follows a series of right-left turns on beautiful byways eventually bringing riders to the base of the infamous Scrouty climb, not that they won’t have expereinced a few hills by that stage too.  Riders will savour views of the Comeragh mountains and taste some sweat before descending into Portlaw and proceeding along the gravel drive for a break at Curraghmore House. 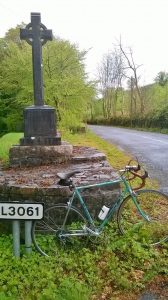 Medium route riders, despite having their bellies full, will exit Curraghmore House at it’s western exit and proceed through Newtown and back to Kilmacthomas.  Yes, there’s a bit of work for them to do, but it’ll be worth it for the barbecue. (Overall 30miles/50K – 2,250feet climbing) https://www.strava.com/routes/19969446 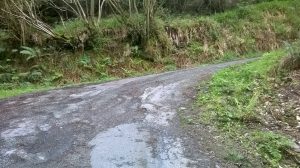 Long route riders, retracing thier steps, return to the main entrance of Curraghmore and proceed through Portlaw.  With their mouths full of buns and bonhomie, they need to keep their eyes open for the OldVelos signs as they take a left off the Carrick Road along a sweet climb that will, eventually, bring them to the promised land of Carrick-on-Suir.  They must however promise not to cross the river, but remain on the Clonmel road, again with their eyes open.  OldVelos have found roads Strava doesn’t believe exist, but they do, we rode them! The left AFTER the turn for Rathgormick bring riders up Tour de France style bends and along beautiful boreens eventually reuniting them with the Clonmel road. 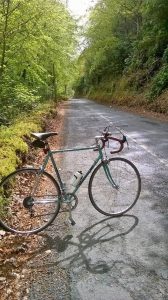 Reuniting themselves with their largest cog, cyclists switchback on to a wooded ascent, going on to enjoy a fine descent onto the Rathgormick Road.  The Rathgormick gallop does just that, but they’ll have to hold their horses as they take a right turn just after the village which brings them back to last years dreaded 15% hill.  Perhaps it’s because of this hill that nearby Fews is called so, as so many have blown on this hill.  Nearby too is Kilmacthomas, passing event supporter Flahavans riders return home on the Greenway to Coach House Coffee and the barbecue. (Overall 55miles / 88K – 4235feet climbing) https://www.strava.com/routes/19960565

So yes, we’ve shortened each route by 5 miles – for safety’s sake – but rest assured what’s lost in length is gained in height.

Please register if you want to take part in the event using the form below:-