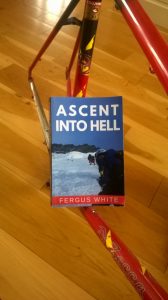 I always read 5 star reviews with the suspicion they are often written by friends of the author.  Well let me admit at the outset that I am a friend of Fergus White.

Fergus appeared in our cycling lives in the late eighties, and quite like this book, appeared out of the blue and amazed us.  It wasn’t just that he didn’t have to toil up the Wicklow mountains just like the rest of us, it was that he always got up to the top ahead of us.  Just like his attitude to the experienced high-altitude climbers he regularly doffs his hat too in Ascent into Hell Fergus didn’t disrespect our experience or bike knowledge, he was just undeniably better than us.  This, as I recall, led to the beginning of many uninformed discussions on the bike shop floor about VO2 max and nasal air intake, as well as ‘he seems a terribly nice guy’.  I admitted from the outset this is written by a friend. 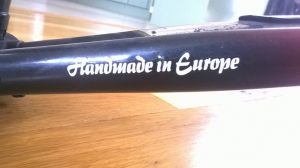 Apart from irregular check-ins via the internet or hearing tell of his appearance on the bike shop floor our paths diverged.  So, when I heard Fergus had returned to Ireland and was looking for a good home for his old Irish made Di Zecca racing bike, I was delighted to make contact again. 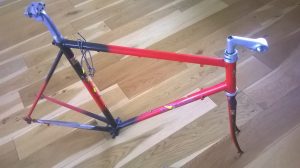 I enjoyed a few jovial meetings in his home yet I couldn’t help wonder about the furry boots he wore.  I couldn’t get him to commit to the bike, not until summer anyway, he said.  I was sad about that.  The last time I saw Fergus was about a year ago to present him with a copy of OldVelos’ book of vintage cycling tales Trouble with the Youngest  with a short inscription recalling him cycling the Wicklow Hills.  A bit of a ‘pick me up, back to the bike’ encouragement, I  hoped.  A year later I received this:

Trusting all is well in chilly Cork.

About this time last year, you handed me your book of your cycling endeavours. I now match your offering with my own sporting words in an ebook: https://www.amazon.co.uk/Ascent-Into-Hell-Fergus-White/dp/1973422719

If you’re prone to reading ebooks on a tablet or Kindle, it might tickle your fancy. Or if you know someone who might be interested in the subject matter, you might mention the book to them.

He hadn’t mentioned this once.  Not the attempt, not the endeavour, not the book.  I knew nothing of Everest, nor how well he can write.   Prose for the scenery, lively for the camaraderie, falteringly for the oxygen deprivation, breathlessly for life.  And to think Fergus wrote ‘Match my offering.’   Now, nearly 350 pages later I know more about Everest than I could have imagined.  I know of effort, disappointment, pain, fear, friends won, lives lost.  I know of the monumental struggle between one step and the next. And the ability to go on, and the need not to.  I learn the fine lines between clear thinking and certain death.  Ultimately, whether Fergus (his great buddy Greg, their team and amazing Sherpas) reach the summit or not becomes inconsequential, but even though you really want to know did he, really you just want him to get back home safe.  Buy this book