I was far too far from Cork when I realised I had left my racing legs behind.  It was a stupid oversight considering the long hours I had lavished on my bikes preparing them for the National Cyclocross Championships.  At least two hours of meticulous cleaning and buffing my vintage Alan’s aluminium tubes and lugs. Another 60 minutes devoted to regreasing a Shimano 600 hub and a lifetime considering tyre options on my eponymous seventies Hennessy.  Yet there, on the piano at home, lay my new racing legs. New to me anyway.  I was already half-way to the race in the Glencullen Adventure Park in Wicklow when my pre-race mental pep talk was interrupted by the realisation that an important part of my kit was keeping the piano warm rather than doing the job for which it was intended. .

To be honest I’d been doing fine with my God given legs despite plenty of insulation.  While I hadn’t my father’s calves (bullocks really) I did have my maternal sides sporting sinews and all in all they had held up well during the year.  I didn’t think about them much during CX training because they were in winter tights most of the time but when the Munster league started in earnest I did detect a few odd glances.  OK, I had let them go a bit recently and the early years of shaving now gave the type of yield a market gardener could only dream of.  I thought at one stage that I heard my eldest refer to me as ‘Chewbacca’ but it might have been my imagination.  But they were my legs, they had served me well and, I have to admit, I’m not great at change.  That was until Thurles.

It was a mud bath at the CX race in UpperChurch upon Thurles.  The dirty, dripping, filthy, mud spattered mellee at the finish line was a sight to behold and I am only talking about the spectators.  As for the CX cyclists, well to paraphrase that well known ’70s band  Wings:  “Give Tipperary back to the Tipperarians”. That’s when the doubts set in.  I had a good hard luck at the state of the legs I brought home from that race.  Mud was stuck to the mullet in my popliteal fossa area (look that one up!- Ed), I had a pain like a splint along my left thigh and my right knee was making noises I could no longer cure with copious amounts of Voltoral.  A well-intended Facebook message from a fellow competitor tipped me over the edge.  “Hi Bren, tough course out there, you’re some man to stick to those legs”.  That was it. No sign off, no response to my ‘?’   reply.  I tossed and turned in bed that night trying to decode what the ‘stick to those legs’  message really meant.

The next day at work I furtively logged on to eBay during coffee break.  A trick I learned was to type in exactly what I wanted, usually narrowing it down in advance to ‘Sporting goods’ was sufficient.  N-E-W R-A-C-I-N-G L-EG-S.  When I started getting offers for four legs I realised I needed to specify ‘Cycling’ in my search.  Suddenly lots of NOS, Buy-It-Now, Best Offer choices appeared. Unfortunately, the dimensions were in centimetres and the shipping prices were outrageous.  I needed not only to narrow my search, but change the market to Ebay UK.  While the pictures now took on a much paler hue at least the auctions were in lengths I could recognise.  OK, the legs looked a lot gnarlier, from years of TT’s I suppose, but that’s not all bad for CX.  I mean I wanted something that could put up with pain, that I wouldn’t be protecting in case of spills and anyway the English are good for looking after things. They even wash their cars on Sundays, so my hopes were high for how they looked after their legs.  The CX season being short I went for a Best Offer choice and sent a little message suggesting they were going to a good home (and could we do a deal on shipping?).

They took longer to arrive than expected and sadly I didn’t have them in time for the Munster Champs in Killarney.  But even the promise of two new-to-me legs saw me cycle with more abandon than heretofore knowing what would soon be in store.  It was as if my old legs were giving it one last hurrah, and heh, nothing ventured nothing gained, no hard feelings and all that. I finished last, but only I knew it was for the last time.  The legs duly arrived and I signed up for the ‘Team WORC’ National Champs (I think they’re called ‘Team WORC’ as ‘Team Pain’ had already been taken).  For my pre-race work outs I stuck with the old legs – the training grounds in the woods were full of slippery roots – and my intention was to have one final training session with the lads using the new legs.  Unfortunately rain delayed play and the lads started getting windy about doing the event at all.  Oh well I thought, I’ll just use them on the day and returned to sweeping bits of Tipperary back into the yard, polishing my bikes and feeling anxious about tyre choices. 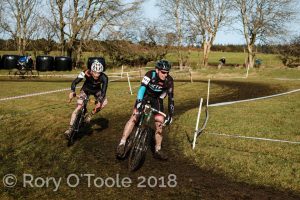 I stayed overnight with my parents in Greystones, but I wasn’t good company.  By 3am on the morning of the race I had revisited every conceivable reason for this calamity and every psychological trick to overcome my stupidity.  Here I was, 160 miles from my new legs, and equidistant also from when I should have fallen asleep and when I would have to get up.  And all the time on a piano in Cork lay my lovely new legs.  I must have eventually fallen asleep seconds before the alarm tazered me.  I lifted my old legs out of bed and let the hairs fall into place, I rubbed down the left side of my thigh and reached for the Voltoral.  At least the morning sky showed stars and the promise of a dry race. 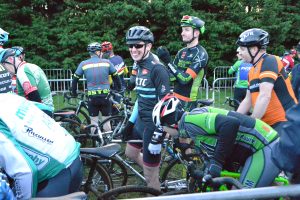 I usually enjoy the pre-race banter and all that goes with steering two vintage bikes through the melee but then my mind would turn to the thought of my eBay best offer legs on the blooming piano.  I couldn’t enjoy the admiring glances, the nice comments, nor the repartee with the Northern boys about the size of my frame tubes and them saying ‘bet the skinny f£$%^r can go fast too’.  ‘Oh well’ I thought ‘here goes nothing’ as I lost the opportunity for my prerace warm up when we were ushered into the holding pen a half-hour in advance of the start.  My old legs started turning blue as the wind swept the hairs from side to side.  I thought of my new legs, freshly ‘Immac’ed and all, lying on the piano.  I distracted myself by chatting to my Facebook friend from the Thurles race but didn’t want to mention the legs unless he did. “How are you going?” I asked.  “Good, tough course though.  At least not as boggy as Tipp”.  “True” said I a bit curtly as the timekeeper talked down twenty seconds to go. “Well fair play to you for doing it on those legacies”.  L-E-G-A-C-I-E-S??!! After all the expense on my new legs he was talking about my bikes. Well, watch out folks, along with some bikes and other vintage parts I might put them up for sale on OldVelos website free classified ads.

Brendan Hennessy rode the Masters Irish National CX Championships alongside fellow OldVelo (and MCTC member) Peter Meaney, ably supported by Alec Darragh in the pits.  Brendan completed the race on a 1981 Alan and 1970’s Vintage CX frame from France.  So did 58 others, all ahead of him.  Congratulations to the real winners.  Big thanks to Team Pain [correction WORC], their volunteers, hosts GAP, Cycling Ireland and Rory O’Toole, Seán Rowe for the photos and, of course, his parents (to whom he  thanks for the legs he has). 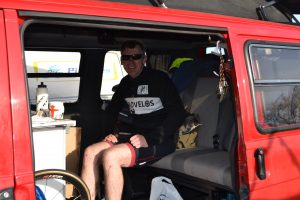