O’Loughlin triumphs over Power of the cross.

The world’s media never gathers in Mallow.  Today was no different.  But today was no ordinary day either.  Three first-class sports photographers, cycling their speciality, gave up their bank holiday to give witness to the ordinary, the common, the week in-week out pleasure, enthusiasm, love and camaraderie of the provincial Munster league cyclo-cross competition. 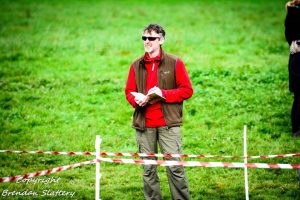 Karen M. Edwards, Brendan Slattery and Seán Rowe are blessed with the ability to understand the light, the darkness, the focus, the soul and the resolution of the club cyclist.  The iconic image they want is already framed in their mind’s eye, but they know their audience too.  That audience is woman and men who devote time to their PC  (when they should be working)  examining in detail  200 plus images of self and friends in the hope they will find something uplifting that will give testament to the preparation, pre-race power and post-race pain.  Revolution Cycling Club in Mallow offered all of the above at the Pi Cycles sponsored Revolution Cross event this Sunday.  Well pain anyways.

The B-race is a microcosm of cycling, around 40 minutes of penance.  About the time it takes to make the perfect pie but it would overdo the potatoes, about the time it takes for a good ‘High Mass’.  There were 5 rows of 5 of the faithful behind the white line, all ready to do their weekly penance.  One wily lad inveigled his way through to the front, more wished they’d done the same, no one likes to spend time in purgatory.  Further back another stood astride his bike, looking with askance at the situation.  There were gentle conflabs, worried glances, words of wisdom and no doubt the odd quick prayer.  Whatever the level of experience it was willing to be shared. In the minds of some of the older riders was no doubt the famous quote of Fausto Coppi  ‘Age and treachery will overcome youth and skill’. It gave them some solace when they thought of the 40 minutes of hell that they were racing into. 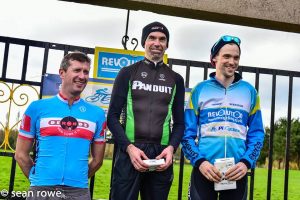 Know these names as your own because with some small effort you could be amongst them.  A son, an uncle, a nephew and a father, not quite the ‘Holy Trinity’ but none the less a group of the faithful .  On the line there was tussle for sixth and seventh place which deserves special mention.  On the finishing straight, above the roar of the crowd, a voice could be heard ‘Move on Bren…He’s about to catch you’.  With that Brendan Coakley’s spuds were definitely overcooked and Jamie O’Donoghue took his slice of the pie on the line. The shout was not inspired by rivalry, but camaraderie.

From the start, the pointy end of the race had the same hue.  For those who choose the makeshift bridge vantage point the view was like one from a lofty Mass rock. It was a good place to listen to the encouraging cries of the riders’ support groups, the most enthusiastic cries coming from the children.  Of course there was great support for local heroes  “Go on Eamon”, but “Go on Daddy” was more common, as well as cheering  the over 5’s were asking more searching and at times embarrassing questions . Dave O’Connor must have peeled the spuds the previous night.  He was out of the traps and had them into the power boiler by the time he ducked under the bridge the first time around.  He just needed the celebrant, Fr. Paul Birchall, to say a quick mass.  No such luck, as not only did Messrs Power, O’Loughlin and Horgan arrive late for worship, but by the second lap they had managed to work their way up to the front pew unnoticed.  The steam was rising for Dave, but had he put in enough water?  By the second lap his son asked “Is Daddy third now?”

One place of vantage leaves many places unattended.  What happened around the cleverly designed course only the riders will know.  But change was afoot and change presented itself to us on each ascent of the ‘Mass Rock’.  Had something happened on the steep embankment that left some of last years’ racers in the river?  Further afield did slippages slump some riders in the woods?  Only they can say but Karen, Brendan and Seán may have a visual record, be warned!.  All we could see was change.  But some things stayed the same.  Like the time gaps between the leading riders, their pursuers and the followers.  Study the lap times for their effort because the growing gaps made us think that some people had forgotten to put their watches back for daylight saving.

“Revlolting Cycling Club – that’s weird” said a precocious child as she tried to decipher the graphics of the new leader’s jersey.  Dave had been replaced by John Power, allegedly a novice to cross, but that did not stop him having a go and also poping his prátaí in the steamer.  They’ll cook in the right time as long as you keep the temperature even.  He did so for the next three laps.  All he had to do now was to stay upright and John was going to be in the top three and he keep his hosting club happy.

Over the full five laps each of the four leader’s pilgrimage to the ‘Mass Rock’ was different. 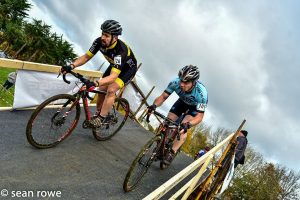 For one of the faithful it was blind faith, a no-nonsense belief.  Another choose non-angelic acceleration and a type of miracle occurred and he freewheeled to the summit, someone else arose gracefully holding his pedals on the lip of the plateau like he was about to sip from a chalice, but most of all chapeau (or should it be biretta?) to the devoted pedaller, the skilful one who rode the boards knowing just when to push through, timing his refrain like a weekly mass-goer. Lord have Mercy.  There was a chant from the congregation on the rock as some of the underage riders passed  “don’t pull the brakes on the way down”.  Those who sinned were kindly shepherded back down by volunteer marshals from what otherwise could have easily turned into a sacrificial rock.

Back down the field riders marshalled each other. Pairs had formed, not fighting combatants, but yet unyielding bedfellows.  Steven Darby and Owen Mullowney; Will Rock and Sen Dineen; Eamon Sweeney and John Carey, all finishing within seconds of one another.   These pairs I particularly look forward to watching through the eyes of the heavenly  drone – a new development to accompany still photography.  Did they notice after they climbed the escarpment in tandem that they were facing something George Lucas could only dreamt of and a real act of faith was required?   And unfazed children asked after their fathers underneath.

For some children Daddy didn’t arrive for the fifth lap.  Carlton Haddock had punctured and despite persevering from lap two to four on a puncture, foliage and mud combined to afford him a DNF.  But alas for John Power the fifth lap was a revolution to many.  Martin O’Loughlin had chosen a self-timing steamer, and keeping his dinner over a steady heat he eventually stuck the knife in and found he had timed it just right, soloing to victory in a salute that reminds us the key ingredient of cooking, timing.  The top table were Martin, John and Jim Horgan…. but a mention to Craig Moynihan whose race number 123 earned him a 4.  And to Dave O’Conner, you may have steamed ahead, but you kept going despite the other diners and you didn’t give up for your place at the table. 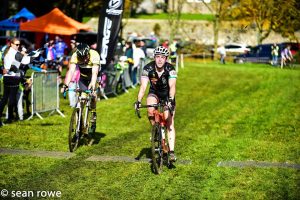 This is usually a vintage blog, but let’s make it a visual one today and direct you to the great pictures of Brendan Slattery, Seán Rowe and Karen M. Edwards.  Facebook should be sufficient, but why not visit the event organiser’s page at Revolution Cycling Club.  After all their efforts they deserve a ‘like’.