“We were somewhere around Clonmel when the drugs started to take hold …..” (Hunter S Thompson 1971)

You would expect in a cyclo cross race one would prefer to be ahead of following riders  but today’s horse race track offered a bit more grass and speed and I was willing to suffer tyre shrapnel for a bit of shelter.

The course seemed wider than Fota and certainly there was less roughage than in Ennis.  Some Nurofen were keeping last week’s calamity at Fota, and two ‘clickety’ ribs, far from my mind. Yes, the drugs were definitely starting to take hold but I knew this time to stay on the verge of safety and not just the grass.  Yet, the stand-off I was in was really playing on my mind.  Would he not just come through?

Despite repeated calls for the presence behind me to take a turn he doggedly refused to come through.  I called him every name under the sun I was squinting in to until I realised I was becoming breathless in the effort.  I just had to refocus and concentrate harder on getting the right line.   If he wasn’t going to come through I’d just have to ride him off my wheel. Once again I thought of  lines from Fear and Loathing ‘No sympathy for the devil; keep that in mind. Buy the ticket, take the ride….’ 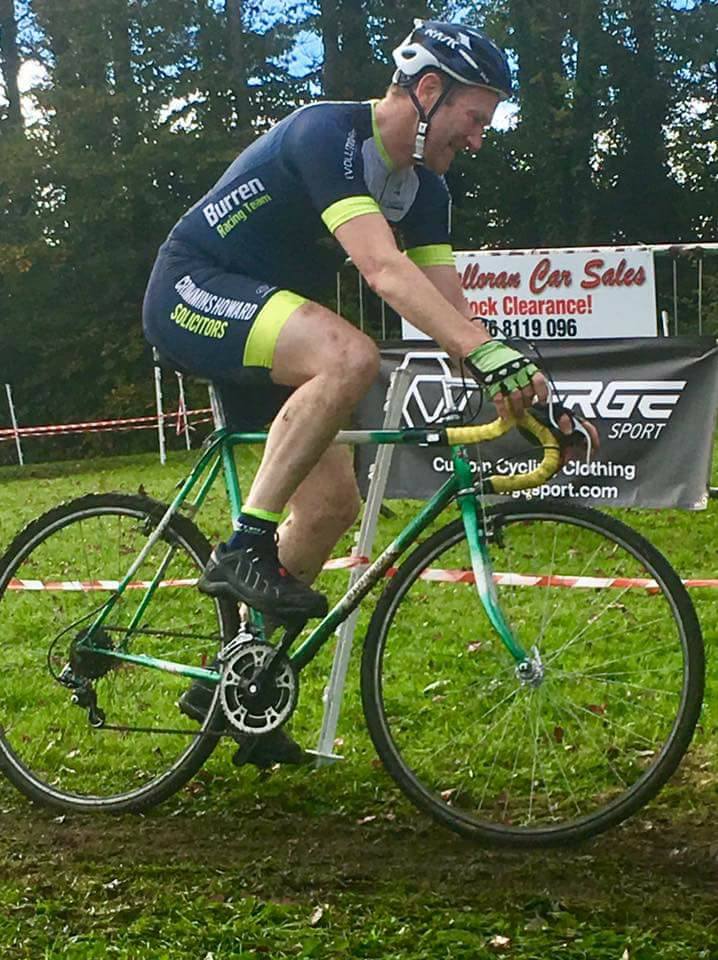 The long turn after the finish line offered me a chance to do something I’d never usually do, I feigned cramp.  (In a closed society where everybody’s guilty, the only crime is getting caught. –HST 1971) ‘Aah’ I cried and yanked my foot out of the pedal.  He remained on my wheel and I angrily clicked my foot back in to the pedals with such force I skinned my ankle off the chainset.   Was this an A-rider who was just warming up out of sight of the commissares?  The tight course turns meant I couldn’t look back and I knew shouting was useless.  Getting more annoyed I pulled out of a tight ninety degrees. Some specks of rain fell and my shades became redundant.  The grass became slippier and I pushed down on the front forks to ensure a safe line, this time just tapping the stake and shivering thinking about last week.  And with that your man was gone.  ‘Fear and Loathing’ I thought and then wondered why does Hunter S Thompson keep entering my thoughts? Then I realised that might make a nice title and theme for next week’s blog.

‘Fear and Loathing’ I rhymed ‘change gear and big ring’.  This was the first race in the Munster CX League where I had the courage to use both bar end levers.  I had given two riders my vintage cross bikes in Ennis when pinch flats showed little interest in the meritocracy of modern machinery.  When they returned the bikes they were both in the big ring. I marvelled.  The biggest ring it had seen before that was very close to the rear spokes.  But then AJ Murphy and John Maloney are amongst the A-riders and if it’s a 36 ring for me then it’s 46 for them; if there are obstacle planks they glide while I manhandle; if it’s a rocky crevice they pedal as I muddle.  Usually our only equality is in enjoyment, sometimes ‘OldVelos’, but for today it was the big ring 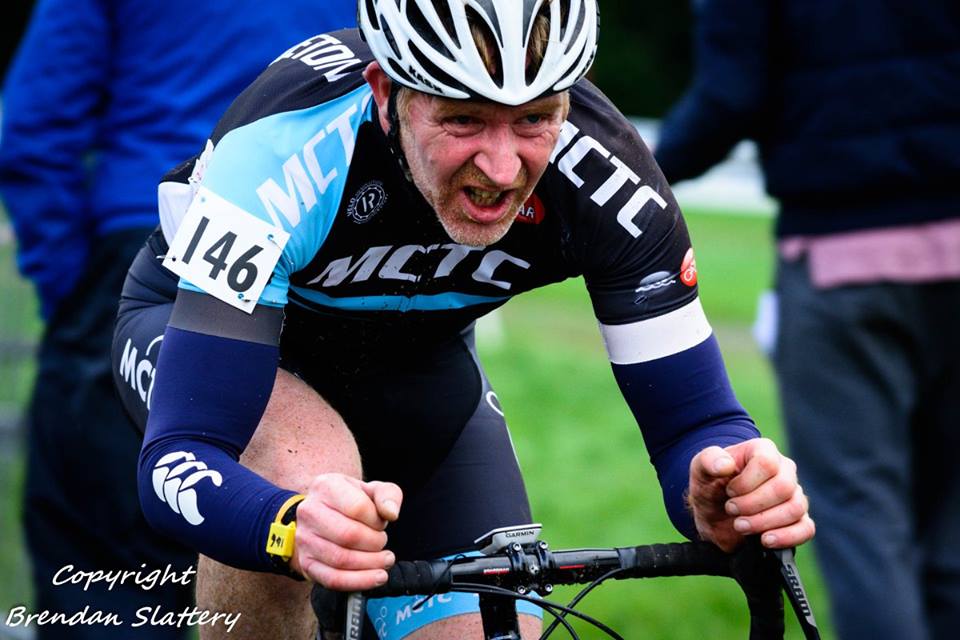 Just like the onrushing clouds, the thought of that chaser was darkening my day.  The rain became heavier and had transformed the benign knolls into slippy pistes.  And we were trying to go up!  I charged the first one and just retained enough grip to crest it without falling.  I was gaining on the riders ahead and learnt from a faller in front to get the foot out and ‘BMX’ the slickest part of the grass. Despite the width of the course everyone was choosing the same line, carved out by countless Schwalbe or Continental 700x 35’s I guessed.  The UCI would have a field day disqualifying some of the tractor tyres on show today (wider than 700×33 is forbidden, and that’s after testing with measuring calipers Tom Mulqueen had told me).  They made a nice line though and for once I felt some benefit from my skinny 700×30’s.  At least I had shed ‘your man’, and I was making ground. A lap to go.

The open course gave less shelter than the previous two and the autumn breeze began to push through.  Nature decreed enough rain had fallen and as we approached the chicane the low rays of the October sun reappeared from behind the disappearing clouds.  My choice of sunglasses was proved correct.  The radiated warmth on my shoulders from the black MCTC gear upped my morale and made me think of my best B-placing all year.  Top twenty perhaps, maybe 15 what with the Killarney men, Ken and Michael moving up to A and trading in their MTB flats for ‘bendy bars’. I sped up seeking out some targets.  Determinedly gripping the hoods I advanced forward and for the first time in ages I felt good.  Looking down at the chain gripping the big ring and the grass rolling by I realised he was back.  As silently as he disappeared he reappeared.  THERE. IS. NO. WAY. YOU’RE. PASSING. ME. OUT.

I fought on, this time my shoes were staying in the pedals and it was going to be 46 teeth all the way home.  A combination of the sun’s rays and my effort steamed my glasses.  I didn’t care, I knew the course by now. I’m not crashing again. NO WAY.

The  winners were being applauded ahead but here in the final turns I was in my own battle.  I hit the makeshift bridge with a thud and when I didn’t hear any wheels behind I relaxed back.  The long bend ahead changed the wind direction and what I couldn’t hear I could see. He was back again.  I rose to sprint. ‘Damn’ I thought, ‘I’m showing my hand going too early’. His presence snook alongside, mirroring my style.  One more bend ahead and then onto final straight where I knew my wife would be squinting toward us.  The heat from the following sun had stuck my jersey to my back.  Stealthily, gripping the drops just like me, he too rose, shoulders stooped, head down, pushing 46×14 and silhouetted over the line in front of me. 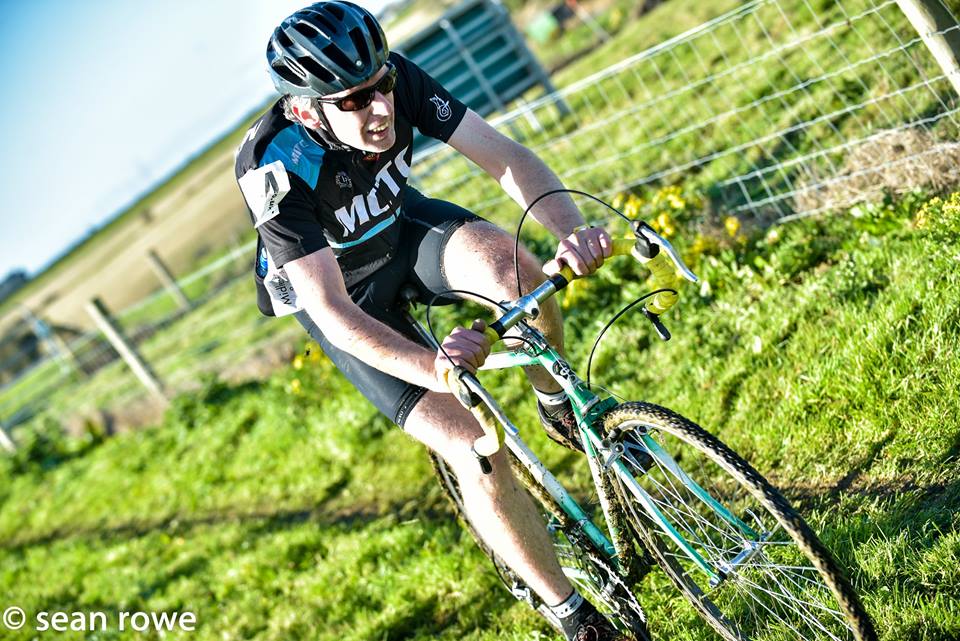 I took a long look at my shadow which had overtaken me on the finish line, shook my head in disbelief, and thought no wonder horses wear blinkers on race courses. And with that, well done to riders, organisers Clonmel CC and volunteers at Clonmel Race Course. Hopefully I’ll be mended by Mallow and get back to writing fact. I’m missing it.

One last quote from Hunter S Thompson might be apt: “Maybe it meant something. Maybe not, in the long run, but no explanation, no mix of words or music or memories can touch that sense of knowing that you were there and alive in that corner of time and the world. Whatever it meant.”