My recent foray into a hedge on a two-wheeler made me double-think this whole tricycle business.  Not only had my 1957 Mercian Tricycle tried to kill me, maim my friend Stefan and smash my neighbour’s gatepost, it now robbed me of the very reason I came to acquire it in the first place, my love of cycling.  What if, in my haste to master the Trike, I could no longer balance on two-wheels?  I couldn’t recall selling my soul to the devil and there was no way I had chanced a crossroads.

Yet, every time I considered the Trike I was again drawn into its mystery.  What was it about this infernal machine that kept drawing me back to it.  I knew I was smitten. But why?  My first assumption was history.  Being an old machine from a very reputable builder, I sent pictures and the frame number to Mercian.  There I was Granted an insight into how often the frame builders are asked the hopeful question ‘is mine a Mercian?’.  Alas, the friendly answer was uncertain as the passage of time, a fire and lost records prevented clarity.  “To give you a firm ‘Yes it’s a Mercian’ is very hard to do.”   Now I needed to rely on the extensive knowledge of the wise sages in Tricycle Association of Great Britain, the ‘Alice’s Restaurant’ for the aficionados of 3 wheels. 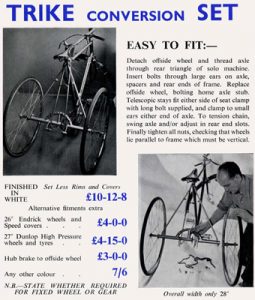 In the song, Arlo Guthrie’s makes the extraordinary claim that ‘You can get anything you want at Alice’s Restaurant’ and I believe that maybe in the innocent times when he recorded the song he may have believed what he was saying. My faith was not quite as blind as Arlo’s, all I wanted was information, insight and guidance from the GB group.  First there was just one response, then two responses, then three. According to Arlo’s ditty, this is an organisation.

“I was told that a lot of their records were missing. I have seen a few”

“A friend of mine has one in the back of his shed, keeps threatening to get it back on the road.”

For Mr Guthrie, this was fast turning into a movement. I was now more confident it was a Mercian, and I was quite sure mine was the only one in Ireland. So, if my question of what was now skulking in my workshop was by now presumably answered, there was still a ‘why’. Why was this damned thing so attractive? My GB friends made me ponder another deeper question:

“More photos please and what plans, keep as is or renovate?” 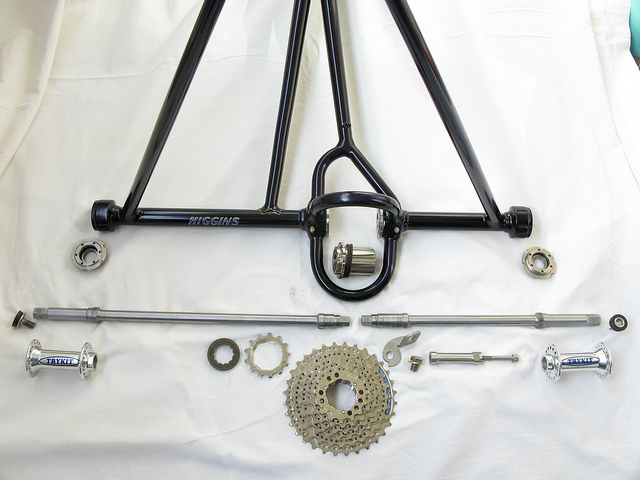 Herein lies the quandary of the cycle collector, keep as is or renovate.  There are countless blogs, threads, fora to that kind of thing.  Here’s my contribution.  The bikes I’ve earnestly restored to factory finish remain unridden (including another Mercian), those that are left ‘as is’ are lovingly repaired and then ridden.  What I wanted to do most of all with this Mercian Trike was to ride it.

If you haven’t an earworm already, I want you to forget the refrain of Alice’s Restaurant for a moment, as here comes another.  A visual aid first: cue a 1930’s Morris 8 descending gently through some rolling moorland, passing drystone walls and wooden gates, cresting a village bridge – got it yet? – Siegfried laughing to James, and then the Morris sweeps down a bend and splashes through a ford.  Yes.  Da, da, da, da, da, da, da, Dah, da, da, da, da. da.  The TV series All Creatures Great and Small. I hope I have the notes right [ED- that may be artistic liberty)!

Simpler times.  Folk Wisdom.  Women, Children and Animals.  Moors and Dales.  TB and Vaccines.  Pure Snow.  Summer Smells.   Mrs Hall.  Shire Horses.  Tricky Woo.  War footing.  Dinner Dances.  A tricycle.  Well, never a tricycle, not so far, but there could have been, couldn’t there?   Where else could I get that OldVelo feeling of tranquillity but by riding my Trike along carless country roads, taking in the views and smells and sunshine of the landscape.  [How well do you know this Arlo fellow? Did he give you something to try – ED]. Yes, the sunshine I can imagine, along with the camaraderie, even if it is mainly back in the UK at Alice’s Restaurant.  This is what the Trike is imagined for.  A Morris 8 full of dogs, an Austin 7 tooting into a farmyard, one Mercian tricyclist, his soul singing.

You can get anything you want, at Alice’s Restaurant
Excepting Alice