Twice a year we all forget to reset our clocks for summer and winter time, and even when we do, we can’t recall are they to be set forward or back.  But did you know there are still provincial time differences? 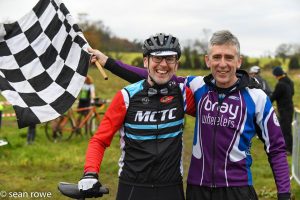 For example, I didn’t know there was Leinster time, specifically Leinster CX time.  Stupid me, here I was in ‘The Pale’, up for my little sister’s wedding, hence the dickie bow, with my watch set to ‘Munster’.  But I was in Wicklow, home of Ireland’s cycling club of the year, Bray wheelers CC (a sprightly 70). Bray were hosting Round 3 of the Leinster League and I had signed up for the B race.  But it was not to ‘B’ sadly, as I hadn’t realised the B race follows the A and I had to be back in Cork by nightfall. My mistake, but it’s a good complaint. 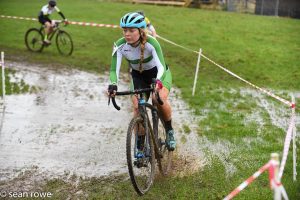 Our sport has become so popular that organisers in Leinster, concerned that the 160 wheels of a B race would cut up the turf so much, have ended up reversing the running (pun, pun) order, as the A race was in danger of having very little to do with bicycles at all. 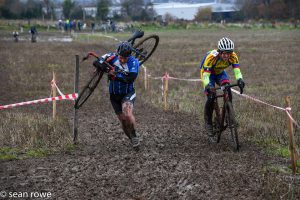 As it was in OldCastle, Co. Meath, I believe, so would it be Lord Meath’s old castle in Kilruddery.  The event ran like clockwork.  I did take the time to have my photo taken by Seán Rowe (or Seán Rowe’s time-travelling twin, how else does Seán show-up everywhere?) and took a lap of Seán O Tuathail’s course.  The parcours was less hilly they had promised, however, as Seán would say, bhí sé fior baisteach roimh an lá, so instead of gradient they had gloop.  Quality gloop – muddy, boggy, sloppy, slippy, sloggy, dippy, damp gloop.  I hadn’t done a time check and there was no chance Seán was going to call a rain check. 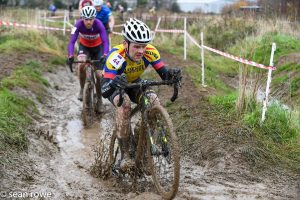 For some cyclocross riders time has no hold, these would be our junior girls and boys.  Bray Wheelers had kiddie races and underage and ladies (all aged 21 of course) races happening in tandem.  I wandered up to the pits to watch the action.  Whereas in Munster the courses so far have had dual entry pits, where you can enter every half lap, here you had only one change per lap, but what a set up.  Located right beside a big pond, I witnessed fathers and mothers dunking the muddied bikes of brothers and sisters, much as they would have loved to do to the riders when, as kids, they weren’t so big. 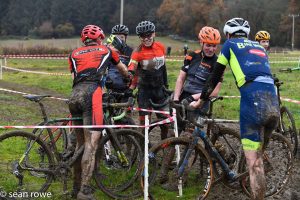 I had, I imagine, wisely left the pits before the men’s races began, I don’t doubt it was pandemonium.  I can just imagine the clogged bottom bracket shells, the derailleurs heavy with field detritus and God help anyone with cantilever brakes.

There was a timeless quality to the flag dash that saw Tim O’Regan pip Niall Davis for the line in the A race (Munster’s Richie Barry arrived on time and 4th after Sean Nolan).  There was plenty of time for ladies winner Lara Gillespie to savour her success ahead of Asia Bula and Stephanie Roche in 2nd and 3rd. 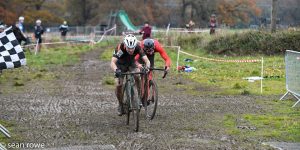 Amongst the OldVelos fraternity old clubmate John Doris showed Mark Murphy some seniority in the M50’s, while Seán O Tuathail and Ray Murphy remained in the 30’s, in their respective races.  In fairness though Seán was all over the podium, giving out the prizes (and Ray was King of OldCastle)! 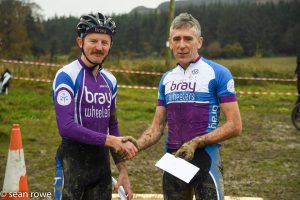 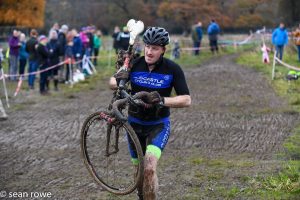 I imagine, had time allowed, this would have been a great race to race, but what I couldn’t imagine was the one poor rider whose handlebars filed for divorce in the fork courts.  Now that’s a story that will last the test of time. 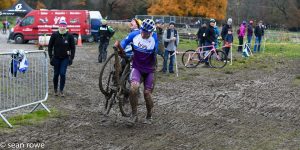