The Fall from Grace -The Burren A Race

I had a sense of impending doom as my rear wheel spun but I stayed put.  My handlebars rose in my grip, ascending further and further into the air.  I had just tried to climb the second of three combined banks, and it should have been manageable as I had hit the first in a low gear.  But that was my mistake.  A bit like preparing a chat-up line at a disco without counting on the possibility she might answer back.  I just hung there, feeling foolish.

‘This is really going to happen’ is a lovely thought when your chat-up line is a success, not so nice when you’re deep breathing, eyes pleading, feet stuck in your best shoes and knowing full well you’re going back to the place you came from, possibly on all fours.  Such errors are best not made on the dancefloor but have been made in front of sympathetic friends on a cyclocross training spin (like, last Saturday).

Oh, when you fall, how time slows!  As I succumbed to gravity and embarrassment I was reminded of the ‘falling helplessly’ dream.  It’s those three seconds from inevitability that terrifies us most.  We usually wake up, relieved. In my case I worried about crushing my fellow riders: ‘underage Dave’, Grace, Ciarán, Míchael, Trevor and Russell otherwise known as the the young, Young and not so young.

Seeing them in action reminded me to return to the write-up of the A & Ladies race of the Burren Cyclocross race and ‘the Fall’. Readers of last weeks ‘Rise’ will know I only attended the underage disco, but nonetheless got to throw shapes at the Rise.   Afterwards I strolled down to the Fall to see how the big boys and girls got on.  Perhaps I’d learn a few moves.

Imagine riding the Rise backwards, downhill that is, well that’s like the last three seconds of the Fall.  The Fall concluded with a turn around a tree, a reminder to ‘Think Twice’ and a drop to safety. A spot where riders could ease their anxiety and return their hearts to their chest’s cavity.  This was the safe spot.  Or was it?  Isn’t this the landing where you’re meant to feel relieved, or are you afraid the nightmare recurs?

There is no landing when you awake sweating from the nightmare of your own making.  The Fall screams ‘wake-up’.  There is ground everywhere, slipping, moving, sliding and inviting.  There are ruts, roots, trees, stumps and spectators.  There is grit, bits of grip, loosening ground and gravity. There is only one exit, but many ways down.

To enter the Fall riders had to negotiate a sharp left turn between some boulders.  This was usually accompanied by a sharp intake of breath.  Riders flung their worries aside as they climbed to the point of no return.  There, they usually found their worries waiting.  In a battle between the forward motion of the bicycle and the brain’s pleas for refusal, the riders’ eyes, tummies and braking hands spontaneously squeezed.  The full-scale terror of the Fall was upon them.  Look down and be silent. Look down and scream. There were many takes on the Fall, many inglorious.  Here are but a few. 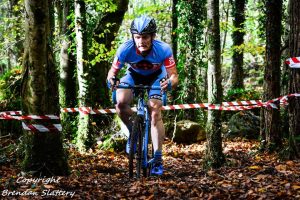 Michael remembered the Fall well from last year.  He fell.  His approach embodied the sense of foreboding.  Here was a man not only braking with his hands, wrists and fingers.  He was braking with his feet, his thighs, his mind.  He got through. 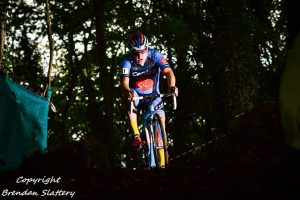 Moralistic to a fault, Russell reckoning if he rode the high ground on low pressure tubulars (he literally swears by them) that he’d at least have somewhere to fall.  He chose the ignominy of slipping on a tree root than being trampled from behind.  He’s a great believer in tubs and soggy cantilevers is Treacy.  He too got through. 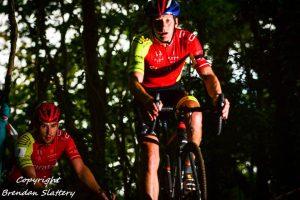 “The DuckWood–Lucey method is a mathematical formulation designed to calculate the target descent for the Strata Revolution team battling second in a limited course interrupted by weather or other circumstances. It is generally accepted to be the most accurate method of settling a score”. In Ennis Trevor ‘duck’ Woods fielded his way to safety, but never alone and was eventually bowled out by Michael Lucey in the final turn over.  Someone should write a song about it.

AJ was minding body over soul. Soul? Really? AJ? Anyway. Usually unretiring, AJ decreed that dismounting is the better part of violently falling off and that footsteps were better than tyre tracks. Dismounting is not to be decried, especially when necessity requires. 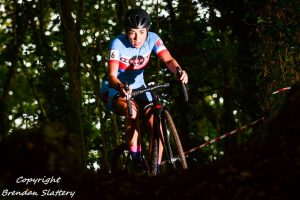 Having mastered the first few attempt the fear eventually caught up with the Young.  Youth can sometimes do that to you. She peeked over the precipice once too often and thought.  Thinking like that can be your downfall on the Fall.  She just exited stage left. “Did I go over the handlebars that time?” Not with grace, Ms. Young, but yes. 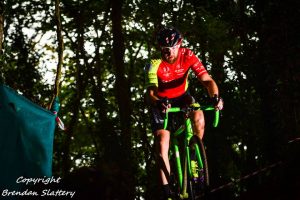 Nothing I saw bettered Matt Slattery.  His eyes were not fixed on what was about to come, he was already thinking about what was to pass.  The lip of the descent was but the start of the finish.  No root had the time to think it could trip him, no scree scared him. Gravity said “after you sir” and the tree before the final drop stepped aside.  Right turn, drop down, disappear (which reminds me to ask what happened Paidí?).

Back to the CX disco

I imagined all that back at CX dance class, where I was silently moving, my body swaying, my head far from the ground, thoughts in faraway places, like Ennis.  Hands waving way above my head, fingers splayed out, touching the sky, light growing into darkness, a shout from behind, a symphony of high pitch screeches, my mind light headed and slowly letting my senses go, my body surfing, back, falling, back. Back into a crowd of thorns.  “Are you okay Brendan?”

The Fall. Extraordinary. How time slows.