Round 3 of the Munster CX League: Getting the Upper hand

Richard: “Where were you?”

Patrick: “At the shops, Centra.  Here’s your mints”

Richard: “I used ride for them remember – St. Finbarrs – Centra?”

Patrick: “Remember?  Like that time you ran into me in that race?”

Richard: “I don’t remember it that way.  Mallow, wasn’t it?”

Richard: “Whatever happened to Paul?”

Patrick:  “Not sure really, last I heard of him he was going to circumnavigate the globe the other way ‘round.”

Richard: “You’d think once was enough.”

Patrick: “What age is he now”? 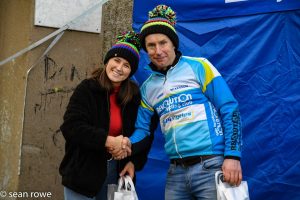 Richard: “By the way, I won that race, fair and square.  But there was some hullabaloo.”

Richard: “Sure hadn’t I caught you by the last lap.”

Patrick: “No, it was me who caught you.” 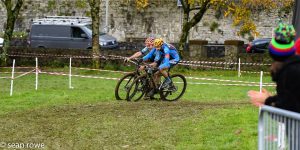 Richard: Doesn’t matter, I won anyway, fair and square, like I say.”

Patrick: “Sure neither of us won that race.”

Richard: “Then who won it?”

Richard: “My namesake, I remember him”.

Patrick: “Yeah, I was on a team with him, remember? Then he signed for Strata – McGregor“ 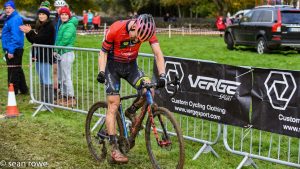 Richard: “Mallow was always a technical course, never enough running for the likes of me.  I was a good runner, remember?”

Patrick: “Remember, do I remember, sure after you fell off you ran up to that line like John Coughlan, or whatever his name was?  Treacy.  That’s it Treacy.  There was another lad Treacy raced back then…”

Richard: “Fell off is it.  Sure you had your hand on my bars all through the corner.”

Patrick: “Now come on, you put your bars where my bars used to be.”

Richard: “Look, you overcooked the corner.  Be fair.  I can remember it clearly, see, I was behind you.”

Patrick: “You were beside me.”

Richard:  “I had the outside line.”

Patrick: “How could you have the outside line when I was the one wrapping myself up in marking tape.” 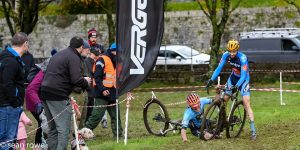 Richard: “Ok, yes, maybe you did, but I can remember it clearly, you slammed on your brakes.”

Patrick: “What was I meant to do?”

Patrick: “For God’s sake, you left me nowhere to go.”

Richard: And then you lost control, see?”

Patrick: “Lost control is it? You had your foot out too.”

Richard:  “And then you grabbed my bars.” 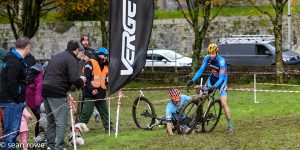 Patrick: “Grabbed? I was falling. I thought I had the seatpost and could pull the bike back up”.

Richard: “And when that didn’t work you stuck your leg into my back wheel.” 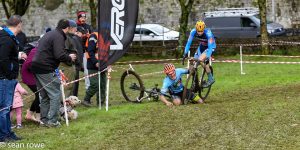 Richard: “Straight over it?  You gave it a kick.”

Richard: “I was airborne!” 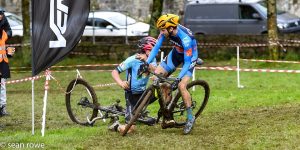 Patrick: “Airborne? I‘m the one with the scars of those 36teeth on my thigh all these years.  I used use them as the guide for where to stop shaving my legs.  Do you remember that, shaving legs?”

Richard: “Yeah, nicking the back of your knee. Pure amateur!”

Patrick: “Or your missus wondering what happened her Imac.”

Richard: “Anyway, you fair wrapped yourself in my bike that day Pa.”

Patrick: I was caught.  It was you who were dragging me.” 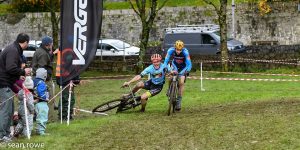 Richard: “Who else won that day, like the women, the other races?”

Patrick: “Lisa Stapelbroek won a lot of the women’s races back then. And yer man Luis Mota in the B-race.  Remember, the lads used call him MotB!  There were some great juniors then, too.” 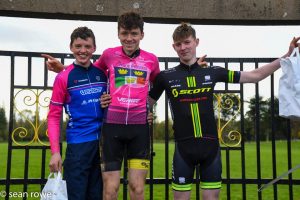 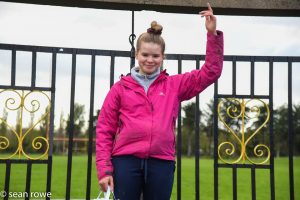 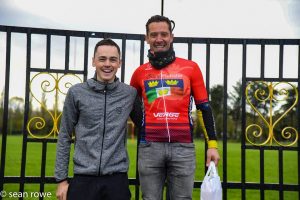 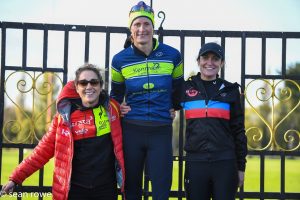 Richard: “Did you keep anything from back then?”

Patrick: “Yeah, I’ve a few jerseys somewhere, a blue one.”

Richard: “Did the winner get a jersey?”

Patrick: “No, it was like a league.  You had the red one, till Maes took it.  Munster CX league they called it.” 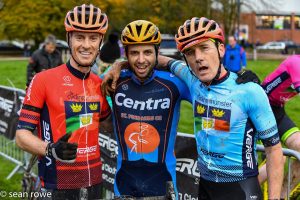 Patrick: “Do you remember, we’d spend all night on the internet looking at photos.  What were we like?” 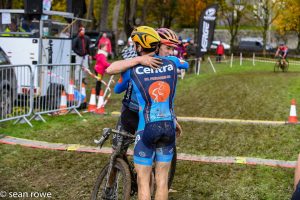