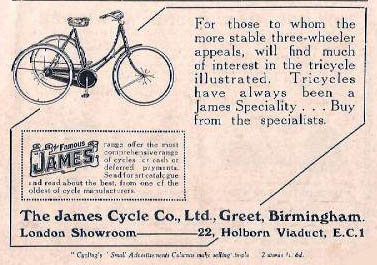 Luckily, the trike did not commit hari-kari on our neighbour’s drive. I suspect its plans were much more sinister and somehow involved me, the person who breathed life into it.

The return journey was surprising swift and uneventful.  When I got back to the laboratory I dissembled the whole rear axle assembly to try to release whatever evil spirit that lay within.  Here was a phalanx of parts new to my eyes. It was not in fact the Frankenstein monster I had imagined but a creation of real beauty.  Exquisite locknuts, interesting cone surfaces, original bearings, ancient hexagonal axles, a voodoo doll…

Preparing for his first outing on a tricycle

My kindly neighbour had offered to machine the axles in order for them to mate better to the slightly longer hubs. I had pondered the issue for some time and thought that, perhaps, this mis-match was the source of the where the evil trickery resided?

In the meantime, I further researched the delights of tricycling and reconnoitered some other tricycling advice.  “Ride with one hand on the handlebars”.  “Ride with your arms crossed”.  “Don’t spend money on refurbishing it as you might hate it”. My dalliance was fast becoming daunting.  I did a search for ‘racing trike’ on YouTube (you can too) and found an American novice giving truth to learning tricycling.  “It’s totally unlike riding and cornering on a regular bicycle. It’s one of the most terrifying things you can do”.  A speech bubble appeared as he careered around the half-full car park. “This is horrible…I hate this”.  I am not faint hearted but I did wonder if I would end up feeling the same way about the new skill I was slowly and painfully acquiring.

I came upon a now lost blog that gave me hope and direction.  Literally.  “If you hope to ride a tricycle successfully you must know it has to be steered in the direction you want it to go”.  Seemed like good advice which could of course applied to lots of my other preoccupations in life!

Despite four decades of two-wheeled balancing this was the piece of advice that stuck.  The reassembly of the trike with the newly machined axles was now started with new found enthusiasm.  It may be a mechanical no-no to refit original bearings, but there was no way I was going to disturb the ancients so I put everything back in place just the way I remembered that I had found them.  The two rear wheels now fitted snugly and the imperial threaded locknuts held fast.  Surprisingly there were no parts left over which was a new experience for me when resembling complex machinery. The rest of the rebuild you can read about should I survive long enough to write the next installment. My intention now is to share with you my joy and bring you tricycling!

Once again, with my two feet planted on the road I pointed the trike where I wanted to go. I felt a little bit of déjà vu but my memory of pain had vanished. Starting gingerly, I decided to try the theory.  I want to go left, I turn the bars left.  I want to turn right, I steer accordingly.  I’ll just keep going straight. Whoooah. I must steer straight also. I see.  I’m getting this.

The recent freeze has ruined the surface of many of the sun-sheltered roads in our locality. The ubiquitous potholes are now so prevalent that  a good piece of road is less common than the usual club-cycle warning shout of ‘hole’.  These potholes seemed to have cleverly aligned themselves with my two back wheels.  How would the trike handle this rubbish surface?  The sensation brought fond memories of my seafaring days and my love affair with another uncompromising vintage craft.

The traditional Irish Currach rides waves deftly, and in still waters silently.  Occasionally conditions are not so forgiving.  A change in wind direction can send waves to your bow while you are pushed from the stern, and always, always, a rogue ‘Whitehorse’ will gallop in from the side and push you askew.  The temptation to react and to pull the oars against it must be resisted.  Trust the ‘ancients’, the craft will find its own level.  The key to triumph over the turbulence?  Don’t overreact.  “You’re the jockey” I reminded myself, “not the horse!”.  The trike trundled on.

“I want to bring you tricycling” this I had said do to my great friend Stefan, who had often been my ‘Currach Captain’.  He had ambled out to East Cork in the first of the Spring sunshine and had called in. “Let’s do a loop of ‘The Ferry’”, I suggested.

My local neighborhood offers a 7-mile scenic round-trip that overlooks the shore on one side and borders deciduous forest on the other. “As long as I don’t have to cycle that thing” he replied, pointing scathingly at my new pride and joy. Within a mile and a half we were on the flat, quiet section of road I had originally intended to you use as my straight-line training route. I jumped off and offered Stef the trike.  “You must be joking?”. But he got up on it anyway, his toes struggling to flip over the vintage toe-clipped pedals.  He looked unsure, ungainly, uncomfortable, petrified.  The wheels turned.  He rode straight… into the ditch. “Give me my bike back” he insisted.  We rode on, taking in the views of Cork harbour and accepting the take-two looks of walkers as our five wheels passed them by.

The ‘Ferry loop’ can be short circuited by taking a sharp switchback over a dividing ridge.  Stef and I raced each other up the climb, stopping by the ancient Fairyfort of “Gurranakeneficke” graveyard.  Once again, a long flat quiet straight road lay ahead of us.  “Go on, try again, but steer it where you want it to go this time”.

Fair play!  Stef seemed to have mastered this basic tenet of tricycling. I watched him totter off in a straight line. 100 yards, 200 yards, 300 yards.  “By gum, I better catch him up”.  I took one look back at the encircled cemetery and noted how the ancients chose a site at a height where nothing could pass them by unnoticed.  I jumped  on Stef’s bike with the intention of taking off in hot pursuit, of course, ignoring the fact that his mount had a deficiency of one third in the wheel department compared to what I was used to of late .  My subconscious thought I was still grappling with three wheels and I careered straight into the ditch.    Mortified again!  More pain! More injuries! Four decades of acquired skills had vanished. The body was willing, but the mind had become weak…..