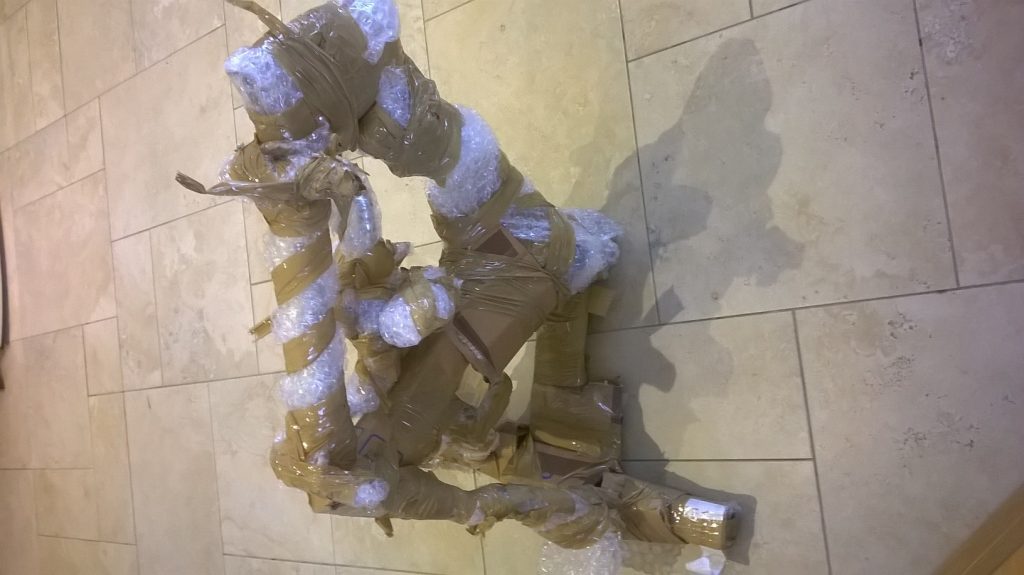 Little did I know how close I was to serious injury when this innocent looking parcel arrived.

“Find a quiet road, preferably flat and straight, with no traffic.  Cycle on it for 300 miles.  As your excursions into the ditch become less frequent try turning”.  Now, that’s either an instruction to an over-amorous couple on a long-distance cycle or the advice you’d give to a new recruit to the joys of tricycling. 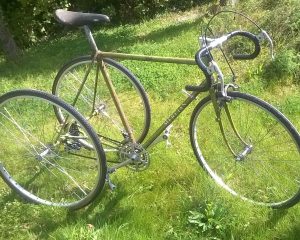 The Beast at rest out grazing in a field

In fact, that was exactly the advice I received from the very supportive 3 wheeled community I had seemingly joined and I had no reason to doubt them.  It was a skill I really wanted to master and I thought it could prove really useful when cycling home from the local hostelry.  But could cycling a trike really be so difficult?

Showing no regard for logic and ignoring the advice I had received I managed to delude myself into thinking that the road outside my house had sufficient of the necessary attributes to make it suitable for my recently acquired Mercian vintage racing trike’s maiden voyage.

Fuelled by an overwhelming desire to show the trike to a mechanically minded name sake of mine, who lives just 100 yards down the road, I threw caution to the wind.  I planted the trike on the tarmac, calmed it, then myself, and mounted carefully.  All good so far. Everything was just as I expected and according to the detailed instructions I had received from my triking comrades.  With new found confidence I flipped my feet into the ’rattrap’ pedals and released the brakes.  The trike decided to roll backwards so I applied some forward pressure.  So far so good, nothing that I wasn’t expecting but none the less a cold sweat started to tickle my neck.  The first few yards were easy just a little wheel spin as you would expect on loose gravel.  My pace increased directly in proportion to my confidence.  ‘Hey look at me, master of my own destiny!’.  I steadied myself as I passed a lane sloping away to my left.  Gravity, maybe camber or some stronger mysterious force pulled the trike the way of the lane.  I counter balanced. The bars jack-knifed.  Mild panic, I appeared to be out of control. I braked hard.

Planting my feet on the ground I lifted the trike and pointed it in the direction I desired.  I kept in mind what I had learned so far and after a quick word with St Christopher (and a nod to the ancients) I took off again.  The roadside ditch to my left gave me the security of knowing what ever happened next may lead to injuries to the trike but at least I’d have a soft landing.  Progress at last, the yards (or metres in new money) flew by.  Success!!  A manic grin covered my face when I remembered the old adage ‘the journey to Rome starts with the first step’. I had had crossed my Rubicon, I was a tricyclist. I thought.

Proceeding by my next-door neighbours new wide, smooth, sloping, tarmac covered driveway soon put paid to my elation.  The boundary were walls of increasing height leading to a pair of heavy wooden gates capable of inflicting severe injuries to those who approached them at speed without going to the trouble of opening them.   The trike seized control and grabbed the opportunity to swing me helplessly downhill.  From my vantage point the gates grew larger as did my momentum.  Brakes clenched, shoulders dropped, feet released, brake shoes and shoe leather combined to drag me to halt.  Not only was I confused, I was mortified. 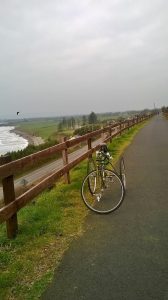 The Beast considering a change of direction

Once again, I repeated the only exercise I knew to change the direction of my new nemesis. I hoisted the frame into what I now assumed was the start position and approached the Hennessy’s house with an air of nonchalance in the hope no one had noticed my state of complete terror.  Gerry lives on the other side of the road and the incline to his home offered my first chance to try the trike against gravity.  Surely that would be easier.  Naturally I shifted my weight back as I approached the climb.  Swerving awkwardly, I aimed the front wheel toward the incline and pushed down on the pedals.  The trike buckled, swung around in a tight arc that no brake pulling could halt.  I now faced the direction from whence I came.  Terrorised, all I could do was plant the trike in a large bush beside the gatepost.  My knuckles tingled in pain from the impact of the branches.  I calmed myself and decided to dismount.  The trike had second thoughts, giving one last shudder before coming truly to a halt.  I couldn’t get off quickly enough, and feeling defeated pushed the bike up to Gerry’s door.

Thankfully Gerry hadn’t witnessed my arrival and instead admired the trike and it’s mechanical engineering.  “How does the transmission work?” “Brakes only on the front, of course, no discs back then”. “Ingenious frame design considering the stresses”.  Gerry, a master mechanic and motorcyclist took it all in swiftly. He then offered me tea.  I was glad of it as there was no valium on offer.  With a feeling of dejection I sat nursing my knuckles while overlooking the torturous 100 yards from where I came.

We moved on to other matters, politics and all that. Out of the blue, Gerry sat bolt upright and shouted “Jesus Brendan.  The trike!”.  We watched in deafening silence as it soloed past the kitchen window and picked up speed as it made its way back down the driveway heading towards its recently acquired new home.  We both knew if it made the road only providence would prevent an ugly and unexpected smash.  It turned towards the entrance.  I gasped, knowing if only I was on it I would mercifully be the only one to die.