My lovely course – Cyclocross at the Clonmel Horse Track

As usual, the committee expected Ned and Douglas to run the Clonmel CC Cyclocross race again.  “Who, us?” said Ned, “oh, I’m not sure…did people like it last year?”. This wasn’t a question.  It was a juicy worm dangling on the end of 2 miles of marker tape. 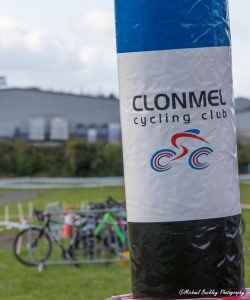 “Like it?  They loved it”.  The Chairman of Clonmel Cycling Club knew well how to nibble.  “Isn’t that right Brennan?”.  Brennan only toyed with them,  left them dangling “so some said,  chairman, some said  ‘best course yet'”.  Now the Treasurer pulled the line. “Lads, we made enough from the entries last year to buy even better marker tape for 2019”. The lads took the bait.  “Well, if you say so…or does anyone else want to do it”.  A collection of necks spontaneously shook their owners’ heads as lungs echoed the word ”no”.  “That settles it” said the Chairman, “Treasurer buy more tape”. “And pigtails, right chairman?”, added Ned. 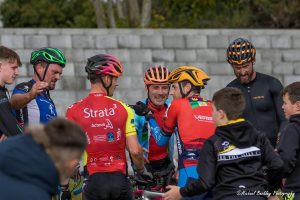 Ned and Douglas agreed to walk the course. “Any ideas Ned?” “Loads.  How would you feel about running it anticlockwise?” “Would it still have the straight?” “Hell yes, we might have another sprint finish. The fans love that, even if it is for tenth place”.  “Let’s get them into the woods quicker this time, can we make it single file?”.   “We can if Treasurer lets us buy a slash hook.  Now, that gives me an idea.” 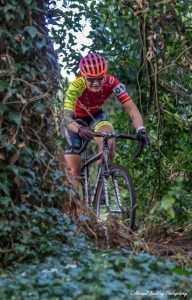 Soon after, armed with a bundle of tape, red arrows, a slasher and a shovel (and receipts) Ned and Douglas cut their way through the undergrowth at Clonmel race track.  “They won’t think it’s a racetrack we’re making now Ned, this looks like a hunt”.  “Douglas”, says Ted, “you’ve spilt so much of your blood here the Clonmel Harriers will need to retrain their hounds.”  Ned pauses, thinks hard and shouts.  “Hounds. Hounds! That’s it Douglas. You’re a genius. Grab that shovel”. “Hounds Ned?”. “That’s right Douglas. Mounds! Let’s make some mounds”. 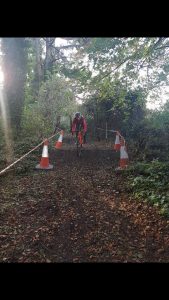 Ned and Douglas laboured shovel upon shovel of earth to create their own geographic feature.  Such was their diligence they made two permanent features, now known locally as, you guessed it ‘Ned and Douglas’.  The mounds were so big the boys could have been buried beneath them and no one would have been any the wiser.  “Let’s get some air Douglas” says Ned wiping the sweat from his furrow, “I’ve enough of these woods”. 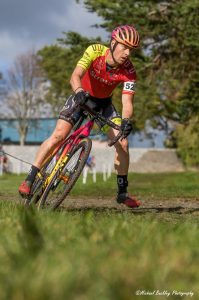 Emerging out on the race track, Douglas looked forlorn, sorrowful, lost, like he was missing something.  “I miss the woods Ned, could we not bring a tree with us”.  “Really Douglas, a tree?” “Just some small ones, pleeeaaassse”.  “Oh alright, but you’ve got to carry them.  Douglas scampers back into the woods and returns dragging two tree trunks. “They’re kind of heavy Ned”. “Well you wanted them”. “I don’t want them anymore Ned”  “Well just drop them there, they’ll do as boards. I forgot to ask the Chairman if we could buy boards.” 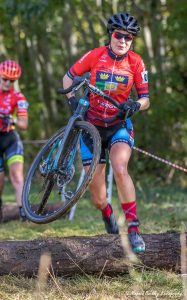 But Ned had not skimped on the marking tape.  Straights, switchbacks, along walls, over grass over tarmac back over grass, miles and miles of marking tape.  When Douglas got moody, Ned threw in a little bit more forestry, but soon distracted him with the lure of the finishing straight.  It was of course this straight that saw Richie Maes fight it out with Páidí O’Brien, Matt Slattery and a punctured tubular for victory last year.  This year was no different.  The A race was won by Maes, 30 seconds ahead of O’Brien, but time it was league leader Richard Barry a further 30 seconds adrift. 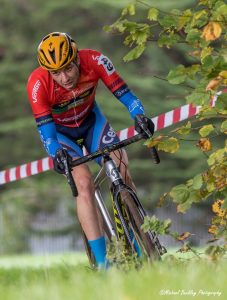 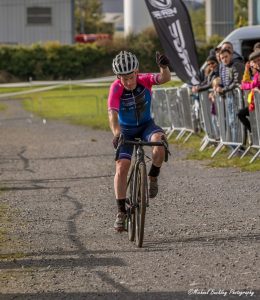 Great news was that the women’s race had enough participants to run the race in its own hour and not as a subset of either the men’s A or B race.  Reports are of an exciting race, won by Lisa Stapelbrook by 40 seconds from Lucy O’Donnell, followed 2 minutes and 20 seconds later by Nessa Rochford who won the sprint from Márcia Salvador and Aggie Wozniak.  Douglas will remember that sprint! 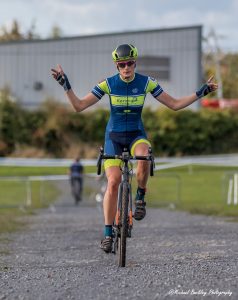 If the A and Ladies races heralded new winners The B-race was won a second time by Luis Mota by a very healthy margin from Jamie Blanchfield and Daniel Lynch, who were both two minutes adrift.  The same time difference divided Patrick O’Loughlin and Ayoung O’Brien, second and third,  from Under-16 winner Luke Murphy. 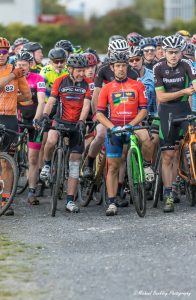 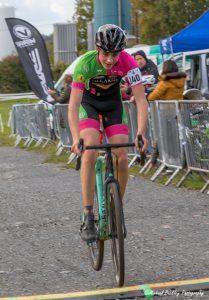 What about Clonmel Cycling Club after this magnificent day’s elite, ladies, underage and kids racing.  Well it was no laughing matter.  Poor Ned had to comfort Douglas, who saw his lovely work torn to shreds by thousands upon thousands of dimpled cyclocross tyres.  But the Chairman comforted them with the news that the receipts were good and next year, maybe next year, they might even have a water feature for their lovely course.  “Yeah” said the club treasurer “if it rains!”. 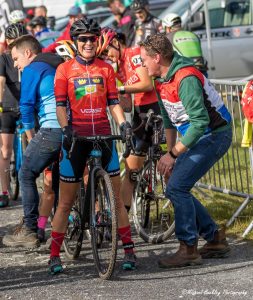