Running up that Hill

“Steine Wachsen”.  My German neighbour often reminds me that stones grow when the garden needs to be dug.  No matter how much you sift, fork, banish there they are coming up once again, taking the space where some carefully nurtured seed potatoes should be.  And so it will be, and so it will remain, at the top of the cyclocross B race game.  They come, they conquer, they ascend to the ‘A’’s and they come, they conquer, they ascend to the ‘A’’s yet again.   If you can’t see it in the soil, see it in the face of a second fourth place for Craig Moynihan, Killarney CC, head in mitted hands, tongue in cheek, laments “beaten into 4th place by a, ah, a… skate boarder”.

Rory McCarthy (MBCC), wearing baggy shorts and a give-away cycling jersey appeared behind me close to the finishing line giving credence to my ‘might I be last?’ pain.  He saluted a chirpy “great day” as he came my way, but not at leisure but alas to lap, for third place.  No one knew Rory, but I had met him and his vintage Colnago before.  Savouring that for better days he had decided to give CX a go, a bit easier than his lung puncturing experience in a boulder strewn Enduro race it seems.  Not that he minded puncturing a few committed B racer dreams.  And if that was for third, what about second and first?

Shane Fuller (a pillar of strength like the Giants causeway) rode a borrowed Bianchi.  I saw him on the line. I saw him at the end. I did not see him in between.  And first, Neil Hodges, Kanturk boy. Stony fertile soil in Kanturk it seems.  But fear not B racers, they too will be banished now to join O’Connor, O’Sullivan and O’Loughlin in the grAve race.  Don’t be down hearted friends, nor down-trodden, or miffed.  They won’t find us down in the dumps.   Well hold on a second, isn’t that exactly where they found us?

The road sign from the dual carriageway said ‘recycling amenity’ and that’s exactly what it was.  But once a dump always a civic amenity.  Today was the day for Re Cycling at the De Ronde Cross event.  Who knew that the fantastic Tramore Valley Park had such space?  Indeed, no one had imagined such a long CX lap was possible. A question in most minds was just how many ‘re’s’ we’d be doing.  Results show the Best of the B’s returned 5 times.  Six for A’s.  But reveal just four for the ladies.  Is that worth review? 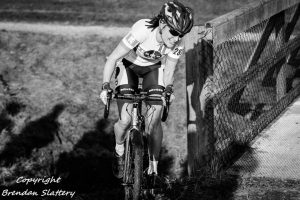 Coming back from social commentary to CX competition.  Personally I thought I was in a league of my own.  I hung back from the start in an effort to avoid popping any more ribs.  I was determined to only come down in collisions of my own making.  Seemingly there was a right melee at the start of our race, but no sign by my entry into the early grass chicanes, gravel embankments and playing fields.   Other than being manhandled by a thistle I came away blemish free, but this was still early doors.  Down around the pits were the beginnings of a crowd, well-wishers, even if I was well back.  The noise increased as we came around the back of the BMX track, enthusiastic encouragement filled our ears, loud voices cried, cajoling ‘Do a 180 degree nose pivot!’ Do what?   The view over the steep BMX banks showed there’s great enthusiasm in Irish cycling.  It just isn’t all for us.  And much as we enjoyed the lovely rolls of the baby BMX humps, there’s probably a latin name for that, the fabulous BMX park excites the imagination for next year’s race.

There is a latin name for my present predicament. Costa contritum.  And around the BMX track it was costa contritum continuum as we dropped down five foot and I concertinaed and squealed.  No time to stick around and complain though as the sympathetic crowds were elsewhere.  I’ll tell you exactly where. Over by ‘out-of-bounds’ bridge and the deep trough of doom.  De Ronde loved this, the crowd loved this and so did we.  If the front wheel struck the grassy foot-tall verge with any traction, and ditto adrenalin, you’d be halfway down doomsville before you knew it.  The issue was getting out.  And something was nagging me.  Not just the pain. Not just Pat McHugh ahead, or Michael Casey behind.  No, it was definitely what was coming.  And I cried out to course engineer Tom Mulqueen: 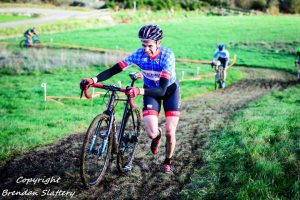 But just like Kate Bush Tom had problems too.  Wishing you well now Tom. But not yesterday Tom, oh no.  You can blame Mícheál Corkery all you like, but whoever thought that the trough and doom and hill of death combo was a good idea.  Well I have two words for them.  Pyscho cross.

I died on that hill.  Only four times mind, because luckily I was lapped.  From the top we were brought back down a few S bends, with just enough breath to clip out for the planks.  In our club, MCTC, the Vee is a monument.  But for the De Ronde folks the top of their V only marked last year’s high point as they happily showed off their boards’ UCI compliant 17 CX 400 registration.  I had the knowing feeling the guy with the camera needn’t waste his battery on me.

There are, it seems, two trees and one bush (other than Kate, of course) in Tramore Valley. De Ronde used them shortly after the pits masterfully so that if you didn’t hit one the other would whip you in the face.  But the kind refrain from volunteer marshals “Around to the right, up the hill, go on, GO ON” forgave all.  Thanks each time lads.  We nearly have the lap done and it’s the last one.  Just one more drop, ouch, up to the boggy grasslands, over the road, around the corner, McHugh is gone and McCarthy is skating to third.  But what’s this Michael the kindly Casey, who checked in with me at Fotas fall, is starting to sprint, proving every race has a race.  No time to change gear, in fact in the rush out I even forgot my club gear, but OldVelo I may be, and on my chest you see an image of a sprint king that inspired me. 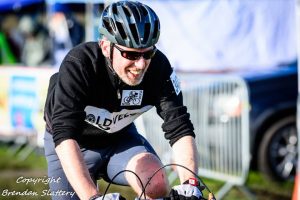 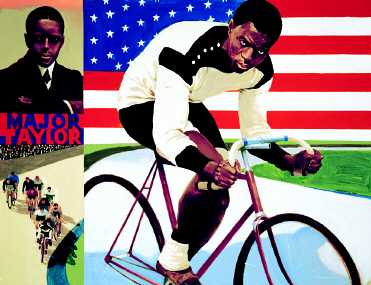 Read about him here and sing: