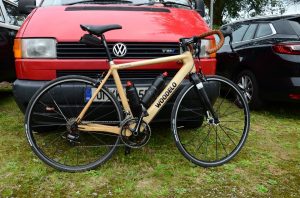 After 75 long, hilly and challenging miles of the West Cork Peak Challenge, I rocked up to the final service stop in Kealkil on my wooden bike and equally wooden legs.  The stop was nestled between a public house and a funeral home.  Water stop or dead stop? I wasn’t quite sure.  As my new-found cycling companions from Bandon Cycling Club gathered around me, beseeching me to make a decision, a Chris de Burgh melody echoed in my head:

“There’s a Bandon train that runs between

And at the bottom of the hill when Ivan blows

Long before I knew I was going to climb aboard the Bandon CC train, it had shone out in the morning haze at Dunmanway rugby club station.  A red and black twelve wheeled engine with Ivan McCutcheon as driver.  While Ivan tapped the gauges and PJ, Alan, Don & Liam talked up a head of steam it was left to the man with the dirtiest job, club stoker Declan Fitzgerald, to organize the obligatory ‘before’ photo.  Without knowing it I had bought a one-way journey on the BCC train simply by taking his camera and telling them to smile. 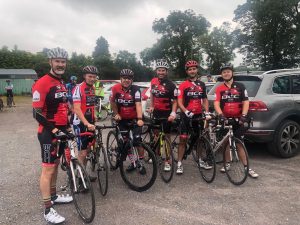 Dunmanway was a busy station, with the ticket desk taking bookings all morning long and station master Philip Kelleher giving the riders a bells and whistles briefing and reminding them not to blow their stacks before the end of the line. Eventually he climbed aboard his own loco and warned us not to exceed the speed limits in the restricted residential zone.  Once outside Dunmanway the flag was dropped and so was half the bunch and I found myself on the wrong side of the tracks, the one that would be siding off for the 55 mile ride.  I should have known that these relaxed passengers were on a pleasure trip, thanked them for their company, and, like a hassled commuter, I traveled from carriage to carriage looking for a seat in the 90 mile group. 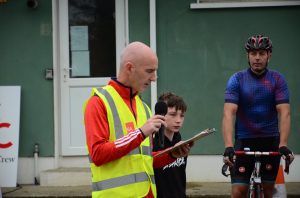 Fortunately I met a fellow passenger who arrived in Dunmanway on the Killarney train, and who, like me, had only bought a one day pass rather than profiting from an all year ticket of cycle training.  Passenger Ken O’Sullivan and I could see the stoker’s wagon in the distance and knowing there was only one chance to catch the expressway coupled our engines together and set off in hot pursuit.  We were safely reunited with the black and red carriages of the Bandon train, but the locomotive was far off in the distance, already chugging up the Cousane Gap. 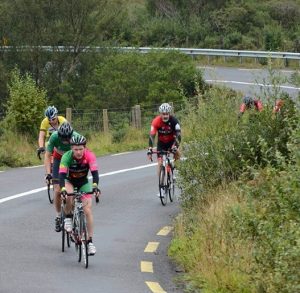 It was at the top of the Cousane Gap that I learnt something about the Bandon service.  The locomotive slowed to a stop, but not hissing, instead waving pleasantly.  This train left no man abandoned and while I and some passengers jumped aboard other services, it was not long before the red and black were making tracks and we hitched our carriages once again to the West Cork express.  “Full steam ahead for Coomhola Bridge”. (Had I known then what I was soon to find out about the Priests Leap I might have opted for Talahatchie Bridge). 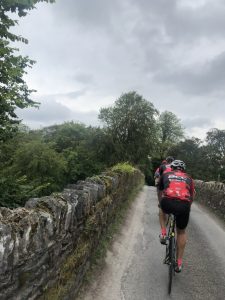 Trains prefer tunnels.  Sure they’re dark, often damp, containing unseen hazards and maybe demons, but they’re hell of a lot better than mountains.  Why oh why did that priest have to leap when, with the help of God, he could have tunneled?  The gradient became too steep even for the locomotive and soon carriages, sidecars, passengers, even the dining trolley, were pushing and heaving, toiling and laboring up Munster’s highest pass.  The engine cried out for water; the stoker for a gel; the passengers for traction and me … “agh, agh agh, help I’m falling”.  What’s worse than leaves on the track? Sheepshit on tarmac.  My back wheel spun out and without time to pull the emergency chord I had hit the ground, sideways.  Ivan took to the intercom “you’ll have to walk now”.  “No way” I said “I paid the full fare”, and finding a grassy knoll climbed aboard and made it to the summit. 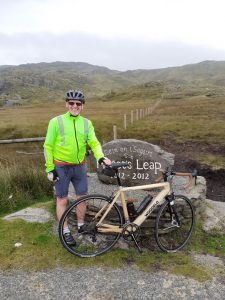 Taking pity on their passengers, organizers West Cork Cycling Club, put on a free of charge trolley service at the top of the climb while I put on a rain jacket.  It was going to be a cold, gravelly descent.  When I took to the front of a group to make my own way down I was thankful for last years CX season but  could understand why the sheep had shit themselves.  The clickety clacks were coming from every angle, but mostly from my teeth.  At the base, once again, the Bandon service undertook its headcount and despite feeling a bit sheepish, counted myself among them. 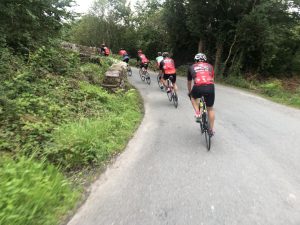 Soon we were on to the Kenmare road to Kilgarvan and suitable noises were made about where forth the good road surfaces.  It was then on to Morley’s Bridge, where 20 years ago I had attended the unveiling of the plaque to Mick Lehane, Spanish Civil War hero.  The bridge marks also the opening salvo in An Poc ar Buile, a more appropriate reflection on today’s madness:

To Morley’s Bridge on my way to labour

With pike in fist, sharing work with neighbour

What – through the mist – should I see await me

On a mountain ridge, but a puck gone crazy!

Had that Poc caught me this day, and it so could easily have, there’s a very good chance there would have been a goat pedalling my bike to the Top of Coom while I went grazing.  I was starving and/or hallucinating, but helpful, very helpful, signs read that I would soon be arriving at the foodstop at Ireland’s contentiously highest pub.  And this day I got what I wanted, soggy salad sandwiches, which I slurped down like oysters and let the stewards brim my coffee cup over. 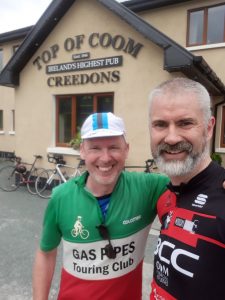 As the kettle whistled for the next bunch of riders so did the Bandon locomotive.  If I wanted to keep my place on the train I needed to rejoin the service.  To forfeit tea-brack is unforgivable, but to miss that train was unfathomable.  I dashed across the platform, scooped up my machine and hung on to the bars as the train descended at top speed.  Our eagle eyed driver spotted the signal and we dashed right along narrow gauge roads. An unintended hand had decoupled PJ and I so we had a mad chase across Paris-Roubaix type twists and turns, the locomotive in sight, but our engines failing. 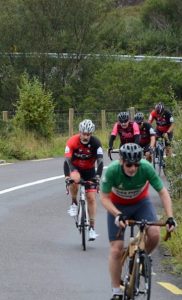 That chase did for me and in my head I waved bye bye to the red and black, wishing not to be responsible for further delays to its timetabled arrival at Dunmanway.   We had reached a point where I could count down the final 15 miles to go (not realizing in fact it was 30).  I thought of Tour de France heroes who broke free of the peleton and clicked into time trial mode to keep them safe from attacks.  Behind the group I click-clacked a mental handcar and kept a tired eye on the right track, sure I’d make it back (before dark).  My tired eyes turned to the river beside me, not even realizing it was the Lee, my eyes looked to the heavens and cursed that leaping Priest, my eyes, narrowed to slits, spied red and black.  The train had… THE TRAIN HAD WAITED. 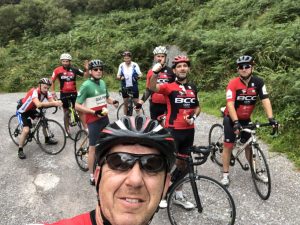 Ballingeary, Céim an Fhia, Kealkil, the water-stop, the under-takers, back up the Cousane Gap, past the first sign for Dunmanway, “ah please”, past the second sign for Dunmanway, “ah dear God”, past any amount of roads to Dunmanway “ah are we sure about this” and finally following all those additional miles Ivan shouts “Altogether YES” and I said “Lord, oh Lord, you let him win. The sun is down and the night is riding in. That train is dead on time, many souls are on the line.  Oh Lord, PLEASE let this be over”

Up Céim an Fhia and down again they spin

And “no one gets left alone” they whisper still.