It is probably  no surprise to anyone that was at the Concours d’Elegance at the OldVelos Vintage Classic in Waterford  that Augusts ‘Bike of the Month’ is Fintan Foley’s exemplary Holdsworth Super Mistral. The attention to detail relay shows and a despite the few setbacks the result was definitely worthwhile.

Items marked * original equipment, all other items are period correct either refurbed or new.

Bought New in Hardings,South Terrace, Cork. September 1970 for £96. I had been racing for some years having ridden the Rás for Kerry 1969 and I started College in Cork 1970. I convinced my Dad that a new bike was needed for my birthday and once I sold my old secondhand Mercian he agreed to cover the balance. I had a budget of £100 and went to Hardings shopping. Old George Harding RIP. measured me up and ordered my Holdsworth Frame. I opted for the Super Mistral instead of the Professional because it had more chrome (Bling!! the Pro only had an all paint finish!)

George went to a trade show in the U.K. where he picked up my frame and brought it back to Cork on an “Aer Lingus” flight in the cabin in the seat beside him. He stepped off the plane with the frame over his shoulders (Happy Days!)  I went in at night when the shop was closed and we picked out the parts we wanted from the stores. I put as much Campag. stuff as I could but in order to stay within budget cutbacks were required, hence Mafac Centre-Pull Brakes; GB Bars & Stem, Milremo Pedals and GB Toe Clips. George built up the wheels (he was a Master Wheelbuilder) and the bike was a dream come true.

It didn’t stay new for long! It was a week old when I was out for a training spin and I was nearly home (the Lough Road) when crossing the Top of Barrack St. I found myself on the Bonnet of a car. I remember the street lights and the street being above me as I tried to figure out what happened. My luck was in (one of the nine lives) The car was a VW Beetle and with the sloped front the bumper hit the Chainrings under my leg (I was at the top of my pedal stroke). The second bit of luck was that I had a brand new pair of cycling shoes which I was riding in to mark the leather soles before nailing on the cleats and so I was thrown clear from the bike. Nothing broken in me but the bike needed surgery. Down to George and we stripped the Bike, he fitted a New chrome Front Fork (which we robbed from a frame hanging up) and re-aligned the frame, new chainraings and a few bits and I was back in business.

I joined St.Finbarr’s and did a good bit of racing which earned me selection to ride for Cork in the Raleigh Dunlop Tour of Ireland 1971. I was selected to ride for Munster in 1972. I continued to enjoy racing my Holdsworth in events up and down the country,  Wicklow 3 Day, Dublin to Gorey & back, Tour of Limerick 3 Day and many Crits and one day races. Having moved back to Kerry where I started teaching I got launched over the handlebars at speed on a training spin 1974, and as I was strapped in my left knee took a terrible battering which resulted in surgery which ended my racing days. However, with the arrival of Micro Surgery some ten years later my knee got sorted and the Holdsworth was pulled out again in the 80’s. I was riding the Caherdavin Grand Prix in Limerick and as we headed out on the last lap I noticed the bike wandering a bit. When I looked down to check things I noticed a crack in the downtube at the gear levers and a matching crack on the top bar, luckily it did not break in two but I had to get off quickly. I bought a Motobekane Frame and changed the gear over. I sent my Holdsworth to Raparee Cycles to replace the two tubes, Dessie Maye phoned me to say he could not get Holdsworth Decals but would I like it as a Mercian? As the chrome was a bit rusty we settled for a full paint job and my Holdsworth came back a light blue and white Mercian (nice paint job though). While he was at the frame we agreed to fit braze on’s for the levers and cables. I raced the bike throughout the 80’s but I moved on to other bikes and other things. The Holdsworth/Mercian was consigned to the attic and despite the temptation to sell it several times it remained in the attic until I went to see the ‘VeloExpo’ at the  OldVelos event in Killarney 2015 and the flame was lit to restore the Holdsworth.

I pulled it down from the attic and stripped it down ready for restoration. Being a pure magpie I was amazed at how many of the original bits were thrown in boxes around the garage. With the help of a friend in England I got the chroming done in Sheffield but the first re-paint was a disaster. The frame then went to Argos in Bristol who did a super re-paint except the Kingfisher Blue was Green so back again for the 3rd repaint which was a work of Art and nicer than the day it left the shop. I saved as many of the original parts as possible but bought New replacement parts or refurbished period correct bits where I had to. I restored all the aluminium parts removing all the original casting marks first and then removed the anodising before Bright polishing to a mirror finish. This was a slow and dirty process but well worth the effort in the end. The Campag. Gear levers got special attention, by removing the casting marks and with my piercing saw I straightened the lines between each of the beads around the edges and then Bright Polished them. The Super Record Hubs got similar treatment Polishing out all the casting marks in the slots and then bright polishing the hubs. I cleaned up some wear and slight pitting and fitted new bearing and they run as smooth as butter (they don’t make them like that anymore!). I got new spokes and bright polished a pair of very rare original Fiamme Oval Red Label Tubular rims, and my very good friend Anthony O’Halloran (O’Halloran Cycles) did a great rebuild of the wheels. A couple of late nights and The Holdsworth was back together and looking a dream. Off to Kilmacthomas to OldVelos and the first ride on my Super Mistral for over 30 years.

Although I struggled on the hills (gears too high) nothing fell off, nor did I, and I had a smile on my face all day. Can’t wait for the next spin!! 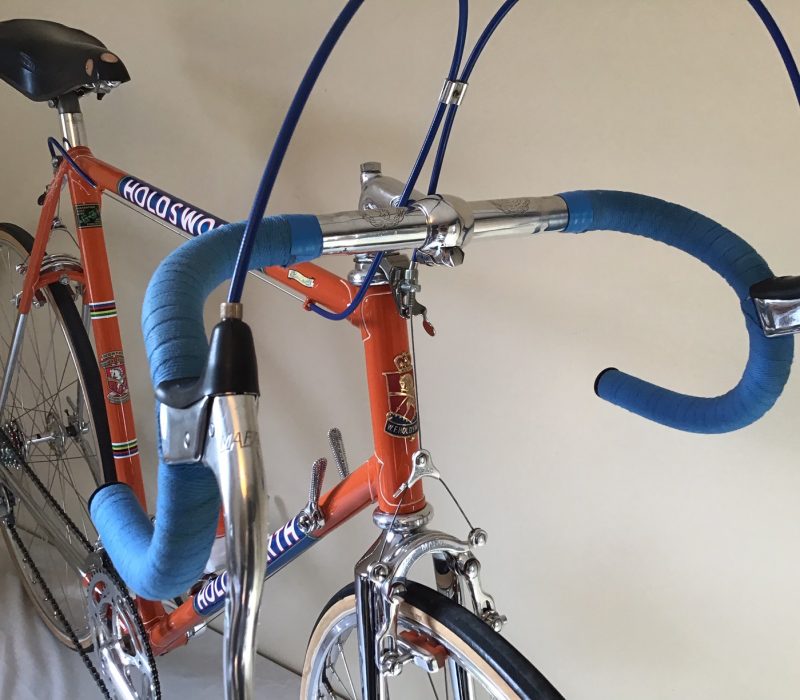 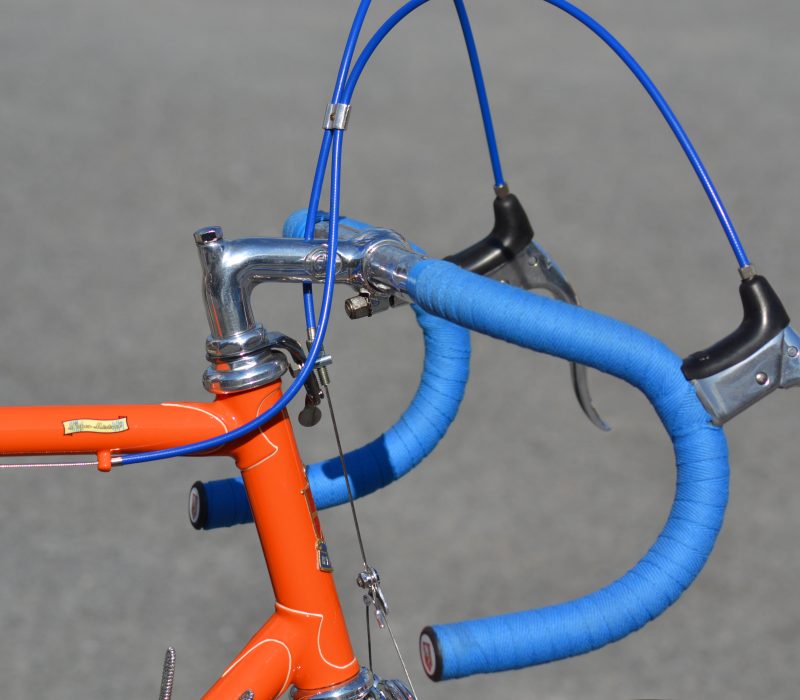 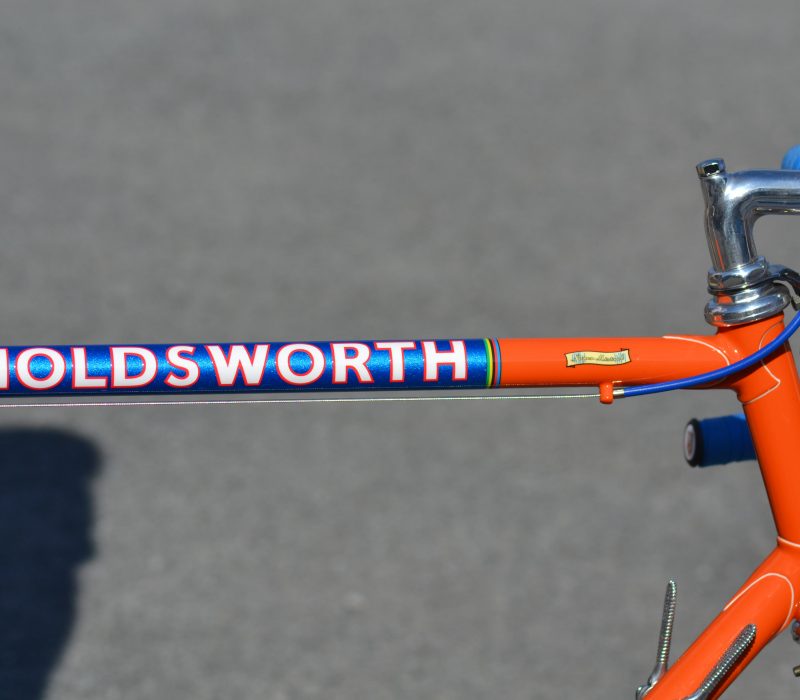 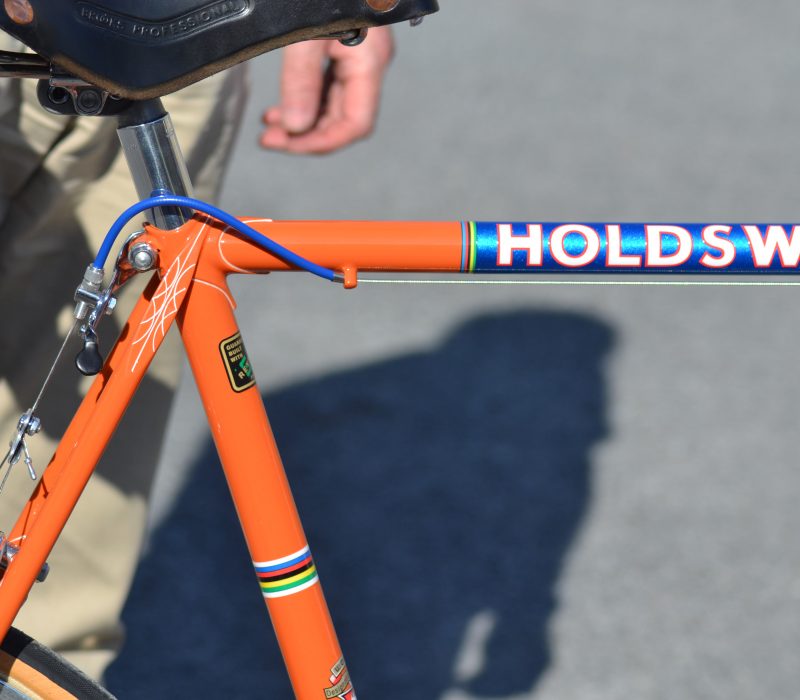 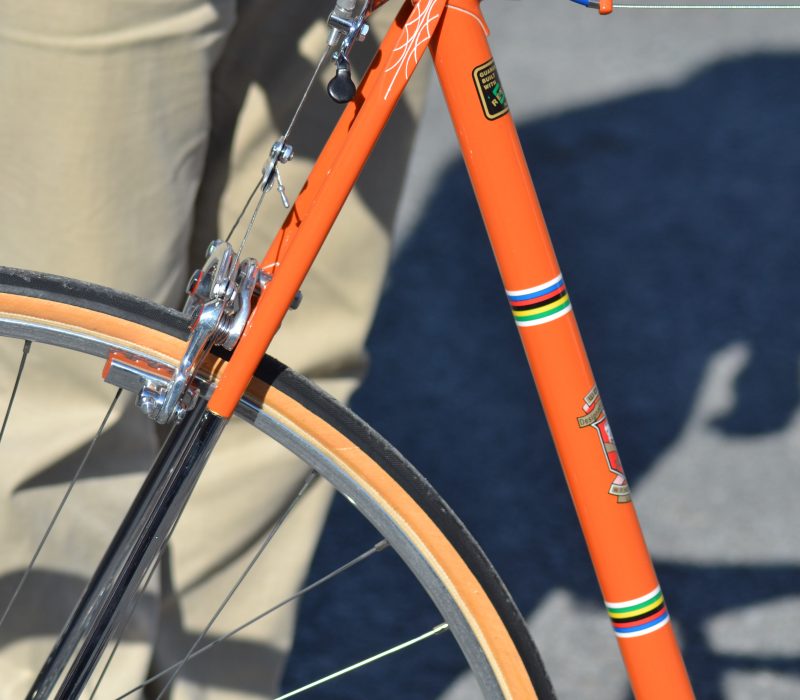 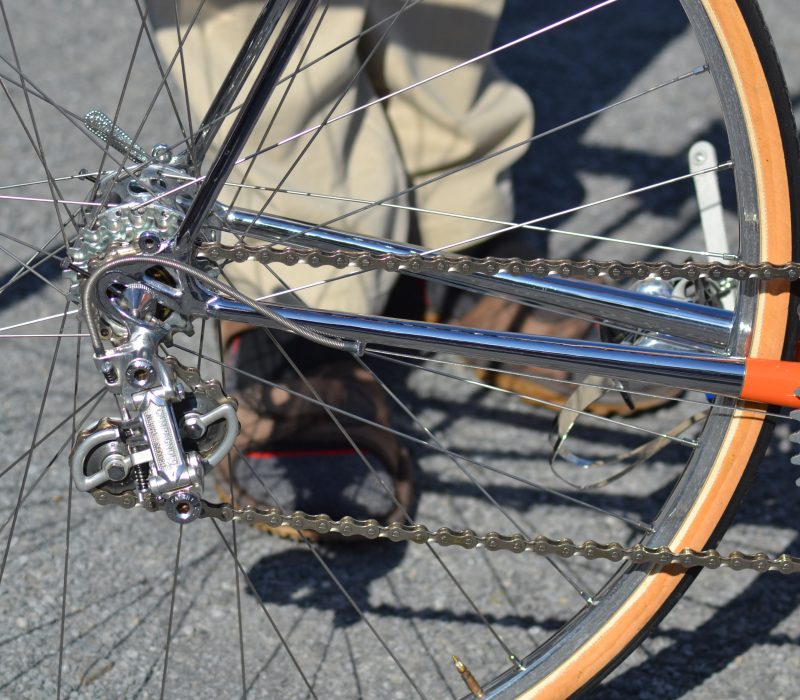 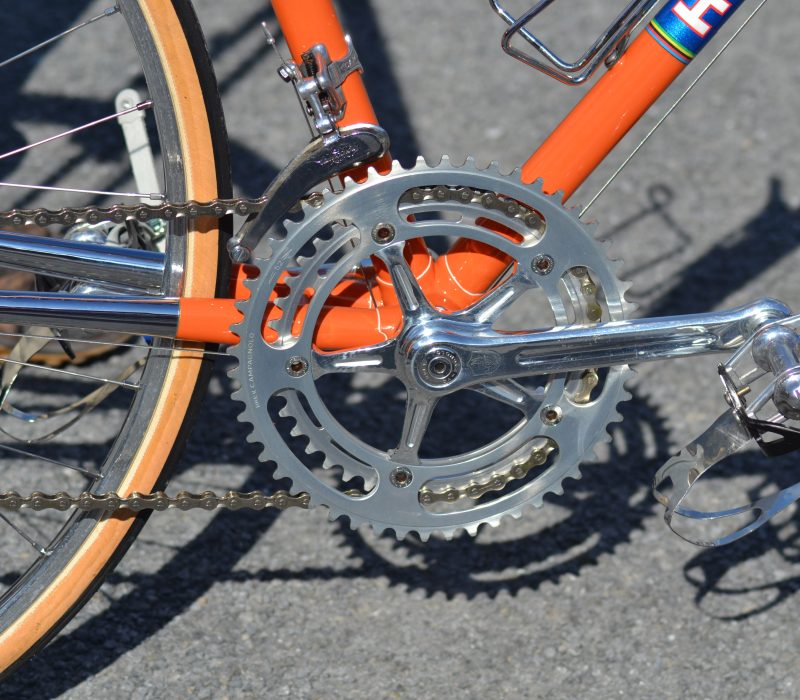 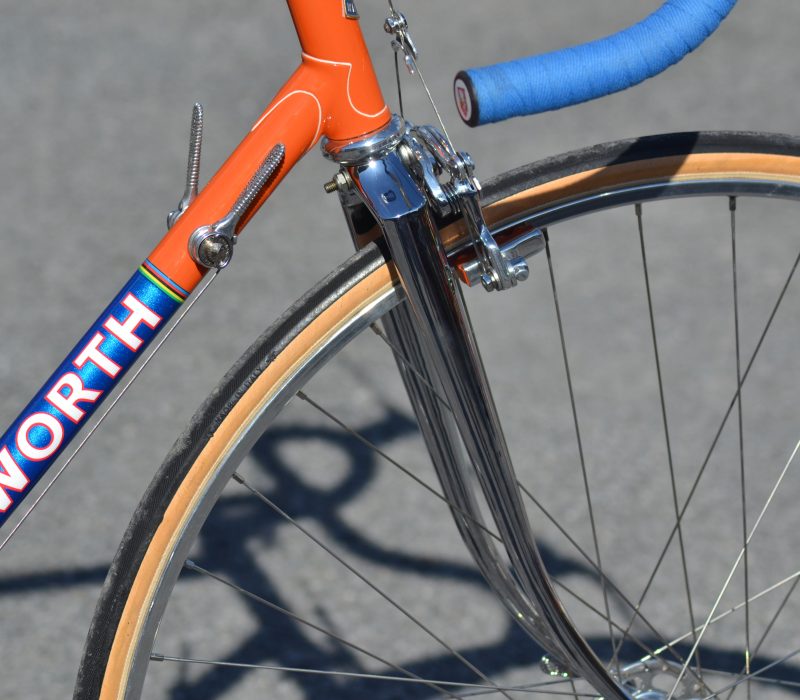 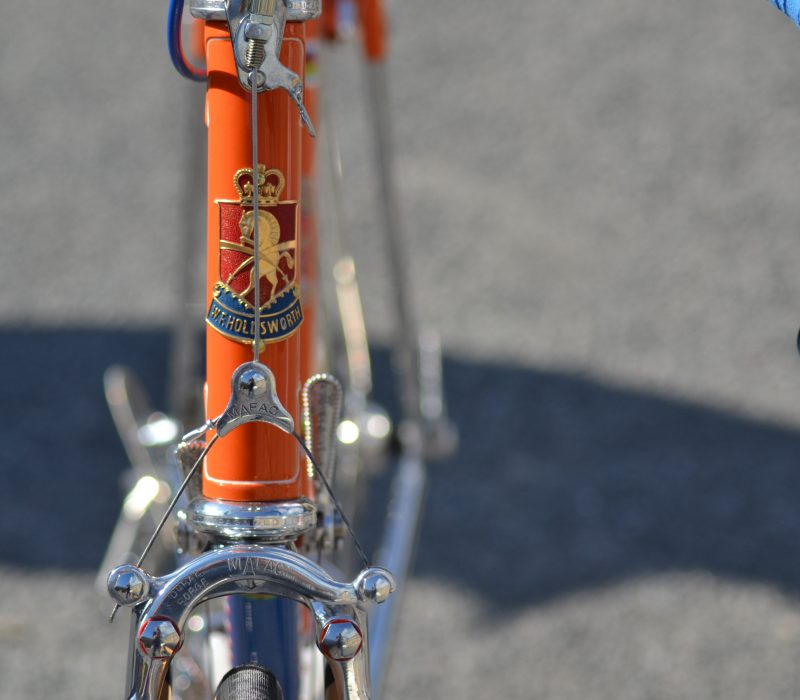 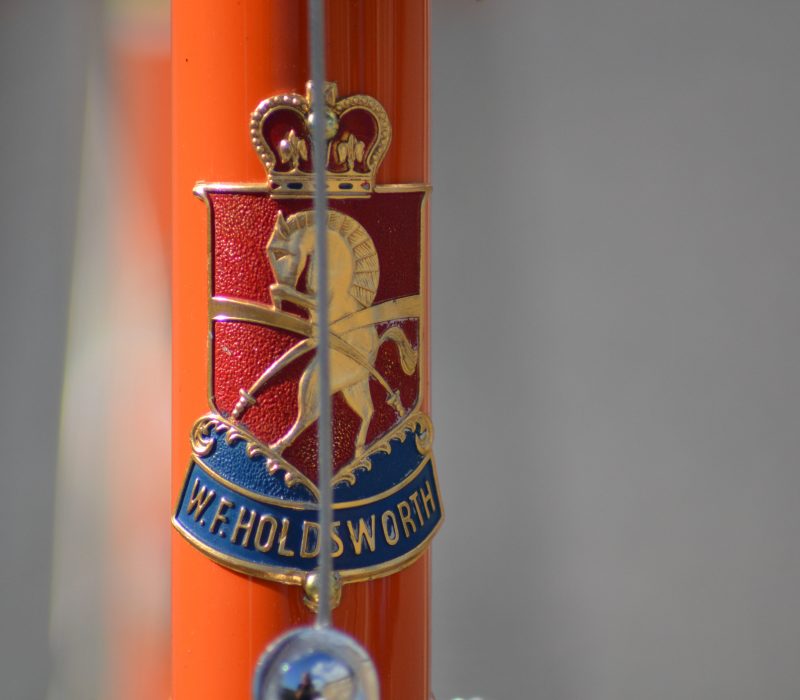 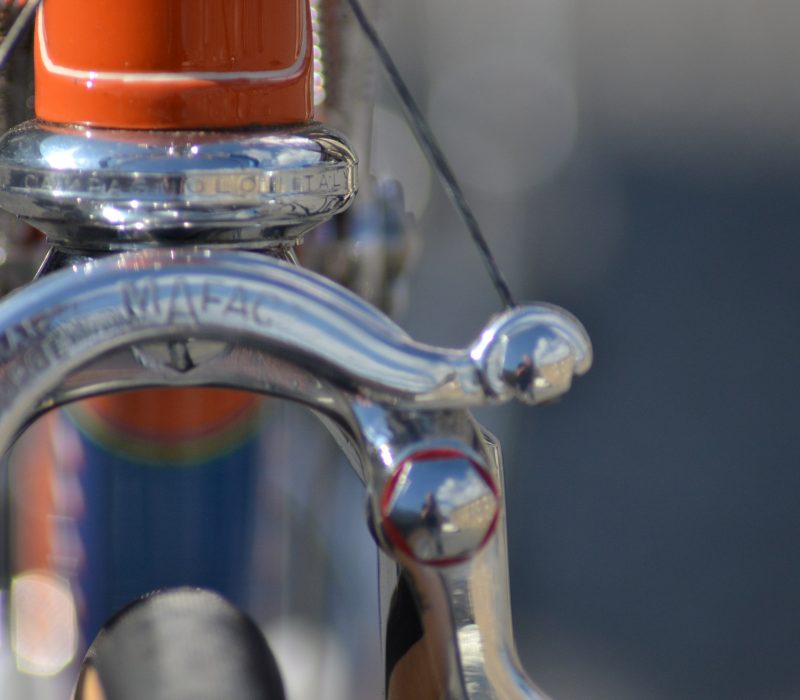 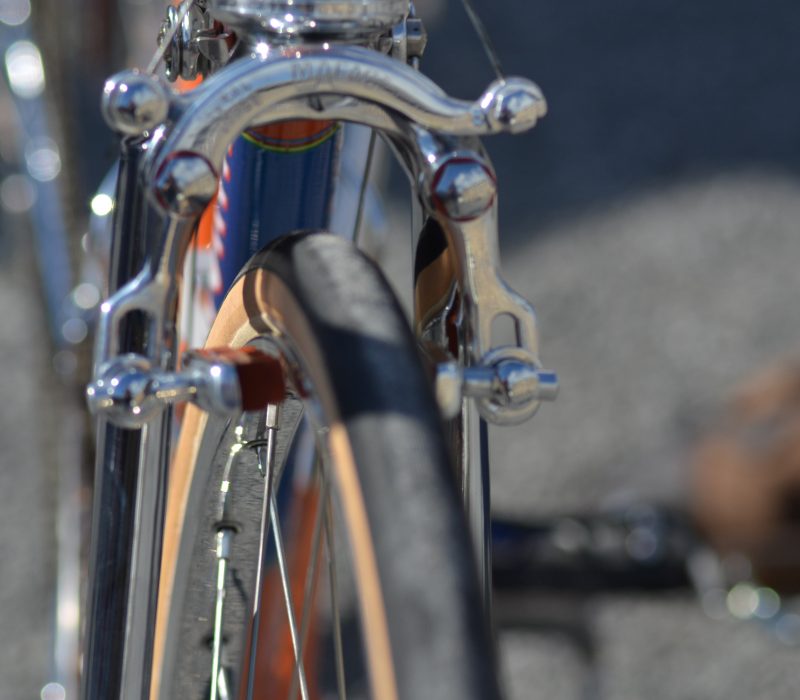 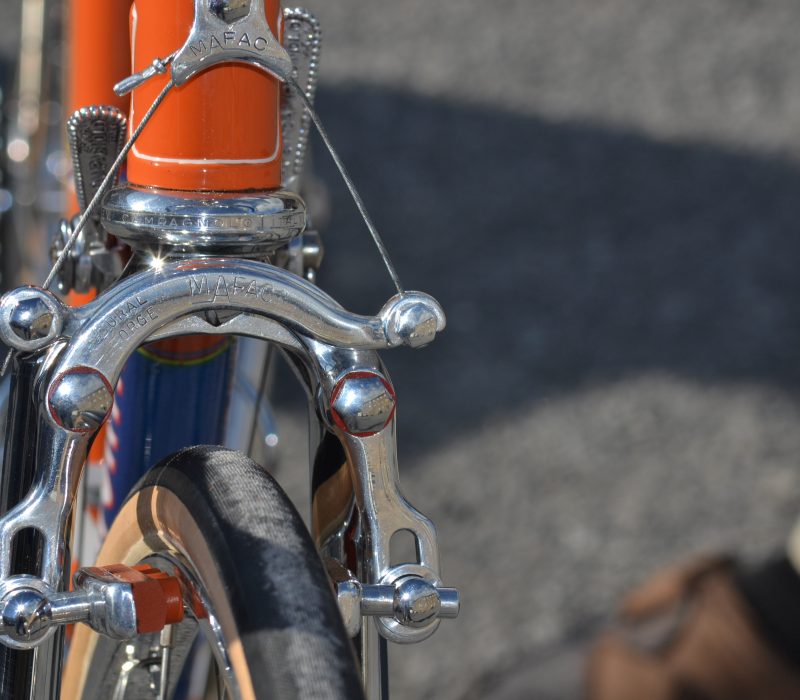 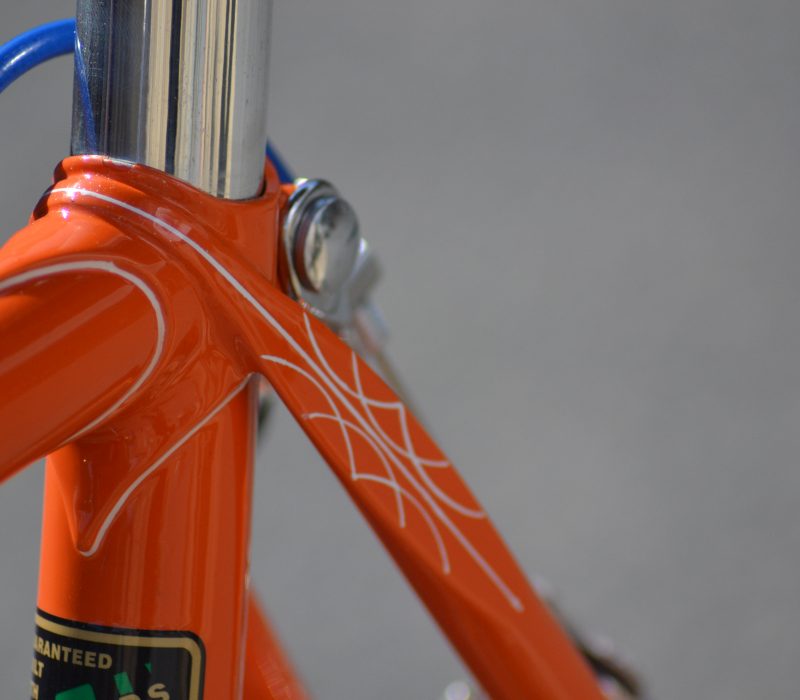 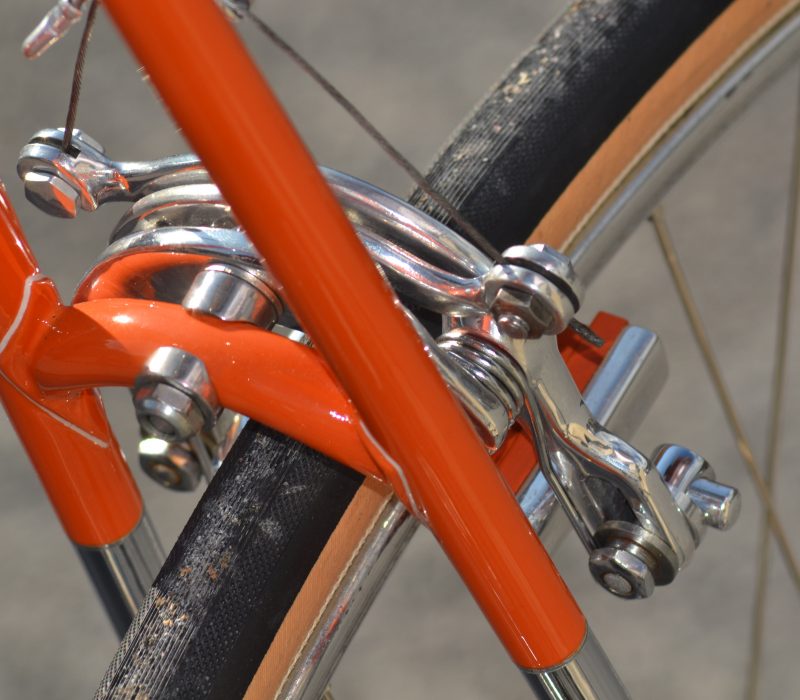 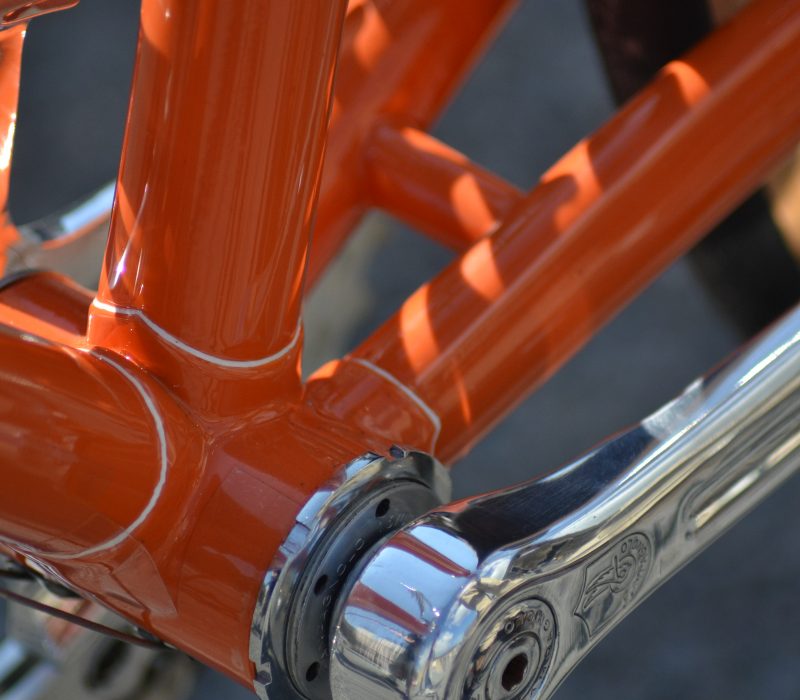 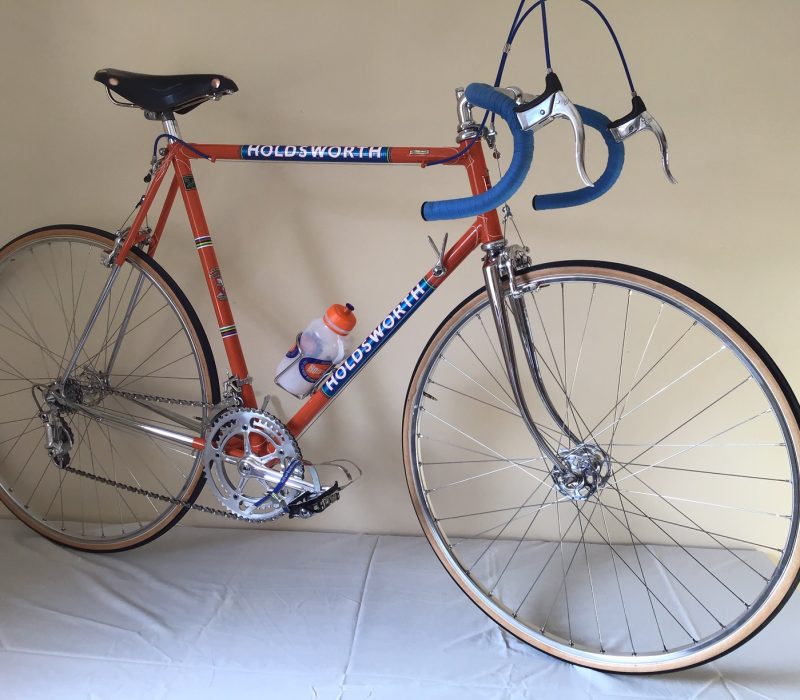 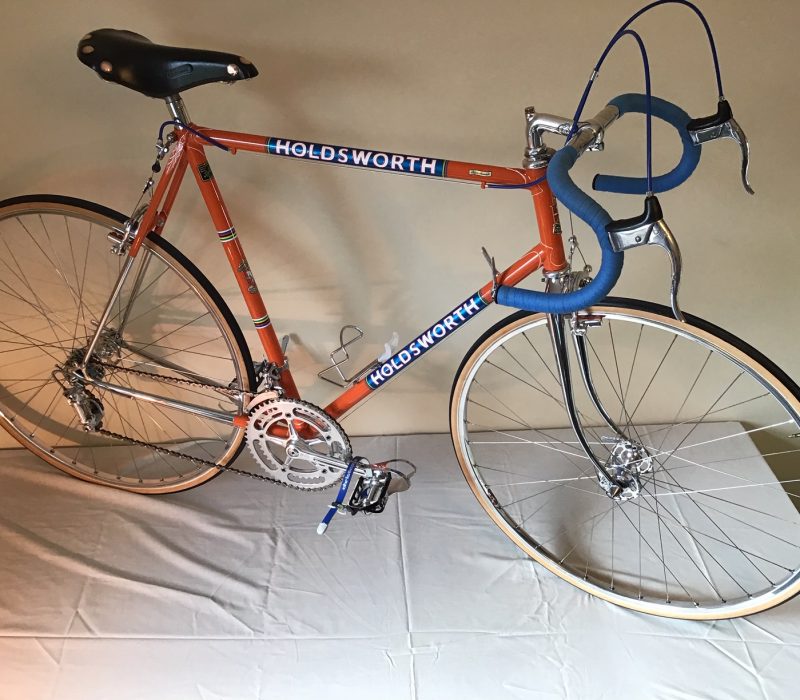 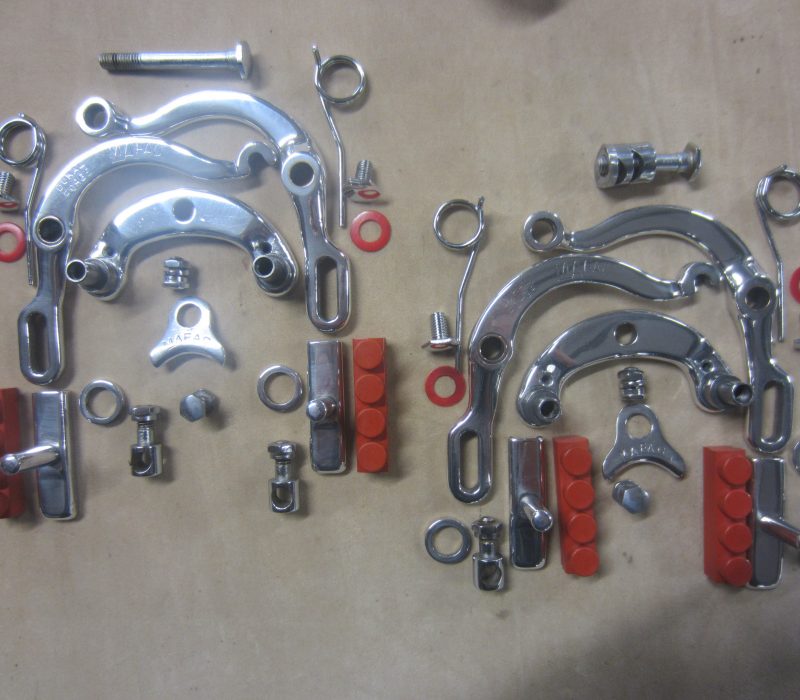 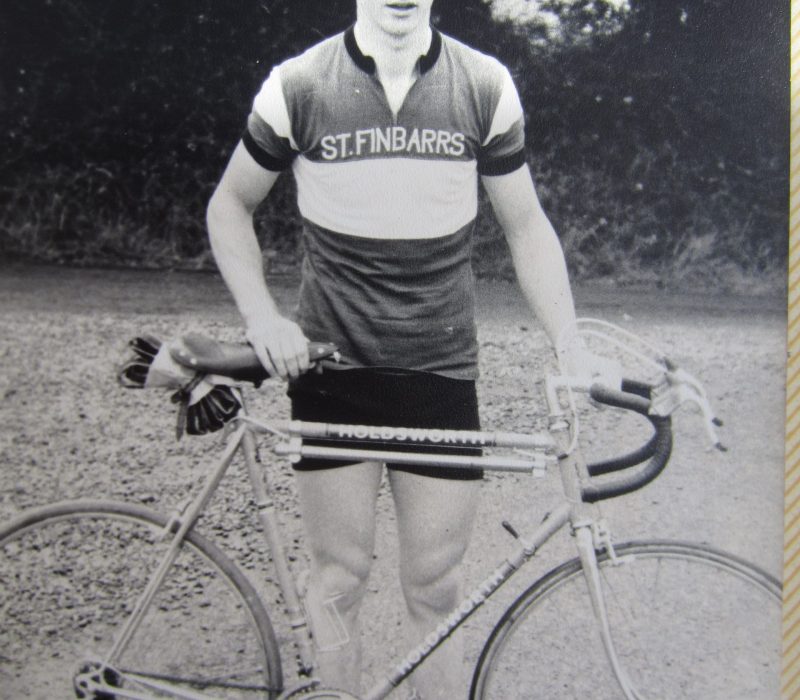 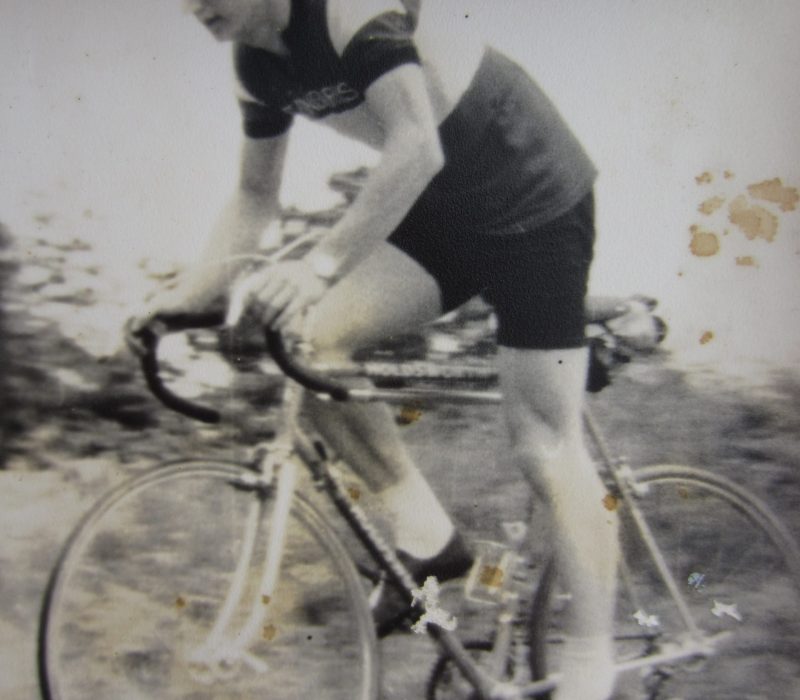