Quondam: Travels in a Once World

Every job is easier if you have the right tools, when John Devoy decided to take on a very daunting challenge and cycle through a desert in Africa he choose a Mercian. As you may be aware the OldVelos have a particular affection for this marque. Read on to hear more about how John’s relationship with his Mercian developed:

Before you read further, let me say, it’s an honour to write for OldVelos. What follows focuses mainly on one thing…a hand built Mercian bicycle. Lovers of bikes and Mercian lovers in particular, will no doubt tell me how many times ‘Mercian’ was referenced, if at all, in ‘Quondam1: Travels in a Once World.’ Honestly, I wasn’t counting! The book was written neither for-nor-about that ‘Mercian machine’. Yet, be in no doubt, when you do get to read it, you’ll understand how central it was to the success of that long-ish journey.

Now, where to begin or how?

April Fools Day, 1985, Upper Aghada in County Cork, is as good a place as any! I still recall the drizzle but the Mercian didn’t care a whit, it took me round that first bend and that was it…the beginning of a seminal adventure into a quondam world. Before anyone gets carried away, let me come clean. Back then I was no cyclist or even a regular bike user, just a guy who understood that to extract the maximum from a long-haul trip, it had best be done on two wheels. Sure, Dervla Murphy’s 1963 adventure left its mark but, though I met her and we spoke of ‘bikes’ she was of the older generation where ‘Sturmey Archer’ gears were regarded the ‘state of the art’. I made my own decision and decided that a Mercian it would be.

To sit on a Brooks B-17, atop of a Mercian frame, for two years through thirty-three countries, is long enough to feel at-one with what’s under you. One’s butt moulds the leather until they fit like lock-and-key. One’s body adjusts, unconsciously, to the bike’s ‘personality’, its ‘way’, how it ‘holds’, how it moves, what the needs are, as the weeks and months roll-by.

It was a veteran cyclist, now in ‘cycling heaven’, who first suggested for me to opt for a Mercian. Brain Murphy knew a thing or two about bikes and I, not knowing anything…duly listened and the frame was ordered through George Harding, of Hardings, that quondam quintessential bike shop in 1980’s of South Terrace, Cork city. George had the job of assembling the carefully selected components and build a true ‘war-horse’. Oh, if it had a mind (and there were times I thought maybe it had!) and known where it was being taken, it might have opted to remain on Leeside but then, innocence is beautiful – the owner didn’t know either and thus we departed a duo, a ‘Man-Mercian’ duo. We had very little experience between us but we knew that we would do it together…whatever that meant. In hindsight we must have resembled Don Quixote and Sancho Pança or perhaps more accurately, a half-dotty Don and his trusty steed, Rozinante!

In the Irish language we have a beautiful word  ‘grá’ which means, among other things, a love for someone or something. Sometimes the ‘grá’ grows slowly and that is how it was with the Mercian and me, a slow burning love. As with most relationships it started out with a mere physical attraction but for nine months or more it was a pragmatic affair, just a mechanical functionality. I had a job to do so the Mercian would get oiled and tweaked and ‘fed’…that was it really and then…twelve months later, crossing the Nubian desert…

‘It felt colder than an Irish winter when we departed the chai-station. I rummaged for a pair of trousers, pulled them on, then climbed in between my two companions. Ali, before he turned the key, rearranged my Palestinian head shaal ‘… in the arab fashion,’ he said, ‘to keep the sand and cold out’, but my concern was for the bike. It lay on the metal floor of the empty truck, tied to both sides with rope and cushioned by every item I could find, including panniers, a tarpaulin and a two old tyre tubes. This care for a bike bemused Ali, and for a good hour I tried to explain how ‘it and I’ had become a team and as a team we had to care for each other, so to speak. We had a long way to go.’

‘I had never been sentimental enough to give the bike a name. It was an inanimate object, after all, and I often felt bemused at those who christened their bikes names like Rick or Roger or whatever, yet the more I sat on that Brooks B17 saddle, the more I oiled, greased, tended and repaired, the more I tightened nuts, straightened spokes, coaxed or even kicked it in frustration… yes, the more I lived, trudged, battled and soared with this machine, the more a bond was formed and respect grew. The bike became me; that’s how it felt, like I was caring for myself. If I was to give it any name it would be my own.’

and months later in South Sudan, amid a civil war…

‘How differently I saw the bike to them, not as a piece of expertly brazed tubing with pedals, carriers, brackets, bars, not as a clothes-horse for my wardrobe, bedroom, kitchen, toilet. I saw it as a hill farmer would his loyal collie or an Egyptian fellah his old donkey, this well built Mercian machine, this unsung hero. What it had been through, and we were only half way there! I was one hundred percent attached to it now, like Flann O’Brien’s The Third Policeman, enough at least to have some private chats, which were many—‘When will we ride again, in thunder, lightning or in rain?…It’s been too long my friend. Bloody hell, if you could talk.’ I longed and dreamed of cranking up the pedals to the limit on a long straight road with a cool wind on my back—‘Surely one is coming, somewhere out there in Africa, surely.’

No more need I say about a grá for a Mercian but how our ‘relationship’ ended is another story entirely.

1 of an earlier time; former

Read more about John and his journey on his website: www.johndevoyauthor.com .

John’s book ‘Quondam: Travels in a Once World’ is reviewed by OldVelo’s resident poet and author Brendan Hennessy here: Review of Quondom: Travels in a once World 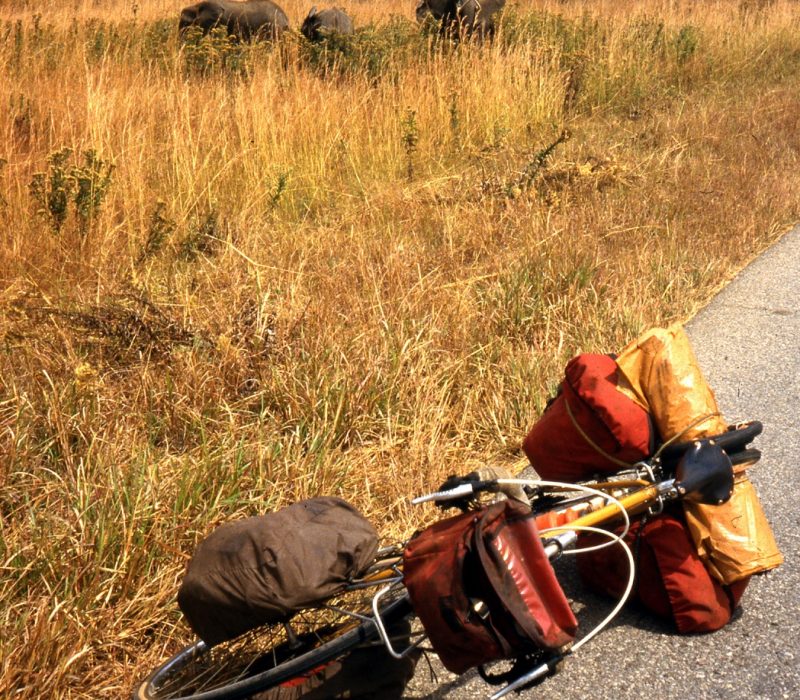 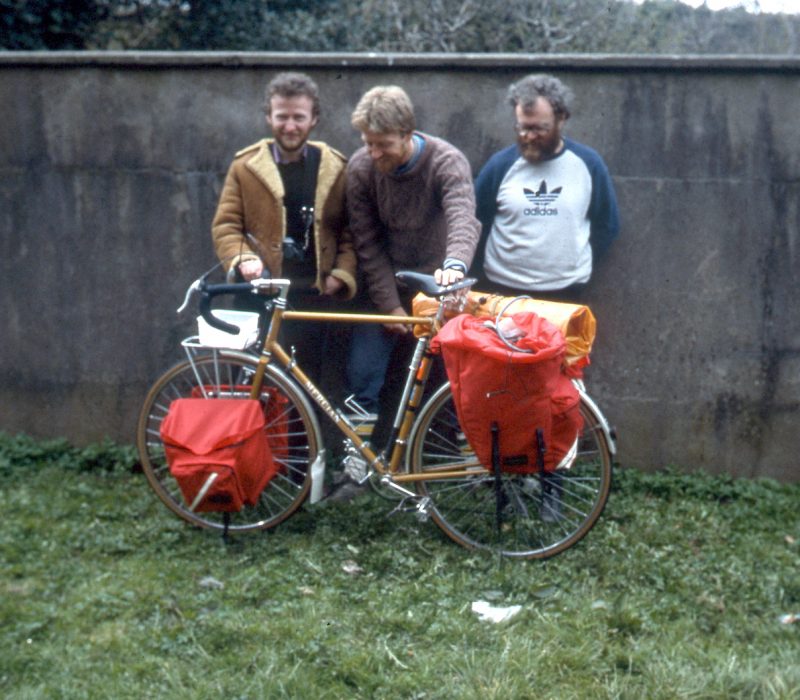 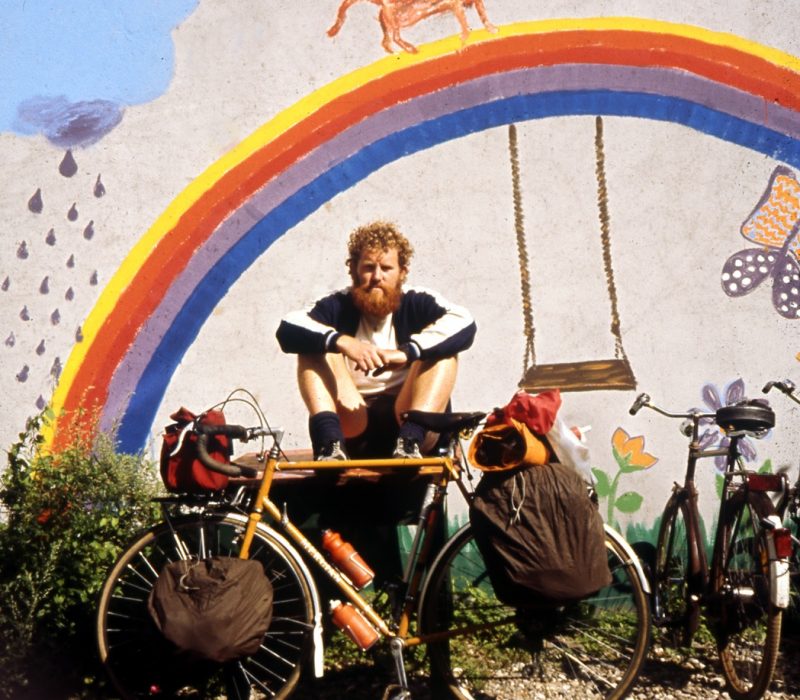 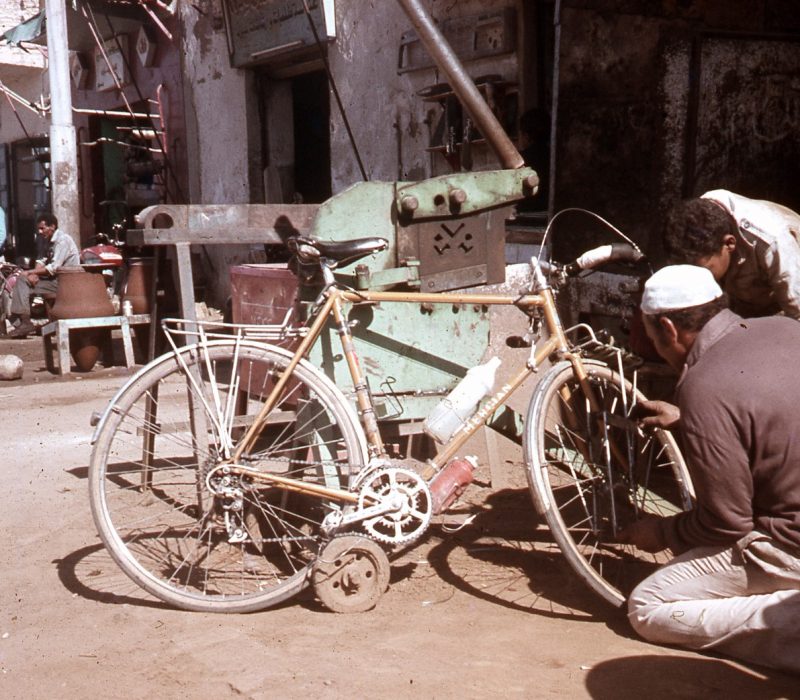 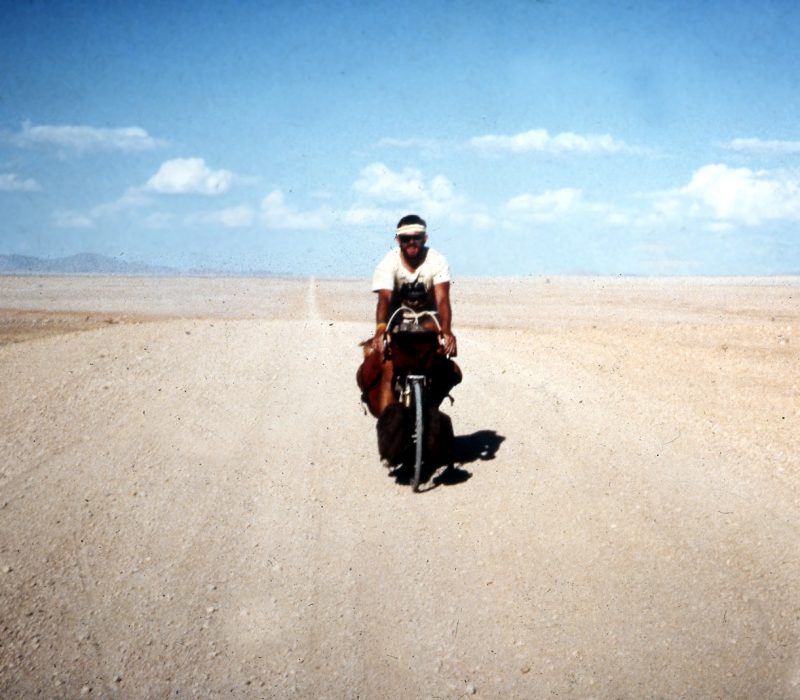 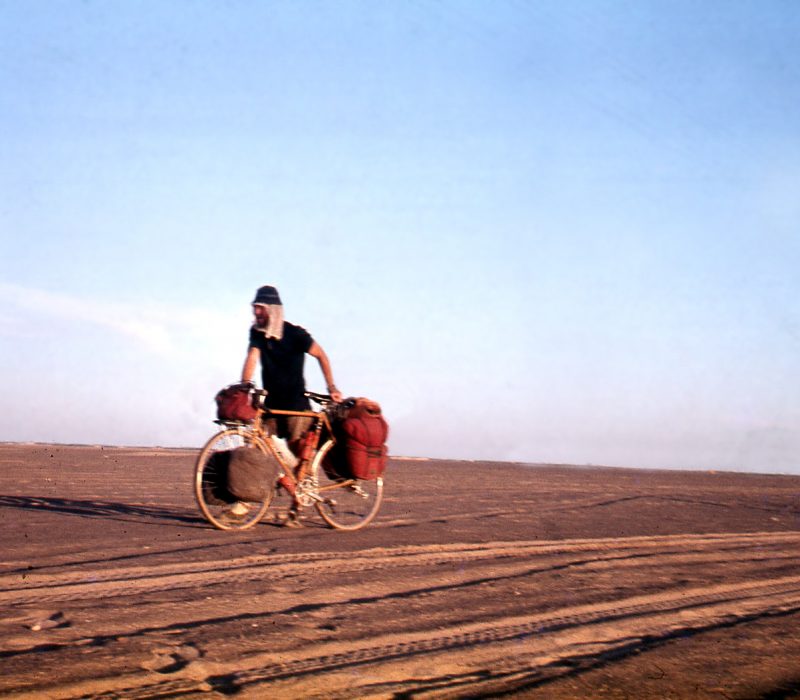 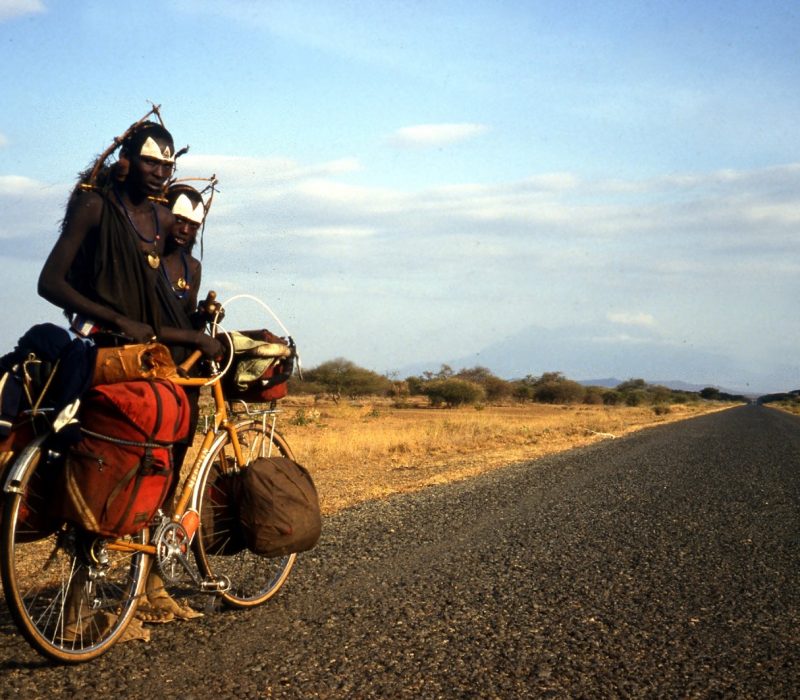 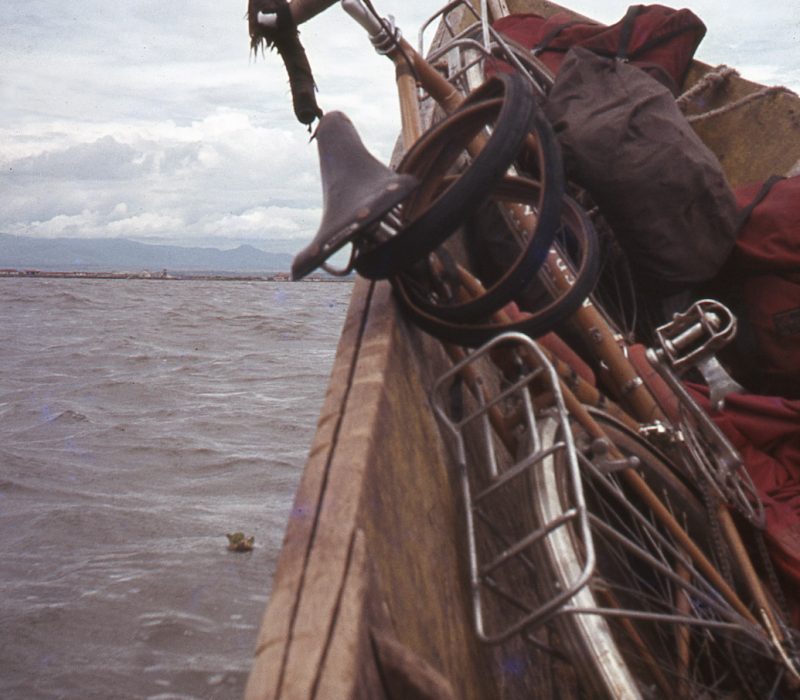 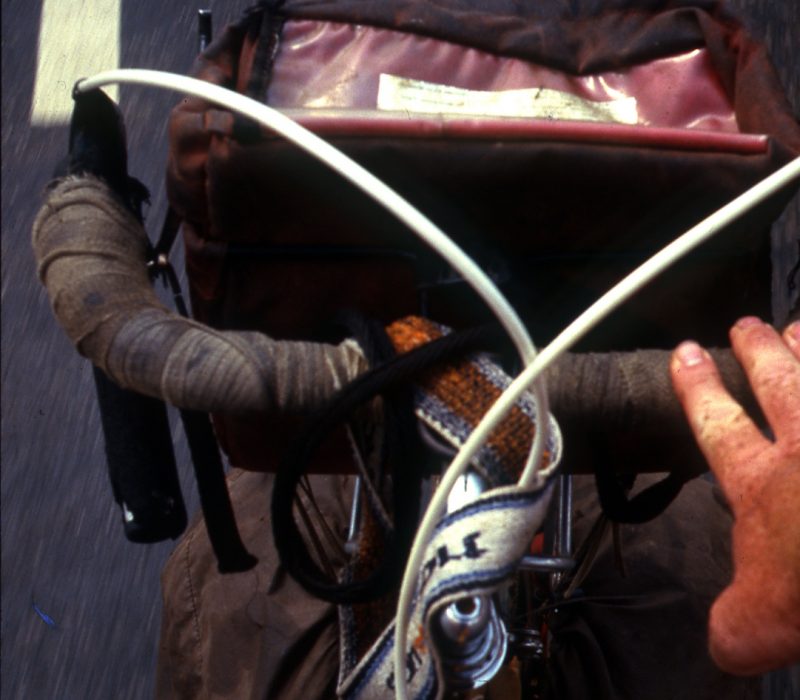