An Irish Corner in Berlin – a visit to Cicli Berlinetta 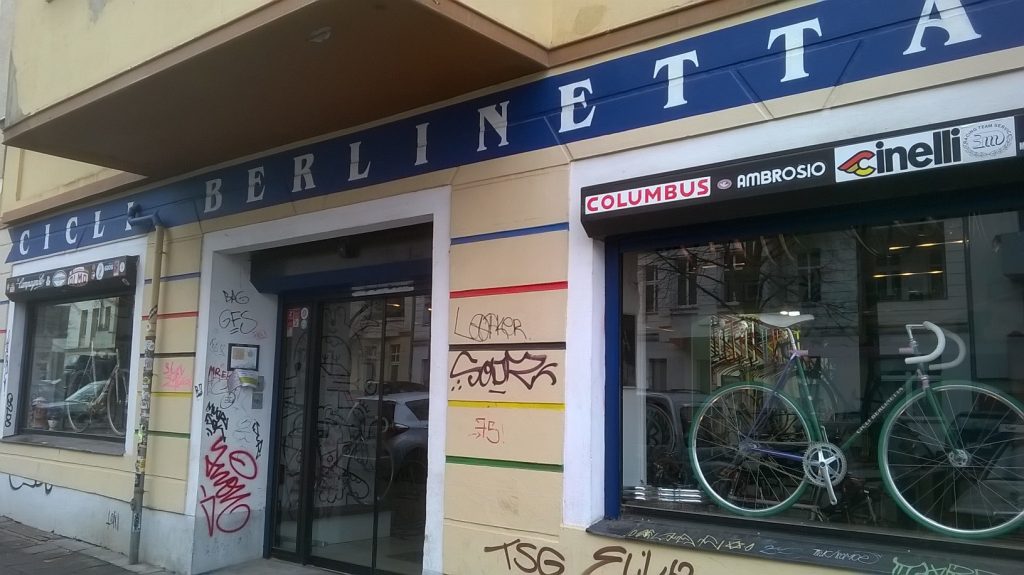 I had stumbled past this bike shop eight months ago. It had been a late night celebrating the birth of my nephew and I had taken a wrong turn.  Whether I was hallucinating or dreaming, the apparition was my type of mirage in the desert of communist era shopfronts and ‘wohnungs’.  A vintage bicycle shop with a display worthy of the famous museum at Madonna del Ghisallo.  “I must come back tomorrow (when I’m in a fit state)” and I did.  It did exist!  But, it was closed. 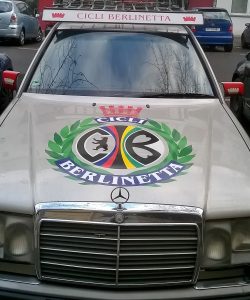 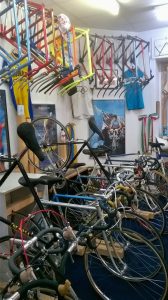 I recently returned to Berlin, primarily to see how the young lad has progressed since we wet his head 8 months ago, but with an ulterior motive also.  Like a visit to Cicli Berlinetta.  To be honest, I wasn’t sure what to expect.  I’ve had my high hopes of such bike shops dashed before, my only hope today was that it would be open.  The liveried car outside suggested it would.

For all our love of the golden age of cycling and its continental heritage it never ceases to amaze me how, overseas, the Lingua Franca of the velominati is Anglais.  No different here, as I overheard ‘Campagnolo’ mentioned in the same way as we do at home.  An emphasis on the ‘G’, which is why Italians don’t pronounce ‘Campag’.  I hate intruding in these shops, especially knowing my desire is bigger than my wallet, which of course will be perfectly obvious to any experienced owner.

I am however a collector and restorer and always hope that I can share camaraderie if not ingots. 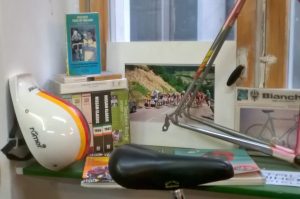 I’m also Irish and seeing a corner of the shop dedicated to the Tour of Ireland and the Nissan International Classic really made me feel at home.

Dustin, the very welcoming owner took in my accent as I asked if I could look around; he saw my ever-widening eyes as I absorbed his fantastic collection; he responded in the affirmative to knowing OldVelos and no, he wouldn’t mind if I took a few photos.  We spoke about cyclocross, the Laserman of Cinelli fame and the importance of bikes been ridden and not just restored.  I must admit I drooled a small-bit taking in his tandems.  Shops usually have none, here were at least three. 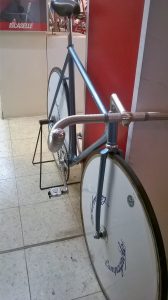 “Here’s something exceptional” said Dustin, ‘would you mind holding these bars while I take it down?’.  Pristeen the Magni was, but that’s not what caught my attention. Everything was pared down, right down to the diameter of the tubes.  “It was the lightest bike of its time, just shy of 7 kilos, the German builder kept challenging himself to make his bikes lighter, faster, tighter.”

Other than the name of ‘Magni’, no names adorned the machinery, epithets were lost in the polish.  Nor was this bike in hock to any one manufacturer, as the parts were chosen for how much alloy could be dispensed without compromising functionality.  I spied what looked like dia-compe brake calipers, a suntour cyclone rear derailleur and some parts that started off as campag.  The hubs were perfected on a personal mill, the spokes followed suit.  The columbus tubes were a smaller diameter, the headset and bottom bracket correspondingly so.  This of course required an artisan stem and seatpost.  Magnesium was lighter so titanium was jettisoned.  If the rider wanted comfort from the bare bones of a Concor saddle they better wear a chamois.

It must have been at this point that beauty got the better of me as I realise now that I took no photos.  What an awful mistake, but I’m hoping Dustin might oblige with a photo on the Cicli Berlinetta website https://cicli-berlinetta.com.  It’s a wonderful resource with a collection of finished bikes we might dream of and rare components at realistic prices that will allow you to complete your restoration’. 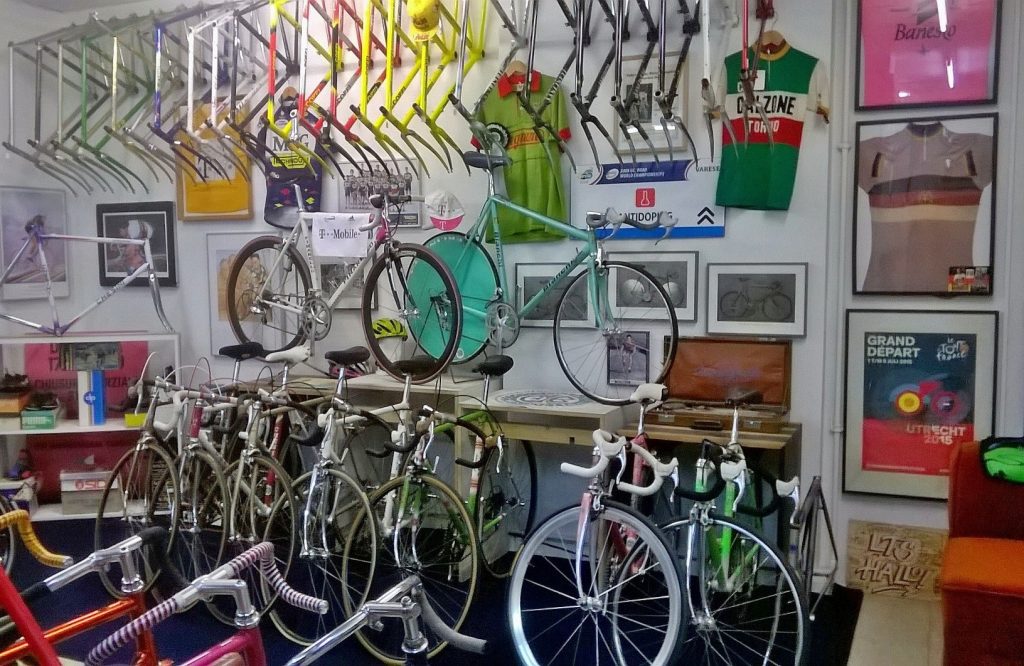