When two tribes go to war

When two tribes go to war – The Munster Cyclocross Championships 2018 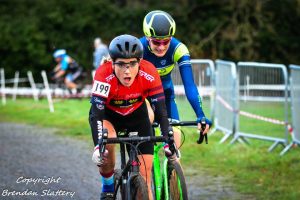 Too often women’s races are relegated to postscripts.  In this blog I’m afraid the men’s race again gets the mention.  However, if you want excitement, skill, tenacity and competition this one picture by Brendan Slattery tells everything you need to know about the victor and vanquished in the Women’s Munster Cyclocross Championship 2018.  Congratulations Grace Young and hard luck Lisa Stapelbroek.

“Maes has won.  Maes we celebrate.  Not just the vivid, vigorous man himself (despite calves as flat as a Breton crépe and shoulders that scarcely stretch beyond the limits of his jaw), but the qualities he represents, qualities without which the race will spurn you and slip out of your grasp”.

That’s an extract from a report of Sylvere Maes win in the 1939 Tour de France; this is a report of Richie Maes win in the Munster Cyclocross Championship in 2018, from the event’s new home in Clonmel, Co. Tipperary. Why Tipperary?  Maybe because it’s the home of the most significant provincial championship in Ireland.  The Munster Hurling Final will always be played in Tipperary.  The top teams always rise to the top, their management receiving many column inches.  Houses are bedecked in bunting, old bangers are sprayed in the competing colours.  Heroes are made, reputations are punctured.

At the Munster CX Champs the top teams also rose to the top.  They managed this with just a few sponsorship inches on their jerseys.  The course was bedecked in winter sunshine, bicycles and bodies and competitors were sprayed in mud.  Heroes were made, tyres punctured. 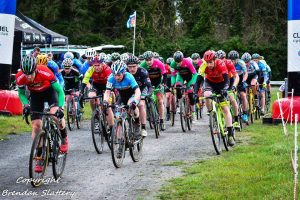 There were two tops teams in Clonmel last Sunday, Killarney CC and Strata 3.  Sure, Páidi O’Brien, 2nd on the day, may feel aggrieved about being left out, but he is a solo courier from Team Gerard DHL.  Richie Barry may feel similar, but he got a write up all of his own in November. Fourth the day he snapped his chain, fourth this day he remained.  Other clubs deserve their mention, but by now they’ve probably stopped reading.

Killarney CC turn up at cyclocross events like your favourite cousins who you’ve waited for all day.  They gaily occupy your home with happy abandon, be it in Clare, Cork or Clonmel.  They bring their partners, kids, grandparents in cars and people carriers.  Theirs is a bubble that doesn’t burst when you pop inside, but it’s a bubble nonetheless. Look through the many race photos and you’re as likely to see the laughing face of a Kerryman or a child the spit of his dad in the underage crowd.  That’s not to say that KCC don’t take their cycling seriously: they do, they just don’t take themselves too seriously.

Strata 3 Velo Revolution – to give their full name – are a no fuss racing team.  They race.  To win. Here come the cousins that your mum says, ‘why can’t you be like them’.  “Because I’m not LIKE them Mum”.  They train to compete, they hydrate to push hard, they nourish to vanquish, they have talent (not like me Mum), they practice sprint starts for God sake!

Killarney CC and Strata 3 lined up at the Munster CX Championship last Sunday with winning on their minds.  For Killarney the spoils for grabs were great with entries in underage, overage and seniors (it is worth noting there is not one Killarney rider left amongst the B race, a race that deserves its own league).   Strata 3’s three riders all lined up for the A race.   Trevor Woods, Matt Slattery and Michael Lucey in red and yellow, lined out beside Killarney’s Richie Maes, in red too, his jersey the league leaders. 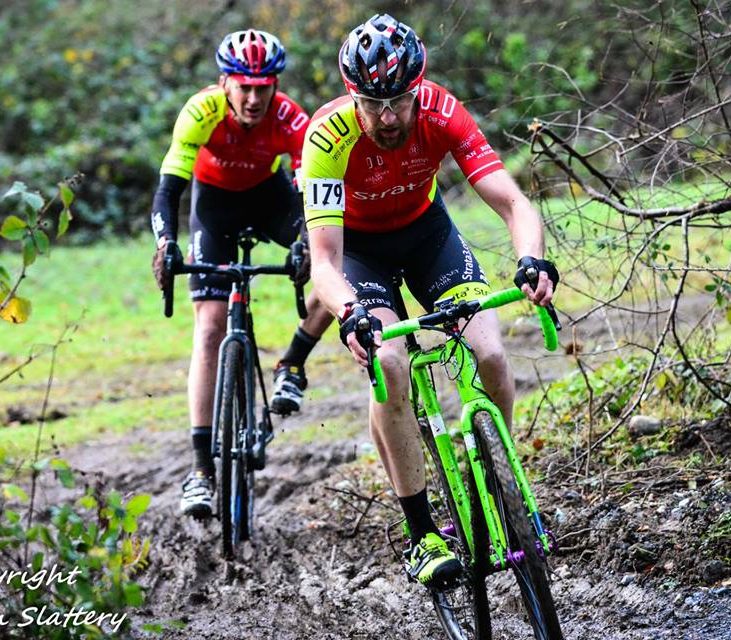 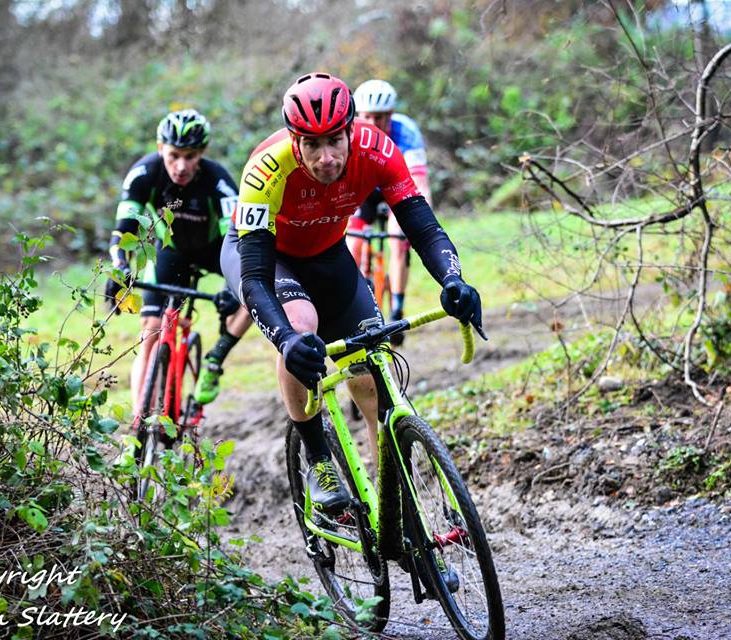 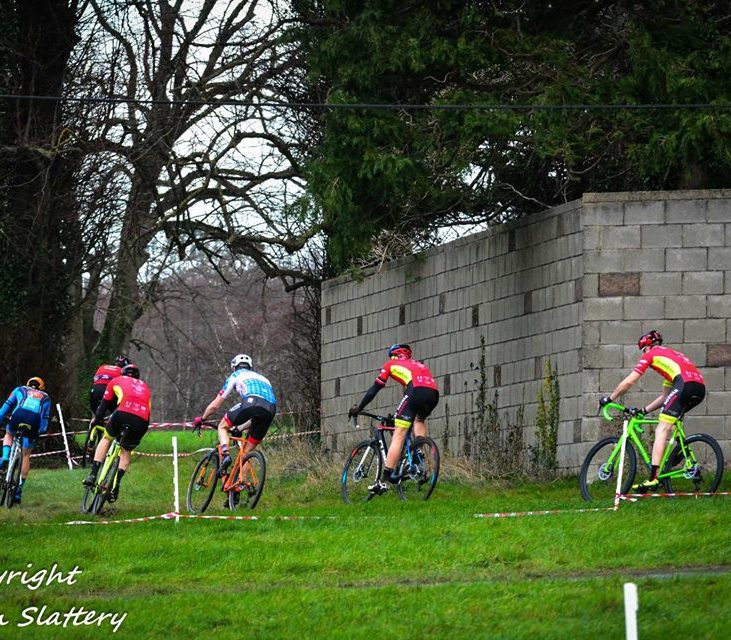 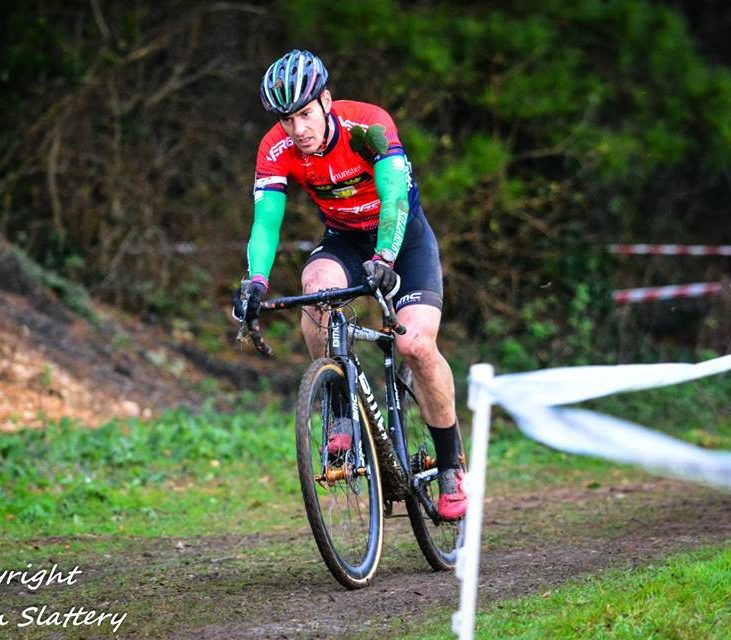 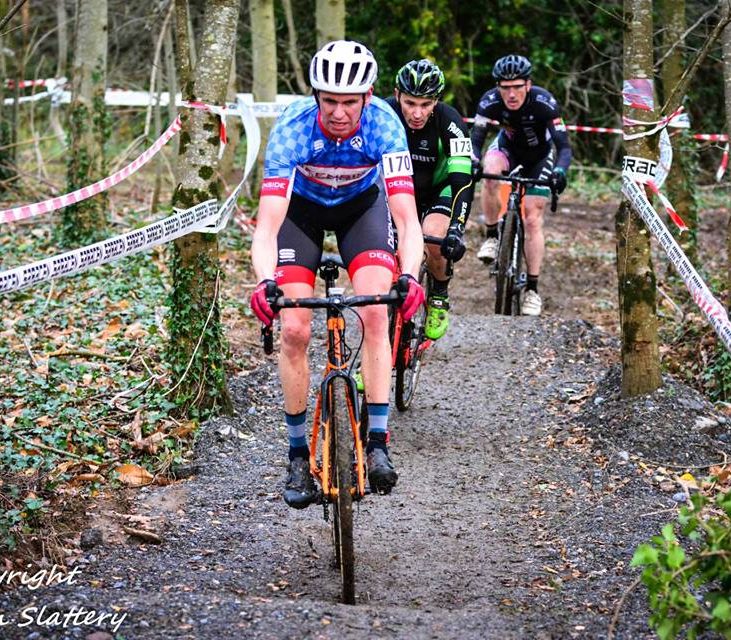 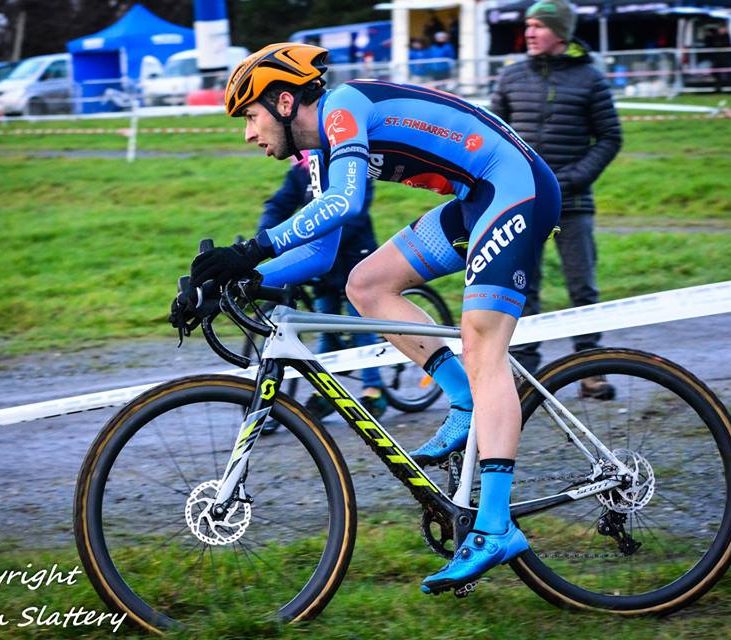 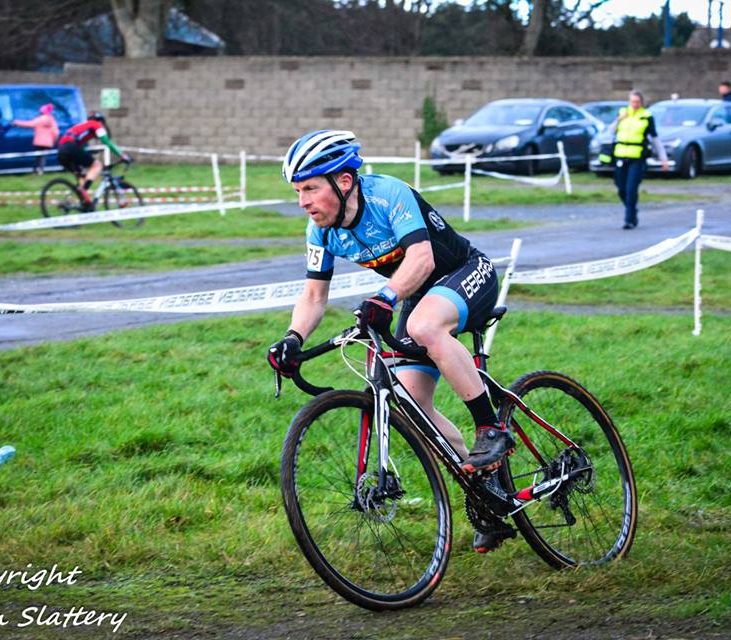 Maes, riding in his typical style – chest up with one shoulder ready to drop – tore off from the front.  Páidi O’Brien and Richie Barry stayed tight on his tail, Andrew McCabe (a welcome addition to these pages) once again unobtrusively did his work.  And then came the Strata 3. Sometimes Slattery, sometimes Lucey, other times Woods to the front.  Was this teamwork or happenstance?  Lucey disappeared from the view of his teammates – was he behind or ahead?  Hard to say.  Hard to say what happens around the backwoods of the cyclocross track.  Maes emerged with foliage pinned to his jersey – perhaps a nod toward the green leafed national champs in January, more likely a close encounter with a tree.  But which of the Strata Three would be leading the chase behind?

It may have been Woods.  Woods, whose only sign of anguish resides in his eyes, was keeping his lines as clean as his bike and wished he had shades.  Lucey, cheeks puffed out, blew and blew but seems to have come unstuck in lap six.  That leaves Slattery.  I recall him suffering up the Bull Crowley’s punishing hill in the first of the league races in Killarney, yet he seemed to be bossing it now, pursuing Maes and O’Brien who were still out in front.

Bang! Last lap. Maes punctures.  His 40-second lead on Páidi splutters. The sidewall of his tubular tyre scrapes the gravely ground, each plunge and turn testing the careful application of the shalloc glue.  Páidi chases and Matt sees the distance between trees become the gap between turns.  Maes pushes on, daring his tyre to slip its rim.  Páidi’s piston legs pummel the pedals, Matt’s chest craves more air.    ‘Of all the places for a gravel finish’ thinks Maes, keeping the bike just light enough to maintain eight seconds between himself, the finish line and O’Brien.  Four seconds later Slattery crosses the line in third, soon to be joined by Woods (5th and first over 40) after Richie Barry, then teammate Lucey and then Conor Kissane, another Killarney man. If I’m right that’s five riders from two teams in the top seven and more impressive again, Maes has won six of the seven league races.

Some say cycling is a team sport, but for others it’s a collection of individuals.  That same question was on the mind of the 1939 Tour reporter after Sylvere Maes won with only limited help from his team:

“The truth varies with the identity of the riders.  What can be appreciated, thanks to the Tour, is that the riders need to love the ordeal they have undertaken to be able to accept everything that it throws at them: the changes, the setbacks and the snubs as well as the joy, the good fortune and the bouquets that success brings”.

So true too of our cyclocross riders and the ordeals they sign up to, like the National Championships in a month’s time.  See you all in Fota in 2019.