Thanks to David Voss (of Toronto) for the stunning photos and for sharing the details of his Olmo restoration. The bike build is still ‘work in progress’ but hopefully he will share it with us when it is completed. 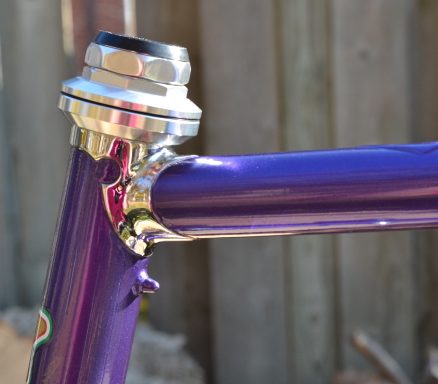 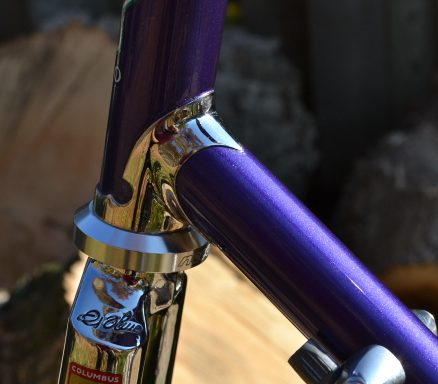 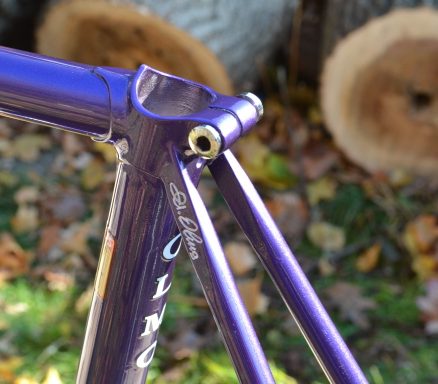 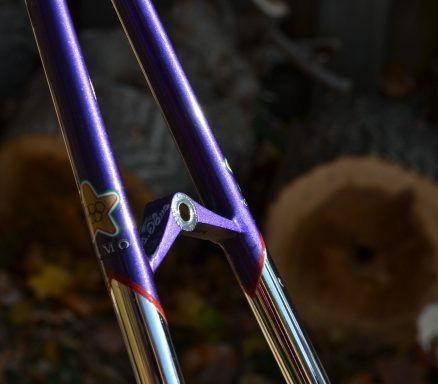 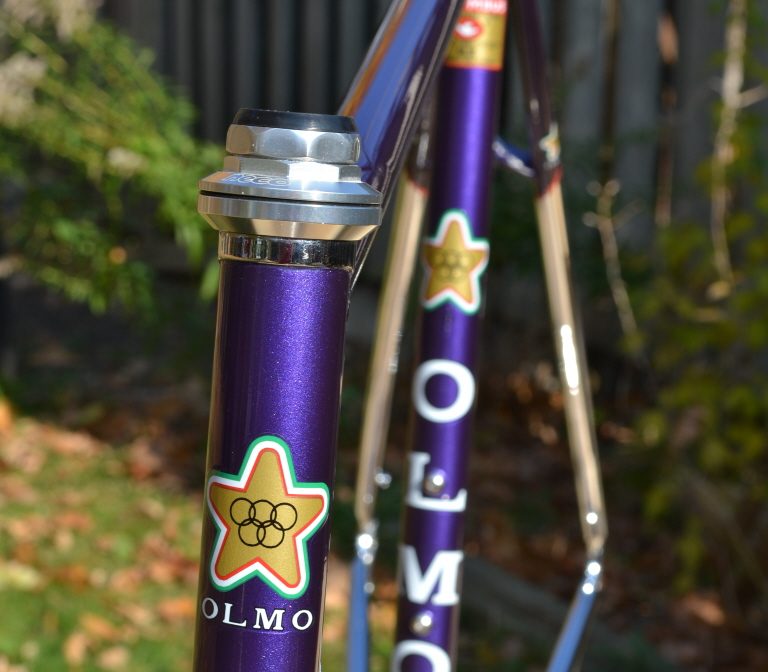 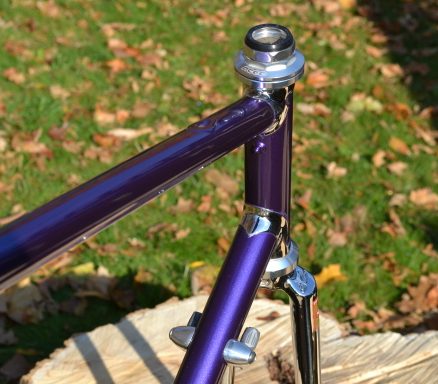 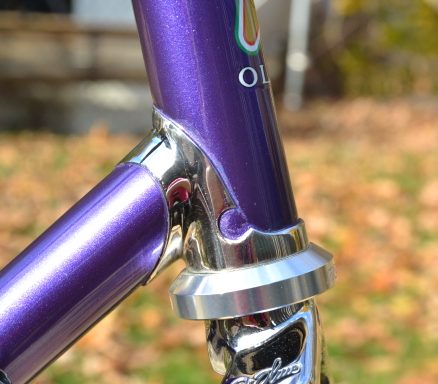 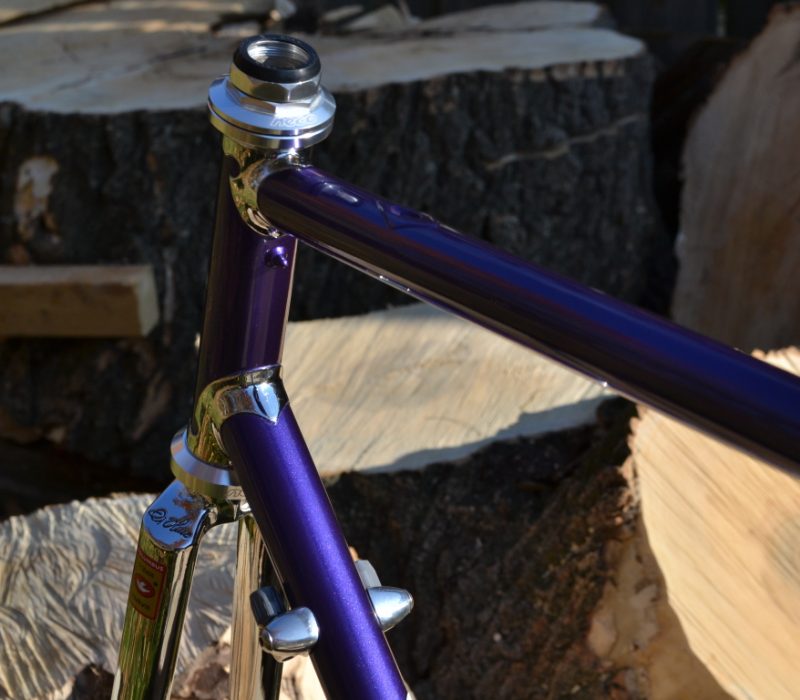 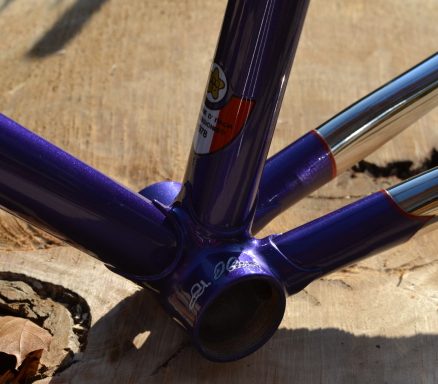 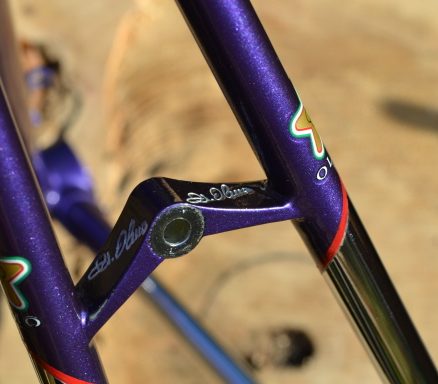 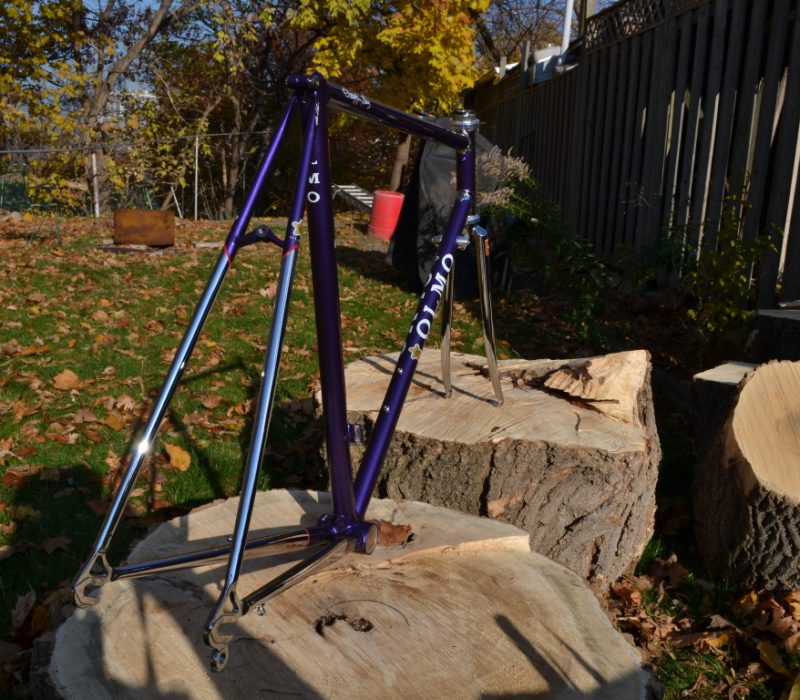 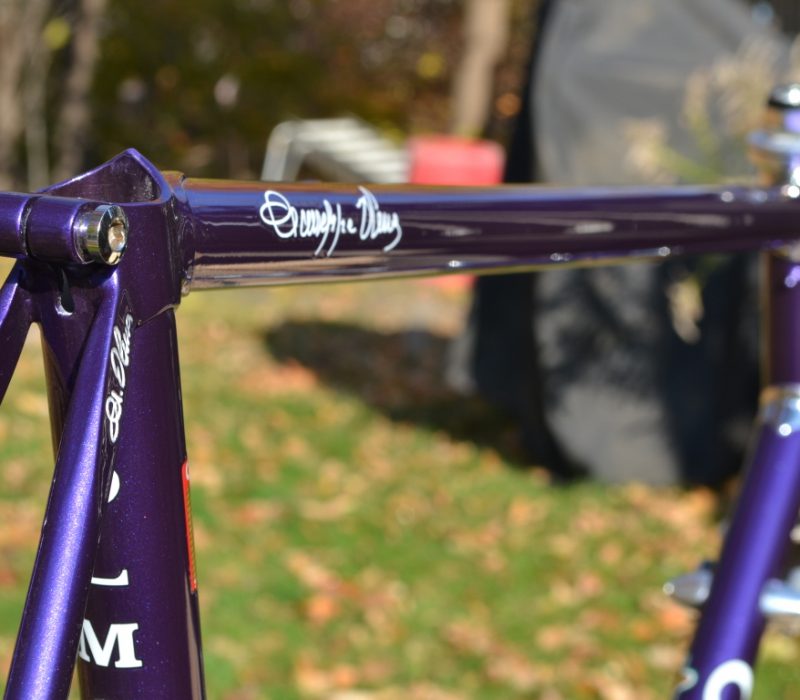 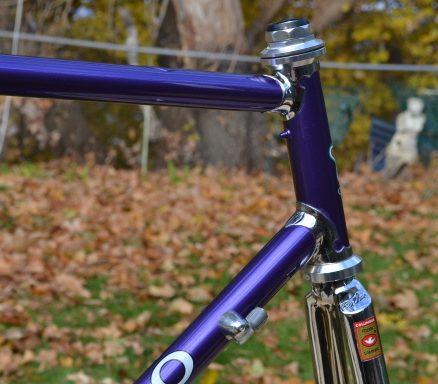 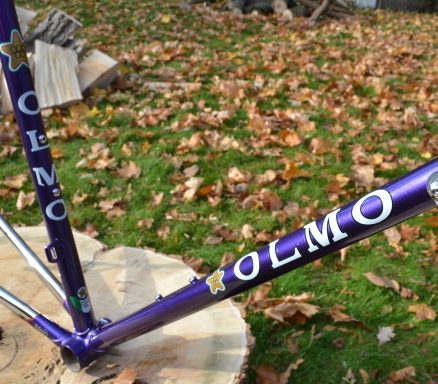 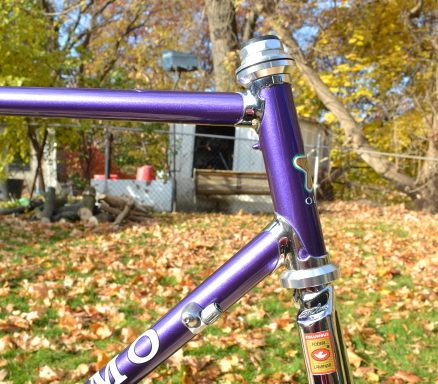 Paint and chrome on the frame and forks was seriously chipped and scratched and flaking when I received the frameset.  Fortunately there were no dents in the tubes and no signs of rust.  The frame was chemically stripped down to the bare metal sanded and smoothed out prior to handing it over to the chromer.    Upon return of the frame, I masked off the areas I wanted to leave chromed and proceeded to scuff the chrome that was going to be hidden by paint.

The frame was primed with Eastwood 2k epoxy primer, sanded and a final sealing/primer coat was applied.  The colour was provided by AutoAir Color pearl purple base coat followed by a coats of Eastwood 2k High Solid Euro Clear coat.  The decals that I had ordered from Australia were applied and two more coats of clear were applied.

The finish was allowed to cure for several weeks and then wet sanded with a progression of grits starting at 1000 and ending at 3000 grit.   Finally the frame was polished and waxed to bring out the ultimate shine.

Unfortunately I do not have the parts to assemble a complete bike at the moment, over the winter I plan to source the parts to complete the build.  This is my first serious attempt at restoring a vintage steel bike.  As you can see by the pictures the paint job was completed in late fall.

I started the project in the spring having found the frame stored in a neighbors garage.   It was originally his sons bike and had not been ridden since the early to mid 1990s.  The components had been taken off and given away or lost and the frame and forks had been shuffled around over the years.   The original finish was a silver and blue fade that did not present well.  The chrome was faded, scratched and flaking in places.  The paint was heavily chipped and in need of repainting.

I debated about restoring it with a original spec paint job, but did not think that it brought out the beauty of the bike.  I decided to paint it in a deep pearl purple that was modern but would not look out of place.

Delighted to be part of it. Dmitry, my 12 year old son, END_OF_DOCUMENT_TOKEN_TO_BE_REPLACED

Great weekend folks. First one for me, wont be the last and END_OF_DOCUMENT_TOKEN_TO_BE_REPLACED

Just wanted to say thanks for last Saturday, really enjoyed the day, END_OF_DOCUMENT_TOKEN_TO_BE_REPLACED

Of all the cycling events I have participated in, this one definitely END_OF_DOCUMENT_TOKEN_TO_BE_REPLACED

I started a vintage bike project during lock down, It's  a1986 vitus END_OF_DOCUMENT_TOKEN_TO_BE_REPLACED

Seeing a mutual love of self propelled two wheels, I jumped in END_OF_DOCUMENT_TOKEN_TO_BE_REPLACED