Round 6 of the Munster CX League: The Chairman’s Spare Wheel and other Stories

Chairman of the Munster Cyclocross Championships is not an epithet that weighs heavily on the shoulders of Over The Hill CC stalwart Pat McHugh.  Nothing is a bother and a problem is only a solution missing a smile.  Is there nothing that can ruffle this gentle giant of Watergrasshill? 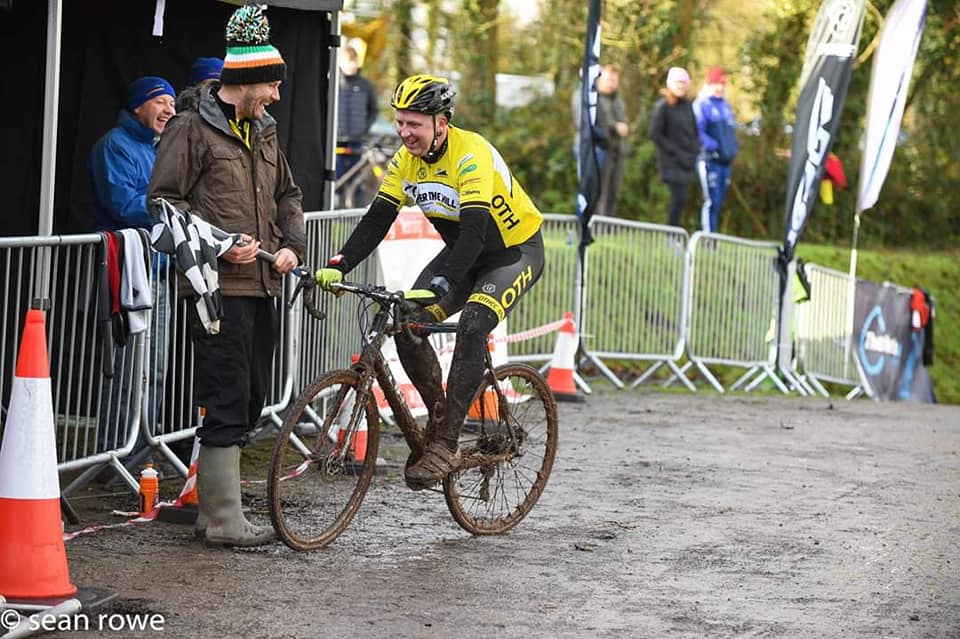 Well it seems there is.  “Pffffffffff” went his rear tyre not far from the pits.  “Phewwwww” went Pat ‘not so bad that’.  “Whaaaaaat my spare wheel is still in HQ?”.  “Damn and blaaaaaaaast” he cries.  Can anybody help?  In stands Jerry Ryan, chairman of Round 5 to rescue chairman of Round 6 of the Munster CX league.  Chairman’s honour. 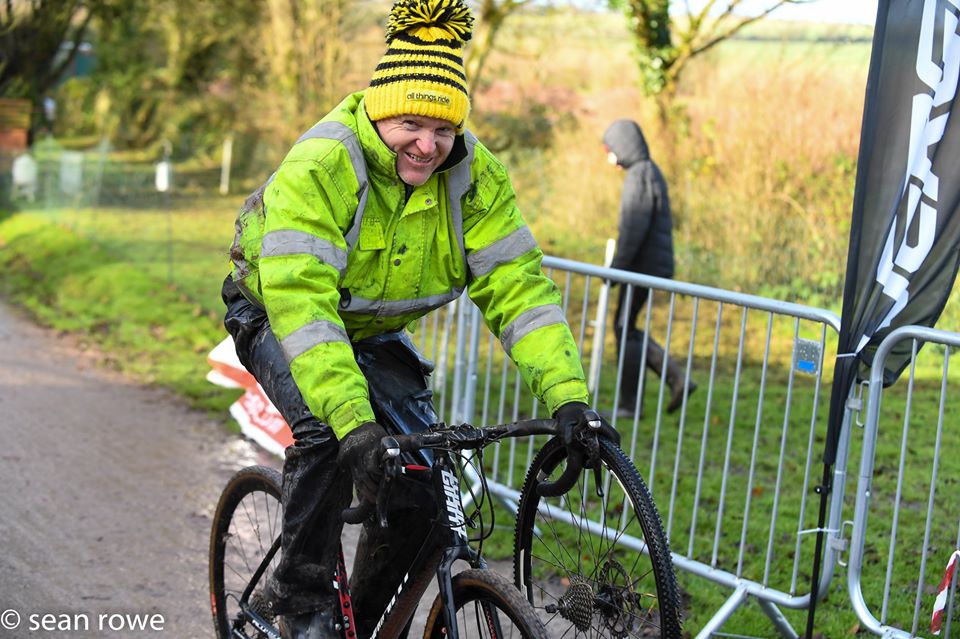 Watergrasshill.  The place even sounds like it was named after a cyclocross race, and is so named, I believe, because Watergrassmud was already taken elsewhere.  Yesterday’s racers were eager to tell me last year’s mud was worse, in other words ‘better’.  But Drygrasshill we are not and so all the contestants, U-6 to U-16, B to A, Juniors, Ladies and Gentlemen battled it out in trenches dug by their forbearers. 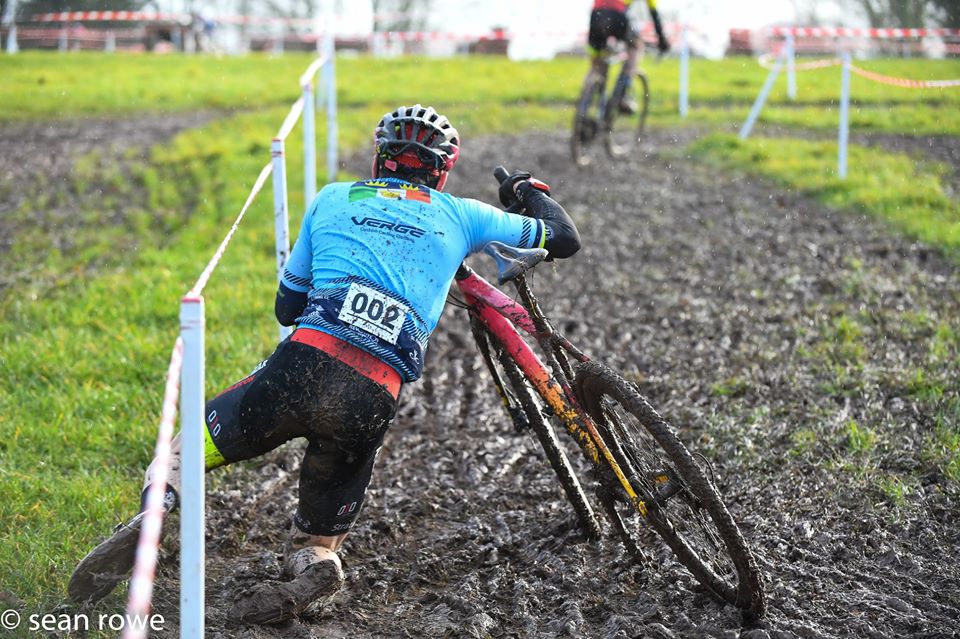 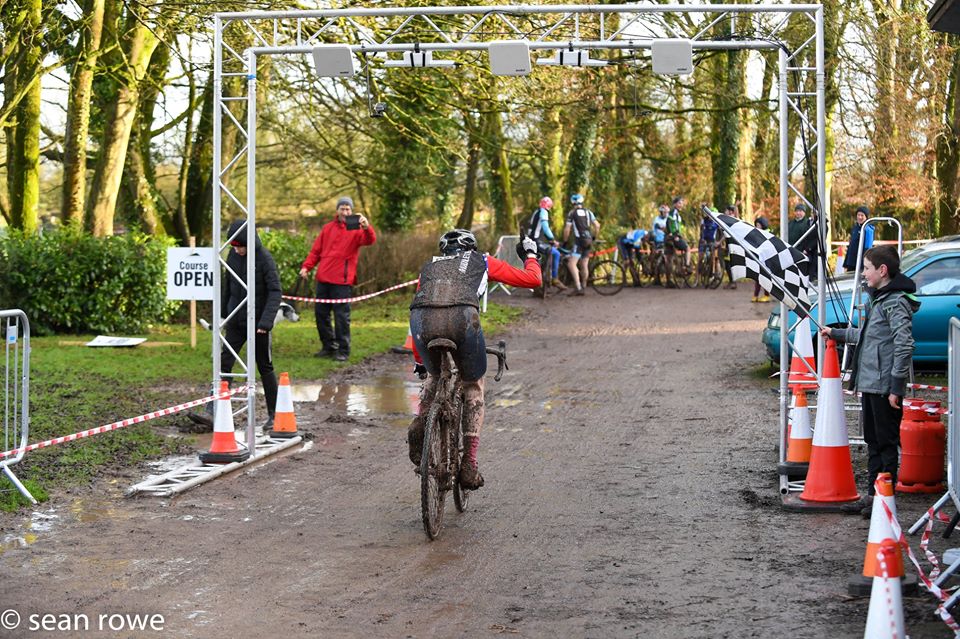 Alan Frame, the bike not the person, has had an ethereal autosol glow about him.  This troubled his €50 2-wheeled understudy, let’s call him Peter, who had thought it was his time to shine.  Many’s the pilgrimage our Peter has made to the CX Pits, and despite his willingness, only rarely has he been called upon, and only as long as Alan was readied for action again. 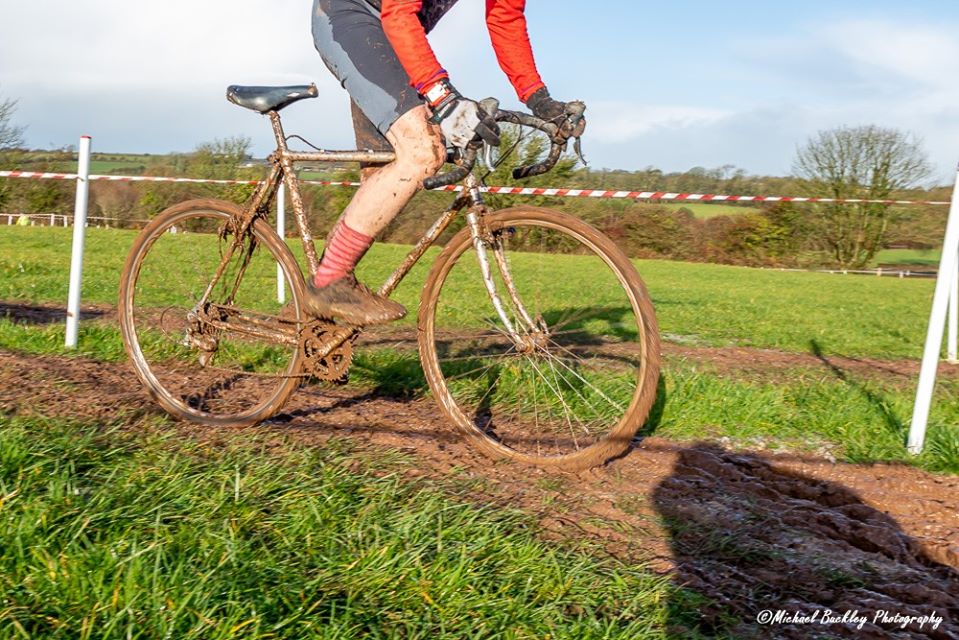 ‘Peter’ really thought his time had come with Alan’s demise , but to no avail.  It was all about the resurrection at Watergrasshill.  Alan so beguiled, that he dragged half a tonne of muck around the track five times instead of doing what the wisemen and women do, take the helping hand and at least get the benefit of a mud-free-lighter-bike-lap.  Thank you for offering, De Ronde’s David Scannell. 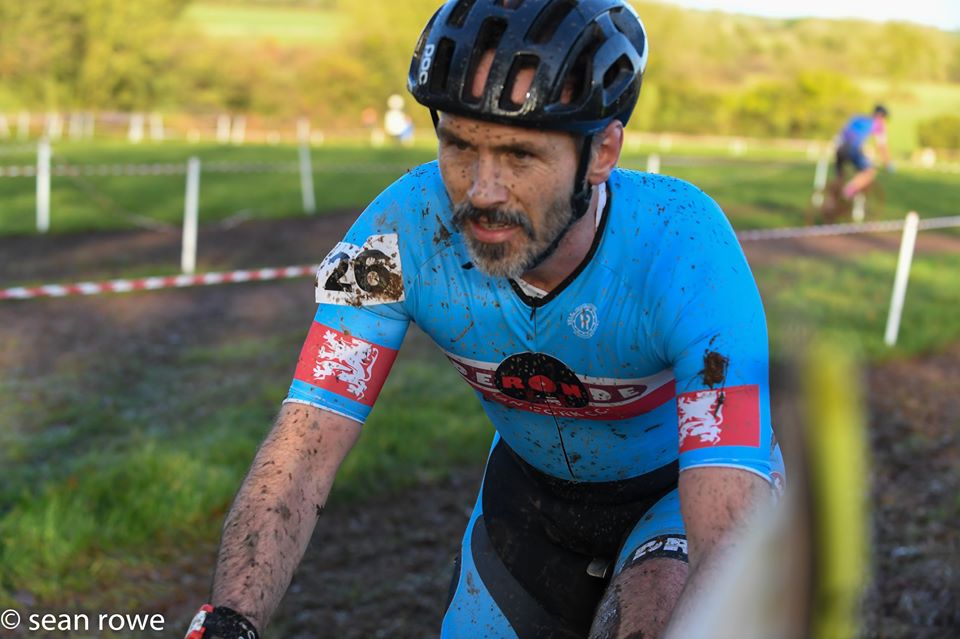 Alan’s luck surely can’t last, but sure enough he had enjoyed more of it yesterday.  Just as Peter was abandoned at the pits, after the event Alan was left behind at the watery gates.  Eventually when the time came to collect, there was Alan all gleaming.  Who would do such a thing, wash another man’s mud, it could only be Ballindenisk Faeries (or if not, maybe you Dave Baily?). 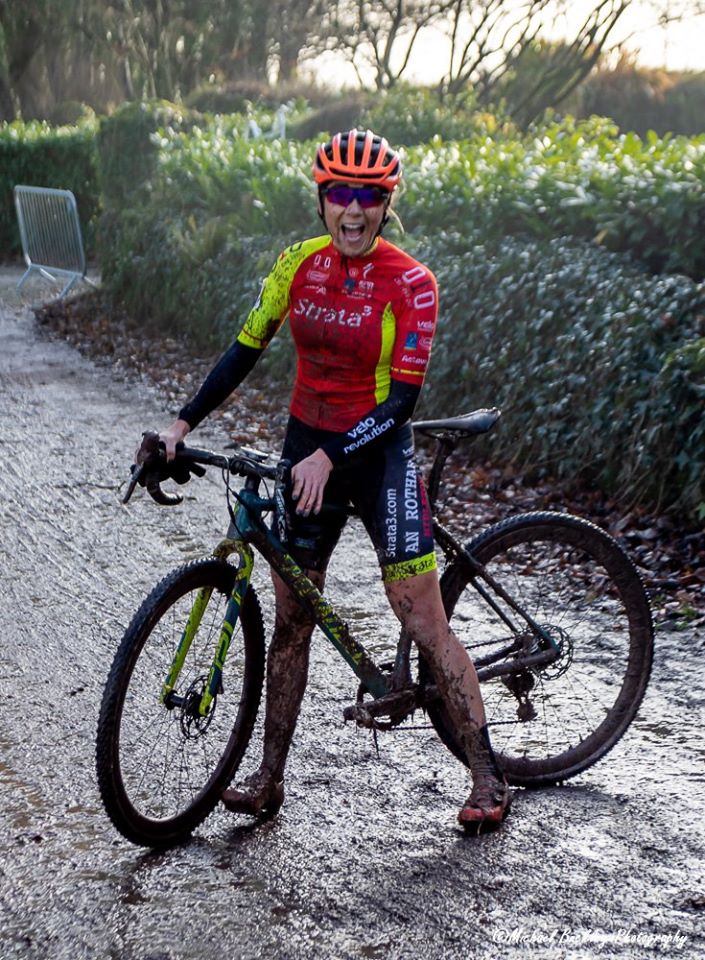 The next washers-up I spied were no lightweights.  For there, to my amaze, were the two most recently crowned Munster Champs, Richie Maes (mens) and Grace Young (ladies). Both had recently met with misfortune and ill-luck.  Now both were beaming. 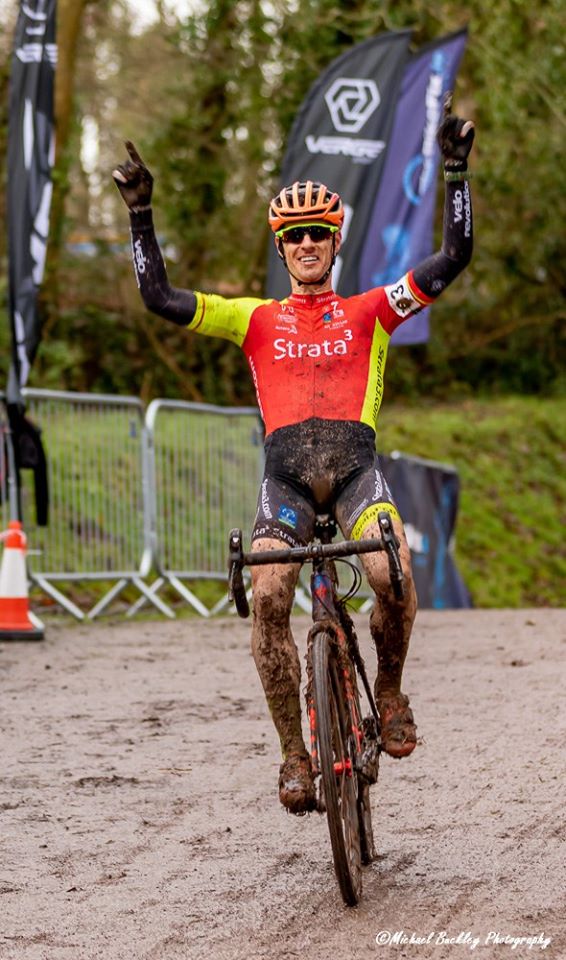 So too Patrick Clifford M40, Trevor Woods M50, Ruairi Coughlan Junior all first in their categories and Michael O’Loughlin, Richard Barry,  Lisa Stapelbroek and Aggie Wozniak, the runners up. Full results at https://belgianproject.cc/2019/12/09/the-provincial-cx-championships-2019-part-2-results-of-the-munster-champs-promoted-by-over-the-hill-cc-co-cork-on-sunday-8th-november/?fbclid=IwAR2yfYRylkaViJURBX5wcsyhW_cSoIDx_50mED21bZFtc8uFPdywlXlo56k 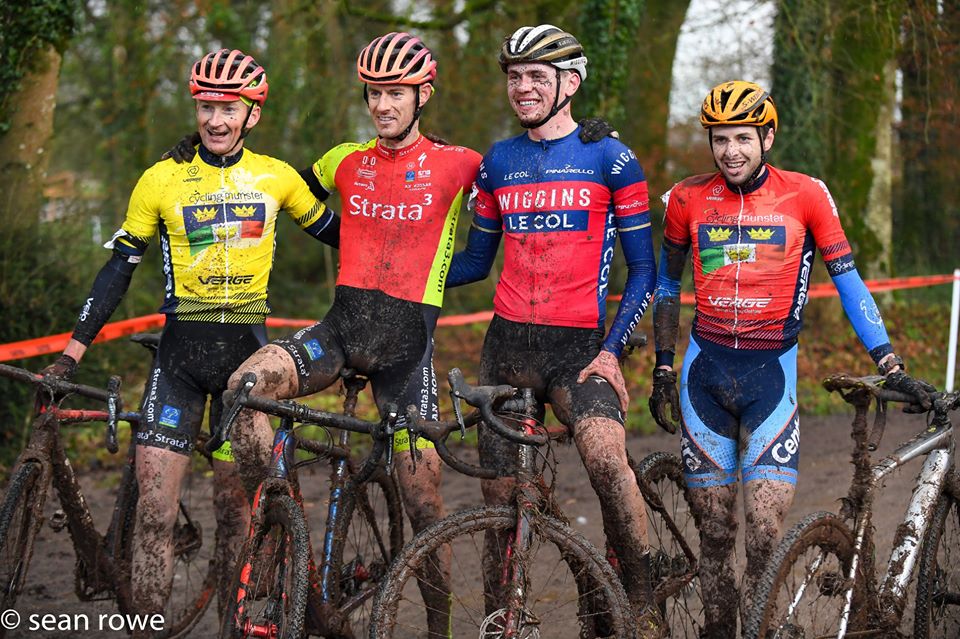 What of it all, these mud-packed wet Sundays? Don’t judge it all by one day.  Whatsapp mid-week:

“BTW, MCTC are 12th in Team standing …not saying nothing, but…”. 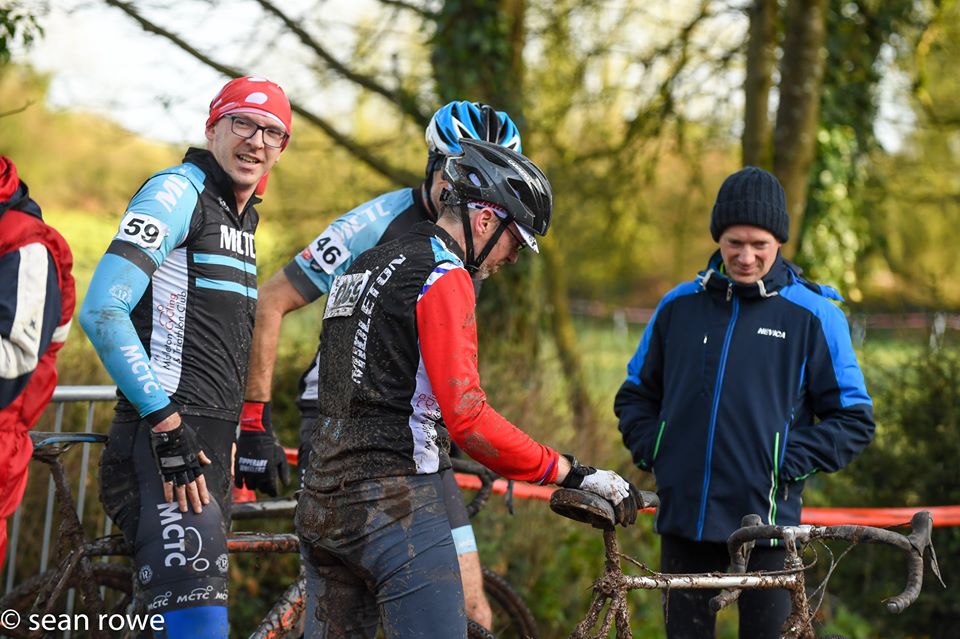 But what?  Camaraderie that’s what.  Thanks to the Munster CX League all riders contribute to their team’s place.  Even just finishing makes you part of the effort.  Top teams have the top riders, but even then, there’s something about “top-ten” that makes you want to compete.   Come on Cian. Power on Peter.  Drive on David.  AJ one more lap for MCTC! 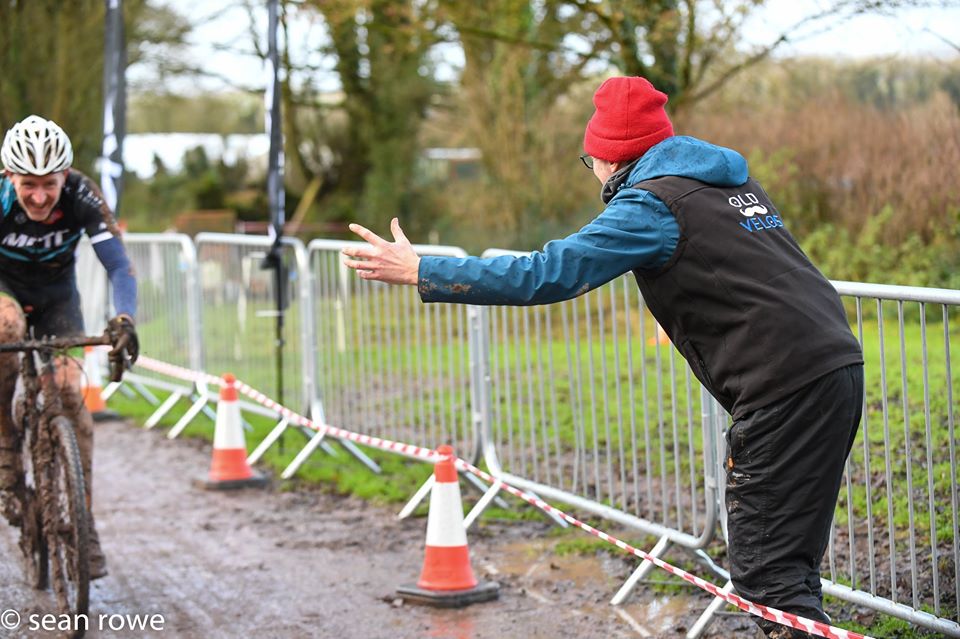 So thank you Over the Hill CC.  Running a cyclocross event at beautiful Ballindenisk Equestrian centre was a brainwave borne out of community and common sense.  If riders ride horses, why shouldn’t cyclists ride bikes?  Add to that a safe place away from the forecast Storm Atiyah. So a big thank you also to the owners and managers there, especially for the comedy value of throwing in a shooting range.  A welly wearing wax jacketed shooter soothed us with the words “as long as I know these lads even if you were on the range they’d still miss you.  Ye’re not on the range are ye?”.  By lap 5 I thought a wayward shot would be an act of charity. 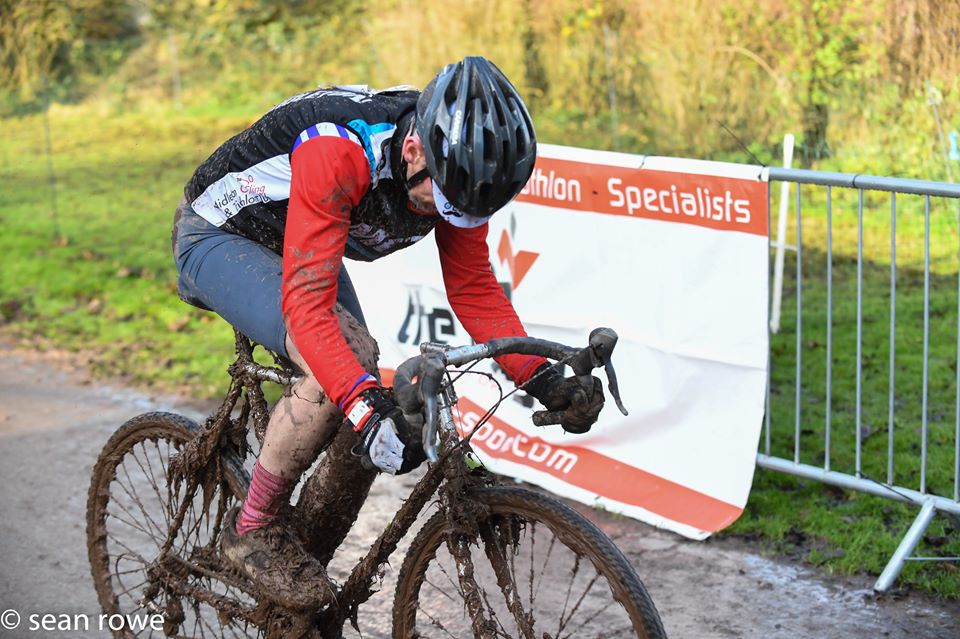