OldVelos don’t have race legal TT bikes, or any modern bike, but you’ll be glad you brought yours as you enjoy the next 10 miles of terrain. 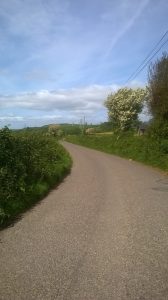 Miles 20-22½: You’re now heading for Cloyne, Cork’s hurling heartland, on roads best described as agricultural.   From Cloyne comes some of Cork’s sporting heroes, on and off their famous GAA field:  Christy Ring, there isn’t a sporting table quiz where he remains anonymous; Diarmuid ‘the Rock’ O’Sullivan; and Donal Óg Cusack, who’s progressed our games far beyond the goalmouth. 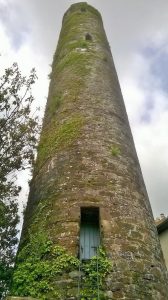 Following a final route change, you now turn left in Cloyne instead of riding straight ahead to Whitewell Cross. This change gives you a glimpse of Cloyne’s Round Tower and the promise of 5 miles interesting riding.  Cloyne is a proud, confident village.  It’s not showy though.  Imagine all the places in the world which, if they had a perfect round tower from the 10th Century, would have a theme park to promote it.  Not Cloyne.  No need.  Just a plaque:  The Round Tower of Cloyne.  Built 10th Century. Height 100 Feet. 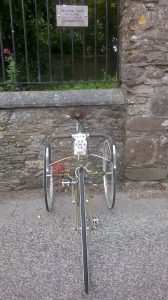 Lay the tower on its side and you’d be already outside the village on Church Road, heading straight towards the junction for Kilboy Football pitch.  Kilboy is home of Churchvilla FC, some beautiful stone walls and a stiff little climb towards the townland of Carraiglusky. 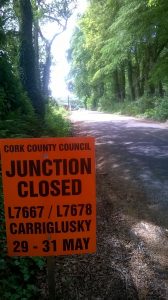 Our placename website, Logainme.ie, is silent on the meaning of ‘Loiscthe’, I suspect a derivative of uisce or water, but the rock –carraig – of  Carraiglusky where you are about to arrive will resound with the screeching of brakes as athletes drop down to a sharp right hand turn.  Expect a wall of marshals to direct you on to the next 2 miles of beautiful straight. 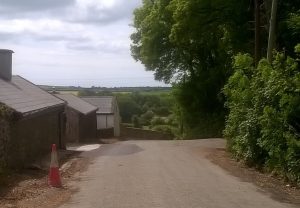 Miles 22½ -25:  The organisers’ motivation for this route change was to ensure athletes could confidently use their TT bikes.  It’s surely only coincidental that at close to the half-way mark of the cycle route that riders glimpse not one, but two windmills. A  portent of things to come as modern machinery whirrs amongst Cork’s farming heartland.  The similarity that struck me however was how the blades turned very much in the strong confident way that Ironman athletes turn their cranks. 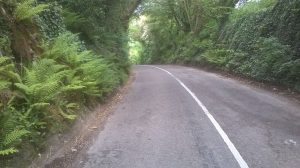 There’s a chance you will be met on this westward stretch with the wind on your nose, but between the high ditches you will get some respite.  Your 2 miles complete, you will drop to a tricky right, best taken by staying right.  Slightly scary too is the dark arch of green you are about to climb up to.  It’s only a short stretch, but enough to drop a centigrade or two and reminiscent of the set of a fantasy film. 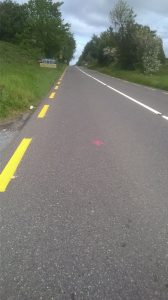 Miles 25-27:  After the sci-fi scene you’ll be motivated to make good ground when the marshal shouts ‘clear’ and you swing right to the smooth tarmac of the Whitegate – Midleton road.  These roads are smoothed by bulk oil containers, and while your enjoyment will be temporarily interrupted at Saleen it’s now’s the time to agree ‘yes, 54×11 was the right choice of top gear’. 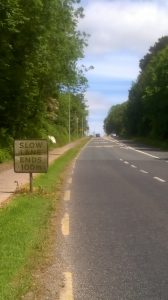 Enjoy the undeniably fast descent into Saleen – Sailín, a little inlet – and home to a church called after the ‘Mother of God’, which onlookers might just hear you say as you spy Saleen Hill rising in front of you.  Time for your 11-tooth cog to take a nap.  If I had started with the history of Saleen I’d be afraid you wouldn’t look-up, but now that you’re listening Saleen is a hamlet which grew between the neighbouring estates of Rostellan, Castlemary and Jamesbrook, all dating to the 17th century.  The rather reduced Jamesbrook is all that remains, the others lost to civil unrest. 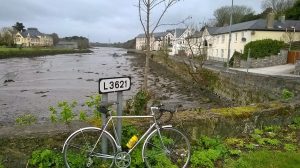 Miles 27-30:  From the top of Saleen Hill you’re going to dash down to Bawnard Cross where you’ll get up and over the dip without noticing.   Nor will you have known it was along a stretch of lane to the left that two coastguard men lost their lives in 1921 as a reprisal to the Battle of Clonmult.  More of that when you leave Midleton.  Soon you’ll be coming to Ballinacurra, a coastal village split by the good road you now enjoy, when you swing left I ask you to think of your ancestors.  It was from these quays that famine time passengers embarked toward emigration. 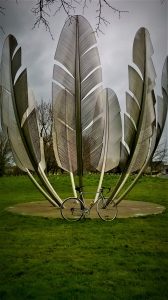 The authorities didn’t hold much for the meager Irishman then and you’ll soon think the same as you curse the sleeping policemen that come between you and your 110psi inflated tyres.  Feel peace however, when you glance to your left and witness the kindness of the human spirit.  The beautiful metal sculpture of feathers are a modern reminder of the generosity of the Choctaw nation who aided our ancestors in 1847.

The collection of OldVelos Ironman blogs will soon be available as a Route Companion booklet on www.OldVelos.com.  Order your advance copy using the contact form located here. Cost €10 (incl. P&P).