The Irish writer Brendan Behan once said, “I saw a notice which said, ‘Drink Canada Dry’ so I started”.  Similarly, my own weakness was exposed when the Limerick lads training on the Ironman Ireland Route shouted “Go Tri”.  They were, in fact, referring to their home triathlon club, and not encouraging me on my journey for today’s route recce, but go tri-cycling I did.

A tricycle has many advantages over the descendants of the ‘safety’ most of you ride.   I needn’t dismount for photos, nor balance for videography.  Map reading becomes charming and not a chore when surveying the scene from your saddle.  There are a few drawbacks however, like jack-knifing, which one of the Shannonside lads discovered when he took it for a test run at the end of today’s recce at Ballymaloe House.  Let’s just say owner Darina is down a few daffodils, but heh, I’m up a few friends following a sociable ride as I encountered more triathletes on these roads.

Today’s recce brings us from outside Ballymacoda and along the coast road all the way to Cloyne.  Despite being a native, this was virgin territory for me, and so all the tricycle’s advantages were employed.  We are starting at mile 7.5, by a homemade Ironman road-sign and your first real climb.

The long drag through the townland of Ballyferode passes some beguiling homes and farmsteads.  Spring was in the air and not being capable of doing anything in a hurry I took in the season’s vibrant colours, set off by the mute lichen covered ruins I passed on either side.  Mute too are the ancestors from these homes and as I climbed I recalled why Ireland has just so many of these backroads.  The population of the County of Cork was once twice what it is now, with over 850’000 souls in pre-famine times.  These families had homes, and roads, and schools, as I would soon discover.

It’s little hills like that at Ballyferode that pose the question for many of you, ‘tri bike or road racer?’.  While this hill won’t decide your choice, the descents later on might.  On road surface I am forever trying to reassure, but when I doubt my choice I remember that, despite competitors, you will be riding traffic free roads.  Often the crown of these country roads are blemish free, pot holes more resolutely in the gutter.  Tricyclists fear camber as much as craters, but here, on both counts, I found it to be fairly fault free.

These musing brought me to the top of the hill, but it was what I spied a little later to my right that made me turn around and stop.  A cluster of small buildings, a farmstead, courtyard and an abandoned school.  A school?  These oft-empty buildings are found the length and breadth of Ireland. They have 3 distinctive characteristics.  A chimney on either end of the building, a porch in the centre with 2 doors and a limestone name plate.  Did the pre-emigrant children of those deserted houses below once line-up, juniors and seniors each to their own door, with satchels and some some turf for the fire?

“Juniors, seniors, first and second class on the top room near the road and the rest in lower room. Open fires and outside toilets!”, one local told me.   What my correspondent did not know was St. Modomnoc, after whose church the school is named, is credited for bringing bees to Ireland in the 6th Century.   The bees will hopefully be buzzing in June 2019, as too will Zipp wheels between these ancient fields.

You are now on 2 miles of undulating and winding roads, made for your enjoyment, and tribars.  As soon as you see the sea though, you might want to bring your hands to the bull horns and open up your shoulders for the next descent.  One, from memory, is a tricky right hander followed by a short sharp shock bend on the left.  Next comes (at mile 10) a straight drop, keep central as the road narrows as you reach max speed.   No doubt marshalls will be there to guide you, you will be keeping to their right.

Soon after we’re dinking down to the sea on to the straight road to Garryvoe.  Many of you will be staying there, maybe even swim in the sea or in the famous hotel.  The ocean is on your left, and so too Ballycotton’s black lighthouse but let that just be a distraction over your shoulder.  As I careered around the corner in Garryvoe I thought to myself I better warn you about that too.

What else might you want to know about miles 16-20?   These are mainly flat, fast miles, there are some heights and plenty of history.  The two and half miles between Garryvoe and Shanagarry are not necessarily remarkable so best use these following flat corners to concentrate, relax and find your rhythm.  Not to do so would be a waste of the previous 15 miles effort and the time-making miles to come.

If you seek it, distraction here comes in two forms, the beautiful name of Shanagarry and, surprisingly, a sign for Kilkenny.  Shanagarry, ‘the old fields’, reminds us that the Irish language has as many names for fields as the Inuit have for snow.  Garraí, Gort, Curragh, Páirc Faiche…the list goes on.  Our second distraction might make you wonder where in the hell you’ve just been, as you pass a big sign for Kilkenny.  A shop from the Marble City that made a home in the Rebel County, and well worth a visit the day before or after… I say without yet receiving a gratuity.  Don’t worry too much about this on the day, as the drop on the good road into ‘Shan’ sets you up for the road to Garryvoe.

You are truly in foodie territory now.  Three miles of large farm fields, and if you see them making hay, well so should you.  This is the land of Ballymaloe, famous for its ‘farm to fork’ ethic, eatery, shops and grounds.  As you leave ‘Shan’ towards Ballymaloe take some respite in the shelter of the larger walls and hedges, you’ll notice them when they’re gone.  As you approach Ballymaloe’s tradesmen’s entrance you’ll encounter a left hand turn as tasty as their famous relish, miss it and you’ll be given a job!  Ballymaloe was also home to a bunch of daffodils, but the Shannonsiders dealt with that!  They were last seen heading for Cloyne.

⇒  One thing not to do here – don’t drop energy gels, protein bars or goodness knows what. This area is also home to Ireland’s growing wake of Buzzards, they’ll be as high as Kites if they scavenge that stuff (one for the ornithologists there!). 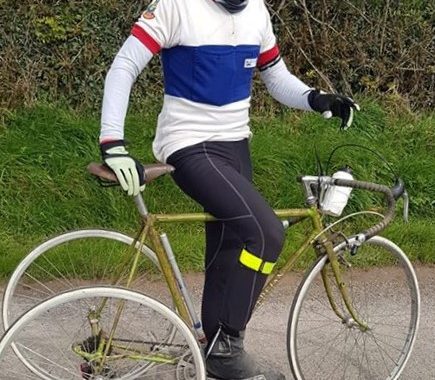 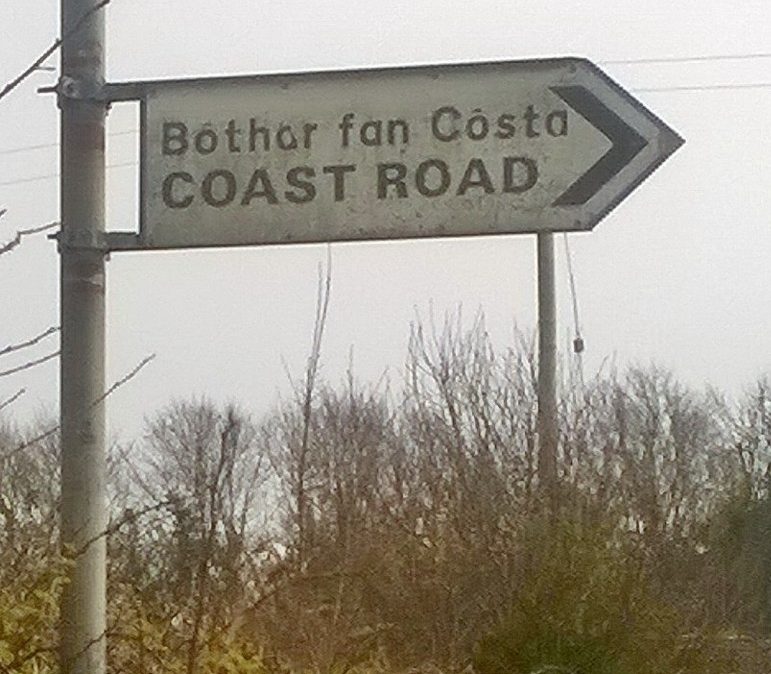 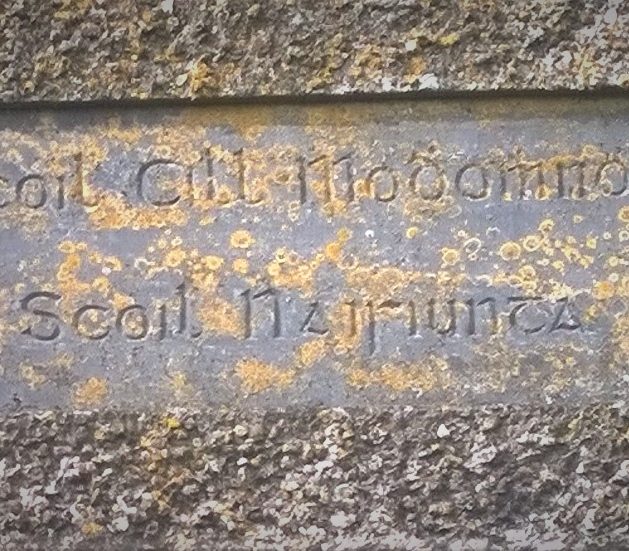 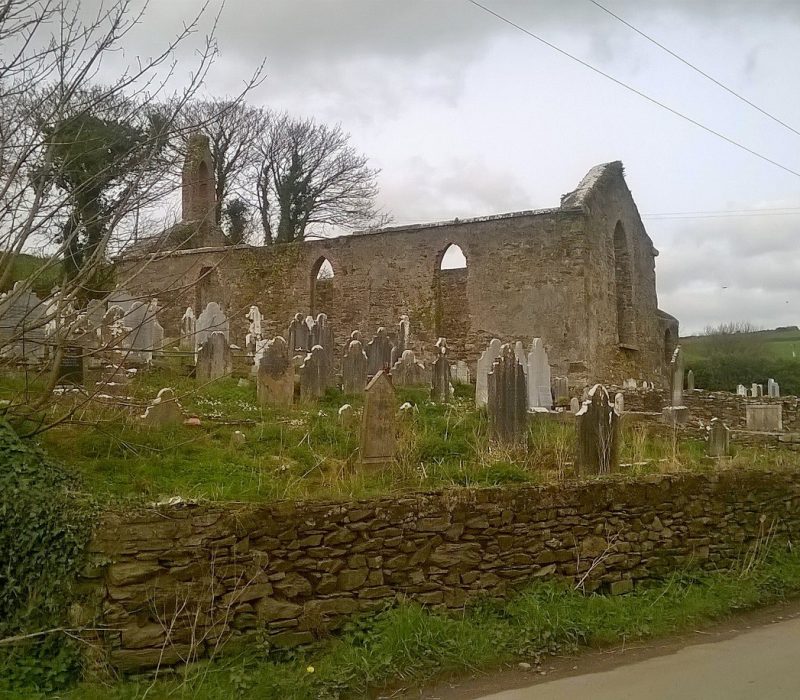 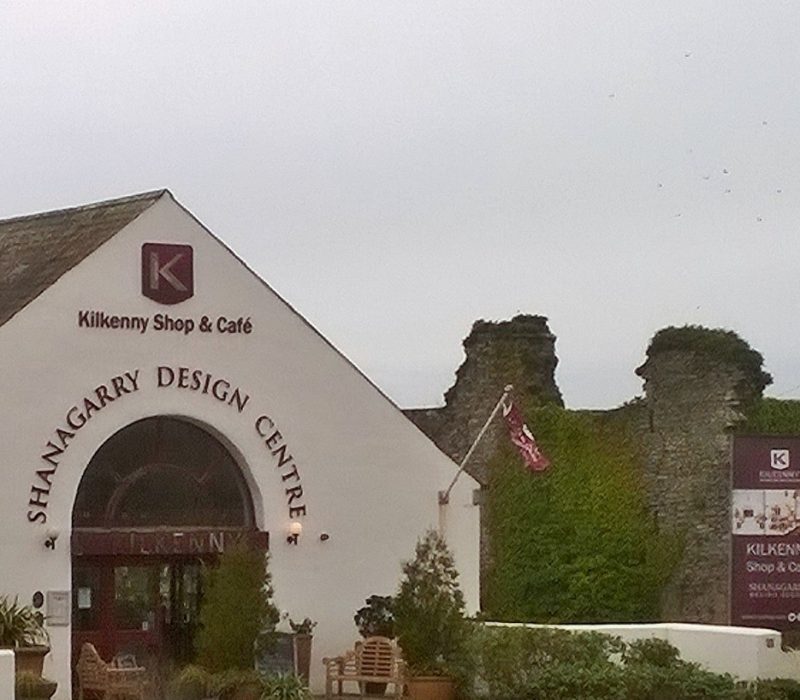 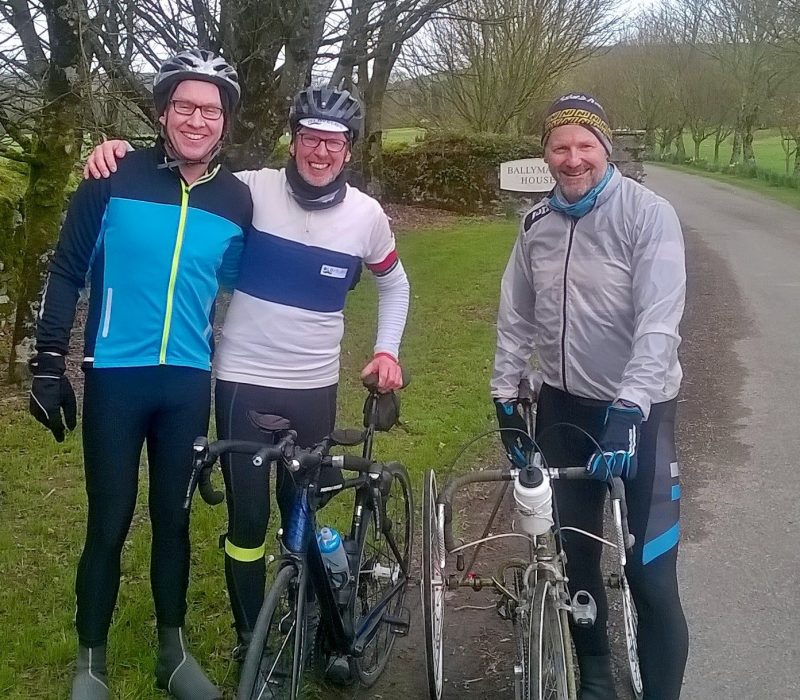