A bridge too far ! 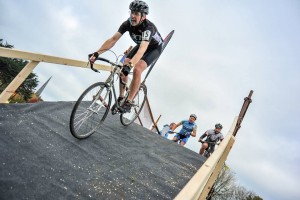 Are you winning Dad?

Pi Cx Race organiser and occasional OldVelo Paul Birchall held tight to the microphone as he stood in front of the line of racers.  “Be kind to each other on the first corners” he implored and began the countdown.  It must have been in the time it took him to get from the number ‘one’ and the word ‘go’ that he realised that he was looking straight down the loaded barrel of 50 blood thirsty B-racers.  Too late.  Poor Paul Birchall, run over in his own race by a choice of knobbly cyclocross tyres and, god help him, there were mountain bikes too.

Had he perished Paul might have said this was a bridge too far.  But he didn’t.  Like the Mary McAleese of Mallow he had gone about his bridge building in advance, ringing around all the local hardware merchants looking for 3 sheets of ply and a load of roofing felt.  Well it’s that or there’s somebody looking out at their back garden where their shed used be.   That garden shed isn’t the only thing that went missing in the pursuit of the perfect CX track in Mallow. Paul also used his authority with the authorities and the town park has been denuded of some of its forest. Paul came and saw it seemed.

B-race or not, it was a long time since I was first over the line and I loved the feeling.  The looks you get, the excitement, clipping out of your pedals, commending your fellow competitors.  Yes, I had come to the beginning of the race from the wrong direction so ended up at the front of the start line.  This was a serious place to be as the cyclist to my left would later lift his hands aloft and beam crossing the finishing line first from the right direction.  Right now, as Paul commenced his own personal countdown, all I wanted to do was to ride my own race.

And it started badly.  My mistake it seemed, as everyone sped past me, was not clipping into my SPD pedals in advance.  Not only did I have a new bike (to me) but new shoes too.  ‘Very comfortable’ the online review informed me after my purchase, ‘great grip’ it said, ‘sometimes hard to clip in’ it added.  How true I thought, click clacking along like a debutant in their first high-heels.  No sooner was I clipped in but my phalanx of chaperones decided I really should be helped around the 145 degree corner.  All believing in each other’s ability it’s a wonder we didn’t come a cropper.  But that didn’t take long.

First though Paul wanted to show us something.  Paul was very proud of his bridge, maybe he had bridge envy in the past. So proud of Birchall Bridge was he that he made sure we all had a good look at it in advance.  First look was of the bridge’s steep descent and how it completely didn’t camber onto the soft ground below, perhaps it was the race speed that was exaggerating the precipice?  Paul assured us ‘no’ by driving us under his bridge’s lofty arch with the soothing sight of hay bales supporting the infrastructure.  Had he wanted to he could have driven us through on a double decker so high was this viaduct.  Race speed recommenced and just one portion of our minds was left to entertain what we had just seen – that bit of your brain which says ‘nah that didn’t happen’.

Our minds soon had other things to think about – a steep drop which when taken wrong introduced one to the River Blackwater.  Then a quick fumble of the front derailleur and up an embankment.  Alas the Viscount of Kanturk was dismounted here and the inevitable ‘coming a cropper’ occurred.  SPD pedals spat out their incumbents and the heave and cacophony of bikes avoided, carried, pushed and pulled ensued.  Poor Viscount, a trailing knee met with his calf and it was curtains for him.  The rest carried on.  Another steep plummet down to some refined architecture and hay bales and again a riverside jaunt, further embankment and some solace away from madding crowd.  Only to be followed by more architecture, but less beautiful, a wall.  Off the bike again one, well me, offered the bike back up to the townpark like a parent raising its most loved child aloft to a rescue boat.   I was always nearly ready to sink back down… but the famous bridge beckoned.

The night before departure I had sat down my son and his friend in front of YouTube and talked up the excitement of cyclocross. 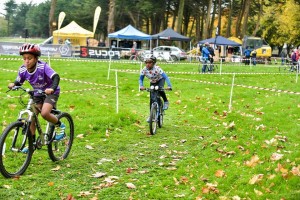 Surely there’d be some mad video that would inspire them and turn tomorrow’s four lap children’s course breeze into a tornado of excitement.  Cometh the hour cometh the three minute viral video.  Be it Danny Madskill, a BMX extravaganza or a GCN video with some super pro I had never heard of talking up the technique of bridge climbing.  As If I’d ever need those skills.  His words came tumbling back.  Full power approaching the ramp, fuller power cresting the top, say thanks to the guys who ensure you make it over safely (ok he didn’t say that but I did) and finally sit back over the back wheel when descending.  I remembered that last bit for every other lap after my first plunge when my hanging jaw nearly met with a fast approaching stem. Ouch!

My scream was silent, silent enough to listen to the sounds of my new old bike.  I had taken possession of a rather tatty 1981 Guerricotti the week before and stripping it down to its original Aluminium with copious amount of brandy..I mean Brasso … a brand new Alan was reborn.   These bikes have pedigree, amongst the first of the bonded Aluminium frames these Italian frames have taken 20 word titles.  Moreover they are very forgiving and indeed the bike absolved me six or seven more bridge drops.  And each time we touched the turf I could hear it exclaim ‘another two Hail Marys and a glory be for you son’.

It actually took 3 decades of the rosary to complete the rest of the lap.  But that doesn’t include the time it took me to unclip and horse bike and I over the two 5 foot (wide) planks that littered this stretch, nor the time I lost a Hail Mary and my grip on the slippery grass as we approached the woods.  Nor the time I nearly lost my way on the course as I spied the track from above my reading glasses.  Oh yes, that was me putting the B-spectacled into the B race.  But what I couldn’t see didn’t stop me from hearing what encouraged me on every lap. “Are you winning Dad? Are you winning?”  Well there’s only one answer to that and I’d like to thank Paul, Pi Bicycles, the Revolution Cycling Club and all the volunteers associated with the Pi CX race and all the others Munster CX league races for the answer.  “Yes son, I’m winning my race”.