Below is John Piggott’s review of the VIC. Alan Cowzer also has an interesting prespective on the event on his website at this location: http://www.cowzer.com/cfx10/oldvelos-vintage-international-classic.php

They say nostalgia isn’t what it used to be but involvement in an Oldvelos cycling event must surely disprove that rule or be the exception to prove it true.

My first mistake in the matter of retro cycling and cyclists was to allow Brendan Hennessy to talk me into participating in l’Eroica, an event run by mad Italians in their beautiful but crazy country for old men on old bikes on old roads. It was, without doubt or hyperbolae, the toughest but the best cycling sportive event I’ve ever been lucky enough to take part in. I had naively believed it was to be a one-off, once-in-a-lifetime trip down cycling history’s memory lane. Brendan had other ideas.  In the meantime there’s been at least five Irish vintage events, all modelled on this classic bikefest, and each seems to surpass the last in both scale and enthusiasm.  The Oldvelos tribute to The Nissan International Classic was the boldest, brightest and most successful venture so far and, God help us all, it looks like there will be no stopping them now, especially since Brendan teamed up with the even-more-eccentric-than-Brendan Alec Darragh and the no-nonsense Ger McCarthy.

Bicycle nostalgia, it seems, is now to be engendered and extended beyond cyclists and is effecting sensible business people like David Randles of Randles Bros Nissan in Killarney who sponsored the event.  Mr Randles very foolishly allowed Messrs Hennessy, Darragh and McCarthy, to overrun his car showrooms for the weekend, putting rusty old bicycles (I jest) where shiny new motorcars ought to be. It seems this moment of weakness on Mr Randles’ part conferred sufficient credibility on Oldvelos to persuade the venerable Mr. Alan Rushton, race oraganiser of the actual aforementioned Nissan Classic, to not only attend the event but to endorse it and agree to judge the entries in the Concourse d’Elegance event that was held on the eve of the cycle itself. He reminded us, among other things, that ‘The Nissan’ was part of a huge publicity drive to rebrand Datsun cars as ‘Nissan’.

The judging of the bicycles entered into the ‘concourse’ event proved to be a task that probably needed a man of Mr. Rushton’s standing and experience, for the quality of the entries thereto was nothing short of outstanding, featuring as it did, at least two Rás – winning bikes belonging to no lesser luminaries than Stephen Roche and Gene Mangan. The winning entry was a stunning Super-Vitus in full Kas livery, a sparkling tribute to the great Sean Kelly but it had to beat off some genuinely fierce competition from equally beautiful and historic machines. The winner, Barry Mooney temporarily swapped his highly appropriate, vintage Skil jersey for the winner’s prize, a totally authentic and much-coveted Nissan Classic Yellow Jersey, the last unopened specimen of its kind. Barry was presented with it on the morning of the event proper, and wore it with pride for the entire day … and night …in fact he was still wearing it at breakfast the next morning. 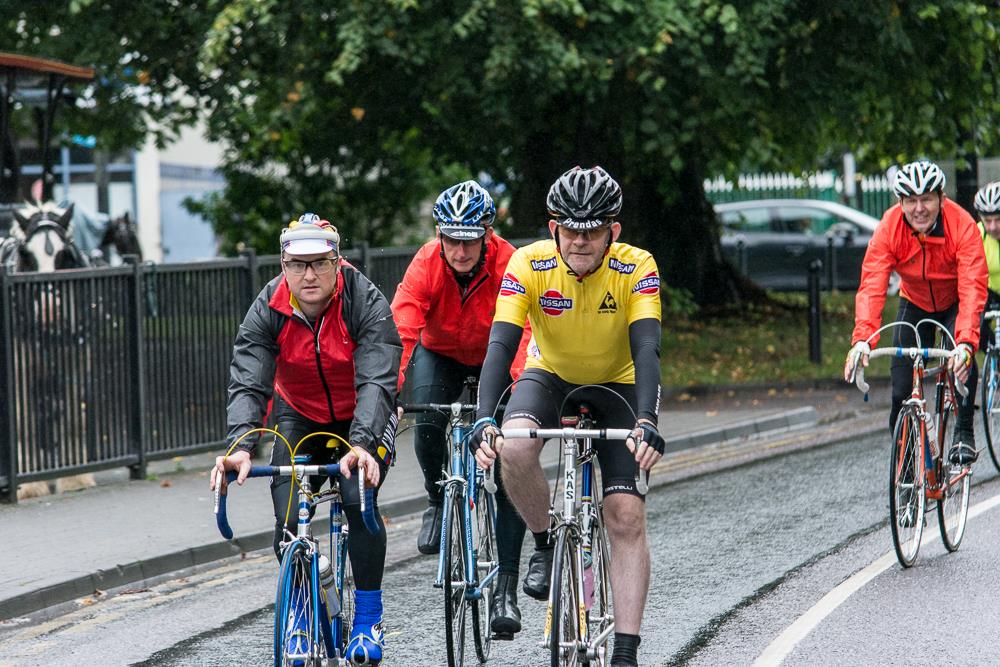 Among some of the many fascinating articles on display in Randles Nissan that morning, I found an old press cutting about a legend of Irish Cycling I’d previously never heard of, one Mick Murphy, the ‘Iron Man’ of Irish cycling. No sooner had I learned something of this incredible (I mean incredible – his life was literally unbelievable) character than I heard he’d died suddenly, just the day before the Oldvelos event.  Brendan had made it known he wanted the grand old gent, who lived in nearby Cahirsiveen, to attend. Seems Mick had more sense than the rest of us. Joking aside – God rest you, Mick Murphy and R.I.P. In case, like me, you haven’t yet read the amazing book ‘The Rás’ by Tom Daly get it and find out about fascinating characters like Mick and why, when asked what it felt like to have won the ‘Triple Crown’ of cycling, that only Merckx  had done previously,  Roche could only answer ‘Ahhh, but he never won The Rás’!

Back to the events of Sept. 12th and 13th. Having dined well (a little too well perhaps) the night before, roundly regaled as we had been by the endlessly fascinating anecdotes of our truly amiable guest of honour, Mr. Rushton, who had lived the events to which all our efforts were to be a mere homage, we set about getting almost all those lovely antiques out of the showroom and out on the roads of Killarney. Riders could choose a 60 mile or a 75mile route. Hills were to be mandatory, steep and plentiful. As with virtually all events organized by Brendan Hennessy, the weather was to be … authentic. And so it was. We started in a shower. It soon became a drizzle and then it started raining. This was to be interrupted at various intervals by moments of downpour and the odd deluge. A mixed bag, you could say. Still. Nobody could say the weather was windy or cold. Any more than they could say it was pleasant.

All of which had absolutely no bearing on the general mood which was buoyant and friendly to a man. One of our crew, (his name escapes me but he’ll recognize himself as ‘Mr Eighteen-Tooth’, not because he’d lost half his teeth, but because he was riding that impossible course with an 18-tooth biggest sprocket – the swine!) noticing my suffering, chose to cheer me up with a quick course in positive thinking, an attitude I applaud, try to practice and even preach sometimes. I must remind myself to stop that for I was thinking so positively by the time we got to lunch I’d almost lost the will to live. I hadn’t though, and an excellent repast of hot tea, fresh sandwiches and sugary biscuits at the fireside of The Rowan Tree pub in Glencar soon had me ready to face the second half of that long day.

And despite our meteorological challenges and the quite despicable amount of climbing involved, it was impossible, almost wherever you drew breath (which happened a lot less often than this particular excuse for a cyclist would have liked!) not to gasp at the almost incredible beauty of the countryside we were traveling through. I’ve been in Killarney several times, I’ve even cycled there and I always kinda felt ‘hmmmmm, yeah, it’s alright but I can’t really see what all the fuss is about.’ The Oldvelos‘ run changed my mind about that.

The upside of the copious precipitation we all experienced to varying degrees of discomfort that day is the stunning array of waterscapes this unique corner of our beautiful land has to offer. The lakes get all the press for sure and there are lakes of all shapes and sizes, lakes above lakes upon lakes, but there are also rivers and streams and rivulets and cascades and weirs and waterfalls. And that’s just on the roads!   There is water moving at every conceivable rate from cascade to zero, around every bend, skirting the road for miles at a time. And every so often you wonder why there’s a truck roaring and thundering somewhere on the road, it must be behind you… but it isn’t. It’s just another mountain torrent tunnelling beneath your wheels as it charges down the hillside to make…lakes.  I don’t recall being so close to so much water and not being in a boat or a ship or wearing flippers. It was truly memorable. Sunshine might have been nice but you don’t go to Kerry for a suntan.

Almost as varied as the waterscapes were the riders involved, about fifty in all which might have been eighty had the weather been a little more clement. There was everything from old pros to rank amateurs. There was a South African who turned out on his pride and joy a 35lb Raleigh sports bike from the eighties. He wore a pair of sneakers, baggie shorts (no chamois) and .. a woolly cardigan. When the cardigan got too heavy, he dumped it and rode nearly the whole thing in just a tee-shirt. Another guy had to walk half the hills while Mr Eighteen Tooth could only grumble that his over-gearing meant he had to ride up the hills too fast. All sorts.

Funny thing about cycling, almost as soon as you start you’re thinking about finishing. ‘Are we there yet?’ There was no shortage of that. But the toughest cycles are always somehow the best in retrospect, preferably on the other side of a hot shower and a good meal (courtesy of the Dromhall Hotel), maybe a small sherry ( a friend of mine’s euphemism for a bucket-load of beer and a diving board!).  Through that lens, and any other you care to mention, the Oldvelos’ Vintage International Classic was a great event. And the mind blocks out painful memories so it’s possible, even probable, I’d do it again. Please.