Lines from the Fifth Province

“The Fifth Province is not anywhere here or there, north or south, east or west. It is a place within each one of us – that place that is open to the other, that swinging door which allows us to venture out and others to venture in.” – Mary Robinson, President of Ireland, 1990.

Queens and highkings, the provincial champions from Ireland’s four provinces, came to do battle in Sligo last Sunday.  Heroes by the name of Grace Young and Niamh McKiverigan, legends like Richie Maes, Anthony Murray and Chris McGlinchey were expected to stand and fall, dismount and remount, cycle and recycle until no one was left in the saddle at all. Except the National Champ.  The Master of All. 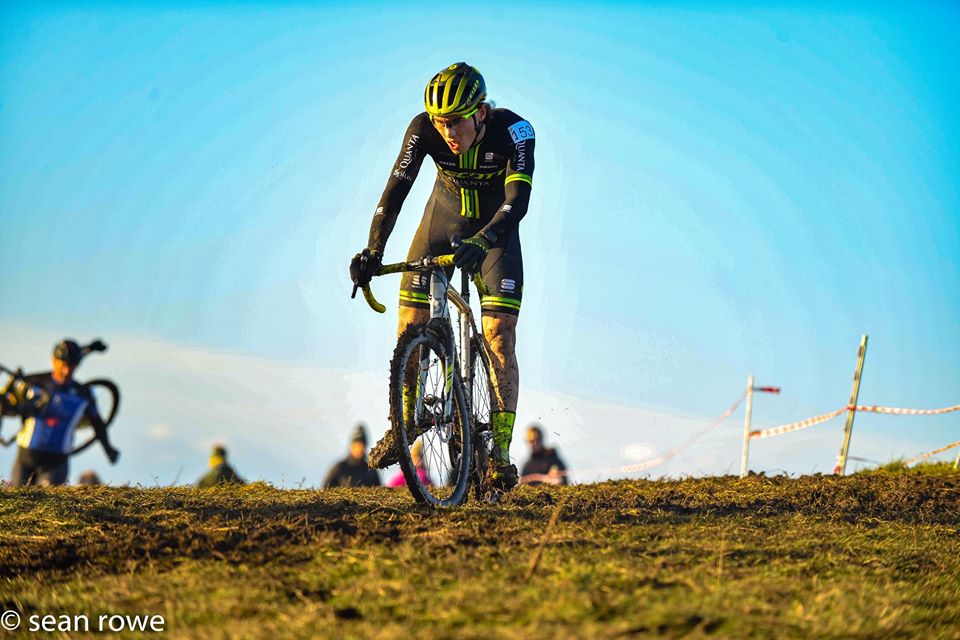 But all is never as it seems when it comes to Irish sagas.  Our current provincial champions will know, but may now regret, that each of their provinces written ‘as gaeilge’ (in Irish), contains the prefix ‘cúige’ or fifth.  Cúige Laighean for Gillespie and Nolan, Cúige Mumhan for Young and Maes, Cúige Uladh for McKiverigan and McGlinchey and Cúige Chonnacht for Murray.  No lady in Connaught?  Destiny would deal with that. 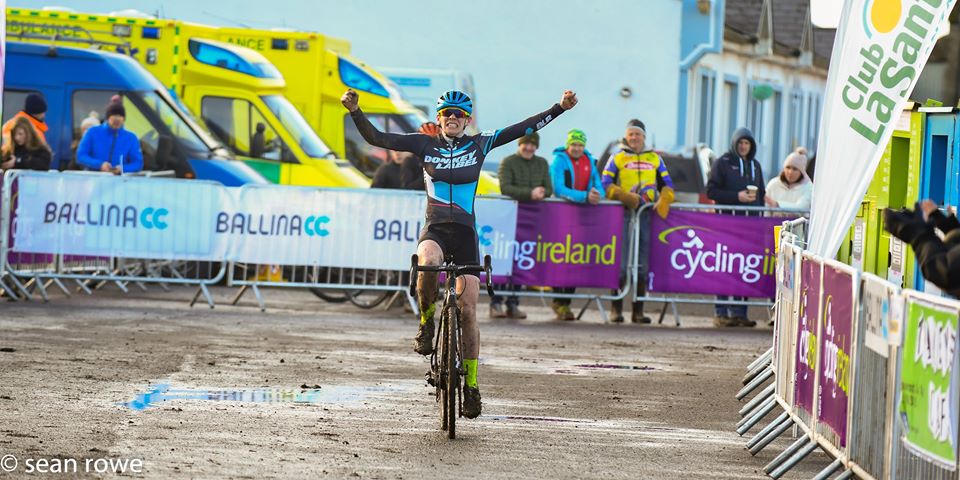 Among us were the legends, the champion warriors, women and men, of Leinster, Munster, Connaught and Ulster, but none of them won.  How can this be, is there a fifth province where our new national champions reside?

Our Champions this year were not present at the provincial races; yet they are very much Irish.  Our heroes of 2020 did not ride in Ireland, but they rode.  Our national champions come from, inhabit, hold dear and love the mud and muck of their homeland, but yet they have traveled, bunny hopped, fallen off and jumped back on different plains.  That plain is the fifth province of Irish cyclocross.

Míde, the fifth province of Irish mythology, encompassed the land, the sea, the air of all of Ireland. In the mist of time Míde was where highkings met, where Gods and Goddesses came to be seen, where great feats of physicality, strength and fortitude were dramatically beheld.  The fifth province takes its power not from its physical existence but draws on the strength of our forbearers and ancestors, sky gods and gods of land and sea.  A warrior from this space would cycle faster, disperse mud quicker, breath deeper than anyone else.  Míde does not mean mud in Irish, but I’m going to pretend it does. 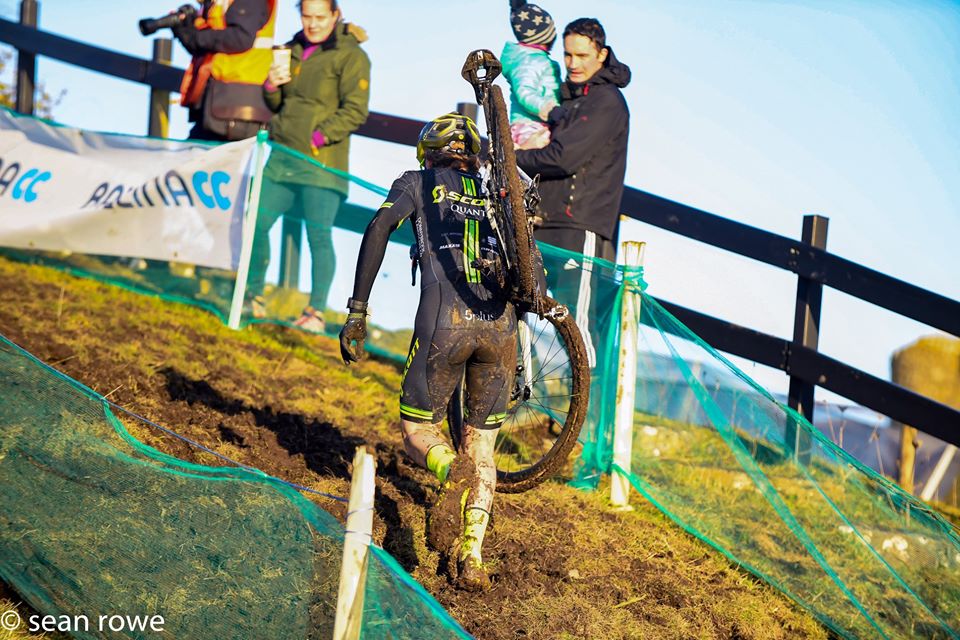 The mud stuck at the Irish National Championships.   To tyres and bottom brackets, to shoes and to legs.  The mud stuck it to the competitors, spoke to them, clawed at their efforts, jeered their ambition; “You want to be a National Champion? Prove it, go on prove it.  You want me to believe that you came from a mythical muddy place to conquer all? Show me why I’m wrong.” 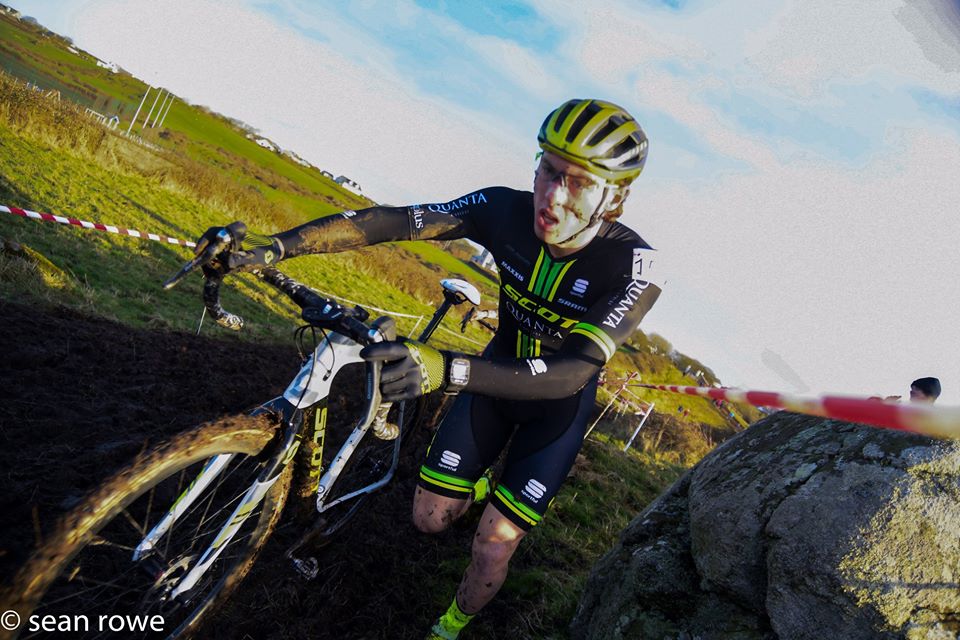 Maria Larkin, now Champion of Ireland and of Connaught, travelled time from West to East to capture her crown.  Not her first time to try mind, but mud loves a trier, and Maria loved the mud. Leading from the start, after her first lap she had 9 seconds to take breath, then 24, then more and more.  She built time while others rose and fell, although the time sheets suggest others, like Grace Young, fell and rose.  Grace was fourth from a bad start, ahead of her were Michelle Geoghan and Lucy O’Donnell.  2nd, 3rd and 4th from Munster, not bad, but Maria was not once behind the front, and came to the line with a minute and thirteen. Enough time to recognise the ground and salute the sky. Champion of Ireland, Queen of Connaught and some green to wear back to her adopted sweet home Chicago. 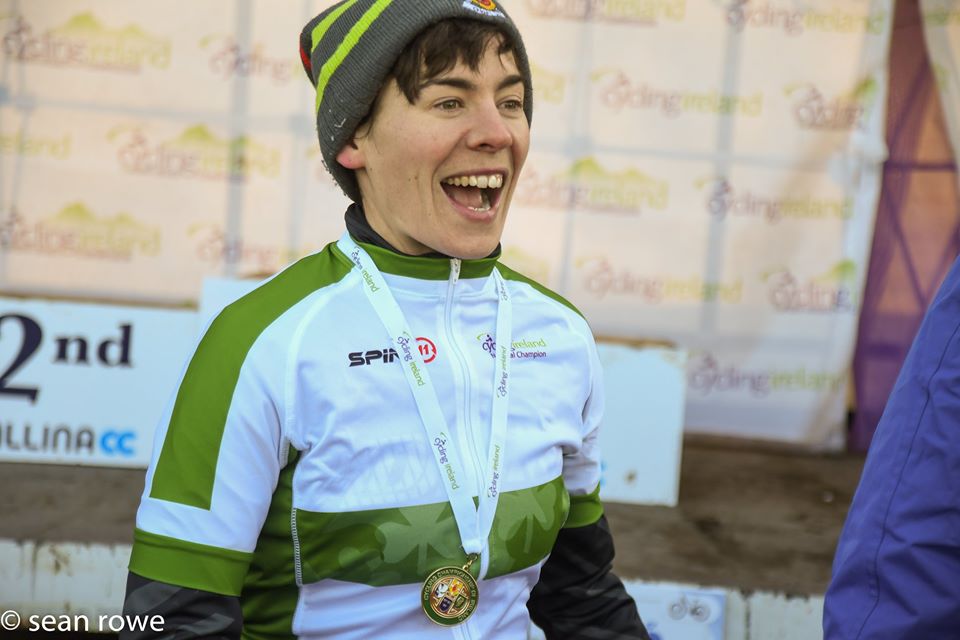 David Conroy had been here before.   He returned to Ireland from the European scene to win once more.  He had a crown to retain, not easy to achieve from many hungry rivals.  But hunger is a good sauce and David was not going to be the dish for the salivating pack.  They kept close though, forever biting at his heels.  His closest rival and provincial champ, Chris McGlinchey led him first lap, led him second, led him third and then something changed.  Was it the mud or the Míde? That extra something that comes from testing and being tested beyond our land and our shores. 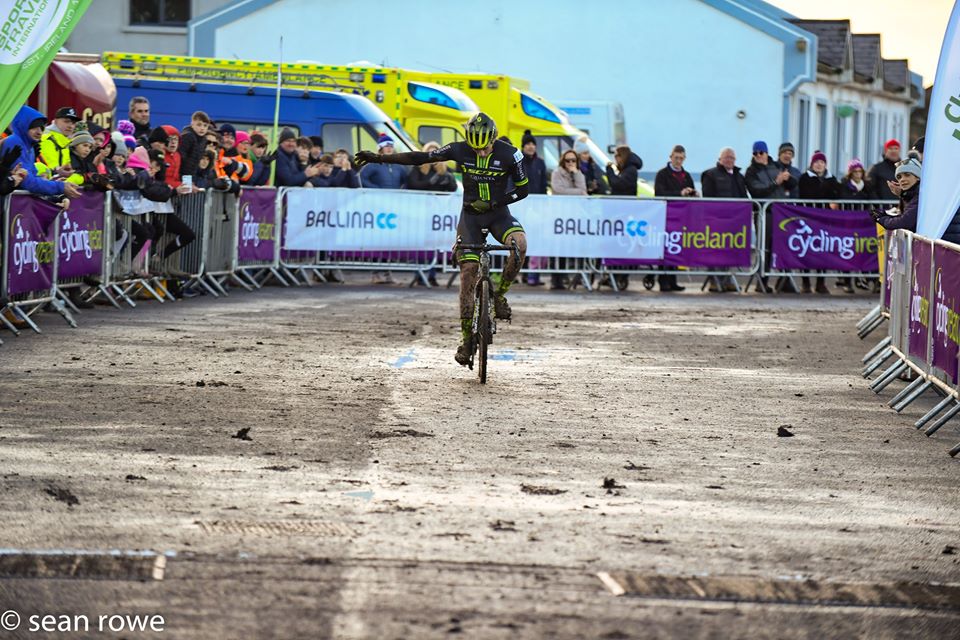 Conroy has been known to turn up in the lowlands, home of cyclocross, but now he was home, and his main rivals were all from his province, but he had something, something different, imperceptible but an edge and that , in the end, was 21 seconds over McGlinchey after the final lap. Three minutes later and third was Tom Creighton behind him fourth Darnell Moore before, in a fine ride, we had somebody not from Ulster, Richard Barry, Munster, 5th. 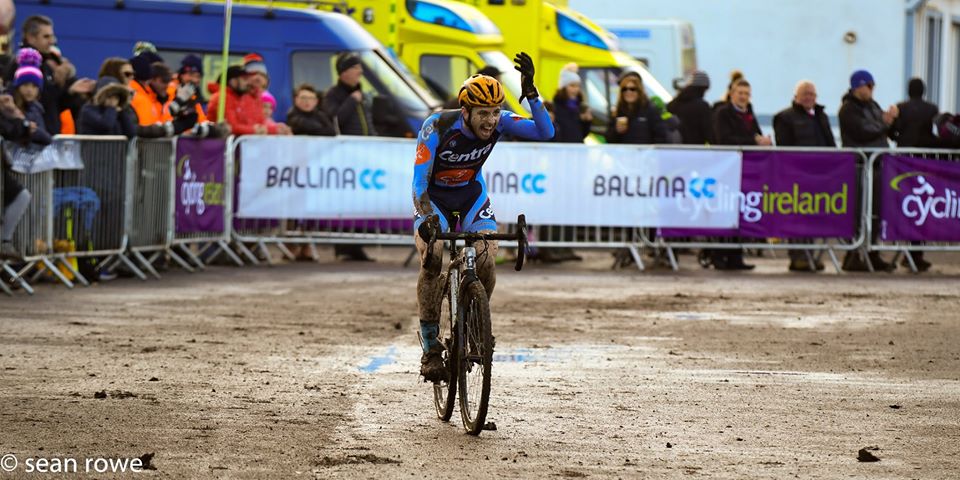 So concludes our cyclocross season, our battles, our laughs, our spills and our falls. Two elite champions, Maria Larkin and David Conroy, to cheer and to celebrate.  Many others too, junior girls and boys, underage kids and others more long in the tooth.  You’ll find their names here.  And when we return to our four-fifths of the country, let’s remember there’s a fifth we share, it’s what we’re all about.  As one medieval scribe put it:

Knowledge in the West,

Battle in the North,

Prosperity in the East,

Music in the South and

Kingship in the Centre. 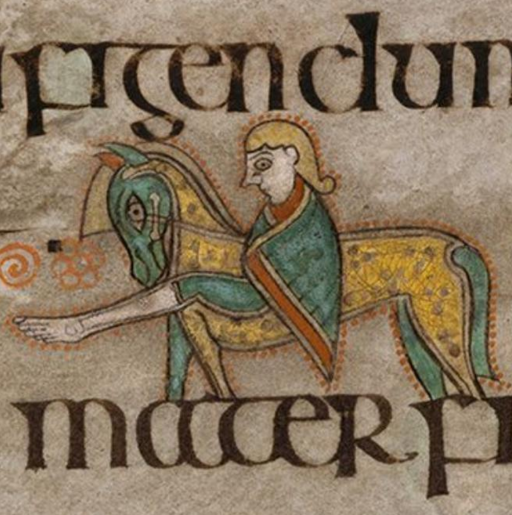 And so concludes another cyclocross season.  As ever thanks to my OldVelos web-editor, event organisers, fellow riders of the Munster CX League, teammates and especially photographers Seán Rowe and Michael Buckley. 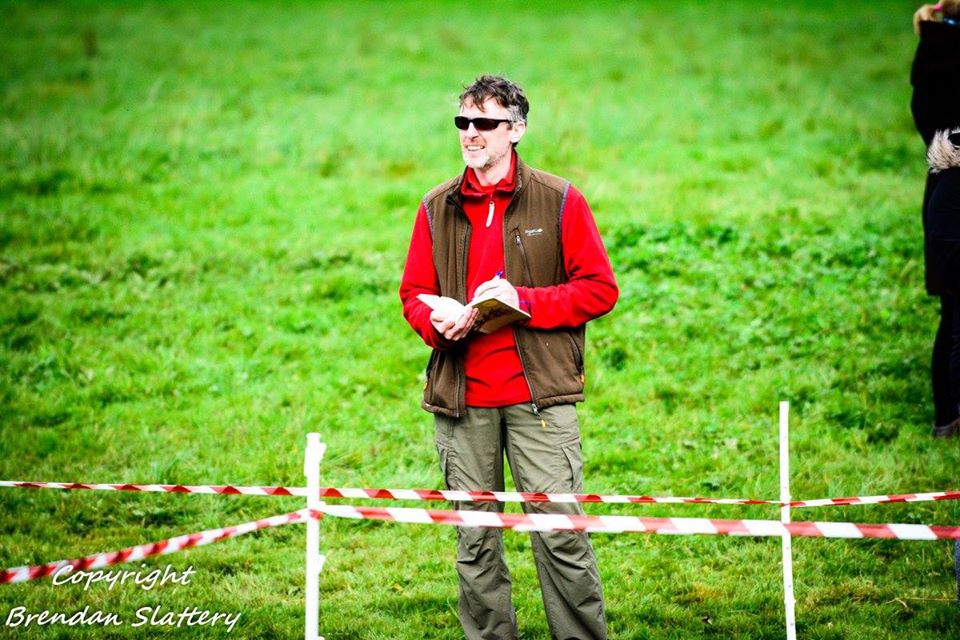 Delighted to be part of it. Dmitry, my 12 year old son, END_OF_DOCUMENT_TOKEN_TO_BE_REPLACED

Great weekend folks. First one for me, wont be the last and END_OF_DOCUMENT_TOKEN_TO_BE_REPLACED

Just wanted to say thanks for last Saturday, really enjoyed the day, END_OF_DOCUMENT_TOKEN_TO_BE_REPLACED