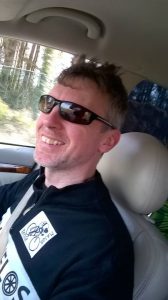 Team management at Ireland’s chapter of OldVelos  have reported unhappiness in the camp ahead of the Earthquake team trial, we can exclusively reveal.  Fielding two teams this year in the prestigious East Cork event management foresaw, some say encouraged, inter-team rivalry.  What they got was not expected.

It all began on the official OldVelos Whatsapp Group – it seems after all there is some modern technology this outfit embraces – when team selection was announced.  Riders were unhappy and not afraid to express it freely within the Group.

The rumblings began in Tralee, the county town of Kerry, from where the unrest spread to Cork City, Dublin and eventually Wexford, unlikely bed fellows some said.  “Galway alone remains silent” whispered one insider.

Team selection was announced the customary ten days before race day on the 10th of March.  Management, using the advent of spring to make a lazy pun, asked the two teams of “gambolling spring lambs” to keep training, or at least polish their bikes.

Ger ‘Mac’ McCarthy, incensed by his inclusion in the team responded “Lambs? To the slaughter more like”.  Unfortunately, the race director’s response to Mac “ah go mint your sauce” was sent to the full group causing further upset. 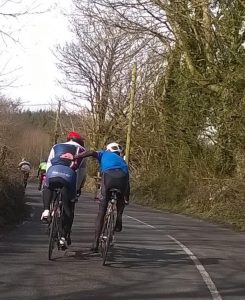 What followed was close to mutiny when others realised they too had made the team.  Brian ‘Boy’ Jones offered to forego his place to Wexford man Ken Cummins.   Jones’ message added his place could be taken by “anyone, anyone else, please help me”.  Cummins one-word response caused consternation. The word “Retired” never had such a devastating effect as Jones realised his inclusion was not a matter of choice.  Temporarily retired also are tandem titans John Shanahan and Gary Neff, just when the team were looking forward to pushing them up all the hills, again.

Dublin participant John Piggott – although participant suggests freewill – of the famous Bike Rack bicycle shop finds himself for the fourth time beguiled by OldVelos charm.  Misty eyed management remember fondly the note John left on his windscreen after his early departure from their last encounter. “HENNESSY, what did I ever do to you to deserve this?”.  Well whatever he did, he must have done it again as he too must ride this weekend.

This leaves just three others for the OldVelos B team – management choosing to interpret the deafening silence from Galway and Queenstown as a 100% commitment to the team, but for safety’s sake he’s left himself free as there’s no one else left speaking to him.

Meanwhile, in the OldVelos A team there are rumours of actual willing team membership, training even, ironman recces, races run, sufferfests, hyper hydration (of the wrong kind) and drooling over vintage Bianchis, Peugeots, Gazelles, Vikings, MBKs and Alan (for clarity Alan is a bike).  Team management has let it be known that the OldVelos A team are expected to win EQ19 and will be dressing them in his most garish gear.

Delighted to be part of it. Dmitry, my 12 year old son, END_OF_DOCUMENT_TOKEN_TO_BE_REPLACED

Great weekend folks. First one for me, wont be the last and END_OF_DOCUMENT_TOKEN_TO_BE_REPLACED

Just wanted to say thanks for last Saturday, really enjoyed the day, END_OF_DOCUMENT_TOKEN_TO_BE_REPLACED