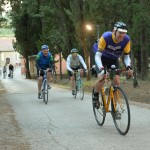 We took off around 7am, late enough to warrant just a gilet and arm warmers but just dark enough to appreciate the oil lit way up to the Brollio – I knew this was going to be my first test and thankfully I made it up. Upwards and onwards I thought, only to find myself slaloming down the other side without the confidence to speed up nor the sense to slow down. I was sure glad I was using a freewhe…el rather than fixed!
As the sun came up the clothes were shed and while the bike held up less could be said about my smartphone which between the dust and running strava gave up the ghost. That first foodstop is a joy as most people are still in good fettle and willing to smile, share a joke and even let you get at the grub.

Onto the next section and there came a point where the road was so rutted the leather on my brooks was shaken back into life and decided it was reincarnated as a bucking bronco. I felt pain I don’t want to again. Luckily everything was still working..on the bike..I wasn’t so sure about myself. As I ascended the next memorable hill just fast enough not to fall off, I noticed I was sitting on an ever decreasing saddle. My clever little alloy seatpost insert wasn’t up to the task and so began my interminable search around Tuscany for a 13 spanner.

The Ascenio climb is well known and feared but I hadn’t remembered a 5km ascent ahead of it. It was a lovely tarmac climb that rolled, twisted and turned and allowed you catch and be caught like a professional. Nice to meet a group of Aussies on the way up. Then Ascencio – luckily I met a guy on a beaut of Italian 1920’s craftsmanship and he riding a 44×18. He legitimised my dismount on the second climb. I should have had the sense to follow his lead up the next. It’s a surprising thing as a cyclist when you find your legs locked in a position that you can’t walk, but that’s what happened me after I overexerted my attempt to keep going against gravity. Oh dear this wasn’t very hopeful. The only way around it was to reprise the School of Funny Walks from Monty Python to stretch the legs. It worked!

So cycling is better than walking and that’s what I did for the rest of the trip. My buddies’ strava told us 89miles, 7300 feet, 6 and a half hours. I’m happy enough with that – our average speed somewhat less than the last man in the 1914 Giro d’Italia, but I’ll leave you to read all about that in Tim Moore’s Gironimo, my recommended read following anyone’s L’Eroica.