The Rise and Fall of the Burren CX Race

Part B, The Rise.

Hard man, Sweeney. A revolutionary.  Killer tattoos on his arms, Killarney adventure race under his belt.  He timed his return to the Munster Cyclocross league to coincide with the most technical course so far. 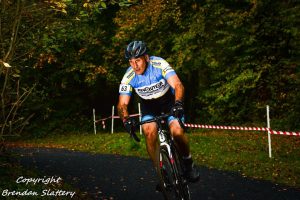 So technical in fact, that Sweeney and his ‘B’ race brethren were to be saved from its most daunting feature, The Fall.   Sweeney was not amused.  He had just traversed the Magcillycuddy Reeks with one leg tied behind his back, he had crossed ravines with his bike between his teeth, he had wrestled that famous dolphin Fungi into a three piece suit.  “I would have run down it anyway” he opined, “didn’t I try to ride it last year?”.

They’re known by different names, Sweeney’s group of riders: ‘The Brethren’, ‘the B-Specials’, ‘the TriBe’ or simply ‘the B’race.  True some will ‘A’scend, but many will not.  They’re happy that way.  They skirmish among themselves, try out the route before the A race decimates the surface and the last bit of traction.  They talk knowingly, even lovingly, of a course’s death traps and sweet spots.  They will later check lap times and know they went as fast as the second from last A rider.  What they love most however, is the technical challenge without the spectre of halting a galloping contender for the League’s red jersey.  They prefer it too, to come-away without broken bones.  This seemingly was the challenge given to the Clare men by the CX league.

“Don’t break any B-racers, but give them a good day out”.

“But we have a lovely descent amongst some boulders”

“Serve us up the severed heads or cracked carbon of anyone who can ride for more than an hour, just not a B-rider” 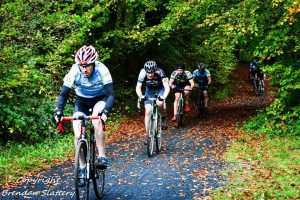 So, it came to pass that the Fall lay idle for the first few hours last Sunday in Ennis.  The Fall remained silent amongst its boulders.  The Fall waits. The Fall smoulders.

But, the Clare men wanted to scare the B-jaysus out of Sweeney and the ‘B’rethren nonetheless.

“If they can’t have the fall, we’ll give them the rise, darn it.” (They didn’t say ‘darn it’, but without the result of the Blasphemy referendum the Banner men didn’t want to offend anyone else, yet.)

The Rise is best witnessed when the race starts.  The whistle, the gallop, the gravel to the grass, the dash for the gap between the trees, the first fast earth, a right-hand dog leg, a root, a branch, brakes screech, eyes reveal the rise…and the big dirty, ugly, ancient and malevolent tree that sits in the way of the race line.    Milliseconds go slow when prudence tries to kill bravery. “Will I – won’t I?” won’t work when riding with the head and not the mind.  “Next time” the riders decree as feet unclip from SPD pedals. 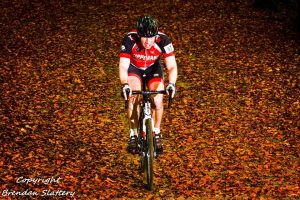 It’s at points like The Rise that the race untangles.  The fast fly away. The fit bide their time.  The followers follow new wheels when the last wheels slip from sight.  The course becomes familiar, the boards – the sand stretches –the steps down – the steps up –  the straights – around the outside – back by the start finish line – the gravel to grass – the gap between the trees – the dog leg – ah fluffed it again, The Rise.

Tune in another day for Part A – The Fall. 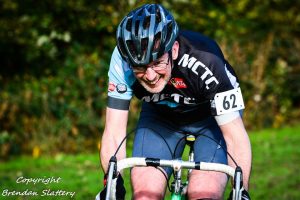