If Strava measured incredulity we’d be right at the top!

There’s not much the Strava cycling app doesn’t tell you: distance travelled, average speed, heart-rate, former lovers, it’s all there for the discerning cyclist and their followers.  But what if you’re not on Strava, what do you do then?  You do what you always did, enjoy the cycle.

And that’s what Charlie Delaney, Ger McCarthy and me did at the Ring of Kerry cycle last Saturday.  It’s what Brendan, Catherine and Conor Coffey, and friend Clodagh, set out to do too, but more of that ‘to-do’ later. 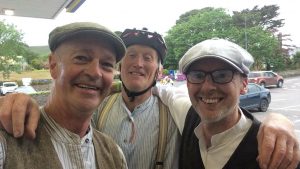 Charlie, cast from the same mould as the 1972 Kilkenny hurling full-back, doesn’t get Strava.  He just wants opposition.  His opposition this year was 106 miles on a family heirloom.  To him, Strava users are new kids on the block. Asked what gearing he had on his bike, he simply replied ‘one’. 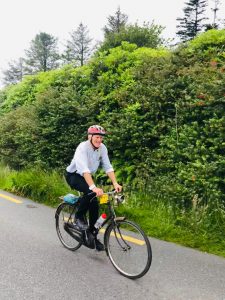 Ger ‘Mac’ McCarthy, is a veteran of the Ring of Kerry, or, well, at least he looks it.  He is a veteran of two Rásanna for sure.  In our company Mac is credited with the whole High Nelly thing and for insisting that we do it right.  Eschewing the plastic zipties to affix bike numbers, Mac opts for bailing twine.  Saddle leather a bit loose, Mac opts for the twine.  Keep the cardboard box on the carrier, tighten the twine.   Snapped underpants elastic, God knows.  However, asked what gearing he uses, quick as a flash, “46×20, it’s too high a gear, my heartrate is 160.”  How does he know? 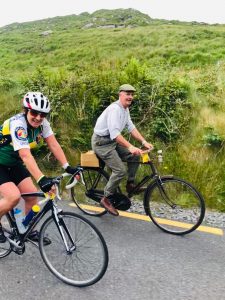 Like the boys, my bike is a bit old-fashioned too.  ‘Fashioned’ may be an extravagant term, as in some senses, these bikes were built for use and not beauty.  However, if Raleigh, had a soothsayer in their factory they would have dropped the ‘All-Steel Bicycle’ marketing line  for their high-nellys and simply written the “All-Time Bicycle”.  Collectively our bikes were about 230 years old, and, throw in the Coffey’s 1960’s Jack Taylor tandem and you can make that 280.   Collectively, especially thanks to Catherine and Clodagh, our average age is much younger than that! 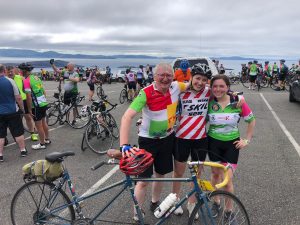 Younger or not, some would expect us to have more sense.  Riding the Ring of Kerry on vintage bikes, high-nellies and tandems, surely not?  But that’s the beauty of our enterprise.  We’re not riding the Ring of Kerry Charity Cycle, we’re enjoying it.  From the pre-event Whatsapp repartee (“I won’t be walking up Coomakista, I’ll be doing it on my hands and knees”) to the usual intention of a night’s sleep in advance and still imbibing refreshments at stupid o’clock.  The pre-event breakfast of porridge and tea, then dressing up in tweeds.  Choosing head gear and hitting the road. 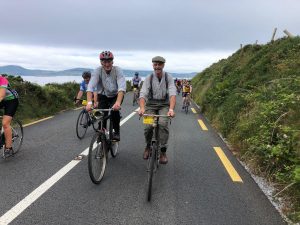 Oh the road!  The takes, then the double takes, as we push along the road.  Charlie wouldn’t like you to know, but my gear ratio is 46×17, and I’m good to go.  Mac, cautious as is his custom, feels his pulse and decrees ‘it’ll be a long day’.   Then, out of the blue, Charlie ‘No Strava’ Delaney starts talking about recently riding Lands End to John o’ Groats.  “Errah you start at the bottom and make your way to the top”.  We then discovered his trips around the country, overseas and even world circumnavigation.  I began to worry if Charlie did do Strava it might snap.

Meanwhile, up the road, Brendan and Catherine start talking tandem.  “Great day”.  “Yes, lovely”.  “Comfortable?” “Fine”.  “Should we have trained a tad more?”. “Yes”.  “Ok love, let’s enjoy the day”.  Father and daughter proceed, in that order, chaperoned by Conor and friend, Clodagh.  (Clodagh to be commended as a true Ring of Kerry cyclist: “Clodagh have you much training done for today?”  “Ahem, well yes, I did it last year!”.) 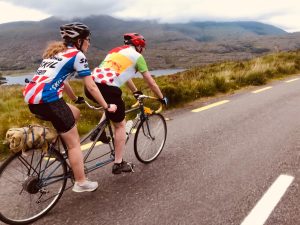 Killorglin came quick, the hill slightly slower; we stopped for diesel and bananas in Glenbeigh, only to find they gave them out free on the other side of the town (such are the little lessons of the Ring of Kerry).  Cahirciveen promised barn brack, buttered sandwiches and tea, and lo and behold a chance meeting with Anto Cronin and Billy Keane.  “Why are you doing it on high nellies, what’s the cause, what’s the reason?”  I suspect we left Billy more puzzled as we shrugged and said “no reason!”. 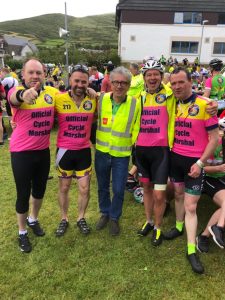 Of course there are reasons for everyone riding the Ring of Kerry; the funds and services provided to a friend, a child, a family member, someone in need, for us this year it was Kerry’s Recovery Haven, Cancer Support Group.   However, even in Kerry, there isn’t a service that could unpick our particular problem, riding the Ring of Kerry on High Nellys.  Anyway, they’d have to catch us first as we made our way to Coomakista.  This year we stopped to say hello to Charlie Chaplin, but true to his artform he never said a word.   At least the Coffeys were still speaking, if only to chief mechanic Paul Curtis, there was a problem with the tandem; but says Paul, “there are some other screws loose as well”. 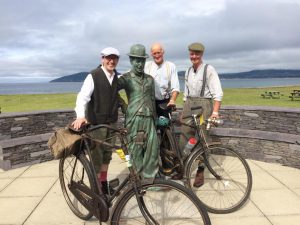 Mac and Charlie unloosened the reins for the big climb.  No it’s not a race, but you’ve got to push on when you’re lugging these machines uphill.  Joyous crowds at the top are always there to give a big cheer.   A bit like that at Breen’s when later you might as well stop, often accompanied by a look, and the words “where did you start, are you doing the full thing, ah you’re not”.   If Strava measured incredulity we’d be right at the top!

If Strava measured more than that we’d never be able to stop in Sneem for a drop.  O’Sheas as usual for a pint, photos and banter and the resolution to get to Kenmare in one piece.  The tandem and its outriders required more sustenance, resorting to soup and even more sandwiches and a promise of ‘we’ll see you in Neidín’.  We took off like a flying column, a passing cyclist commenting “who did we shoot?”.  Noticing a hole in my mudguard Mac quipped I must be a bad shot. 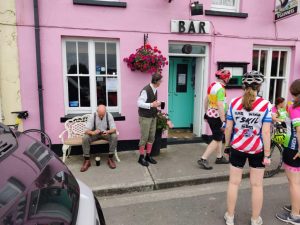 Molls Gap looms over Kenmare.  No this isn’t a geography lesson.  It’s sometimes hard to give the foodstop in Kenmare the attention it deserves because the miles that follow it loom so large.  I do remember inadvertently insulting a sandwich maker when she overheard me say I’d love a soggy salad sandwich. “Our sandwiches aren’t soggy” she says.  “No, I’d just like one, I’d like a soggy sandwich”.  “But our sandwiches aren’t soggy”.  You get the drift.

We drifted on.  Upwards.  Silence falls on the road up to Molls Gap, save for the occasional “ah £**%”, words of encouragement, a drumming troupe and altitudinally challenged but very encouraging DJ who tells you the top is just around the corner.  That’s not a  corner, it’s the side of a mountain.  Like Coomakista and its water from Filemore, the volunteers at Molls Gap provide a supply of water that any bottling company would be proud to call their own.   At this point too Conor Coffey I thank, representing the phalanx of marshalls, who kept us safe and appeared every time we chose to halt.  Alas the tandem was nowhere to be seen, it transpired a puncture needed mending, possibly some family fences too. 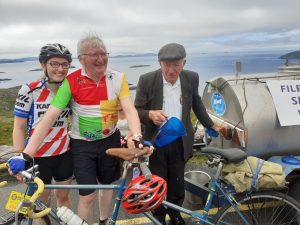 There is not a descent from Molls Gap.  Yes, the road does go down, then changes its mind and goes back up. Then down, then up.  Then down, then up, up.  Then down, then bridge, then up.  My buddies had gone on, or just their miserable rod brakes couldn’t stop them, but it was the meeting with Mike Greaney who amongst others. hopes to build a monument to the memory of Mike ‘Ironman’ Murphy that helped me catch them by Muckross.  “Where’s the tandem?” I was asked.  “At least a soup and a pint behind us (not knowing in fact of their mishap and Catherine speed-dialling childline).  “We’ll go on”.

So into Killarney we trundled.  My bike squealing for sympathy, Mac committing to different gearing for next year and Charlie discreetly uploading his ride on to Strava, anonymously.  Soon after the tandem did appear.  The Coffey’s handed it back to me with the words “thanksverymuchneveragain”.  Brendan then went straight to the bar for to purchase three pints and his daughter’s re-affection.   Clodagh, who had ridden the wave of bonhomie right into Killarney, and with her training session for 2020 complete, did the bicycle version of ‘mic drop’. 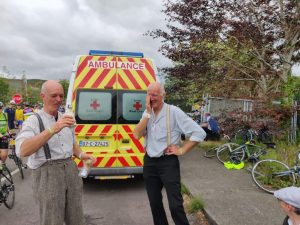 I won’t be churlish and give away Charlies Strava identity.  So here’s the facts it can never record:

Brendan and Catherine Coffey completed the Ring of Kerry on a 50 year old tandem. Father and daughter. In full sight of their son and brother Conor.  That’s something that can never be taken away (and something I’d love to do with my own daughter in time). 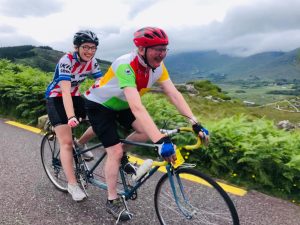 Charlie who rides his bike every day of the year and Clodagh who rides hers once a year had a lot in common.  You get on your bike, you ride, you look around, you enjoy.

As for me? I saved the spin straight onto Strava, promptly eliciting this response: “You’re mad. In a good sort of way”. 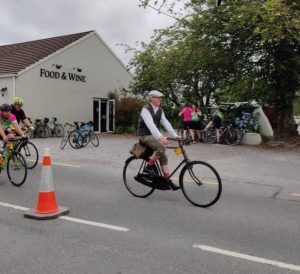